Melbourne’s first form of public transport from the suburbs into the city centre, and vice versa, were the railways; they had started in 1854. This was quite impres­s­ive since Londoner Robert Hoddle had only arrived in the Port Phillip settlement in March 1837 and was appointed senior surveyor for the new town.

Another serious public transport system started up in 1885 when the Melbourne Tramway and Omnibus Company grabbed a 30-year monopoly franchise for Melbourne’s new cable tram network. The first non-horse service ran from Spencer St/Flinders St in the centre of town, out to Haw­th­orn Bridge. It was a simple mechanism. The grip man/driver would grab one of the levers connected to the cable which in turn pulled the tram along the tram lines. When he want­ed to stop the tram, he’d let go of the grip on the cable and applied the brake. 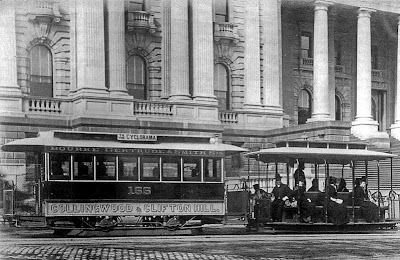 
The network grew quickly and within six years of the first cable tram being on the road, 1891, the cable tramway network consisted of spoke lines running from the city out into all inner suburbs. However, as the population moved further away from the centre of town, it became clear that the cable tram system became could not reach further and further out, without any limit.


In 1906, the first electric trams were being built, not to replace cable cars but to extend the ends of cable tram lines to more distant suburbs. They “topped up” the cable car system. The initial monopoly ended in 1916 and, appropriately, the cable network was taken over by the State government. The newly formed Melbourne and Metropolitan Tramways Board was now fully responsible. Almost immediately the MMTB started converting the old cable tram lines and the most famous of the new electric trams was the W class. From 1923 on, the W class was truly an Australian design, with compartments at either end closed by sliding doors and an open space in the middle. It was green, quiet, clean and wonderful.
* 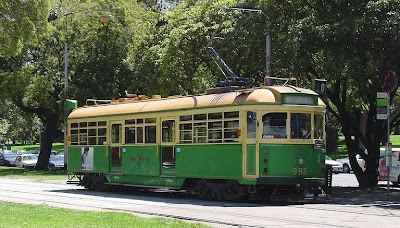 
The final cable tram bowed out in 1940, only a year after World War 2 broke out. In time the entire population was serviced by tram lines that all started in town and extended as far as the outer suburbs. When most other cities in the world ripped out their trams and substituted smelly, smoke-filled buses, Melbourne kept her elegant, green ladies that were able to glide graciously through the tree-lined streets without petrol.


Of course Melbourne bloggers are very proud of their trams. I recom­mend you read “Review: Time-line history of Melbourne's Government Cable and Electric Trams and Buses” in melbourne on transit: April 2006.  And the beaut High Riser blog. Even foreigners unfavourably compare their own tram system to Melbourne's eg Poneke who wrote Bumblebee trams roll proudly through Melbourne while Wellington bumbles timidly on.
*
Today Melbourne's trams are still petrol-free, but they are no longer green and are alas both ultra-streamlined and privatised. It feels like our city was taken over by foreign trams. In any case, there are other important public transport issues to be considered, as discussed by Hailing From Georgia blog in Guidelines for Effective Mass-Transit, discuss. However my favourite place to take overseas visitors is still a 3-hour tour in the splendidly refurbished 1927 Colonial Tramcar Restaurant.
* 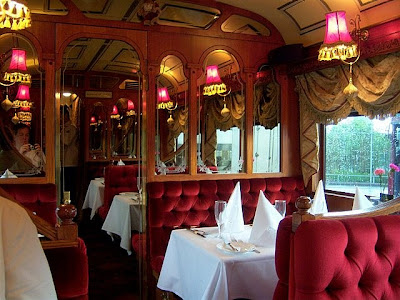 Thanks for visiting my blog. I'm glad I found your because I share your interest in architecture and history.

Regarding your enquiry on my blog. Penshurst is a southern suburb of Sydney, next to Hurstville. There are a lot of Federation houses there because the railway station opened in 1890 and development followed in that era. I don't know a lot about Queen Anne style architecture but West Maling certainly is a magnificent house.
Sydney - City and Suburbs

Some interesting information about this history of trams in Melbourne! I experienced riding in trams for the first time when I lived in Poland. I traveled on them almost daily and found I enjoyed them much more than buses. So I'm very much in favor of them!

The Age (10/8/2010) wrote the following: "The W-class trams, big and clunky, patriotically green and gold, were born and bred in Melbourne. Seattle and San Francisco have bought some, and Christchurch. Savannah bought one and now there are nine W-class trams in Memphis, with expansion plans for more."

The irony is that, unless something is done soon, Memphis may end up with more W-class trams than the Yarra village that invented them. Our W-class trams have proved so popular in the US that many have evolved from tourist attractions to everyday transport.