Australian Bandstands in the Federation Era

Who in the blogging world might be interested in Victorian-era bandstands? Leaves of Grass blog has the most amazing coll­ection of Brasil’s bandstands I've seen. They had various shapes, colours and building materials, one more splendid than the next. Alas she did not include any building dates. Carol­ine's Miscellany examined the source of Taunton (1895) and Bridgwater (1908)’s late C19th bandstands. Her examination of British sites inspired my search for Australian equivalents. Clueless in Boston presented a truly lovely image of Parkman Bandstand 1912 in Boston Common.

The best collection of British Edwardian band stands is in Rose C'est La Vie blog. Rose loved the bandstands because "they're whimsical in design, sometimes oriental, sometimes wedding cakey, and evocative of the innocent pleasures of promenading on a fine day and settling down on a deckchair to listen to a very jolly brass band, a military orchestra, local musicians."

In my state, Victoria, Johnstone Park Geelong was created in March 1872. In December that year, the first band concert was held by a local military band. Then an octagonal wooden bandstand was built right in centre of the park as early as November 1873. As soon as WW1 ended, a war memorial was built in the centre of the park as a memorial to the fine young men killed in battle, and the old bandstand was modernised. 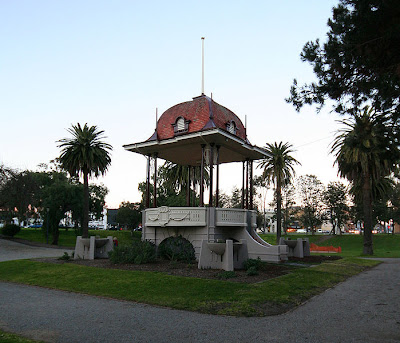 The late 1870s saw the discovery of deep leads of gold in the Creswick region and these underground mines brought further wealth to the town. This enabled solid public buildings to go up, as well as the development of public open spaces, like Park Lake. Creswick Jubilee Bandstand 1879 was erected to celebrate Queen Victor­ia's Diamond Jubilee. It dominated the town's open area in the centre. 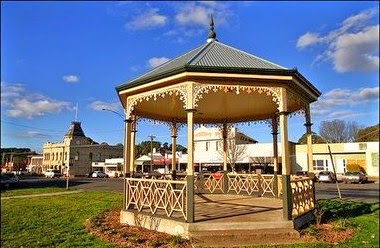 Oppos­ite the Beaufort gardens was an octagonal band rotunda 1903, build to commemorate Queen Victoria’s Reign. The Beaufort rotunda was crowned by an octagonal lantern with iron-grille décor­ation and a four-faced clock. Queen Victoria’s death created a virtual cottage industry. The rotunda built as her memorial and opened in Buninyong in 1901 was the earliest memorial in this state, and preceded the band­stands built in Beaufort 1903, Bendigo 1903, Geelong 1904 and Melbourne 1907.

An attractive and slightly differently shaped bandstand was built in Burra in 1911. This small South Australian town wanted to honour King Edward VII. 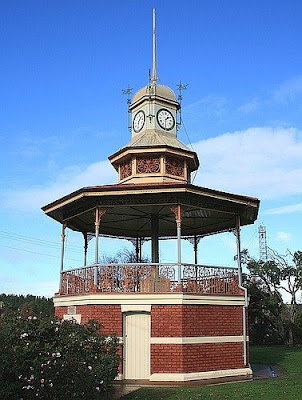 Sturt St Ballarat already had beautiful blue gums, grown for 45 years before the first bandstand was designed. By 1905 the cent­re of Sturt St looked like an interlinked group of lovely gardens. The position was perfect. Queen Alexander Bandstand 1908 was named by the Duke of York after his mother, wife of King Edward VII. It was an innovative band stand de­sign, using a polygonal form topped by a Moor­ish onion dome. The bandstand had very fine wrought ironwork that, approp­riat­e­ly, included musical motifs. Built during the heyday of the band move­ment, it is now one of the few remaining examples of Edwardian band­stands in Victoria and reminds us of a popular form of outdoor entertainment.

Examine in Your Brisbane blog for an amazing New Farm bandstand that looks like a small Edwardian house. The park was taken over in 1913 by the Council, and they added this handsome bandstand and a kiosk. It has more gables and more timber lace work than my grandmother's house.


Ballarat's Titanic Memorial Bandstand 1915 was unusual example of creative bandstand design in rural Australia, an exotic composition with orientalist roofs. Designed by local architect, GW Clegg and man­u­factured at a local foundry, the Titanic Bandstand has survived well. It was created as a memorial to the SS Titanic disaster, particularly to those musicians who heroically continued playing as the unsinkable ship sunk. 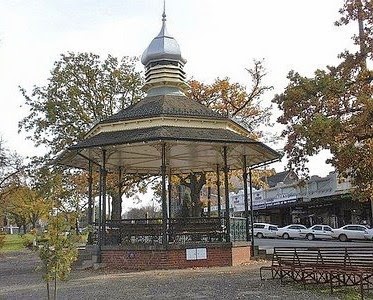 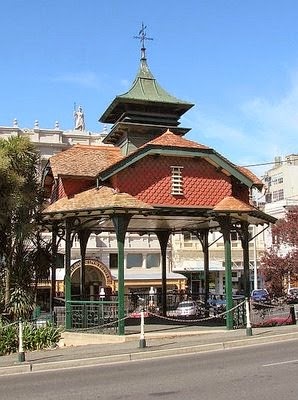 Since the royals were 15,000 ks away and there were very few Australians lost on the Titanic, we might ask why there was a rush to spend community money on bandstands? Listening to music played by the town band was a popular form of amusement in the Edwardian era and most councils thought the money would be well spent. And perhaps there was a pride in nationalism, in quietly and democratically uniting the Australian states into one Federation.

Or the connection to WW1. The Port Melbourne war memorial is an octagonal brick band stand with a metal roof and steps on the north side. An inlaid marble tablet from the Port Melbourne Women's Welcome Home Committee honours the gallant Australians who fought in the Great War 1914 - 1918.

The only bandstand and park image I have from the turn of the century was taken in Hyde Park Sydney. 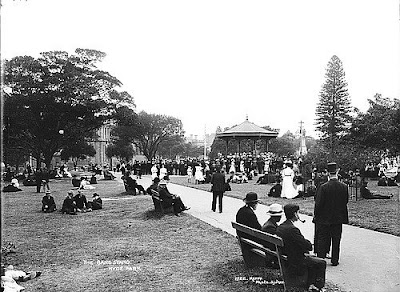 These late Victorian and Edwardian structures, within their well-developed gardens, have now been given heritage protection. At the time, the bandstands, iron seating and garden displays must have given great pleasure to ordinary families, every summer.

They're all beautiful Hels.

Regarding your comments on my blog. The Kogarah Community Centre was the old Kogarah Post Office.

My St George blog actually contains photos that originally appeared on the Sydney - City and Suburbs blog. It's like the best of the best of the St George area because that's where I grew up and still live today. You can find those photos on my main Sydney blog, sometimes with more information, by doing a 'Search Blog' on Kogarah at the top or following the Suburb 'Labels' down the right hand side 'Suburbs - kogarah'. You can leave comments on the Sydney pages because I keep track of them.
Sydney - City and Suburbs

Hels,
There is an interesting Band Rotunda on the foreshore in Port Melbourne. It was built with funds raised by the local Womens Welcome Home Committee for the WWI soldiers returning to the nearby piers.

It was built in 1918 just before the end of WWI making it one of the earliest WWI memorials in Australia.

Here's a link with a photo and the text of the plaque.

Hello Hels,
First of all you have a great blog and I am amazed with your bandstands! So beautiful!

I am glad with your nice words and the link to my blog. I appreciate it very much!
Unfortunatelly I don't have the date when them were built...

I am glad I found you and I will come back soon.
Have a nice week ahead.

Thanks everyone. Since I have added a link to Rose C'est La Vie's postcards of Edwardian bandstands, beautiful examples have been popping up here and there. Music in the open air must have been a nearly universal pleasure for turn of the century citizens.

David, I added a link to the Port Melbourne bandstand. It isn't as gorgeous as some of the others, but its link to WW1 was very important to my story. Thank you!

Can anyone give me some info about Geirge W Clegg who designed the Titanic Bandstand in Ballarat. Did he do anything of note. He would be a long lost cousin parents originally from Ireland.

The Victorian Heritage Database gives the following information on your cousin:

George William Clegg was born in Ballarat in 1870 and was articled to the architectural firm of Tappin, Gilbert and Dennehy from 1885-89. They had offices in Melbourne and Sydney as well as a Ballarat office run by Charles Gilbert. Gilbert and Clegg later formed a partnership, which was subsequently dissolved and Clegg formally joined the Ballarat based firm of Kell and Miller in c1898.

From then until c1905 the partnership of Clegg, Kell and Miller designed a wide range of buildings throughout central and western Victoria. These included churches, shops, grandstands, warehouses, hotels, houses, hospitals, banks and public buildings such as halls and mechanics institutes. The firm later formally became Clegg and Miller, then Clegg, Miller and Morrow, and finally Clegg and Morrow. Throughout the various personnel changes Clegg was the designer and he was also an accomplished draftsperson.

Now you can look up work by Clegg and Miller or Clegg and Morrow of Ballarat :)
Hels

For a very nice example in New York, see the blog NOTED:
http://architecturalwatercolors.blogspot.com/2011/04/old-bandstand-central-park.html

The architectural firm Olmsted and Vaux, together with their English assistant architect Jacob Wrey Mould, were very involved in bandstands for New York’s Central Park. Mould designed a colourful Moorish bandstand that Olmsted wanted to use as a floating band shell on the Lake. This hexagonally planned, cast-iron pavilion with an opulent golden dome, was alas later torn down.

Dear Hels,
Thank you very much for the link, and these Austrailian bandstands distill an age, don't they?

Yes indeed. Even though I have selected bandstands by the common date of their construction (1890-1915), each one is specially designed.

I have added a reference to the Burra S.A bandstand because the wrought iron is more elaborate than usual and because the rotunda has a novel silhouette.

Hels, the link I provided on my Watsons Bay bandstand post gives a history of Robertson Park. It says that "bandstand was built of wood on a concrete foundation with a wood shingled roof" so I'd say it most likely looks the same as when it was originally built.

thank you for that. I should now look at the development of bandstands after Federation and after WW1.

Hi Helen,
I've just got some great information from your bandstands blog and dropped in to say thanks, and, how do I cite your work?
I'm working on the rebuilding of the Warburton bandstand, built 1914-1915, a simple wood structure that housed the fire station below the deck.
Thanks again,
Karen

My post is called "Australian Bandstands in the Federation Era";
the blog is called "Art and Architecture, mainly" and the
URL is http://melbourneblogger.blogspot.com.au/2009/07/australian-bandstands-in-federation-era.html