Cloudehill is a 2 hectare garden in the Dandenong Ranges, just on the edge of suburban Melbourne. Waverley Arts Society blog wrote Cloudehill Garden was a work of art. In the 1890s the Woolrich family cleared bush in Olinda to create a working fruit garden. Then in the early 1920s, they established Rangeview Nursery and developed a cut flower and foliage farm. The family prospered for many years, however in 1962 bushfires devastated the farm and the business languished.

Jeremy Francis had long sought land in the Dandenongs to create a garden. He was introduced to the owner Jim Woolrich, the last of the second generation of the family, and learned much of the history of the nursery trade. After Jim's death, the family offered the property to Jeremy and in 1992 Cloudehill was established. The new owner decided to create a Garden of Eden, based on the established design principles that arose out of Arts and Crafts gardens. Everything was planned: the paths, the trees, the flowers, the sculpture etc. 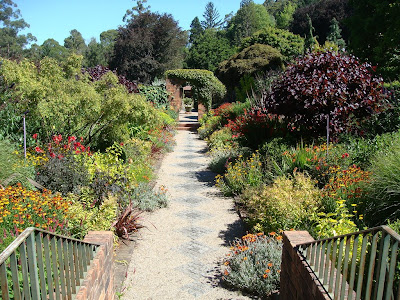 I'm not familiar with garden design principles, so Katya at Bosco Parrasio blog was super.  “Cloudehill is inspired by the famous arts and crafts gardens of England: Sissinghurst, Hidcote, Tintinhull and others. These, in turn, are derived from the renais­sance gardens of Italy such as Villa D'este and Villa Lante. Our green theatre is a tribute to those magnificent Italian hill gardens. Of course Cloudehill's location, with its gentle slopes, the dramatic forest to one side and exhilarating views to the mountains, provide plenty of inspiration and the placing of art works into the gardens give a contemporary twist to a classic design”. With the daffodils, she said, we see the change from the structured to the naturalistic.

See photos of Sissinghurst gardens, created in the 1930s by Vita Sackville-West and her husband Harold Nicolson, in Gardens of a Golden Afternoon. Examine Bishop's Gate which connects the Tower Lawn to the White Garden - the plants are not Australian, but the vistas and garden architecture are familiar.

Intelligblog noted that Cloudehill was laid out in about 20 rooms or garden compartments, all on different levels and linked by paths. Each compartment has its own theme, but there are also integrating elements, like brick and stonework, lined by herbaceous borders and clipped hedges that make each compartment feel an essential component of an integrated whole. Water features and art pieces were the modernising highlight for Nicholas. 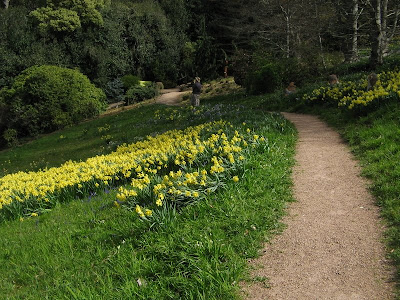 VARPORIUM CENTRAL blog suggested “to see the perennial borders at their best on a clear morning after rain with the mist rising and melting is nothing short of miraculous. Flora Aik blog was just mesmerised with the estate. 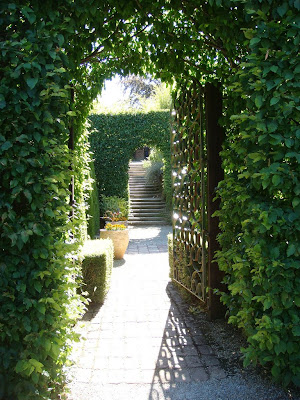 If there is any disagreement, it is over the sculpture. In a new experimental part of the garden where it is too steep to walk, the new owner has used C17th Italian commedia dell'arte figures by Lazlo Biro to create what he hoped would be a really bold element and a wonderful focal point. Perhaps C17th gardens in northern Italy really did have lawned spaces where commedia dell'arte troupes played. But for me they didn’t fit into C21st Melbourne. The hugs garden pots, on the other hand, were wonderful.

to Katya over at Bosco Parrasio:

Thanks for your material, Katya. I created a link to your blog and explained clearly that I am totally unfamiliar with the idea of formal garden designs. My idea of a gorgeous garden is a] it smells nice, b] it has still or moving water and c] there are plenty of fruit trees.

a newly found fan of yours
Hels

Thanks for your comment. To answer your question about garden rooms there are essentially confined spaces within a garden. Typically with walls of greenery rather than masonry, though they do vary. The Edwardian period (1900-10) saw a revival of the formal garden, in opposition to the naturalistic garden that had held sway for the past 150 years. Anyway, you have got me thinking I should write an entry upon the garden room in its many guises across the history of gardens.

maybe we can learn from natural landscape form to have beautiful idea for our garden.great posting, i will link to you soon..thanks

Hi Hels
Varporium Central!!! Haven't been there for years...created it one dull day and promptly lost interest, so it's a shock to see someone found it.

The spookiest thing happened today. I stumbled on Art Inconnu this morning and my partner and I hd breakfast as we trolled through the pics. I had cause to pause at the George Lambert entry there and flicked on to the Comments page where I saw your entry on him. I put your blog into Favourites with a view to checking it out later. Lo and behold I find a link there to my article on Cloudehill!!!!

Anyways ...to answer your question on Cloudehill. I haven't been there for six months despite passing it most everyday, but it has changed. Stuff has grown. Some things have been removed (big tri colour beech in the nursery) and the Jeremy has been tireless with the place. It is his life entirely and is a great and glorious thing.

The recent fires caused no harm though they are a constant, wearying tap on the shoulder during the season.

I am desperate for a garden makeover! I am self employed contract career for Barnardos, which means I give short breaks to children/young people with disabilities at my home. I will also be giving a home to a young person soon as a long term placement. My garden is used but could be so much more enjoyable for the young people and we could learn things together about our environment and about ‘going green’. I live semi-rural and are embarrassed to say I don’t know where to start. It would be life changing for the young people and myself to sort my garden out. I LIVE IN HOPE YOU COULD HELP. Hopefully.
garden design sydney

Thanks for your comment, Matthew. I'd suggest that you should contact Cloudehill directly at 89 Olinda Monbulk Rd Olinda, Victoria or via info@cloudehill.com.au

I realise you are in Sydney but they may has some very useful advice and experience. Good luck with your important work.