The students were discussing the over-the-top nature of Vict­or­ian public ar­chitecture. What we needed was an architectural ex­ample where Vic­torian optimism and confidence combined with pow­erful historical symbolism.

The baronial style was a C19th revival of Scottish architecture tak­ing its inspiration from older, historical buildings. Although the revived style was largely used for private country houses, Scottish architects (or perhaps their clients) liked to incorporate crenel­l­ations, turreted bartisans, oriels and hewn stone in public buildings as well.

Inverness Town House, on the corner of Castle Street and High Sts, was built between 1878-82 by the architects Matthews and Lawrie. This building replaced the Old Town House, which was built in 1708 as the Inverness home of a noble family, became the Burgh Town House in 1716 and was demolished in 1878. 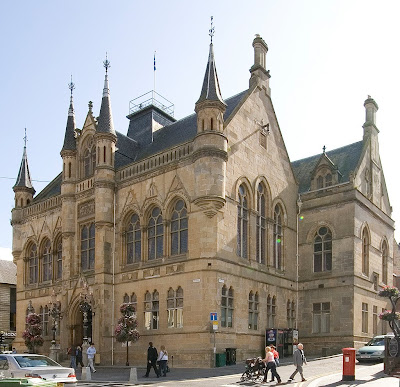 Wherever in Inverness a person stands, he/she immediately notices the slender towers and turrets corbelled out at the corners and over the from door, slate roof, pierced parapet, fenestration and decorative bartisans ie over-hanging, wall-mounted turrets projecting from the walls of medieval fortifications. Ornate cast-iron lamp poles, which look lovely but don’t suit the building, stand on each side of the front entrance. 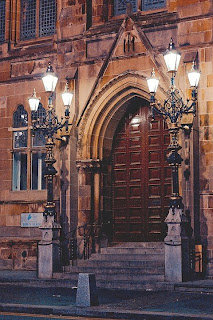 The interior is impressive, with 13 very grand chandeliers. There is an imposing staircase rising from the entrance to reach the most important rooms. The Town Hall, which was meant for the public, is panelled with painted ceiling and stained glass windows. The Council Chamber is wood-panelled and features fine stained-glass windows, three of which were designed and installed to commemorate Queen Victoria's Diamond Jubilee. Some of the portraits displayed in the Town House include provosts who worked in Inverness as far back as the C17th. 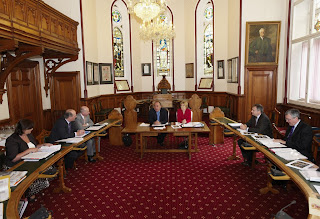 
The Town House was the home of Inverness Town Council until the 1960s. Since then it has been used only civic functions and musical performances. Now I must examine the Melbourne Town Hall, completed in the same decade as Inverness’ Town House.
Posted by Hels at 14.5.09

When I was a student in Dundee there were quite a number of this type of building around, including the local museum. I always thought that they were reminiscent of some of the medieval buildings in the merchant towns of northern Europe, just across the North Sea.