Chris Bellinger1 set me thinking. Now I have to ask if it possible that John Longstaff, as shown in his painting Gippsland, Sunday night, 20th Feb 1898, was really influenced by Europe’s Romantic tradition in art?

Romantic art helped to form our modern notion of what it meant to be an artist, at least from the end of the C18th until the middle of the C19th. I am thinking of images of people cling­ing to a raft in a heaving ocean or Alpine waterfalls smashing over rocks. The threats to the humans in these situations were totally outside their control, so the Romantics saw the crises as very real threats of annihilation. How correct this turned out to be in the case of the Australian bushfires.
* 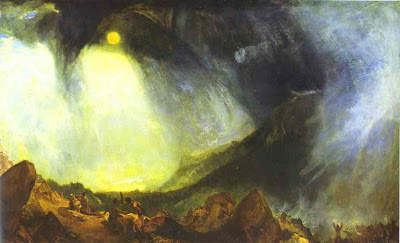 Turner, Hannibal and his Army Crossing the Alps, 1812.

Consider William Turner’s Hannibal and His Army Crossing the Alps, 1812 (The Tate); the forces of nature in this work led to a pessimistic res­p­onse in both the artist and the viewer. The weather was huge and the people were like puny ants. And examine the devastation in Caspar David Friedrich’s The Polar Sea, 1824 (Kunsthalle). Tellingly, Polar Sea was known as The Wreck of Hope, in reference to a shipwreck from a failed North Pole Expedition.

Cardinal Wolsey's blog presented an amazing painting of the icy Thames in the 1680s: The Frozen Thames by Abraham Hondius (The Museum of London). Although a dramatic presentation of nature's force, I would not normally have included the work as Romantic, since it looked as if the Frost Fairs were activities of real enjoyment. However note Cardinal Wolsey's line "many communities in northern and eastern Europe were abandoned to the advancing ice". This was not real enjoyment at all; it was a nightmare.

And I found another blog that was very interested in awesome weather conditions in southern England in the early C17th. Mercurius Politicus located the frontispiece of a booklet called The Cold Yeare: 1614. In it, the author wrote of "a deepe snow: In which men and cattell have perished, To the generall losse of farmers, grasiers, husbandmen, and all sorts of people in the countrie; and no lesse hurtfull to citizens". The cover depicted precious cows and horses falling into treacherous snowy caverns. Life was difficult, dangerous and often fatal.

Romantic art had elements that were common across English, Ger­man and French art of the period: a] an intense identification with nature; b] valuing emotions and imagination over cool reason; c] a sense of impending tragedy; and d] a total inability of insignificant hum­an beings to control their future, in the face of powerful, natural forc­es. Although I am not very interested in Romanticism’s nostalgia for the natural simplicity of "some medieval past", we can certainly agree that Romanticism strongly contrasted with the refined, intellectual nature of Neo-Classicism. 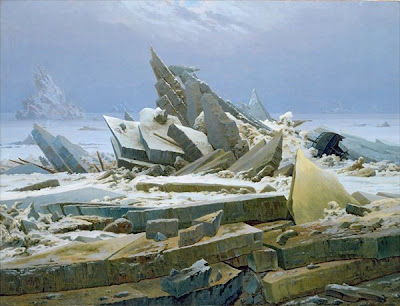 I had never thought of Australian art having Romantic influences. Our history has not been interested in making a stand against the Enlight­enment’s aristocratic social and political values. Furthermore we don’t seem to have ever been very involved in the ideas and styles of Johann Goethe or William Blake. Yet Longstaff’s citizens of Gippland were as helpless in the face of rampant Nature as were the victims in Turner, Friedrich or indeed Théodore Géricault.

As were the workers in Arthur Streeton's Fire's On, Lapstone Tunnel 1891 (Art Gallery of NSW). While blasting through enormous rocks for new railway lines in the Blue Mountains in 1891, fire broke inside the tunnel. Workers who could save themselves ran outside and waited. They understood that their colleagues inside would instantly die of burns and suffocation. 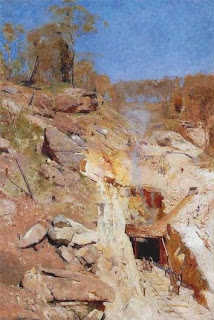 Gosh A whole post in response to my comment! thank you for a very informative response and I shall be researching more on the romatics so the other site yoou mention was usefull as well.
Have just stated a 6ft by 4ft painting on mountaints and will be posting the images of this as it progreses, this is part of my fine art degree and the finale project!