"Notes on a Scandal"

A film starring two mature actresses in tough emotional roles is a film worth seeing. The blog called The Balcony is Closed [1] reviewed one such brilliant film:
“I saw Notes On a Scandal a week or so ago, starring the succulent Cate Blanchett and dazzling Judi Dench. Talk about the year of the woman – here are two great roles for two actresses to really strut their stuff. And not in some chewing-the-scenery-I’m-trying-to-win-an-award kind of way.
Judi is Barbara, the older, rumpled, mean and rather strange history professor at a London school in a less than desirable neighborhood. Cate is Sheba (short for Bathsheba – hmmm) the bourgeois bohemian new art teacher who has decided to leave her housewifely duties behind and teach. Like an unsuspecting butterfly, Sheba falls into the web of Barbara, and what begins as a friendship turns into a scary, freakishly codependent relationship built on emotional blackmail.I am not going to give away what makes Sheba give into Barbara’s Single White Female ways, but trust me, you can’t turn away.
What a great foundation! Lots of tension, lots of ambiguous morality, and lots of London. Who could ask for anything more?Both women are excellent and portray characters that are sympathetic and dastardly at the same time. Only these two could elicit such a range of reaction from the viewer, I think. I can’t say I’m going to see this movie again and again, but I did enjoy the story and I love stories without tidy endings.”

But let me add to this blog. Barbara’s thinking about the new young woman teacher went well beyond sisterly friendship. Sheba started the story with enth­usiasm, energy and youth; she was almost a wide-eyed ingénue. Well not quite, in the light of her behaviour with a teenage student. But Sheba’s face told the story: pleasure, ambivalence, uncertainty, fear and finally complete comprehension in the face of sneaky blackmail.
There are not many actresses who could carry off these roles: Blanchett and Dench, to be sure; Emma Thompson for whom I would give a kidney; Helen Mirren, Toni Collette, Meryl Streep and Claudia Karvan.
**
[1] http://thebalconyisclosed.blogspot.com/ 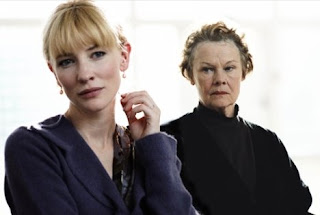 Thanks for taking note of the post on the Balcony - a blog left for dead quite awhile back, but your enthusiasm might just revive it!