Man Ray: the most expensive art photo at auction ever? 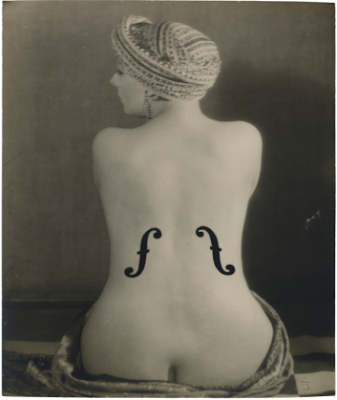 Violon d’Ingres 1924
starring Kiki de Montparnasse, Christie's
to be auctioned in New York in May 2022
The eldest of 4 children, Emmanuel Radnitzky, was born in Phil­ad­el­phia in 1890 to East European immigrants. When Emmanuel was 7, the family moved to Brooklyn, where both of his parents worked as tail­ors. In 1912 the family changed their last name to Ray due to incr­easing anti-Semitism in the US eg they faced quotas on en­rolment and teaching positions in universities. Emmanuel became Man Ray
While Ray’s parents expected him to go to university after Brooklyn Boy’s High School, he dreamed of being an artist. And so, much to their disappointment, he turned down an architecture sc­h­olar­ship. Nonetheless his parents helped Ray turn his bedroom into a studio.
While living in New York, Ray frequently visited Stieglitz’s 291 gallery and took classes at the National Academy of Design and the Art Students League of New York. Then, in 1915, he met the artist Marcel Duchamp. The two forged a tight bond, discovered the New York Dada movement and collab­or­ated together. But if Ray’s friendships with male colleagues were mutually supportive and a source of positivity, his relationships with women were not. 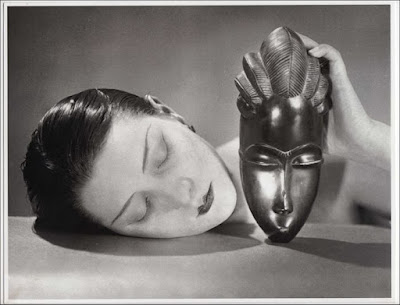 Noire et Blanche 1926
auctioned in Paris in 2017
In 1921 at 30 Ray was drawn to Paris. There he met and made friends with Salvador Dali, Pablo Picasso, Ernest Heming­way, James Joyce and Gertrude Stein. He also met and loved his assis­tant Lee Mil­l­er, a talented photographer. Theirs was a tumultuous affair that inspired Ray’s readymade works of art.
Ray was showing a provocative attitude toward women in some of his art. And yet, many of the women in Ray’s life, including Miller, loved him long after their romances ended. Such was the case with the nightclub singer, actress, painter and model Alice Prin/Kiki de Montparnasse. In the portrait Le Violon d’Ingres 1924, Montparnasse had a violin’s characteristic f-holes superimposed on her back.

The artist's natural affinity for the Surrealist style. Even before the movement had coalesced in the mid 1920s, his work was influenced by Marcel Duchamp with its Surrealist undertones. He would continue to draw on the movement's ideas throughout his life and was very im­portant in popularising Surrealism with others.

Back in the U.S in 1940, Man Ray stepped off a boat in New Jersey, safe from the Nazi occupation of France. Man Ray had been a signif­icant contrib­utor to Dada, Surrealist and avant-garde move­ments.

In 1948, Ray met Juliet Browner and fell in love, marrying in a double wedding with their close friends, artists Max Ernst and Dor­o­thea Tann­ing. The couple returned to France in 1951, where they re­mained toget­h­er until Ray died from a lung infection in 1976. He was buried in Cimetière du Montparnasse, Paris. 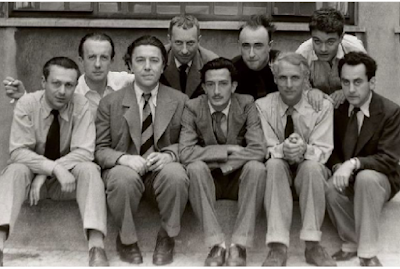 Surrealist brotherhood
Top row: Paul Eluard, Jean Arp, Yves Tanguy, Rene Clevel.
bottom row: Tristan Tzara, Andre Breton, Salvador Dalí, Max Ernst, Man Ray
Credit: theartstory
Now leap forward to May 2022. Man Ray’s Le Violon d’Ingres 1924, a famed photograph of a nude woman’s back that’s overlaid with a violin’s f-holes, will be auct­ioned and should fetch $5-7 million!! If it sells within that range, it will become the most expensive photograph ever sold at auction.
The famous photograph, depicting his muse Kiki de Mont­parnasse, was rare since it was made when its corresponding negative was first produced. This made it very valuable for photographic experts.

The current record for a photograph by Man Ray was set in 2017, when an original edition of Noire et Blanche 1926 sold for $3 million in Paris Christie’s (see photo above). The Violin photograph is now the top lot to be off­­ered from the holdings of New York collectors Melvin and Rosa­lind Gersten Jacobs, fashion retailers who had deep ties to Surreal­ist circles. The Jacobs bought Le Violon d’Ingres directly from Man Ray in 1962, and kept it. The live sale will be de­dicated to the Jacobs’ Surrealist art collection at Christie’s NY.

Rosalind, a long time Macy’s executive, died in 2019 at 94. The coup­­­­le’s daughter and executor, Peggy Jacobs Bader, said that the works being sold reflected her parents’ playfulness. Highlights from the collection, including works by René Magritte and William Cop­ley, will tour London, Paris and Hong Kong before finally returning to New York. There they’ll be on view at Christie’s Rockefeller centre space, before the May auction.

Man Ray works have sold well at recent auctions. In 2021 200+ objects by Man Ray and artists in his circle was sold from the es­tate of his late assist­ant, Lucien Triellard. Held at Christie’s in Paris, the sales total­led $7.1 million, despite claims from the Man Ray Trust that some art objects were obtained illegally. 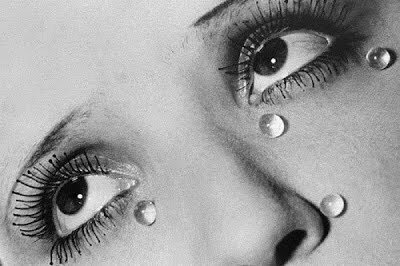 There is an irony here. Although Ray worked with different media, he saw himself prim­arily a painter. His American legacy was his photograph­y, which annoy­ed him – even when he died, photography was still considered a 2nd-class art form. Still Arthur Lubow, in Man Ray: The Artist and His Shadows 2021, str­uct­ur­ed his book around those who were closest to Ray i.e photo­grapher-gallerist Alfred Stieglitz and lovers Kiki de Mont­par­nas­se and Meret Oppenheim.  What a talented, well connected man Man Ray was.
Posted by Hels at 14.5.22

Provokative or not, I rather like the photo of the woman's nude back.

He had happy, long term relationships with women, so why did he not find them mutually supportive?

Kiki de Montparnasse had the perfectly-shaped back and the smoothest skin for a portrait of a violin, doesn't she? Unfortunately in most of her photo portraits, she is totally covered in 1920s makeup and clothing.

of course you do :) But do you have the $5-7 million that the auction should achieve?

Good question! Man Ray married his first wife, Belgian poet Adon Lacroix, in 1914 and stayed together for years. He was with Kiki de Montparnasse, an artists' model, throughout the 1920s. He had an affair with photographer Lee Miller throughout the early 1930s and a wonderful affair with model Adrienne Fidelin until the Nazis took over France. He met and married dancer/model Juliet Browner in New York and stayed together for life. Note these were all talented women in the arts! And note that all of his photo portraits were of women, except when he used himself as the model.

I have no idea why he only found men mutually supportive.

I don't like the photo but I do like the extraction of Man Ray from his original name. Man Ray certainly moved in exalted circles.

spot on! Man Ray’s art spanned many media, and for decades he was influenced by Cubism, Futurism, Dada, Surrealism, and commercial art. Early friendships started with Marcel Duchamp and Francis Picabia, and Ray was inspired at the 1913 Armory Show featuring Pablo Picasso and Wassily Kandinsky.

He lived in Paris for much of his career. He joined Max Ernst and Jean Arp in the transition to more modern art forms, yet stayed close to Kurt Schwitters and Tristan Tzara who didn’t joined the Surrealists. Man Ray was also very indebted to Rene Magritte and Giorgio de Chirico, and to Alfred Stieglitz's gallery and photographs.

Man Ray’s Le Violon d’Ingres (1924), a famed photograph depicting a nude woman’s back overlaid with a violin’s f-holes, sold for $12.4 million Saturday, a record as the most expensive photograph ever to be sold at auction. The sale came after a drawn-out bidding period that lasted nearly 10 minutes during Christie’s New York’s auction dedicated to Surrealist art.

I am very familiar with Man Ray's story and am still speechless.

Thankyou so much for this . I had heard of him and am familiar with that amazing ariel photo over New York but otherwise hadn't realized who he was . What an amazing life and aren't we lucky he had such great parents encouraging him. I bet he would have made a great architect too.

most so-called democratic countries have often opposed immigrants, via banning new visas, turning the ships back, sinking the ships or placing the would-be migrants on isolated island prisons. Yet the most talented artists, writers, scientists, sports people, journalists etc in their new nations seemed to be the migrants themselves or their children. Man Ray was a perfect example, of course, but so were many of the other stars I have written about in this blog.

Encouraging, supportive parents were also a blessing :) mem, do you write a blog?

I remember being in a critical studies group with a tutor who introduced us to Man Ray. The tutor was crazy about his work. It was all new to me and the first time I had seen such excitement about a photographer. I felt I had to study this person and I was remiss for not knowing more. We were given work to do and sent out with a camera to blieve we were Man Ray. I was later studying with French documentary filmmaker Fred Fabre who was a friend of mine on my MA course in London and he said that Man Ray was the greatest avant garde photographer who had ever been; maybe he said that because he was French and Man Ray had been in Paris I believe.

No Hels I don't .I used to do one related to Sewing and dressmaking but don't have time as I am working and grandmothering and daughtering etc . I enjoy yours enormously . I love its eclecticism and it tends to give me a break in my schedule of clinical work where I can think about something else and enquire about things that I wouldn't normally encounter in my everyday life . Its good quality brain food so thankyou very much . My other favorite is Spitalfields Life . SOOO good .

you were fortunate to be introduced to Man Ray's work by a tutor who thought he was the greatest avant garde photographer who'd ever lived. I probably agree.

But because fine artists didn't see photography as a fine art, Man Ray was keen to promote himself as a painter. Not an issue now, but this was certainly a sadness during his busy career.

oh yes, I remember. If you ever get the urge to test your blogging abilities again, you could propose a guest post for my blog :) 900 word maximum about most historical or cultural themes.

Re Spitalfields Life, I also loved that blog and cited it in my own blog. I will go back now and re-add it to my List of Favourites.