The day the world came to Gander, Canada. Thank you, Newfoundland. 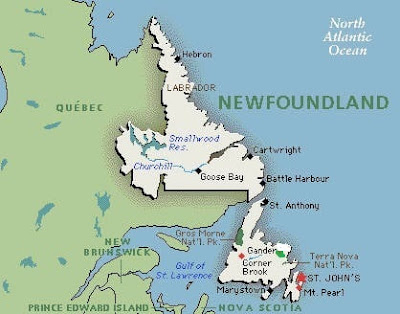 In June 1936, workers jumped off the New­foundland Rail­way, and set about cl­ear­ing land for what would become the world's largest airport, having one square mile of tarmac. Most of the people who built Gander were ordin­ary men from all over New­found­land; the wages were good and the manual work was back-breaking but speedy.

In Jan 1938, a single-engine biplane made the first landing. With the threat of European war, Gan­der became a strat­egic post for the Royal Air Force Ferry Command. Too new to appear on maps, the base rem­ained a secret as c20,000 North American-built fighters and heavy bombers were transported overseas. 3 new American bases opened, while 2 Canadian bases were built at Gander and Goose Bay. Thanks to its locat­ion between Europe and North America, the airport was the perfect fuel stop for pre-jet engine air­craft.

In WW2 Gan­d­er oversaw Allied aircraft flying to Europe. And it was a major factor in Newfoundland’s improved ec­onomy. 12,000 British, Can­ad­ian and American servicemen lived in crow­ded barracks beside the run­ways, and the base became a bustling comm­unity.

The 38 airliners were landing at Gander
and were parked together, awaiting instructions,
SMH

Post-war, the airport reverted to civilian control. Gander was an unlikely loc­at­ion for an international airport, yet the tip of this rocky Can­adian isle remained important. By 1954, it was the largest airport anywhere! Planes went to New York, London, Berlin and Tel Aviv etc, with the clocks in the terminal showing what time zone their destin­at­ions were. Gander Airport became truly cosmopolit­an!

Throughout the Jet Age of the late 50s and the 60s, most Trans­atl­antic flights required to refuel at Gander. While the Cold War drew hard lines between eastern-bloc and western nations, Gander remained a safe haven for all. Even Soviet planes, banned from American soil, could land there.

Gander has remained involved in inter­nat­ional aviation technol­ogy, hosting the first transat­lan­tic test flights of the SST Con­cor­de. And the airport was designated as an alternate landing site th­roughout NASA's Space Shuttle era .

As cross-continental travel increased, Gander became a refuelling stop for commercial air­craft. The biggest airlines of the day ran regular trans­Atlantic services via Gander. Soon the airport was annually handling 13,000 planes and 250,000 passengers, so they designed a new, artistic terminal with a colourful mural.

Refuelling jet engines wasn't nec­es­sary, so modern routes bypassed Gander and headed straight for US. Nonetheless in the later C20th, the airport remained busy. Planes from East German, Cuban, Czechos­lov­akian and Soviet Un­ion airlines continued to land in Gander, often then flying to Cuba: a Communist European base. But after the Berlin Wall fell in 1989, Gander faded. In fact I’ve been to Canada a dozen times, but had never heard of Gander Airport. 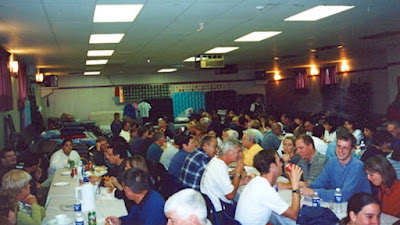 The good citizens of Gander fed thousands of stranded travellers
then organised bathing, sleeping and supplies for them
SMH

The world was devastated by the terrorist attacks on 11th September 2001. Global air traffic in the USA halted and those already in mid-air were rerouted, to military and civ­ilian airports across Canada - including Nova Scotia, New­foundland and British Columbia.

Each pilot informed his passengers that there had been a terrorist att­ack in New York and the plane would be re­directed. 38 aircraft land­ed unexpectedly at Gander that day, grounding c8,000 people on the air­port's otherwise empty runways. The authorities told the pilot how to avoid the security threat.

Meanwhile Gander’s citizens urgently prep­ar­ed food and shelt­er for the passengers. The citizens could have left the frightened pass­engers in the air­port, but families warmly welcomed them into their homes. The population of Gander almost doubled over­night and thus began one of the most heartening stories to come out the Twin Towers catastrophe.

Years later Gander Airport won a starring role on New York's Broadway and in London's West End, thanks to the musical, Come From Away (2017). The show's Canadian husband-and-wife writer team, Irene Sankoff and David Hein, developed the book, mus­ic and lyrics. And a filmed version of the award-winning show will stream internationally in Sept 2021.

The 12 actors played multiple roles: locals and passengers. As the ac­tors seamlessly switched character, by adding some clothing and chang­ing their accent, the multiple role-playing enhanced the message of universal humanity.

The global success of Come From Away had other effects i.e Gander was back on the tourism map. Gander's famous lounge is currently being renovated, for these new tour­ists. 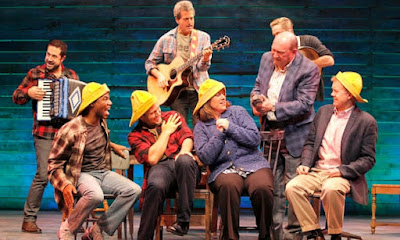 Come From Away: hugely uplifting
The Guardian

See a Rabbi who helped inspire Come From Away. Every year, British Rabbi Leivi Sudak travelled to New York to pray at the Lubavitcher Reb­be’s grave. In 2001 he planned to fly in and out again, with­in 24 hours. But two hours into his flight home, he noticed the Amer­ican Air­lines plane was flying in the wrong direct­ion, and the pilot quickly announced there’d been an attack on the Twin Towers!

Back then R’Sudak had no idea that his experience would be used by a key character in the musical. For R’Sudak, his time in Gander showed the very best in humanity after an unth­inkable act of terrorism. It was not a rich town, yet the town’s people brought blank­ets, food, soaps and clothes. They transformed a local school into a dormitory. In one of the scenes in the musical, Sudak’s ch­ar­act­er prepared a Sabbath meal, at which a Tibetan monk from the plane was among the 12 guests. And a local, who’d hidden his Judaism since the Holocaust, refound his heritage with R’Sudak.

"Flown into the Arms of Angels: Newfoundland and Labrador’s Unsung Heroes of 9/11" is by Mac Moss.

This book is about Newfoundland and Labrador’s response following 9/11. For the first time, Mac Moss tells the stories of people across the entire province—from Stephenville to Gander, to Goose Bay and St. John's—who pitched in and helped 13,000 stranded passengers in 2001 after terrorist attacks in the United States changed the world forever. He has interviewed municipal leaders, Canadian Red Cross, educators, clergy, and many others who volunteered to give the passengers shelter, food, laundry, and love.

How many days did those passengers have to rely on Gander's generosity?

A fascinating story! I hadn’t heard the whole thing before,

My brother saw Come From Away on stage. I see it’s on Apple TV. Must check it out.

Never heard of Gander until reading your post. I did, however know things about Newfoundland, as a former blog follower was from that part of Canada and used to mention it.
The musical Come from away, seems to have put Gander again on the map; the airport and the citizens of the town highly deserve it.

When we saw Come From Away in 2019 most of the real people who were being portrayed on stage were seated all around us (including the Canadian producer. He was from Oakville outside Toronto where the show was conceived and developed and where we stayed for a few weeks just prior to seeing the show). They were lovely people and we were sitting next to the real Nick & Dianne who have been married since they met each other in Gander. Our daughter and son-in-law-to-be were heading towards New York on the way to California. Ten minutes ahead and they would have been diverted to Gander! Their aircraft was turned around they came back to London having spent ten hors in the air.
See: https://todiscoverice.blogspot.com/2020/09/come-from-away.html

"Flown into the Arms of Angels: Newfoundland and Labrador’s Unsung Heroes of 9/11" sounds like a worthwhile history. I will check our library, many thanks.

Deb From the attacks on the 11th September, American and Canadian air spaces were totally closed except for military and police purposes. Civilian air traffic started opening 2.5 days later and everyone was out of there in under 5 days. A very difficult time for passengers and staff.

Sue Would you get your brother to review Come From Away for your blog, or for Helen's. I asked around a bit but noone had seen it.

DUTA All Canadians talk about how warm and hospitable Newfoundlanders are, yet not everyone has been there. The airport and the citizens of the town highly deserve any fame Gander derives from the day of infamy back in 2001, and from the music since.

bazza You have had unbelievable closeness to the Gander story, as written up in your blog. Your children were very fortunate.

What is the probability of you being lucky enough to be at the final London preview when the show opened in Feb 2019. And to be seated next to the real life characters and creators.

Come from Away was a live stage musical created by Irene Sankoff and David Hein in 2017. But now that the Broadway performance has been shut down in Sydney and other cities by covid, they decided to create a film. It was made earlier this year in New York, and often included members of the Broadway cast.

The film of Come from Away was released on Apple TV+ earlier this month.

Thank you, especially as I only read one review.

"It was not a small tale that depicted few people, but it was a tale that happened on 7000 people; these people welcomed the come from away into their community after the problematic scenario happened, and amongst all the chaos, these passengers and locals followed a life where they found love, laughter and new hope in the unlikely scenario and the lasting bonds that they had. This movie must be watched, and not skipped, for the story that it depicts" (Gizmo Story).

I know the story but reading your account of it made me tear up. Even now, I have still not really heard of Gander.

Hi Hels - it was an extraordinary story ... and so very fortunate for them, while Gander really showed true human kindness in so many ways. Thanks for highlighting - Hilary

when Australia promised to drag out illegal refugees back out to sea to drown them, I thought we had reached the bottom of the barrel, moral-wise. Even now Italy is turning row boats filled with refugees back to North Africa.

So I too teared up at the humanity of ordinary Gander citizens.

The newspapers are always filled with hideous stories of starvation, disease, destructive bush fires and massacres. Yet when there is a true and heart-warming story of human kindness, we hardly hear about it. Perhaps heart-warming doesn't sell newspapers.

it was a remarkable story, but alongside the New York tragedy in 2001, the Newfoundland contribution to the safety of planes and passengers barely made the newspapers. I am very grateful to the books and journal articles that were eventually written.

A ceremony was held in Appleton, in 2013, to commemorate the 9/11 anniversary. Planes were diverted to other Newfoundland Labrador towns, including Appleton, where many passengers were accommodated locally.