Madame Pompadour revolutionised French society? or slept her way to the top?

I have referred for half my post to Chloe Govan’s paper on  the controversial life of King Louis XV’s mistress, Madame de Pompadour.

Jeanne-Antoinette Poisson (1721–1764) was the daughter of a grotty mother and a penniless fraudster father who was forced to flee the country when she was 4, to avoid hanging for his debts. Jean Pâris de Montmartel, a wealthy tax collector rum­oured to be her biological father, became her legal guardian. Her guard­ian arranged her young marriage to his nephew, Charles-Guillaume Le Normant d’Étiolles. 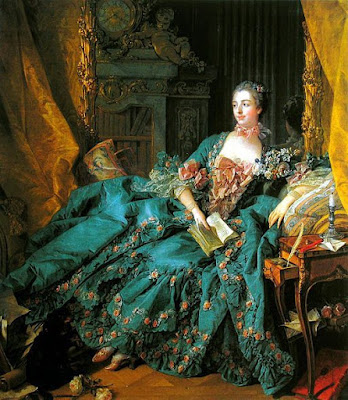 When Jeanne-Antoinette and her husband acquired a château near the King Louis XV (1710–1774)’s hunting lodge, instead of settling into gentle married life, she paraded on horseback, hoping to catch the monarch’s eye. The king’s official mistress died in Dec 1744, leaving the position unfilled, so Jeanne-Antoinette was invited to a Palace of Versailles costume ball in 1745.

Jeanne-Antoinette came dressed as Diana, the Roman goddess of the hunt. Unmask­ing himself, Louis declared that he reciprocated her feelings. Within a month Jeanne-Antoinette had abandoned her husb­and (her two babies died in childhood) and moved into her own fancy apartment in Vers­ail­les Palace, directly above the King’s living quarters. She was given the title of the Marquise de Pompadour.

Queen Marie, who cared far more about power than romance, lacked desire for King Louis in any case. So the queen readily accepted her love rival without jealousy. Pompadour made herself indisp­en­sable as her queen’s respectful lady-in-waiting. In answer to rum­ours circulating in court about their love life, Louis acknowledged that genuine passions burned between himself and his mistress.

The King’s mis­tress wasted no time in sparking controversy eg she supported and aided the creation of the first French Encyclopaedia!  And she was utterly unapologetic about her endeavours. Counting Enlightenment thinkers among her closest friends, she held salons in literary circles and championed free thought.

But Pompadour’s political views had poor consequences and spelled the end of her reign over public affections. As a close adviser to Louis, she prompted him to break a peace treaty with Prussia and to partner with Austria instead. Soon after this decis­ion, France suffered a humiliating defeat in the Seven Years’ War.

Follow in the footsteps of this revolutionary and visit Versailles, and the royal Châteaux of Fontainebleau and Comp­iègne. She spent time in all three and helped oversee the design of the latter two. Her Paris mansion, Palais de l’Élysée, was a gift from the King.

Note Pompadour’s great passion for porcel­ain at the Manufacture nationale de Sèvres Porcelain Museum-Factory, a few ks from Paris. And for her endless support of the tapestry industry. Nonetheless her contribution to the arts seemed to do little for her reputat­ion. In the last Portrait of Madame de Pompadour by François Boucher her serious demeanour disguised a former life of scandal and stormy political subterfuge. She dis­played calm, demure, glassy eyes and conservatively pursed lips. An outward appearance of virginal virtue!

The controversial royal mistress was one of the most reviled women in the country when she died of TB in 1764, at 42. So why did Govan suggest it had been a grave mistake to dismiss Pompadour as just another hot seduct­ress? She had revolutionised French society.

*Now let us ask how Madame de Pompadour revolutionised French society. Her position was a highly political one as well as a sexualised one, a split many apparently powerful women had managed over the years. King Louis XV died many years before the French Revolution, none­theless his reign was rem­embered as disastrous for France. In this tense polit­ical climate, the King’s favoured mistress drew a lot of extra criticism. She was blamed for France’s failure in the Seven Years War and for running up court debts when she functioned as de facto prime minister. She was the king's closest advisor.
Pompadour was portrayed as a shrewd schemer who used sex to gain inappropriate influence over the king and increase power for her­self, but she was hardly alone. In the sequestered court at Vers­ailles, everyone was directly or indirectly vying for power and influence over the king. So the rel­ent­less maligning of just HER reputation before and after her death was greatly overstated.

Madame Pompadour should now be remembered for her artistic contrib­utions, both as patron (which I knew) and creator (which I knew not­hing about) - she did etchings, cut gems, played music and stag­ed court amusements. And she commissioned artists to pro­duce works that were displayed in her private coll­ection and at the court.

As Govan noted, Pompadour gave very keen sup­port to a porcel­ain factory that made beautiful tableware at Sèvres, near Versailles. She was instrumental in establishing Sèvres porcelain as the luxury ob­ject of choice through­out the C18th. In an attempt to bring Sèvres into the favour of her King, she commissioned an int­erior garden comp­rised entirely of porcelain flowers. Thanks to her, in 1753 Louis XV declared Sèvres a Royal Factory, a place I much loved.

Women who could understand and organise artistic and scientific innovation.. played an important role in the French Enlightenment. That was equally true for Pompadour who met and patronised En­lightenment intellectuals like Voltaire and Diderot. 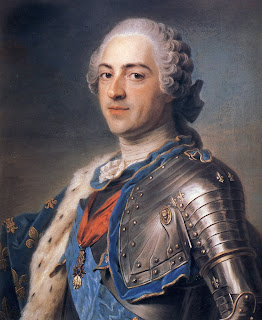 And she lobbied for the publication of the first French Encyc­lop­aedia. It was a showcase for France’s new, rational intellectuals, much to the annoyance of the Catholic Church who wanted it banned. The Encyclopaedia openly discussed the Scientific Revolution, challenged the legitimacy of the ruling class and promoted reason ahead of religion. I imagine Old Conservatives loathed the emphasis on scientific determinism, and its criticism of the abuses executed by judicial and clerical institutions. People suggested the Encyc­lop­édie was an intellectual prologue to the French Revolution, but was Madame Pompadour totally to blame for galvanising the Reactive Right? Surely not. 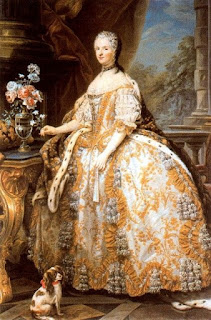 Neither King Louis nor Madame Pompadour valued their legal marriages. But at least she was a fine patron of rich porcelain, rich tapestries and rich architecture.

I wonder if her later artistic and cultural endeavours would have protected her from the Revolution, had she lived long enough. I think not.
Although she appears to have been scheming and power-crazy, I suppose it was hard for many women to make progress in any other way in those days.
CLICK HERE for Bazza’s actually adoxographic Blog ‘To Discover Ice’

Hello Hels, Why blame Pompadour for giving bad advice when she was not a war minister or foreign diplomat? I would blame Louis for taking the advice, and not debating it more thoroughly with more responsible parties.
--Jim

Avery Flawed system where rank rather than brains led the way in decision making and the only way a woman could gain influence was through sainthood or whoring . " Dam Whores and Gods Police " springs to mind . She sounds like a remarkable person who made the most of what she had but with education and opportunity may have been even more able and been a great influence for good on the French . That's one of the tragedy of sexism or indeed any form of discriminations , Everyone loses out

Once Madame Pompadour's children sadly died and she left her husband, she had the opportunity to live a cultured life. Bless her heart, she was a key patron who established Sèvres porcelain as the art ob­ject of choice through­out the C18th. I have no doubt that Louis XV declared Sèvres a Royal Factory at the behest of his mistress.

I knew much less about Madame Pompadour's royal patronage of tapestries.

the French had a long term dislike of the Louis Kings and their women, so it didn't surprise me when King Louis XVI and Queen Marie Antoinette were executed in 1793. Perhaps Louis XV and his wife/mistresses were saved ONLY because they died before the Revolution arrived. Only then did the long era of absolute monarchy in France end.

Madame de Pompadour was a member of the royal court with at least as much access to the King as the other courtiers, probably much more. Most of the historians I could find suggested that Madame de Pompadour greatly influenced European politics, architecture and the arts through her patronage of Enlightenment figures eg Voltaire and through her cultural salons. Thus she didn't deal in formal ministerial responsibilities.

King Louis was clearly very keen to share in Madame de Pompadour's Enlightenment views and to approve of her literary and other patronage. So when we talk about contemporaries and more modern commentators distrusting her, the sexism did not seem to come from the King.

I find it hard to judge women, even those of a rather notorious reputation like Madame de Pompadour. The world has always been male dominant and women tried the best they could to become influential through their style and approach, in as many walks of life as possible.

I would say it is hard to judge women who did NOT shine... were they talented but were defeated by their husband, father and the entire system? But women like Madame de Pompadour DID shine. The first French Encyclopaedia was a brilliant achievement! Her patronage, art, music and literary salons may not have revolutionised French society, but she gave it depth and direction that few others had done.

Louis XIV is the sum of my French knowledge, so I really know nothing about her, apart from her name and portraits, and you've really piqued my interest to delve further. She does sound fascinating, as all whose reputation becomes rubbished often are.

I suppose anyone in the public eye opens themselves to reputation-rubbishing, but it needs to be based on fact and it needs to be relevant. Govan's quotes were telling: "The controversial royal mistress was one of the most reviled women in the country when she died at 42". And "Pompadour was portrayed as a shrewd schemer who used sex to gain inappropriate influence over the king and increase power for her­self".

She must have been the only woman in French history to use sex to improve her life!! Ha