How can an author frame the life of a paradoxical historical charact­er, partic­ularly one who has almost slipped out of Australian public conscious­ness? Author Gideon Haigh noted the issue in the first chapter of his book The Brilliant Boy: Doc Evatt and the Great Australian Experiment. 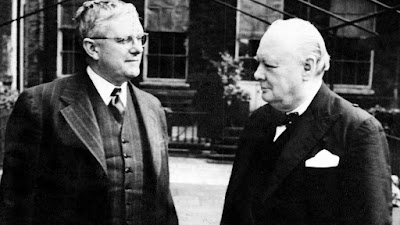 In this clever narrative, Haigh resurrected his hero by focusing first on a private tragedy in a Jewish migrant family in Sydney 1937. In 2019 Haigh was reading the transcript of a 1938 hear­ing in the NSW Sup­reme Court, the accident­al death of a child which precip­itated one of the most div­­isive, hist­or­ically significant cases in Austral­ia’s High Court.

Herbert Vere Evatt (1894–1965) was a brilliant barr­ist­er and Just­ice of the High Court of Australia who breathed life into the Int­er­war mig­rant experience, Jewish extend­ed family life and Council res­p­ons­ib­ilities. Note the terrible psychol­ogical trauma on the dead child’s mother Gol­da Chester, from a market town Lowicz in the Polish Pale of Settlement. A 7-year-old Max Chester (his mother’s bri­l­liant boy, see book title) drown­ed in a waterfilled trench near the house, which had been left unfen­c­ed by council workers. The family sued the Waverley Council and when the mat­ter wound its way to the High Court, Evatt was one of the jud­ges who ruled on the comp­lex case. Ev­att’s lengthy judgment be­came a water­shed in Austral­ian legal history, alth­ough it was a diss­enting judg­ment. Mother Golda Chester suicided.

Herbert was also born in a family who knew trauma and grief. His dad died of rheumatic fever in 1901, and 4 of HV’s 7 brothers died of typhoid or in WWI trenches. Herbert tried to en­list in WW1 but was re­j­ected because of poor vision. His brot­hers filled the men-of-action role, while Herbert was his mother’s pre­coc­ious boy, driv­en by his own ambition AND his mother’s. Note he got his Doctor of Laws in 1924.

It was quickly clear that Haigh’s book was no saintly biog­raphy. In 1930s-Australia, Evatt was an intellectual power­house; the youngest judge on the High Court bench, broadly cultured, a writer and patron of the arts. But he had also a endless hunger for praise and laurels. Flawed, of course, but was that so unusual?

Later in the book Haigh ad­justed his lens to capture the ex­t­ra­ordinary life, political exp­er­ience and legal legacy of Dr Evatt. Evatt’s tum­ul­­tuous political career was outside the scope of this book, although it offered much about the political and intellectual infl­uen­ces that informed Evatt’s jurisprudence, and his social attitudes.

Haigh’s task was to allow a judge/politician, in all his prodigious ability and frailty, to emerge from the political propaganda and pub­lic am­nes­ia, and to critique Australian complacency and deficiency of hum­an empathy, again!

Read the brutal Australian response to Jewish refugees in 1938 at the Evian Conference. The Conservatives were in power then, but you will see the relevance to Labour’s Evatt shortly. The legal basis for Australia’s wartime internment policy was the National Sec­urity Act 1939, which allowed the government to issue regulations em­powering authorities to control nationals of countries at war with Aus­tralia. The internment of enemy aliens went ahead, under the new PM Robert Menzies. The prisoners included Jewish refugees directly from Eastern Europe or those escaping Naz­ism via internment camps in UK on the Dunera etc. 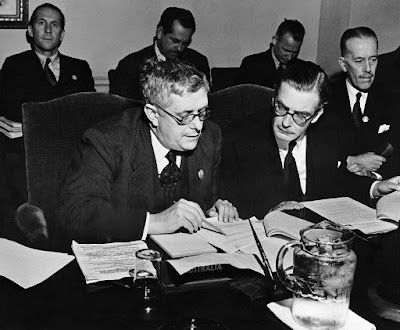 L] Dr Evatt and R] Anthony Eden the UK Foreign Secretary,
examining documents in San Francisco, 1945.
United Nations photograph.
From my perspective, Doc Evatt’s later decades were even more influen­t­ial. When Labour came to power under P.M John Curtin in 1941, Evatt bec­ame Attorney-General and later Foreign Minister. He was Labour’s Dep­uty Lead­er/Deputy PM after the 1946 election, under the leadership of Ben Chif­ley. And from 1951–1960 he was Leader of the Labour Opposition during the long ascend­ancy of his great rival Robert Menzies, Austral­ia’s most famous prime minist­er. Yet Evatt was already a public intel­l­ect­ual, confident advocate and outspoken opinion-maker. It helped to exp­l­ain Evatt's valiant defence of liberty and democracy in fighting off the 1950 vote to ban Commun­ism in Australia. Where in Australia are commitments to democracy now?

Dr Evatt’s humanitarian and internationalist values helped in the crea­tion of the United Nations from 1945 on. Then he served brilliantly on the Preparatory Commission of the U.N, Security Council, Atomic Energy Commission and Commission for Conventional Armaments. From Nov 1946, Australia's Deputy Prime Minister repres­ented his country in the Pacific Council, Brit­ish War Cabinet, Council of Foreign Ministers in the Paris Peace Conference, British Commonwealth Prime Ministers' Con­fer­ence, Far-Eastern Commission and he was President of the South Pacific Regional Conference. 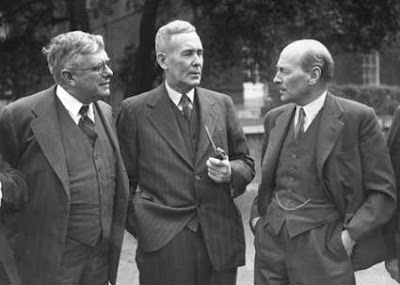 Evatt was fam­ous­ly the only Australian President of the UN General Assembly, presiding over the proclamation of the Universal Declaration of Human Rights, the foundation of human rights across the modern world. Thankfully for the Jews who survived the Holocaust, Evatt was instrumental in the foundation of Israel in 1947-8. Despite Austral­ia’s anti-Semitism at the 1938 Evian Conference and the internment camps for Jewish refugees in Australia in 1940, Australian Jews are still beholden to Dr Evatt’s memory today. 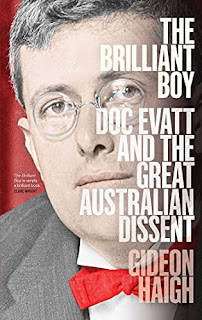 I grew up learning about Australia's All White Policy, which was gradually dismantled but I remember being shocked and confused by it. We had friends in Australia; they couldn't be racist could they? Well, no they weren't but it took a while for me to come to terms with it!
Racism in the UK was institutional, not law, but it existed...
CLICK HERE for Bazza’s perfectly pabulous Blog ‘To Discover Ice’

When Mrs Evatt lost her husband and most of her sons, she naturally became precious about her surviving children. But Herbert added his own brilliance, in law, as a judge and in the arts. Ambitious, protected and uber talented.

I assumed that Australia’s human rights, health and social responsibility made it a leader of democracies. Universal suffrage had been in place for years. Educational standards saw the creation of universal & free high schools, and the first free university. Yet Australia in 1913 enthusiastically embraced the White Australia policy and many people had negative attitudes to those not of British extraction. Unbelievable!

Evatt's defence of liberty and democracy meant he was appalled by the White Australia Policy, fought anti-Semitism vigorously and worked hard against the 1950 vote to ban Communism.

Herbert's mum Jane lost two sons in infancy, two sons in WW1 trenches and two sons in a typhoid epidemic. If I was the mother of the last remaining son, I would have wrapped him in cotton wool and never let him out. Alas she died in 1922, so she didn't even have the pleasure of seeing her son's great successes which largely came between 1925 and 1955.

Hels, look what I found in The Sydney Institute

"For three decades after his death, The Doc held the status of a Labor saint. During this period, Evatt biographies were written by Alan Dalziel (1967), Kylie Tennant (1970), Peter Crockett (1993) along with co-authors Ken Buckley, Barbara Dale and Wayne Reynolds (1994). The Dalziel, Tennant and Buckley/Dale/Reynolds books were essentially hagiography. While Crockett’s work was sympathetic, it did contain some devastating material about Evatt’s mental health when he was a cabinet minister in the Labor governments headed by John Curtin and Ben Chifley".

Interesting read on an interesting Jewish-australian figure! He emerges from the biography as a brilliant man with a vast political and legal career.
Never heard the name Everett before, although I understand from your post, he was instrumental in the foundation of Israel.

many thanks. I will read Crockett's work carefully because I have not seen any evidence of Doc Evatt's mental issues. My grandfather worked with Evatt in the same party but in a different state, so he may never have seen evidence of Evatt's mental issues. But in any case, Evatt really did hold the status of a Labour saint and there is no way his colleagues and friends would have mentioned it.

Dr Herbert Vere Evatt was definitely an Anglican who knew nothing about the Jewish Community until the Max Chester case fell onto his judge's desk in 1937. He was outraged that Australia and the other democracies would not take any Jewish refugees at the International Conference in Evian France in 1938, and was more outraged by the internment camps for Jewish refugees in Australia in 1940. But that was because he was a socialist and democrat.

Timing is everything. Israel’s creation depended heavily on the actions of HV Evatt, the Australian statesman who happened to be serving as president of the UN General Assembly at the time of Israel’s admission to the United Nations.

He was certainly an interesting man and I have forgotten most of what I once knew about him. His strong sense of justice is something sorely lacking in many of our current politicians.

most people are average in most issues, skilled in some areas and under-skilled in others. Even Einstein was great at physics, maths and violin but a dismal husband, a worse father and poor in English speech/writing.

But Dr Evatt was brilliant at everything *sigh*. And I loved his politics.

He was always someone who interested me growing up . I can remember my rather right wing grandfather frothing ta the mouth at the mention of him . I think I must have been the family mutant as I was a great admirer of Gough as well when I was all of 12 years old. I can remember my grandparents being aghast at my left wing tendencies even then . My poor mother still cant cope with me . I will enjoy reading this biography , thanks for writing about it .

When you were born, the hospital staff must have put your wrist band on the wrong baby :)

Before my family left Russia and came to Australia, the Russian Revolution had been the most important and lasting event in their lives - equality of opportunity for workers, a welcome to migrants and refugees, equal rights for women, an end to anti-Semitism, universal suffrage, free education, free health care etc etc. And establishment of the State of Israel. Mum and her sisters, plus all their first cousins, joined the Labour Party on their 21st birthdays.

My grandfather relied on, and was closest to Arthur Calwell, Australian Minister for Immigration and HV Evatt, Attorney General and Minister for External Affairs.

that is so true. Even if we had excellent classes at school, mostly we know about our own countries and our neighbours. I am very familiar with British Commonwealth countries, but would be hard pressed to know where some countries are, on the world map :(

I thought history and art history blogging would be totally safe from right wing attacks. After all, we all try to be as scholarly and evidence-based as possible. But I was attacked by a Trump follower and found that very unpleasant. So I will do you a favour and not adopt you... this will protect _your_ reputation ha ha.

Hello Hels, Evatt sounds like a Good Guy. I'll have to read some more about him. It makes sense that public-spirited people with humanitarian values enter public service, but it is astounding how often they are thwarted by those with narrow and selfish goals.
--Jim

I don't accept advertising, so please don't respond to my blog unless it deals with the subject we are discussing. If I wanted to know about spiritual berbalist healing, your finances or your marital relationships, I would ask for your help.

Doc Evatt was not only learned, skilled and dedicated to _community service_, but his career came at the worst time in world history. From the loss of most of his family in WW1, through epidemics and the Great Depression, to the rise of Nazism and WW2.

His greatest contribution to _international service_ was his endless work for the United Nations, from 1945 on.

I’m definitely going to have to start following some of these blogs, I just recently got into reading blogs and I’m absolutely loving them so far.
Airbrush Spray Tan Austin thank you!

thank you. What are you favourite subjects? I may be able to suggest some excellent blogs to follow.