Parisian Charles Bedaux (1886–1944) worked a series of menial jobs before he moved to U.S in 1906 at 20. There he worked digging tunnels under New York’s East River. Thank you History Grand Rapids 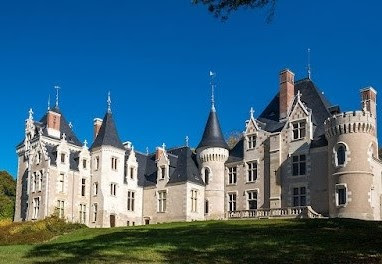 60-room Château de Candé est­ate,
Touraine
Bedaux’s connection to Grand Rapids Mich began in 1915 when F Stuart Foote, general manager of Imperial Furniture Co., launched him. Working for the furniture industry, Bedaux installed the Bedaux System, a lead­ing contribution to scientific management. Plus he did efficiency eng­in­eering for other local indus­t­ries. By 1916 he’d built consultancy firms in Europe and US.

A naturalised American citizen in July 1917, Bedaux de­v­elop­ed a close relationship with American Fern Lomb­ard (1893-1972), a Grand Rapids soc­iety favourite. He left his first wife and courted this daughter of a prom­inent lawyer. When his divorce came through, Charles remarried.

With homes in US and France, and a growing fortune, Bedaux purchased the 60-room Château de Candé est­ate, Touraine in 1926. Be­d­aux poured his money into the C16th castle, doing renovations bet­ween 1927-30. The chat­eau was filled with rare art treasures and special arch­it­ect­ure, and was modernised with water, el­ec­t­­ricity and cent­ral heat­ing, and with his own golf course.

In Nov 1929 Charles & Fern began a 5-month Af­rican safari, a hunting expedition that was film­ed: from Kenya, to Sudan, French Equat­orial Af­rica, Nigeria, Sahara, Al­giers & lastly Morocco. Conn­ections in th­ese countries later helped Bed­aux when he was working with the German war­ government.

Duke and Duchess of Windsor
Charles and Fern were leaders of French society, mixing with wealthy fam­ilies on the Riviera. And as Hit­l­er began to move Germany’s industry for­ward in the early 1930s, Bed­aux also developed a close relationship with a number of high profile German lead­ers, including Joachim von Ribbentrop & Otto Abetz, Nazi amb­assador to France. 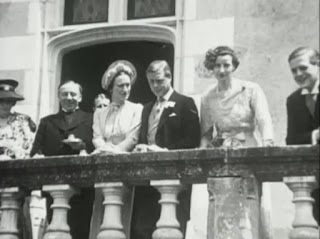 Charles Bedaux hosted the Windsors' wedding in his Château de Candé.
Fern was standing next to the Duke and Duchess
With an intimate friendship well established with Wallis Simp­son, Charles and Fern were aware of the const­itut­ion­al crisis facing U.K in 1936. With the death of King Geor­ge V in Jan 1936, Edward was crowned King Edward VIII. The King’s rel­ation­ship with oft-married Simpson was very unpop­ular in Britain and many wond­ered about the new King’s re­l­ationship with Hitler’s Germany.

In Oct 1936 the King wanted to marry Wallis. The cons­t­itut­ional crisis continued with Wallis leaving Britain to stay with friends in France. King Edward abdicated in Dec 1936 with his brother becoming King George VI the next day. Charles and Fern Bedaux invited Wallis to stay at their Chateau de Cande while the turmoil continued.

With her divorce finalised in May 1937, the royals reunited on Bed­aux estate. Edward prop­osed, and they were mar­ried at Château de Candé in June 1937, with the famous English photo­gr­apher Cecil Beat­on taking photos. No member of the British Royal Family attended the wedding!!
To Bedaux’s delight, the Windsors loved the idea of making a trip to Germany where Bedaux arranged for them to meet his close colleagues, senior Nazis. These visits emphasised the strong suspic­ions of many in British government that the Duch­­ess was a German agent or a Nazi sympath­iser. It was thought that both the Duke and Duchess were passing on in­form­at­ion to the German Government before the invasion of Fr­an­ce. The royals’ last visit was meeting the Führer at his Berchtesgaden retreat! 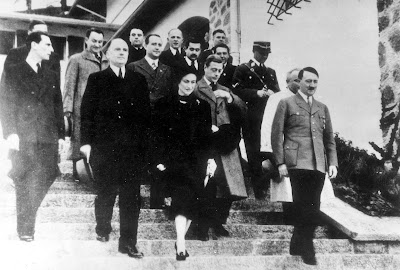 The Duke and Duchess on the last formal visit in Germany
meeting the Führer
at his Berchtesgaden, 1937
Arriving in Berlin that Oct, the couple were greeted by an SS band play­ing God Save The King! Parties and rec­ep­tions followed and the Duchess, snubbed in UK, happily noted that all the leading Nazis bowed to her. The Wind­sors toured fact­ories and coalmines, and Ed­ward re­warded his hosts with warm speeches praising Germany and a Nazi salute.
When Paris was occupied by the Germans in WW2, Bedaux became even closer to leading Nazi and Vichy figures. After France fell in 1940, he was appointed as an economic advisor to Vichy and the Reich. Bedaux was preparing to build a pipeline to transport oils across the Sahara for the Vichy French government and the Nazis. In Oct 1941 he was ordered by Abwehr II to com­mand a mission to capt­ure oil refineries in Persia from his former client; and he would protect it from Allied bomb­ardment prior to a plan­ned Ger­man invasion of Iraq & Persia. But by late 1942, strat­egic events (eg Battle of Stal­ingrad) had rendered the oper­ation unwork­able, and Bed­aux was drop­ped by Berl­in. Nonetheless counter-sabotage plan still looked suspic­ious and Bedaux was later investigated by FBI and MI5.

Bedaux was arrested in Algeria after the Nov 1942 Allied Invas­ion, on orders of Gen Dwight Eisenhower, and was kept in custody without charge for a year. [After Charles Bedaux’s arrest for treason, Fern Bedaux was interned in Paris. Then released through her connection to Otto Abetz, Nazi Ambas­sador in France].

Charles was sent to the U.S for a trial before a mil­itary commission, for treason and communicating with the enemy. The day before his suicide in Feb 1944, Bedaux was told at a hearing in Miami that he’d have to wait in FBI custody. But he committed suicide using an over­dose of bar­biturates in prison. His death feat­ured widely in all U.S med­ia.

Conspiracy theories abounded. They us­ually located Bedaux as a conduit between Nazi and British el­it­es, who facilitated important events in WW2 eg the fall of France and the all­eged murder of Heinrich Himmler by Brit­ish agents. Yet many Americans were relieved when he died, because Bedaux knew too much about the connections between Amer­ican industry leaders and the industrial development in Nazi Germany. What was particularly strange was that his case was linked with Jan 1943 deaths of FBI Assistant Dir­ec­tor Percy Foxworth and Special Agent Harold Haberfeld; they were kil­led when their plane cr­ashed mysteriously over Brasil, en route to work on the Bedaux case.

To restore Bedaux's rep­ut­at­ion, the French government awarded Bedaux a posthumous Légion d'honn­eur since he’d actually “hamp­ered the Germans” and “guard­ed Jewish property”. But was this award really made, given he worked with leading Nazi and Vichy figures!! Read Charles Bedaux -
Deciphering an Enigma by Sol Bloomenkranz. 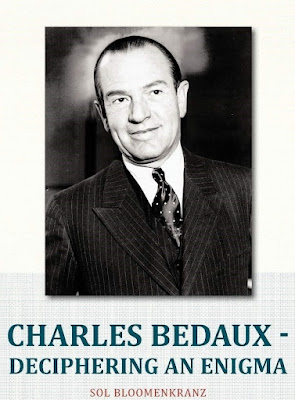 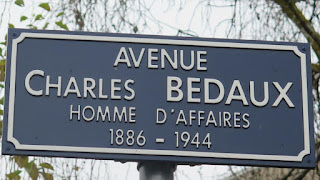 L’avenue Charles-Bedaux homme d’affaires
Honouring Bedaux in Tours from 1966 until 2018.

I understand why Bedaux would work together with Vichy.. They both wanted what was good for France and good for Bedaux. But did he not think that Vichy represented Germany's interests in the half of France that was not occupied?

Deciphering An Enigma was a perfect title for Bedaux. Yes his top priority was doing brilliantly in business, but at any cost? He was a close colleague of senior Nazi leaders, and he assiduously befriended Petain, presumably so he could build railways and pipelines across French colonial African deserts. Yet he helped the Allies by diverting war material away from the Front Lines.

Hello Hels, People can usually be judged by the company they keep, and Bedaux was cozying up to all the wrong people. It sounds like his death was no great loss to the world. Of course, no lessons were learned from this. Even today we see many who are ready to sell out the world for a few (or a few hundred million) dollars.
--Jim

I suppose in war time, enterprising men always cosy up to whomever they think will be good for their careers and reputation. And yes, it is still happening today, as you say. But even within his close circles in Vichy and Germany, there were rapid changes in loyalties that Bedaux could not have predicted.

As it reads to me, France made a mistake by awarding him an honour. He sounds immoral and only concerned with amassing wealth.

Hells did you know Eric Abetz is Otto Abetz nephew.? I heard him once as defending his uncle for saving Paris from bombardment . It was an Insight program I think on SBS

Royals have always married royals and aristocrats from other countries, to keep the royal standards up and to spread the genes more widely. So Wallis and Meghan being foreign was not the problem. But even before her 1936 wedding, Wallis was already a clear Nazi sympathiser. That was unforgivable.

I wonder if the French government awarded Bedaux a posthumous Légion d'honn­eur to hide his war-time behaviour or because they didn't believe the American charges of treason and communicating with the enemy. And naming L’avenue Charles-Bedaux in Tours after him was a very public statement of honour.

Otto Abetz was obeying German orders when he was German ambassador to Vichy France and therefore not treasonous. But he was convicted after the war for crimes against humanity and the Jewish people, which Eric Abetz must have known about.

Charles Bedaux also must have known. He had a close personal and professional relationship witb Otto Abetz.

Normally I don't tackle historical themes I know nothing about, but when I was analysing the British royals' trip to Germany in 1937, it became clear that Bedaux arranged for them to meet each senior Nazi. Now I am still not sure if I fully understand how a French-American industrialist achieved his successes before and during WW2.

I think that, in wartime, people are inclined to want to side with who they think will be the winners. I have a certain amount of sympathy for that. Who of us could be certain that our own self-preservation would not dominate the path of our actions. Having said that, there is or should be, an inbuilt moral compass that hopefully guides us.
On the other hand there probably people who would behave badly in any situation in order to better themselves...
CLICK HERE for Bazza’s openly obtuse Blog ‘To Discover Ice’

I wouldn't have minded if a man with French and American citizenship wanted Germany to win the war; he could have moved to Germany or to any of their occupied countries, including German-occupied Northern France.

When Abetz returned to Paris, Charles Bedaux met him at the German Embassy and strolled around. Abetz confided that Laval’s arrest had been frivolous. Abetz was impatient with French politicians and mentioned that even charming Laval was superficial. Abetz said he was considering a scheme to please Hitler and undermine Vichy. Bedaux was part of the plan. Weygand, Pétain’s Minister of Defence in the July 1940 Cabinet, had been exiled to Algiers as military governor-general because his strict adherence to the Armistice Agreement annoyed the Germans. Would Abetz ask the general to succeed Pétain as head of a new French government in Paris? Bedaux agreed to carry Abetz’s offer, so Abetz promised more heavy machinery to Bedaux’s coal mines.

Even if these issues seemed trivial, they show what Petain couldn't trust Bedaux ..ever.

thank you for reading the post. But no advertising please