The Monster Petition for women's suffrage in Victoria - 1891 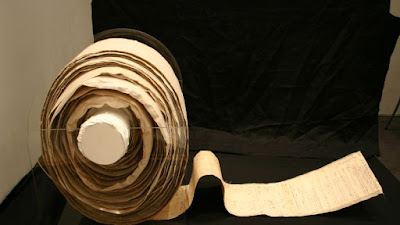 Each completed paper page was pasted to one, long linen fabric
and rolled onto a spin­dle.
260 metres long and very heavy
Victoria’s Constitution of 1855 did not give women the right to vote. Women first received the vote in Victoria in 1863, when in a piece of faulty legislative drafting, the Electoral Act allowed all ratepayers listed on local municipal rolls to vote. However the Legislative Ass­embly quickly changed the “mistake” to restrict the vote for parliam­ent­ary elections to male ratepayers only.
Victorian Premier James Munro said he would introduce a bill into par­liament granting women the vote, if they demonstrated that ord­inary women wanted this right. The Victorian Woman’s Temperance Union and the Vic­torian Women’s Suffrage Society took up the challenge, joining forces regarding a petition in 1891.

The Women's Suffrage Pet­ition (1891) reflected those women’s dedicated work and was one of the most wonderful documents for wom­en’s history in Australia, especially in Victoria. They stated that half the pop­ul­ation should not be without the vote. 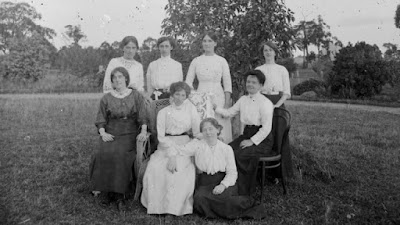 Women gathered on a lawn, preparing to travelling around Victoria
State Library Victoria
The Victorian women believed that voting could improve their lives and their children’s. They hoped to influence liquor laws, en­ab­le equal pay for women, a higher age of consent for girls, introduce playgrounds and schools, and gain greater equality regarding land own­ership and divorce.

It took just 6 weeks going from door to door across Victoria to col­lect 30,000 signatures for women’s suffrage. They covered the state by trav­elling via all the railway lines.

The document’s great length earned it the name of the Monster Petition. When completed it was 260 metres in length and the largest known pet­ition of the C19th; each completed page was made of paper pasted to linen fabric backing, rolled onto a cardboard spin­dle and rested on a Perspex stand. It is now a treasured possession of the Public Re­cords Office of Vic­t­or­ia.

We normally assume that women’s suffrage was a middle and upper-class move­ment, a challenge taken on by those with the education and the in­come to turn their passions into political action. Emmeline Pankhurst in Britain, Vida Gold­st­ein in Australia and others all came from educ­ated society. But look at the suburbs in the Monster Petit­ion eg Car­l­ton, Collingwood, Foot­s­cray or St Kilda, all working-class then. There were fewer signatures from affluent Armadale, Kew and Toorak. 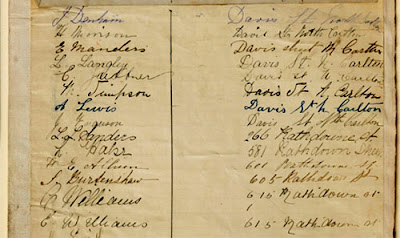 One page of signatures and addresses
Collected across Victoria in 1891 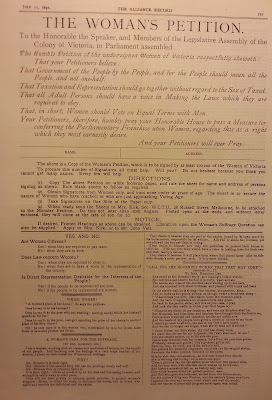 A copy of the petition was inserted into the Alliance Record on July 11, 1891
State Library, Victoria
Ironically, many of the women who signed the pet­it­ion would have been ineligible to vote, had the measure alone passed. The women’s fran­­ch­ise clauses were tied to a provision that would have removed property restrictions to voting! And without property, women would have been as in­el­igible to vote. Did the suffrag­ists ex­plain this to the women in the rented houses? Why was it easier to get sig­nat­ures of the poor? Were working-class women bolder than their wealthier sisters? Many of the women then were ill­it­er­ate; there were places on the petit­ion where several neighbours were signed up in one handwriting. And NB that for some, it may have been risky if their husb­ands were hostile.
The petition was presented to Parliament in Sept 1891 together with a bill that included a women’s suff­rage amendment. The monster pet­ition required several men to carry it into Parl­ia­m­ent and present it to Prem­ier James Munro. Tabled with the support of Munro, the petition sought that Women should Vote on Equal terms with Men. Munro, a firm supporter of the temperance movement and women’s franchise, spoke on the floor for the proposal. But Duncan Gill­ies, Leader of the Op­pos­it­ion, arg­ued against the proposal saying that women should not be given the vote; they couldn’t perform some of the services required by the State eg as soldiers, sailors and police. A contingent of women attending the reading of the bill even de­parted from the ordinary decorum observed by Strangers and applauded the Premier’s key issues. When Gillies ar­oused the antag­onism of his female critics, they loudly hissed. 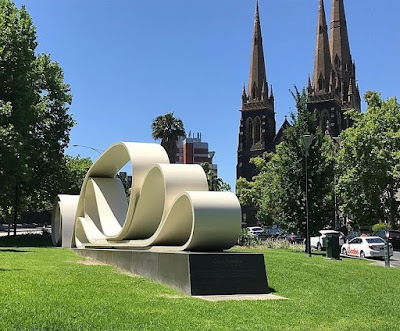 Great Petition sculpture, Melbourne
Created 2008
The  high-quality Age Newspaper thought that there was no logical reason why women should not vote at pol­itical elections if they were generally minded so to do. However The Age believed that women’s suffrage should be presented to the voters at the next election, not in Parliament. Historians have noted that Munro’s attention to women’s suffrage may have been a perfunctory effort, as it was quickly dropped from the Bill before it went to the Up­per House. While unsuccessful in gaining women the right to vote in Vic­toria in that year, it was clear that the women would not end their strug­gle there; they had to fight for anot­h­er 17 years to gain the right to a state vote.

Federation (1901) was important because, in that year, Australia became the first nation in the world to give women the fed­er­al vote and the right to stand for Parliament.
In 2008, on the 100th anniversary of Victorian women getting the vote in state elections, an impressive sculpture was placed in the gardens near the Victorian State Parliament Building. The 20ms sculpture was designed by artists Susan Hewitt and Penelope Lee, and made from bluestone and steel, with the plaque at the end of the base.
In 2014 Eureka's Museum of Australian Democracy in Bal­l­arat publicly displayed the original, giant 1891 Women's Suffrage Petition.
Posted by Hels at 18.5.21

I worked for years at the top end of Collins St and often saw the sculpture en route to the coffee shop. Once I knew what the sculpture represented, it became even more impressive.

Hello Hels, There were a number of obstacles, real or supposed, between the men in power and the women getting the vote. One of these was the idea, possibly only used as an excuse, that many women didn't really want the vote, or would not take a serious interest in political matters. This monster petition effectively removed that doubt. Unfortunately, still standing in the way of women's voting were the ideas that women would take power from the men, or use their new power and numbers to effect "revenge" elections.
--Jim

Australians are very proud of being (with New Zealand) the first nation in the world to give women the vote. So I wonder why this excellent sculpture is not more famous.

Probably most people viewing the sculpture for the first time may be so taken up with the perfect swirling of the ribbon shape that they don't even look for the plaque at the end of the base. So yes, it does make sense that once the viewer understands what the sculpture represented, it became even more impressive.

I have heard every reason in the world why women shouldn't get the vote - they are not educated enough, they will only vote according to their husbands' demands, women are too busy with their own responsibilities (cooking, child care), they don't pay tax, they don't serve in the army, they are always pregnant and light headed. But I have never heard that women would take power from the men, or use their new power to establish revenge elections ha ha.

However it does goes to show that women's rights are always hard-earned and easily-lost. Consider countries that ban abortion and force women to struggle through hated pregnancies.

Those Australian women were well ahead of the game. It must have been the pioneering spirit!
The sculpture is magnificent and would arrest the attention of any passer-by thus achieving it's purpose.

Why did Australian and New Zealand women peacefully get the Federal vote in the 1890s, decades before the rest of the civilised world? There always been a sense of She'll Be Right, Mate here. Men would have said "Females voting won't hurt me, it will make women happy and maybe it will give me a good root in bed tonight".

Ditto Federation at the same time (1901). In just about every other nation on earth, Federation came only after battles between neighbouring countries or civil war between states within one country. Here Federation was debated during the 1890s, then peacefully declared on 1/1/1901. Even if one state was uncertain, no blood was shed.

What a treasure the Public Records Office has in its possession but I would like it to be displayed somewhere more accessible to the public. I remember visiting that sculpture soon after it was installed. 30,000 signatures in a much smaller population would surely be the equivalent of a million or millions today.

the 30,000 signatures was totally amazing, especially since they came from both working class and middle class suburbs, and from both the Big City and the rural areas.

I was looking at the signatures opposing the destruction of Preston Market, a much loved facility in Melbourne. Yet they have amassed only 4,500 signatures :(

Hi Hels - an amazing document ... and how wonderful it has a sculpture to remind everyone interested in its history. I'd never heard of it - however the Suffragette movement was taking shape in England from the 1840s onwards ... slow and perhaps not very sure - but it was there ... spurred on by the Match Girls. Thanks - Hilary

I think the suffragette movement in Australia and New Zealand was so special because the women achieved their goals quietly, without battles and horrible gaol sentences, and very often with the support of male politicians etc. The Monster Petition is a fine reminder of how women's rights were achieved with dignity in the 1890s until 1906.