My late father Les was legally adopted in 1939, when he was 17.5 years old. The 5th of 6 children born to a working class family, each of the young­est 4 children was fostered out to an aunt or uncle while their mother was hospitalised (TB?) in the country for years. My father lived with a much loved aunt who had no children of her own, very close to his old family home. But when the other brothers were returned, Les remained with his aunt. Les understood that adoption could often work out very well for all three parties, but wept in sadness for his birth mother when he was handed his own first baby in 1948. He finally understood his mother's loss. I tell this story to indicate my vested interest in the Tickner story. 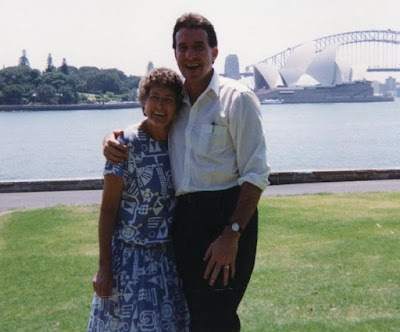 Robert Tickner (born 1951) was born to a single mother in Sydney’s old Crown St Hospital, was adopted by Bertie and Gwendoline Tickner and grew up in rural NSW. He became an Abor­ig­inal Legal Service lawyer and joined the Sydney City Council. In 1984 he won a seat in the Fed­eral Parliament, married Jody and adopted her daughter, and in 1990 he became the Min­is­ter for Ab­original and Torres Strait Islander Affairs. This era saw great reforms during Australia’s most progres­s­ive Labour gov­ern­ments. As the news of involuntary adoptions swept Australia in 2012-13, he called for an inquiry into the Stolen Generations.

Tickner’s book Ten Doors Down (Scribe, 2020) is a sensitive, personal an­alysis of a tough sys­tem that pushed gen­erations of single mothers and their children into the adoption process. Tough church and governmental policies.
Robert Tickner had always known he was adopted, but rarely felt much curiosity about his origins. He'd been raised by his loving adoptive parents in a small seaside town. He grew up to be a confident young man with a fierce sense of soc­ial justice, and the desire & stamina to make pol­it­ical change. Serving in the Hawke & Keating governments, he held the portfolio of Minister for Aboriginal and Torres Strait Islander affairs. As a minister, he was resp­on­sible for initiating the reconciliation process with Indigenous Australians, and he was a core part of the National Inquiry into the Separation of Aboriginal and Torres Strait Islander Children from Their Fam­il­ies/Stolen Generations.

Sadly it was too late for Robert Tickner’s adoptive mother; she had died, taking whatever information she had with her. It wasn’t until he was 41, hav­ing fathered a baby, that he decided to trace his birth mother. The birth of  Robert’s son Jack in 1991 was the event that gave him a deep sense of connection to family.
Having previously been hostile to the idea of investigating his origins, the new father now wondered. He wrote that his son's birth was "the catalyst for my change of heart and my increasing resolve that perhaps the time had come to lift the veil and see if my birth family were still alive - and if so, if they were remotely interested in meeting me".
Perhaps Tickner hadn't seen the tv series Find My Family; he had little under­standing of the tricky road ahead. The woman who had brought him into the world might have been a fall-down drunk for all he knew. Or a woman embittered by her life experiences.  He received a file from the adoption people and was advised to write a letter to his birth mother that would be passed on to her. She could then make up her own mind. In the letter, he assured her that he’d had a wond­er­ful childhood. Tickner also enclosed a photograph of himself starting primary school, taken at his grandma’s place in Merrylands in Sydney’s west, where he had spent most weekends. By chance, for almost a decade, his birth mother and adoptive grandmother lived only a few houses apart. Thus the title of the book. 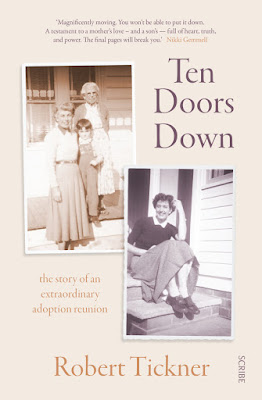 Ten Doors Down, the book written but Robert Tickner in 2002

In Jan 1993, Robert Tickner was standing on the Sydney Opera House steps, waiting for his biological mother. He saw a wom­an coming from Circular Quay, a tiny blurred speck in the distance. But he knew. He just knew. He ran down the stairs shouting: “It’s me! It’s me! It’s me!” The woman hadn’t seen him since she kissed her baby goodbye in 1951, but she too was beyond excitement.
He wrote beautifully about the relationship he built with his birth mother, from 1993 until her death. The book was mainly about the two of them, but Tickner was also honest about the difficulties he faced towards the end of his political life. He lost the seat of Hughes when John Howard came to power in 1996, and then lost his marriage. He drove around the country, depressed about being unemployed, but was too embarrassed to seek professional help. 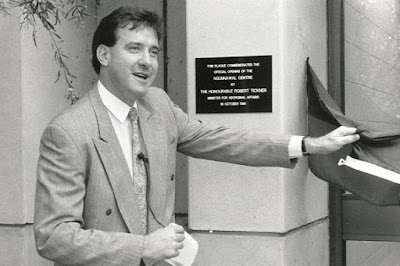 Opening of the Ngunnawal Centre,  1990
Fed Minister for Aboriginal Affairs, Hon Robert Tickner.
In time Tickner became chief executive of the Australian Red Cross, a job he held for a decade (2005-15), a period of great growth and peace. Under his leadership, Australian Red Cross trained in­dig­enous people throughout the country to work with communities and to deal with issues of Aboriginal violence, health and diet. Then he founded the Justice Reform Initiative and is its current chair.
Tickner’s story led to a reunion with his birth father and siblings, but now you will have to read the book!

Gary Coles has also written some books on adoption, adding something special from the father's perspective. He calls the father "invisible" and the experience "disturbing".

That is a heart warming story. I remember him well enough and what interesting backgrounds some people have.

I think this story was on Australian Story some time ago. I am SOOOOO glad he met his birth mother . I will find that book .It sounds like a great read.

I read Ten Doors Down in bed and flooded the pillow with tears. If Coles' books are less emotional, I will read them next. Many thanks.

This is a serious subject. No advertising please.

I understand why the government and church policies on adoption used to be so secretive, but the mother and children paid a huge price.

Robert Tickner did extremely well as a government minister, Red Cross and the Justice Reform Initiative but he too lost years of important family relationships.

Agreed. Programme like Find My Family, Long Lost Family and Australian Story were essential in exposing the difficult situations families found themselves in. I never miss them on tv, even now.

There was such a shame attached to unmarried mothers in the 1950s and 1960s, I imagine nobody in a dominantly Catholic country like Brasil wanted to talk about the babies. And I wonder if adopted children in Brasil are now allowed to seek out their biological parents, once they are 18.

Hello Hels, I admit I see both sides of this story. Sometimes the reunions are heartwarming, but sometimes painful stories are simply uncovered and revisited. If the parents giving up their children for adoption were guaranteed anonymity, that should be respected.
--Jim

Sometimes family reunifications are tender and loving, just like some children adore their parents in normal family circumstances. Others definitely do not. We can only prepare uniting children, siblings and parents for all possible eventualities.

But the laws about anonymity changed in most legislations. In most places, adopted children can invite their biological parent(s) to meet, after their 18th birthday if both want. The trouble was that until the 1990s, files were not necessarily maintained with the biological parents' details.