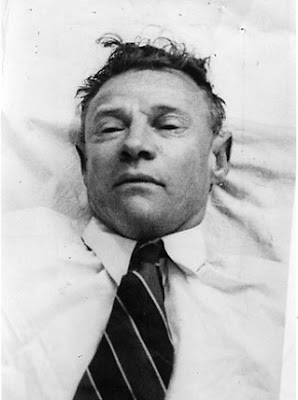 Police photographed The Somerton Man
straight after people found the body on the beach.
Slumped against a wall on Somerton Beach Adelaide, on 1st Dec 1948, was a man’s body. On the shiny stretch of sand, surf and sun, his hair was fair and his eyes grey. He was in a brown suit, with a clean-shaven face and seemed to be c40. He had a cigarette on his lapel and his legs were crossed. 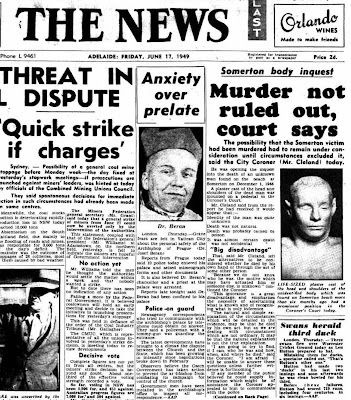 Newspaper articles appeared on the front page.
ABC News showed the identity and cause of death of the “Somerton Man” remained a mys­t­ery ever since 1948. Was he a Cold War Russian spy? Perhaps he kill­ed himself when told he could not see his lover and baby son?
Two young jockeys were riding horses along the beach. They saw the man, but continued along for a couple of ks south to­w­ards Brighton. When they came back he was still in the same place, clearly dead. A third man, on the beach at the same time, contacted police.

Post-WW2 it was not uncommon for police to find bodies on the beach. But there was something that differentiated this death from other deaths eg by suicide or al­co­hol. The man had not washed ashore and his clothes, all of which had their labels removed, were dry. All they found were combs, cigarettes and matches, used bus ticket to the area, an unused train ticket and chewing gum.

A post-mortem discovered the “Unknown Man”/Somerton Man had a badly en­larged spleen and int­ernal bleeding in the stomach and liver. Since the coroner found no indication of violence, he was compelled to find that death probably resulted from poison.
In Jan 1949 a suitcase holding lots of ordinary domestic items was found in Adel­aide Railway Station's cloakroom. The suitcase had been booked in the day bef­ore Somerton Man’s body was disc­ov­ered, and police suspect­ed it was his. In it were clothes and a waxed thread not sold in Aus­tralia, the same kind used to repair the unid­entified man’s trous­ers. "Keane" and "Kean" were the only words found on items in a suit­case; all the other cloth­es had their tags removed.

Intriguing evidence was found 4 months after the death. A pathologist re-examining the body found a slip of paper in the man’s pocket, say­ing Tamam Shud. These words, torn from the Rubaiyat of Omar Khayyam poetry book, were translat­ed from Persian as “it is finished”. 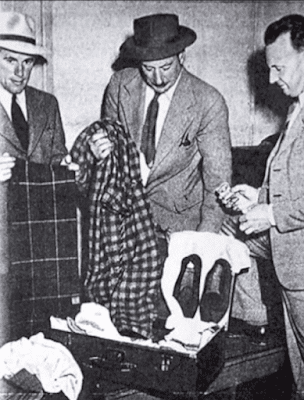 Police found a suitcase in Adel­aide Railway Station's cloakroom, Jan 1949
Was it placed by the Somerton Man, the day before he died?

A slip of paper in the dead man’s pocket, say­ing Tamam Shud
Shortly after the first Coronial Inquest concluded, police app­ealed to the pub­lic to find the book with the missing Persian words. Coming for­ward was the chemist John Freeman, who lived near where Somerton Man was found. His brother-in-law had been reading the poetry and when they drove to their dest­in­ation, the book went into the glovebox. Mr Freeman went out to his car and pulled out the book. And, on the last page, where the Tamam Shud would have been, the words were mis­sing. He cont­act­ed his brother-in-law who denied knowing about the book.
Then the book revealed other clues: a sequence of letters, believed to be a code, and two telephone numbers. One phone number bel­ong­ed to a nurse called Jessie Thomson and she  too lived close to where the Som­erton’s Man’s body was found! When she spoke to police in July 1949, she told them she HAD owned the Rubaiyat of Omar Khayyam book, but denied know­ing the Somerton Man. The police showed her a plaster bust of Somerton Man, but never revealed why she behaved strangely when she saw it.

The original coronial inquest left the case unsolved. SA Attorney-General recently approved an ex­humation order because the case still generated intense pub­lic interest, and today’s avail­able technology is WAY ahead of the techniques av­ail­able back in 1948. Now (in May 2021) police are exhuming the Somerton Man from his grave in the Ad­el­aide’s West Terrace Cem­etery. Under the com­bined expertise of SA Police and For­ensic Science S.A, this exhumation might develop a DNA profile and solve the VERY cold case. But even if the DNA is in perfect condition, who will it be compared to? 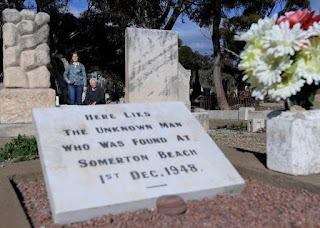 The tomb of The Unknown Man,
West Terrace Cemetery Adelaide
Adelaide Uni researcher Prof. Derek Abbott warned about the pro­s­pects of an identific­at­ion. He noted that finding a match would be dif­f­icult, gi­v­en that Somerton Man had been em­balm­ed in form­ald­eh­yde to pres­erve his body. And because researchers may need up to 800,000 DNA markers.
SA Police opened their inquiry with the Major Crime In­vestigation Branch. Gen­et­ic testing on Somerton Man’s hair revealed only that the man’s mot­her had European ancestry. Jessie Thomson died in 2007, six years be­fore her link to the invest­igation was made public. Rumours whirled that her son, ballet dancer Robin Thomson (died 2009), was the biol­og­ical son of the Unknown Man. In 2013, Jessie’s daughter said her moth­er knew the identity of Somerton Man but wouldn’t say anything.
Prof Abbott became more personally involved in the story while re­searching the connection between the Some­r­ton Man and his ?son, Robin Thomson. While Robin had died by the time Prof Abbott made the conn­ect­ion, Robin’s daughter Rachel Egan was alive and well. Prof Abbott contacted her, and before long, the two got together and married. Prof Abbott said comparing the DNA of his wife and the Somerton Man, her ?grand­father, could prove whether or not Robin was the Somerton Man’s son. And whether Jessie Thomson had been in a relationship with the mystery man.
Now that 1] the exhumation has been achieved and now that 2] the key players are dead, the truth may be revealed.
Posted by Hels at 25.5.21

Helen thanks for asking me to read this article. I hope that the medical geneticists who specialise in DNA testing do find a DNA link to someone in Australia or elsewhere. Even if they don't, and they probably won't, there seems to be a lot of non-DNA evidence in your article that should still be followed up.

Your not the only one who thinks a DNA link to other people is improbable. I understood from the ABC that normal criminal DNA tests use something like 23 markers, whereas this one will use about 800,000 DNA markers. So the researchers will have to be very lucky in their search of the genealogical databases to find distant relatives. I hope they are.

Hello Hels, Although it does have its mysterious points, I am not sure what is so special about this case that justifies all this effort and expense decades later. It does seem that many of the people involved do not seem too eager to air the story. Perhaps it was their personal scandal, but then why all the cut labels, etc.?
--Jim

This is the stuff of fiction! There could easily be a novel or film made of the story - but only after a resolution I suppose.
In response to Jim (Parnassus, above): I think murder cases are never closed.
CLICK HERE for Bazza’s meaningfully mendacious Blog ‘To Discover Ice’

Its a fascinating story . I have always been intrigued by the fact that all the labels on his clothes had been removed. Who Does that!!!! ??? I bet he was a person who needed to stay anonymous.

I had expected that the DNA labs would pick up this project with the rest of their work, so that there would NOT be a huge and separate bill. But the Attorney-General told ABC News that the State Government had offered its conditional support for an exhumation, provided it was privately funded. A Go Fund Me effort didn't raise enough money, but now South Australia Police have paid the (huge) costs.

it sounds so fictional that I had to check my sources MANY times. The more I read, the more it sounds as if the Somerton Man victim knew what was going to happen, and planted clues that would definitely be found. Even his body was smartly dressed and openly located on the day of his death.

It appeared that there were a number of people who knew what was going on but they kept their silence back in 1948... and they have died from old age since.

I am not sure the Somerton Man was a person who needed to stay anonymous OR if he wanted others to suffer AFTER he was definitely dead.

Hi Hels - how very interesting ... I do hope something can be gleaned and that embalming hasn't disenabled the bones being tested. Here we traced a chap who died in 1341, Sir John de Strychley, in Stirling Castle ... so things might be forthcoming - but embalming is another matter. I know you'll follow up ... so as time passes I hope we hear more. Fascinating - cheers Hilary

I have made my living for 30 years reading and lecturing in History and Art History, most of the time having a fun time. But you are correct...not to often are we totally fascinated by a topic.

I love the idea that you could trace a 14th century bloke from Stirling! It shows we are becoming more and more clever in our analyses of the past.

this has been such a lengthy, complicated project, I think we are all going to learn a lot - the South Australian authorities of course and all of us ordinary people.

The exhumation took ages and was completed. But now that we have gone into Phase 4 Covid restrictions, I assume the expected time lines will be messed up. I will definitely come back to the blog if more information becomes available.

That sounds like a very interesting case! Hope the efforts are not in vain. I'm just writing a short post on the two genealogical companies (Ancestry and My Heritage)involved in the DNA industry. Genetic DNA testing is a very fascinating topic1

My knowledge of the importance of Genetic DNA testing rests solely on tv programmes like "Find My Family" and and "Long Lost Family". But although I have no scientific background myself, as a result of stories like The Somerton Man I am reading more broadly. I will look forward to your post.