The Amelia Earhart tragedy - accident, Japanese threat or spying for the U.S? 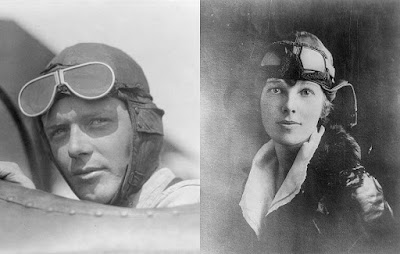 Charles Lindburgh and Amelia Earhart
Amelia Earhart (1897-1937) was a Kansan who learned to love fly­ing while attending a Toronto air-show in WWI. She enjoyed flying lessons and set a women’s altitude record of 14,000’ in 1922, but wasn’t yet committed to a flying career. She studied health at Columbia Univ­ersity and then was a social worker in Boston, becoming the only female member of a local pilots association.

George Palmer Putnam, pub­lisher of Charles Lindbergh’s 1927 book "We", was looking for a female Lindbergh to replicate the suc­c­ess of the first solo, non-stop flight across the Atlantic. In 1928, fascinated by Earhart & her similarity to Lind­bergh, Putnam invited her to be a passeng­er on a transatlantic flight. In Jun 1928, on the an­nivers­ary of Lindberg’s Paris journey, she became the first woman to fly ac­ross the Atlantic and back. The two married in Feb 1931, and he became her pub­l­icist/backer in the May 1932 flight.
In her 1932 memoir The Fun of It, Earhart wrote flying may not be all plain sailing, but the fun of it was worth the price. Perhaps not, but she actually was a best selling author. Her career got going. She paid for her flying by being a writer and public speaker. Her publicity stunts paid well too; in 1935, she was paid heaps to become the first person to fly from Hawaii to mainland U.S.

Purdue Uni engaged the World’s #1 Airwoman to run a career centre for women, and she inspired many to switch from cooking to engineering and to the aviation industry. But by 39 this role-model for women knew she had only 1 more noteworthy flight in her. For her last proj­ect, she began by flying from Oak­land to Miami, where she announced she would fly around the world.
She took off 1st June 1937, and en route, reported regularly to the U.S media. After leaving Darwin on 30th June, Amelia and her navigator Fred Noonan stopped at Lae New Guinea, before leaving the next day for the longest and most dang­erous leg of the flight. But they disap­peared in the central Pacific Ocean. somewhere on their way to Howland Island, 4,113 km ms away . 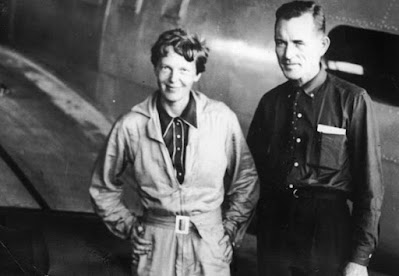 Amelia Earhart and her navigator Fred Noonan
A search was quickly organised, but where would they look? The Coast Guard cut­ter Itasca, which had been sent from San Diego to Howland Is, could have taken directional bearings on the Earhart plane, if only it had tuned its signals better. And the Itasca‘s com­mander might have sear­ch­ed better, if the plane had radioed its position often. But after New Guinea, NO pos­it­ion reports were received.

When word that the Earhart plane was lost reached the U.S, hus­band George Putnam sent a telegram to Pres Roosevelt. In any case the Secretary of the Navy had already ordered the Navy to start searching. The battleship Colorado launched small planes from its deck but they saw nothing rele­vant. By week’s end, the Colorado’s planes had scanned 100,000+ square miles.

The Itasca went on with its patrol until they ran out of petrol. The minesweeper Swan landed searchers on Canton Is. And the air­craft carrier Lex­ing­ton, with 62 planes aboard and an escort of 4 destroyers, left San Diego, refuelled in Hawaii and continued into the search area.

Dozens of amateurs continued to report messages from the lost plane’s radio, but Navy radio experts doubted them. If the Lex­ington’s great fleet of planes could not find the lost flyers, the Rear Admiral who coordinated the search would abandon it. The flyers would not be alive by then. The oceans had claimed another aircraft in similar conditions to Kingsford Smith’s tragic disappearance in 1935 during his flight to break a UK-Australia speed record. 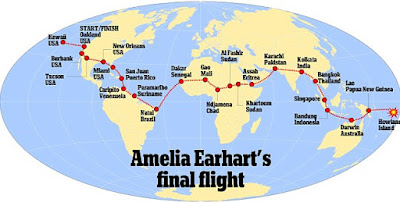 Later the Navy told the court that Earhart and Noonan had no petrol left, crashed into the Pacific and drowned. So a court declared her legally dead in Jan 1939. That tragic end was the result of years of searching for Earhart and decades of specul­ation about what had happ­ened. But while the formal search end­ed, the citizen search was just beginning. Earhart’s death laun­ched conspiracy theories that continued.

Some blamed Japan, America’s WW2 enemy, even though Pearl Harb­our didn’t happen for another 4.5 years. The theory proposed that the pilots had landed on the Marshall Islands, then-Japanese, and were taken prisoners.
And in 1970 the book Amelia Earhart Lives, by former Air Force Major Joseph Gervais argued that Earhart was on “a spy mission for Pres Roosevelt, interned in Japan during the war and traded back to the U.S in 1945, where she lived on.

In 1991, TIME reported that the FBI confirmed a clue to her last landing site; an aluminium map case was rec­ov­ered by aircraft archaeologists on an atoll near Howland Is. More recently, a Nat­ion­al Arch­ives photograph was discussed showing that Earhart and Noonan died on an atoll in the Japanese Marshall Is­lands. Ted Waitt, producer of biopic Amelia, financed as recently as 2009 a robotic search of the ocean floor near Howland Is, to find the plane.

My best reference was Museum of Fine Arts and Sciences NSW. For the top modern theories about Amelia Earhart's disapp­ear­ance, and for modern search projects, see National Geographic. A very interesting blog is Amelia Earhart.

She was a spy for the U.S. She was captured, and was beheaded on Saipan, along with her co-pilot Fred Noonan. Remember that the first rule in spying is that a captured live spy has no country. The country that sent you can't admit that they did, and the country that caught you frequently won't admit they have you. Neither Japan nor the U.S. was ready to start WWII four years early and so she was expendable on both sides.

Nothing really conclusive to me.

Charles Lindbergh was a symbol of racism, neglect of wives and mistresses, neglect of children, pro-German views in war and anti-Semitism. Amelia Earhart was a symbol of modernism, hope, determination, women's achievement and brave adventurism. She was very special.

everybody was fascinated by the projects, lectures and writing of Amelia Earhart. But for women, in particular, she gave them hope for a more equal and adventurous future.

Saipan was an island in the western Pacific Ocean, captured by the Japanese in the WW1. And so I might have readily believed that she was there with a specific national role. I also acknowledge that neither the Americans nor the Japanese could afford to be honest about their role in protecting (or not) Amelia and Fred. But where is the solid evidence for this theory?

*nod* every single theory has been offered by people desperate to know what happened to their beloved national heroine. But nothing stands out.

Both started their careers as much respected national heroes. But by 1941 Charles Lindbergh had gone too far. Because of his favourable reports about Nazi Germany, Lind­bergh was seen as a Nazi sympath­iser. He even had to resign his military commis­s­ion at the demand of Pres Roos­e­velt. And any political ambitions he had ever had ended with a crash.

But at least he lived to a decent age and with a decent income. Our other national hero died in her 30s, without being buried with dignity. And her young husband was devastated.

Hello Hels, As with most conspiracy theories, I tend to believe the simplest explanation, which in this case is that her place was lost in the ocean. Her flight around the world had to be pretty dangerous, otherwise there would be no publicity value in the stunt.
--Jim

Her flight around the world was very dangerous yes, and I imagine Amelia was a bit of an extra risk taker. But it would not be too conspiratorial to ask why, when there was a clear problem, did she or her co-pilot not speak to the closest radio operators and give them some information? NBC News said dozens of previously dismissed radio signals were actually credible transmissions from the two pilots. The transmissions started riding the air waves just hours after Earhart sent her last in-flight message.

Hi Hels - she had an extraordinary life ... I wonder why she said she had only one more long flight left in her ... but I guess travel of that sort was always dangerous ... very interesting to read though - thanks ... all the best for 2021 - Hilary

Hello again, Thanks for the link. After looking at your comment and viewing the NBC article, the mysterious flight signals seem to support the idea of a simply lost or damaged plane. If her last transmission was near Howland Island and reported problems, there seems to be little question left as to her fate. The article is very not very scientific and begs more questions than it answers: What exactly were the signals? What back then made them credible or dismissible (as opposed to what an AI computer algorithm can interpret), why would they "dismiss" signals when her flight was well known and publicized, etc.
--Jim

All of the pioneer aviators were incredibly brave given so many came to dramatic ends in pursuit of their passion. I dare say thrill-seekers all and in the modern era would probably be indulging in base-jumping and such terrifying pastimes. Did you see the news snippet a couple of years ago about further analysis of the measurements of the now lost European bones found in 1940 on Nikumaroro Island?

AE’s transatlantic flight took place in 1928 and could not have taken place on the 5th anniversary of Lindbergh’s flight in 1927.

Amelia had lived such a very busy, famous and productive life that she wanted to spend some quiet years as a normal wife in an excellent home. Yes she would have continued to write and to lecture, but this would have been the last long plane trip. And yes, she knew the risks.

oops, you are correct. Thanks for reading the post closely :)

Correct. No-one would dismiss signals when her flight was so well publicised around the world! Read History on the same topic: In her last radio transmission, made at 8:43 am local time when she disappeared, Earhart reported flying “on the line 157 337...running north and south,” a set of directional coordinates that describe a line running through Howland Island.

I am a total coward, so thrill seekers seem to me to be a very risky lot :)

The European bones found on Nikumaroro Island in the Western Pacific were fascinating. These bones were originally dismissed by a researcher as male remains. Then recently a set of bones matching those lost in 1940 were found in an island museum. Suddenly people were asking if the bones might have been Amelia's. DNA testing will be very helpful in confirming, or otherwise, her ownership of the bones. But in either case, it won't explain how/why the plane crashed.

This is fascinating stuff, and I’m guessing that it will be keeping people entertained for a long time to come, but I, personally, am not into conspiracy theories and believe the simplest explanation: the plane crashed and they died.

the 1930s were a truly horrible time, so Americans had emotionally invested even more in Amelia Earhart than they might have otherwise. She was such a pioneering role model that a mere accident seemed improbable, even to non-conspiracy theorists.