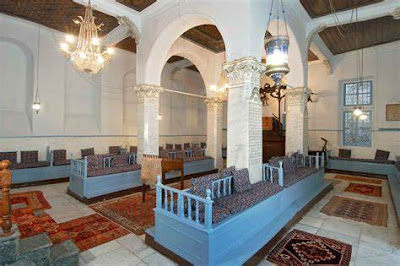 Bikur Cholim Synagogue
The Jerusalem Post reported that Izmir is Turkey’s third largest city with c4 million people. Izmir aka Smyrna is the principal seaport of Western Anatolia on the coast of the Aegean Sea.

The Jewish community in Izmir goes back to the C4th BC. The city’s oldest district, Kemeralti, was home to the densest concentration of Jewish landmarks in Roman Turkey. After the conquest of Jerusalem, Alexander the Great brought some Jews to Izmir. But during the Byzantine Empire, the data were unclear.

There were some strictures placed on synagogues planners in the Kemeralti district. They could not build structures that were higher than the mosques. So the synagogues were relat­ively small and intimate, but they were always special.

There was no record of the Jewish community there when the Ottomans conquered the city in 1424, although the expulsion of Jews from Spain and Portugal in the late 1490s was a piv­otal juncture in Jewish presence in Turkey. The most detailed information about Jewish commun­ities in the Ottoman rule came when the Sephardic Jews settled in Izmir, as it became an import­ant trade centre in C17th. Jews did have to pay the Ottomans a poll tax, but they were free to pract­ise their rel­igion unhindered, to run their own rabbinical courts and to impose penalties on sinners.

In the C19th, the Jewish population in Izmir was c20,000. Turkish Jews had a lot more freedom than European Jews and fewer riots. They did not experience the Inquis­ition, they did not go through WW2 nor the Holocaust. And Turkish Jews had much bet­ter relat­ions with the state authorities than European Jews. Nonetheless post WW2, the local Jews started to immig­rate to the newly founded Israel. Today only 2000 Jews are living in Izmir. 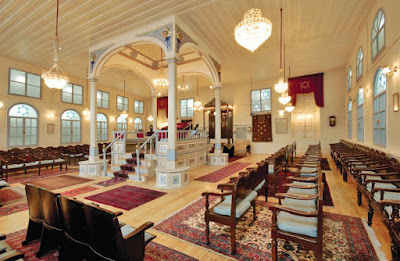 Algaze synagogue
The synagogue descriptions and photos come from Eskinazi. Algaze Synagogue is one of the many synagogues in the Karatas district, built in 1724 by the Algaze family. Restorations in the C20th saw the bimah/reading platform loc­at­ed in the centre of the building surrounded by 4 columns and elevated by 4 steps. The interior of the Algaze Synag­ogue in Izmir is still light and airy.

Shalom Synagogue is one of the oldest synagogues in Izmir, built in the C16th, opposite Algaze Syn­ag­ogue. The building survived the great fire, but needed two restorations in 1800 and 1841 anyway. The elevated bimah is surrounded by 4 columns and its ceiling has amazing geomet­rical shapes. The arch­ed recesses running along the southern wall stands out, as does the unusual seating arrangements with cushioned ben­ch­es set against the perimeter wall. This syn­agogue, like the vast majority of others in the now large­ly neg­lect­ed market quarter, became a Sephardic community.

Signora Giveret Synagogue, built by Donna Garcia Mendes in the C16th, is also in the Karatas district. Originally built in Sephardic-style, 1841’s great fire damaged the synagogue, so the Yerushalmi family reb­uilt the build­ing entirely in a basilica design.. Seats of the synagogues are lin­ear, and like the other synagogues in Izmir, the bimah is close to the ark. The hall is decorated by landscape art.

The Bikur Holim synagogue, founded in 1724 by Dutchman Shalom de Chaves, incorp­orated a vibrant mix of yellows and greens. The sumptuous interior des­ign, with fine wood and marble str­uct­ures and fit­tings, and delightful fres­coes above the bima pillars, has frieze-like ceil­ing partitions. The building was devastated by fire twice and was beautifully restored both times.

In a 1904 order, Ottoman Sultan Abdul Hamid wanted Beth Israel Synagogue in the Karatas district for the Jews living locally. This synagogue was built in the church form, a result of the Italian ef­fect in the C20th, and has two bimahs that were elevated by 4 steps. It remains very active.

Shaar Hashamayim Synagogue is the second most active site in Izmir. Its original look was lost because of restor­ations, and because this synagogue is now all concrete. It was built as 3 floors and the bimah is elevated by two steps. 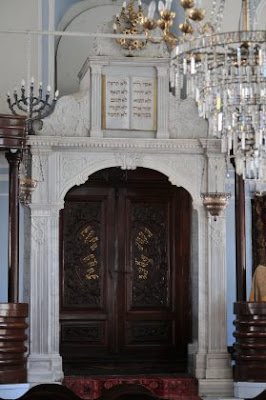 Marble ark and chandeliers
Signora Giveret Synagogue
Izmir was divided into five separate districts: Muslim Turk, Armenian, The First Juderia-Jewish, Greek and Levantine districts. At that time Izmir hosted 34 synag­ogues that served, in the great 18th & C19th, a local Jewish population of c50,000. Today only 13 synag­ogues remain, and some of them are back-to-back. The proliferation of prayer houses and the ability of Jews to maintain their their herit­age in Izmir was largely due to the local authorities’ benevolence.
Mordechai Kiriaty Foundation sponsored Izmir Project will restore and conserve 9 synagogues. The Foundation’s goal is to create a Jewish cultural centre and Museum under one expansive roof, incorp­orating the 9 buildings. The First Juderia is a unique quarter of Spanish-Judeo synagogue architecture that fed off the Golden Age of Spanish art and culture, and some Italian.
The Kiriaty Foundation is supported by prestigious inter­nat­ional organisations eg the Eur­opean Council and World Monument Fund. Local sponsors include the Turkish Minis­try of Culture and Tourism. And note ic­onic architect Daniel Libes­k­ind is designing the Izmir Jewish Her­itage Visitors’ Centre. 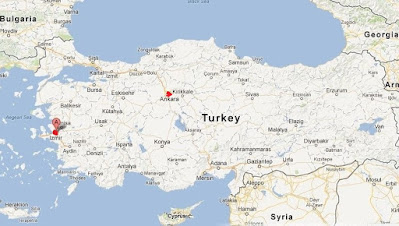 Map of Turkey
Izmir on west coast
As Izmir is located very close to Kusadasi Port, the private Izmir Jewish Heritage Tours cover some synagogues, old Jewish neighbourhoods, C16th Rabbi Shabtai Tzvi’s home and the ancient city of Sardis and its old synagogue ruins. Sardis was an ancient city that had a Jewish community in the C4th BC. Archaeologists found the Sardis Synagogue ruins during an excav­ation in the 1960s. The rect­angular structure of the building was 120 ms long and 18 ms wide, big enough for c1000 people. The floor had wond­erful mosaics that showed the community’s high economic status!

Great photos in Eskinazi. Some interiors have rigid, dark seating, all facing the front. Other interiors have long cushioned benches facing each other across the centre, with no darkness to be seen.

Every country has its cultural and historical institutions that have fallen apart over the centuries. I am so proud of Turkey for putting the expertise and resources into their old synagogues, hospital, Rabbinical House, museum and archives etc

It is far easier to socialise with other people in synagogue when you are not sitting bolt upright and facing the front.

The Algaze synagogue is such a beauty! Calm, soothing, beautiful colours - and as I am interested in architecture I am happy that I discovered your marvellous blog, thank you!

Hello Hels, It is good to know that the synagogues in Turkey have had such an active history, and that now the historic buildings are receiving the support of the government. I was especially interested in the excavation of the Sardis synagogue. There is a short Wikipedia article, and many beautiful photos if you do an internet search.
--Jim
p.s. Coincidentally, I was just thinking of the word bimah because I needed to look up the Chinese name of the castor-bean plant, and it turned out to be 'bi-ma'.

I have been lecturing and writing on history and art history for decades, but spouse and I have only spent one fortnight in the western half of Turkey. It was both a surprise and a delight, but it meant there was a great deal of reading awaiting our return home :)

A bimah is the platform in the synagogue on which the reader stands at the desk, in order to read the Torah. Or a raised theatre stage. So although some words travel from one language to another language, "Chinese castor beans" is probably not be one of them :)

The ancient city of Sardis and its old synagogue ruins were only added at the end of my post because Izmir Jewish Heritage Tours included the area. But I know that some of our group were more fascinated by the ancient synagogues than they were by the early modern buildings.

Hi Hels - I know so little about Jewish history ... it's always interesting adding that extra snippet of knowledge into the brain bank ... and even worse I hadn't realised that part of the geography of the region ... still each tiny part adds a little. So much to learn ... stay safe - Hilary

Turkish culture, history and architecture were always fascinating, but until the first time spouse and I ended up in Izmer, I don't think we would have discovered the history of these extraordinary synagogues in person. When Covid has ended across the world and travel is possible again, we must go back to see the completed renovations.

Istanbul is the city where trump of religions, you can see Mosques, Churches and Synagogues. Our tour guides are well experineced and licensed who will really take care during your tour and you will be all illuminated about the Jewish lifestyle, highlights and history.

Nowadays, Jewish committee has only around 27-28.000 of members that mostly lived in Istanbul. We have created a perfect itinerary for you to explore best jewish sites of Istanbul.

The Tour highlighs are specially selected by Istanbul tour guides that will help you to witness the life of Jewish People in Istanbul.

Ashkenazi Synagogue; Built in 1900. It has 21 Tora’s, with 7 floors inside, shaped as Spaceship and vault reminisce of space.

Etz-Ahayim Synagogue; Named from the Synagogue of Bursa, First settlement is not exactly known however we saved the description from the fire which proves that it was re-built by Avraam Kamondo. It has 3 Midrash at the garden,

Istanbul Jewish Museum; First settled inside of Kal Kadosh Synagogue in Karakoy area, converted into museum in 1992 under the lead of Quincentenniel foundation. Served till 2015 later moved inside the Neve Shalom Synagogue.

Book now on www.privateistanbulguide.com Istanbul Jewish Heritage Tour Details
Istanbul Jewish Heritage Tour contains walking as well as drive. We suggest you to wear casual cloths and comfortable shoes.
The tour Duration is 6 hours.
The tour price includes transportation.
Please, Inform us in which hotel you are staying in order to organize pick-up.