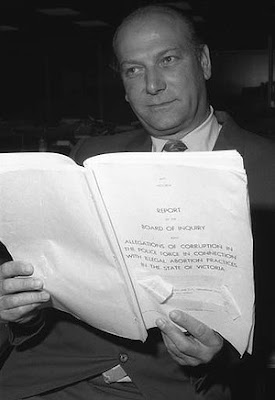 Dr Wainer read the Board of Enquiry into Police Corruption
in 1971 (top image)
Bertram Wainer (1928-87) grew up fatherless in Gorbals, Glasgow’s poor district, during the Great Dep­res­­sion. He had to go to work after primary school. Fortunately the lad immigrated to Aus­tralia, worked, returned to high school and joined the Aust­ralian army, the institution that funded his medical studies. He studied tropical medic­ine at Sydney Uni then spent 2 years in Papua New Guinea before taking charge of Brisb­ane’s biggest milit­ary hospital. Acting Lieut Col Dr Wainer only quit the military in protest over the Vietnam War, in 1966.
Women’s rights didn’t become an issue to Bert until after he had a medical practice in Melbourne; in 1967 a young woman collap­s­ed in his surg­ery, haemorrhaging from an il­l­egal abort­ion. She refused hos­p­it­al for fear of arrest so Bert treated her in the clinic! After that, Dr Wainer dedicated his life to women and fam­il­ies.
Abortion Law Reform Association/ALRA campaigned from 1966. It was there, at meetings of the ALRA, that Jo Rich­ard­son and journalist Lionel Pugh met Dr Wainer. At an ALRA meeting Wain­er proposed doing a test case. If it was breaking the law, the pol­ice would arrest them and they could argue it in front of a jury.
Bert was angered by safe illegal abortions being av­ailable only to the wealthy. He was further outraged when the police raided Dr James Troup’s gynaecology surgery in 1968, seizing private medical files. Between 1967-71, ill­egal abortions in the two biggest states (NSW, Victoria) were the largest single cause of maternal deaths.
In Feb 1968, gynaec­ol­ogist Dr James Troup and Sister Peggy Berman were arrested in Melb­ourne by Inspector Frank Holland, and ch­ar­ged with abortion offences. Mrs Berman had been forced to carry sums of cash (in a wheelbarrow) on behalf of her boss, over the years, functioning as a go-between for the doctor and senior police­men, Vic­toria Police homicide squad chief Jack Ford and Jack Matt­hews. Brave Peggy Berman provided sworn testimony about the police protection rackets.

In 1969, Dr Charles Davidson was charged with an abortion crime. Victorian Supreme Court Justice Cliff­ord Men­hen­nitt, in his landmark Common Law decision of 1969, found a doctor not guilty of perf­orm­ing an illegal abortion on the grounds that a lawful ab­or­tion is one believed by the doctor to be necessary to preserve the woman from serious dan­ger to her life or her mental or physical health.
The Menhennitt ruling established the Common Law right to legal ab­ortion, the decision meaning Victorian doctors could perform a legal abortion if the danger of con­tinuing the preg­nancy was greater than that of termination. Yet despite the Menhennitt rul­ing that Dr Davidson was not guilty, Vic­t­oria’s written Civil Law re­main­ed unchanged.

So Dr Wainer set out to test it. He organised abortions for 3 women, one a poor immigrant mother who had 9 children, and publicly invited the state to prosecute. Aw­are of the widespread public support for abortion reform, the government refused to prosecute him.

Women were demanding reproductive rights
in most cities in Australia and elsewhere
Wainer’s fight against the abortion laws brought him into dir­ect conflict with the police and the Conservative state govern­ment. So to expose cor­ruption, he obtained many sworn affid­avits from witnesses involved in the illegal abortion rack­et, women willing to risk police victimisation. These plans demanded enormous personal sacrifices from Dr Wainer and his fellow camp­aig­ners. Journalists pub­lished the evidence, even though Lionel Pugh must have known the risk of him being murdered by the police was high.

Wainer then placed newspaper ad­ver­tisements calling on women to con­tact him with their evidence. Inevit­ably the doctor and his closest supporters were subjected to ongoing violence and intim­idation. In 1969 Dr Wainer was stab­bed by unknown men and left for dead; his sister’s home was fire bombed; and both he and Jo Wainer were shot at! In 1970, Pugh’s young body was found in a Parkville street with a shotgun and a “suicide” note. The autop­sy found that Pugh could not have fir­ed the shot that killed him. Even the corr­upt­ion evid­ence that Pugh had been coll­ecting disap­p­ear­ed from his home when he died.

With the help of a journalist Evan Whitton, Wainer rel­eased the aff­idavits to the press. Public pressure forced the government to call a formal inquiry into police corruption. A 1971 Board of Enquiry into Corruption in the Police Force was pub­lished and presented to both Houses of Parliament. Headed by my cousin Judge Wil­liam Kaye, it revealed organised graft since c1953. Each of the corrupt policemen was named individually and his crimes revealed, Superintendents Ford & Jack Matth­ews being gaoled for 5 years and others less. Read Dr Wainer’s own book It Isn’t Nice 1972 . 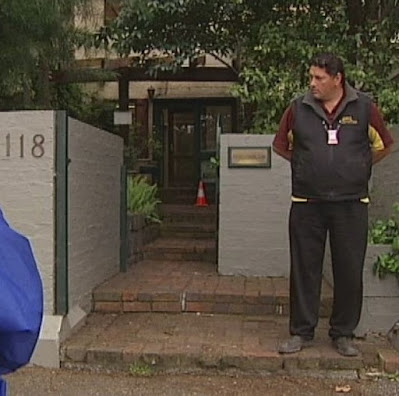 Fertility Control Clinic, East Melbourne, opened 1972
The beautiful gardens and entrance were protected by high walls and a guard
for whenever protesters harassed families going inside.
Wom­en and families had won. In 1972 Dr Wainer and 3 other doct­ors set up East Melbourne Fertility Control Clinic/FCC. It off­ered pub­lic access to Medibank funded contraception, abortion & steril­is­ation, and counselling. I was head psychologist at FCC from Jan 1976 on.
Bert died of throat cancer and myocardial infarction in 1987. At his funeral the Unit­ing Church minister described him as a man of justice, determination & compassion, moved by human suffering. NB abortion wasn't removed from Victoria’s Criminal Code until 2008, 21 years after Bert died. 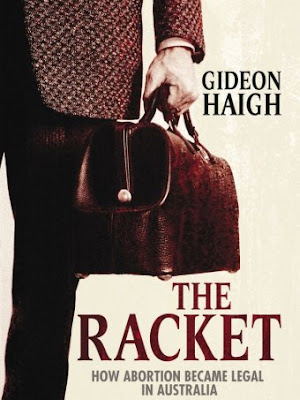 Read Gideon Haigh’s book
The Racket: how abortion became legal in Australia.
Posted by Hels at 17.10.20

I visited the clinic in the mid 1970s. I was more afraid of the protesters outside than I was of the police. Thank you, Dr Wainer.

I hope you do too. I think blogs written by citizens from other countries are the best way to get a honest picture of those countries. Tourist agencies tend to publish only glorious reports.

by the mid 1970s, abortion was already legal in this state. So the police would not have been at a clinic dealing with abortion; rather they would have moved on to other more pressing issues.

But I do remember the picketers and protesters very well :( They mainly verbally attacked women patients without husbands, thinking that no-one could defend the patients. Fortunately the clinic always ensured that a member of staff could offer a protective arm around patients in the street. Note that Safe Access Zone legislation came in recently (2015), protecting patients from harassment.

Interesting that a sports writer has written his bio. What a great man, and he came from the Gorbals in Glasgow! I wonder if the protestors are still outside the East Melbourne clinic.

Readings said Gideon Haigh focused on the pre-1969 story of corruption in high places and human suffering in low places. Haigh was particularly skilled in courtroom drama and in political machinations, so what might have been a sleazy description of police criminals turned into a sensitive, historical analysis.

The protesters/hecklers cannot stand anywhere _in front_ of the clinic since the protective legislation came in. But they _can_ stand on the other side of the road.

An interesting account of a man who really cared.

A few people dedicate their lives to save women, orphans or whoever needs them. But their first priority surely has to be their own health and safety, and that of their family. To die in one's late 50s is a terrible tragedy.

Hello Hels, We need to be grateful to so many people for our relatively safe, abundant and interesting lives. Many people researched breakthroughs or created art in relative peace, but how much more do we owe to those, like Dr. Wainer and Lionel Pugh, who literally put their lives on the line every day working for their belief in a better society.
--Jim

that is so true. Rosa Parks refused to go to the back of the bus, was arrested and suffered poverty because of the moral stand she took in segregated Montgomery Alabama. Despite not being certain what would happen to her and to other black citizens, she bravely took the morally upright position. Rev Martin Luther King even more so. He took every opportunity of using his powerful racial equality values, knowing he would probably be killed by haters.

I would not be so brave.

Well Hels , I have learnt more about you and I greatly admire your courage and your convictions. Thankyou for your service to we women.The corruption around abortion clinics was truly revolting , somehow worse that other corruption . It seems to me that we are again fighting the fight against these overwhelmingly white bullyboy men who feel entitled to run the show . It truly makes me feel sick at times. Lets hope the US sees off one of their most noisy members very soon.

thank you. The corruption around abortion WAS truly revolting. But it wasn't based on religious commitment to saving foetal lives; rather it was based on making untold money from terrified women and vulnerable gynaecologists. It is ironic that senior policemen and politicians gratefully relied on those same gynaecologists when their _own_ wives were seeking help with unwanted pregnancies.

Even if Thump is put in gaol for the rest of his life, American women are still anxious about their Senate and Supreme Court, both anti-woman institutions.

This article considers Australian laws within the context of the right to equality, to privacy and to health. After setting out the human rights framework and noting the connected nature of many of the rights, the article then analyses Australian law and practice within this framework. It considers the importance of decriminalising abortion and regulating it as a standard medical procedure.

Thanks so much for this. When I posted "Canadian Liberals and American Libertarians" on Wordpress I had no idea Australia had lagged so far in the era of Comstockism, race suicide fears and papal infallibility. Ireland's recent self-emancipation gives some hope, yet rare is the voter who realizes that the Roe v Wade decision “(a) For the stage prior to approximately the end of the first trimester, the abortion decision and its effectuation must be left to the medical judgment of the pregnant woman’s attending physician. …” was copied from the Libertarian Platform by the Supreme Court 45 days after a woman's first electoral vote was counted. The original version said “We further support the repeal of all laws restricting voluntary birth control or voluntary termination of pregnancies during their first hundred days.” This drew the boiling wrath of Wallace Dixiecrats and Republican National Socialists. Only recently have their platforms quit demanding addition of a girl-bullying amendment to the Bill of Wrongs. See "Libertarian Party Jurisprudence"

Mems might like to read Catch-22 by Joseph Heller. Yossarian wants a medical discharge but all Doc Daneeka can think about is the money to be made performing illegal abortions back Stateside:
'Isn't it worth a try?' Yossarian argued. 'What's so hot about Pianosa?'
'Pianosa is terrible. But it's better than the Pacific Ocean. I wouldn't mind being
shipped someplace civilized where I might pick up a buck or two in abortion money
every now and then.'
Daneeka saw his job as 'To uphold the ethics of the profession and never give testimony against another physician.'