The Romans, lovers of great beauty, valued the spectacular scenery and temperate climate of Surrentum, hovering over the cliffs of the Sorrento Peninsula. Romantic Sorren­to stands on the grey rock on the south­ern side of the Gulf of Naples. In time, the nobility and the artists of all media arrived, to enjoy the Mediterranean climate and amazing scen­ery, and to find renewed inspiration for their work.

But Sorrento was also a place of history and culture, commen­cing from the Greek-Roman town plan that is still preserved. There are archaeological relics in local mus­eums or along the roads of the town centre, as well as beautiful churches and aristocratic palaces. Note, for example, the C14th Cloister of St Francis with Arab travertine inter­lacing arcades. Fam­ous visitors of the past were very learned eg Ibsen and Goethe.

Grand Hotel Excelsior Vittoria is located in the town centre and sitting on a high cliff overlooking the Bay of Naples and Mount Ves­uvius, it is the very same place where the Roman Emperor Aug­ustus’ own attractive villa had been. You can still see the C18th columns, frescoed ceilings and antiques displayed throughout. Easily recognisable from the sea, the hotel's three classic C19th build­ings are just above the town harbour, on a cliff top location, and surr­ounded by the lush greenery of a Mediterranean garden. 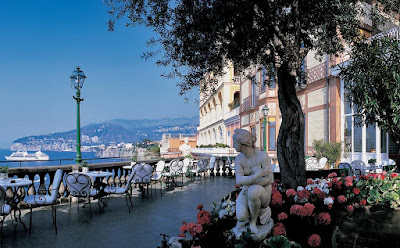 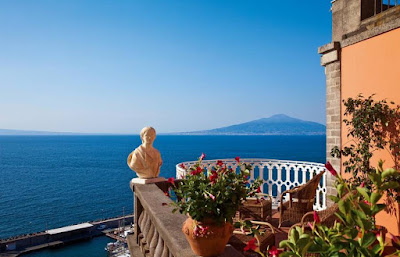 The hotel occupies the site where Roman Emp­eror Augus­t­us once had a beautiful villa. Grand Hotel Excelsior Vittoria has been owned by the Fiorentino family since its opening in 1834, and had their three independent build­ings built from 1834 on, in fin-de-siècle style. Note that 1834 was a time when Italy was not yet a unified country! And note also that the family's 5th gener­at­ion is still running the hotel today, maintaining a long tradition of warm Italian hospitality.


A quick elevator ride moves visitors up from the port, directly to the hotel. From the main terrace, the lift descends directly down to the pier in the harbour below. Visitors go to the pier if they want to hire a motor boat to travel along the beautiful peninsula coastline, or take a trip to Capri, Naples and the Ischia islands.

The sumptuous interiors still contain a great number of the orig­inal pieces of antique furniture first used to decorate the hotel, including beautiful pieces of the inlaid wooden furniture from local cabinet makers. The great majority of the 92 suites lead out on to a balcony or terrace where to enjoy views of the Bay of Naples or the sweet scented orange grove which surrounds the hotel.

The luxurious suites retell the story of the many famous visitors. Over the years, the hotel was part of the Grand Tour and has welcomed monarchs, politicians, artists, celeb­rities. Some royals were regulars eg Queen Victoria of Sweden (for whom the hotel was named), King Louis of Bavaria, Prince of Wales, Catherine Grand Duchess of Russia and King Rama VII of Siam. 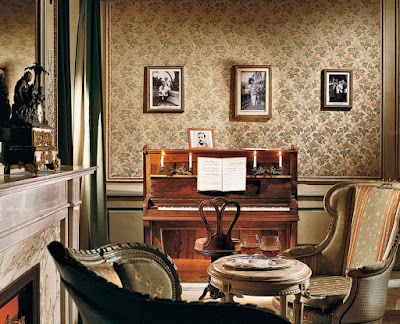 Aranci Suite overlooks the hotel's orange and lemon groves. The Enrico Caruso Suite retains the same décor and furn­ishings as when the famous Italian tenor stayed there for more sev­eral months, in 1921. Pompeii Suite is decorated with frescoes inspired by Pompeii’s attractive villas. 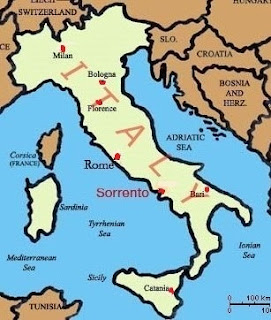 
Occupying a once el­eg­ant green-house among the green ol­ive, lemon and orange trees, the hotel also established the Bout­ique Spa la Serra; it has citruses in their luxury spa treat­ments. Sorrento’s jagged cliffs are dominated by watch­towers, caves and enchanted bays, set against the clear Mediterranean Sea. It's a place that invites walk­ing-trails, water sports and places to bathe and relax in the Mediterranean sun.

World of Wanderlust has beautiful photos.

Yes, yes, yes. The views from Sorrento, and the Island of Capri, are heaven on earth.

A sad thing to admit, but it is unlikely I will ever the very beautiful Sorrento or stay in such a hotel.

Heaven is right! The Sorrento peninsula and the Bay of Naples are gorgeous, very blue and tranquil. I suppose the area used to be invaded by every nation in the area, but Sorrento became the winter home of Europe’s aristocracy from 1800 on. That was when the gorgeous houses and hotels were built along the cliff-tops.

When we were young and impoverished, we travelled around Europe one long summer, sleeping in YMCAs or in caravan parks. But even then, I inspected every hotel and gallery, taking photos and collecting historical pamphlets. It was the only way to really appreciate how the Good Life happened.

Hello Hels, These views are indeed spectacular--every inch of Europe seems layered with fascinating history. We all need "rich uncles in Australia" to leave us piles of money so we can stay at and explore these places.
--Jim
p.s. I finished My Brilliant Career a while ago. While I did find Sybylla herself a little sour, I loved the old Australian milieu, and marveled that the book was produced by Miles Franklin at such a young age.

ALWAYS place an aunt, uncle or first cousin in any city that you are going to want to visit. I had close relatives in Sydney, Perth, Winnipeg, Vancouver, New York, Boston, London, Manchester, Paris, Tel Aviv, Jerusalem etc and stayed with all of them for free at some stage or another. But I have never had anyone to stay with in Italy, Germany, Austria or Greece, so we had to pay for a B&B or hotel like anyone else :(

Of course that means that all those people have come to stay with us in Melbourne ha ha.

We have actually stayed in this wonderful hotel! It is truly as you describe it. There is a lift/elevator built into the cliff-face that takes you down to the quayside where we boarded a ferry to Capri. The Victorian plumbing in the bathroom is a fascinating network of copper pipes with a free-standing bathtub. I also remember the lovely walk at the entrance through a shaded garden. The walls were covered with photos of notable people who had stayed there - including Mussolini! I couldn't afford it these days...
CLICK HERE for Bazza’s enormously escapist Blog ‘To Discover Ice’

a facility is only special if it both _participated_ in its region's geographical and cultural history, and _reflected_ both those histories. Otherwise every hotel in the universe may as well be built in the exact pattern of Budget Inn Boise! You are so fortunate to have stayed in Grand Hotel Excelsior Vittoria, and in very good company as the rooms indicate eg Luciano Pavar­otti and Andrea Bocelli :)

thank you for your Comment. But you didn't mention the hotel, the town or the bay even once.

I will start saving :(

quite right! Everyone has a wish list of important things in their life - travel, books, antiques... whatever makes your heart beat faster. After all, you could always put off eating until next year! Or wear hand-me-down clothes from the rest of the family!

I don't think any suite going to be name after me, and that ok.
Coffee is on

The advertising says the hotel is a temple to the kind of opulent, old-world glamour for which Italy is famous. Once a stop on the Grand Tour, it’s played host to Marilyn Monroe, Luciano Pavarotti and Sophia Loren, among countless other luminaries.

I tended to poo poo the list of lumunaries after which the suites were names. But in this case it seems to be totally true. So now I must admit to lusting after Pavarotti, and would love to sleep in his bed :)