History of the best game in the world - Scrabble

Australia didn’t have television until Nov 1956, and computers came even later. So our family entertainment back then consisted of radio programmes, swimming, card games, Monopoly and Scrabble. In that era, I assumed these activities were all Australian or British.

But not Scrabble, clearly. New Yorker Alfred Mosher Butts graduated from the University of Pennsyl­vania with a degree in architecture in 1924 and worked for a few years before the Great Depression hit and he lost his job. Butts saw that millions of other Americans could use some fun during the bleak economic times. After determining what he believed were the most enduring games in history — board games, numbers games like dice or cards and anagramic letter games — he combined all them all. He then chose the frequency and the distribution of the tiles by counting letters on the pages of the most im­p­ortant New York ­pap­ers.

For more than a decade he re-examined the rules, and designed the 15×15 gameboard, while trying to att­ract a corporate sponsor. Unfortunately the Patent Office rejected his applic­ation several times. At first he simply called his creation to Lexiko (in 1931), then Criss-Cross Words.

In 1948 a retired social worker/ game-loving entrepreneur James Brunot approached him with an offer to mass produce and sell the game. Butts readily handed the operation over. In Newtown Connecticut, Brunot brought in the now well recognised colour scheme (pastel pink, baby-blue, indigo and bright red), invented the 50-point bonus for using all 7 tiles to make a word and changed the game’s name to Scrabble.

In 1949 Brunot and his family made up the boxed sets in a con­verted former schoolhouse in Dodgingtown, part of Newtown - Brunot and several generous friends manufact­ured 12 games an hour. When the chairman of Macy's, Jack Straus, saw the game on holiday in Florida and decided to stock his shelves with it, the game expanded rapidly. Brunot made 2,400 sets in the first year of business but the venture was still losing. By 1952, Brunot's home grown assembly line was churning out more than 2,000 sets a week. Nearly 4 million Scrabble sets were sold in 1954 alone. 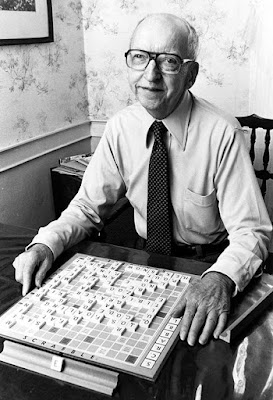 In 1971 Brunot sold the rights to Selchow and Righter Co., to mar­ket and distribute the game in the USA and Canada. Ironic­ally this was one of the game firms that had previously turned down Butts’ product. In 1972 they bought the trademark to the game. Butts received a total of $265,000 in royalties; Brunot got nearly $1.5 million. 2 years later they made and sold c4 million sets.

Coleco Industries Inc. took over after Selchow collapsed in 1986 and when Coleco in turn went bankrupt, when the game was sold to Hasbro. Today, Scrabble is owned by Hasbro in North America, while rights in the rest of the world belong to Mat­t­el.

In 1994, the Scrabblesphere changed when Hasbro announced plans to remove nearly 200 words deemed too offensive for the official Scrabble dictionary. The list of words ranged from ethnic slurs to playground phrases like turd. Hasbro eventually compromised and published two officially sanctioned dictionaries — one for recreat­ional and school play and the other for official tournaments and clubs; the latter contains a total of 120,302 words. Are there more words still, if British English spelling (used in UK, Australia, New Zealand, South Africa, India etc) is differentiated from American English spelling.

Scrabble has been translated into 31 non-English languages. Oddly, the game is sold outside the USA by Hasbro's rival, Mattel Inc. By the early 1990s, thanks to its acquisitions of Milton Bradley (maker of Yahtzee) and Parker Brothers (makers of Monopoly and Trivial Pur­suit), Hasbro owned over 50% of the $1.1 billion USA games market. But in 1993, Mattel outbid Hasbro, paying $90 million for the international rights to the game.

As Scrabble grows old, it still ranks as the 2nd best-selling board game in American history, beaten only by Monopoly. How many sets have been sold? c150 million sets have been sold world-wide. In the UK (where Scrabble was originally manufact­ured by Spears Games, a sub­sidiary of Mattel), it’s believed that one in two households own a set. And with the on-going evolution of the English language over the decades, will the Scrabble tiles need to be revalued?

I wonder if anyone remembers Alfred Butts; he died in 1993 aged 93. Fortunately Butts typed every detail on a docu­m­ent titled Study of Games, which, with many other artef­acts from the history of Scrabble, now belongs to Butts’s great-nephew. Thanks to BBC History Magazine, 12th July 2018; BBC, 11th Sept 2015 and Time, 7th Dec 2008. 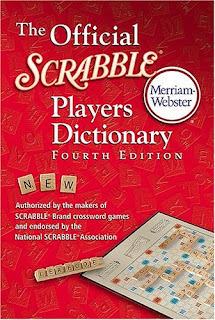 In the film Sometimes, Always, Never, a Scrabble-obsession is emblematic of a complex communication crisis. Alan (Bill Nighy)’s mastery of the game has taken him along a certain type of loneliness spectrum. He is simultaneously very good with words and absolutely terrible with them. He can’t make contact with son Peter (Sam Riley) and vice versa.

And yet, Alan has far from given up on life: to Peter’s exasperation and dismay, he continues to be an assertive personality, airily dapper, liking everything just so in ways that can’t simply be written off as dysfunctional. He has a positive effect on Jack, showing him the correct way to wear a suit. The “tailoring-mentoring” scenes here have great wit and humanity. Alice Lowe, Tim McInnerny and Jenny Agutter are also superb in their roles

How interesting. The mind boggles at how it could work in Chinese or Japanese.

Helen
I asked the device-connected grandchildren if they ever played Scrabble. They hadn't heard of it. Shame.

every language (that doesn't use Latin letters) has issues that had to be overcome. For example Hebrew has 100 tiles, covering every consonant but no vowels. Russian and Ukrainian Scrabble sets, which both use Cyrillic letters, each contain 104 tiles. Japanese is well covered in the literature, but who knows about Chinese tiles?

oh yes... I know about device-connected grandchildren. Fortunately Scrabble is well and truly computerised which they can find in
1. Facebook, when playing with friends
2. Pogo, against a random opponent or
3. ISC, for tournament style games.

You probably don't know what those 3 places are, but the youngsters will.

Hello Hels, Although there must have been Scrabble sets around when I was growing up, I don't recall ever playing the game. Actually, I have never been much of a games person. My twin obsessions were being outdoors and reading.
--Jim

Hi Hels - I love scrabble and will if given a chance always play ... it's good for all ages. I have bought travel scrabble too - so I can have a game available at home ... but interesting to read about the back-story. Cheers Hilary

I agree with you about children spending their fun time outside, but only in the warm weather. In winter, family togetherness is maximised in shared activities facing around a table, not everyone staring at their individual screens. It might be Scrabble, chess, cards, board games, charades, quiz nights, fancy dress or anything else.

Travel Scrabble is a great idea! Taking children on long trips in the back of a car can be quite boring for them, and distressing for the driver.

I have always been a lover of board games and Scrabble is on I played often as a child.

I am not entirely convinced about the banned words. There is a Scrabble dictionary but the official dictionary for scrabble tournaments in the Uk was the Chambers Dictionary. I am not sure if that is still the case now.

Salon says in the early 1990s, people were playing Scrabble in Washington DC. At one point in the game, a word was challenged. The players decided to settle the dispute by checking the Official Scrabble Players Dictionary. However, in skimming the pages, they stumbled across horrible words and were appalled. The pair found every possible slur against Jews, blacks, Hispanics, Catholics, gays and genitalia.

The words pansy, chick, dick, faggot, bitch, homo, and the like are all hateful slurs, but they all have alternative, harmless meanings. So these words survived the cut, with the offensive definition deleted from the Scrabble Dictionary. And as the Dictionary only goes up to eight-letter words, long crude words are in any case excluded. After months of debate, the Official Scrabble Players Dictionary was revised in 1995 with 175 words removed.

Who knew it was so contentious?

Hello again, Your response to CherryPie reminded me of a famous story: A woman told Dr. Johnson, "I admire your dictionary because it contains no dirty words," and he replied, "I certainly hope, madame, that you haven't been looking for them!"
--Jim

the response was cute :) But it also is telling... because offensiveness or dirtiness are both in the eye of the beholder.

For a proper tournament, there has to be agreement on which words are banned, BEFORE the games even start. But if I am playing at home against the neighbours, I don't want to have the word "bum" fought over because it means "arse" in British countries and means a hobo in the USA.

My wife constantly plays Words With Friends, a Scrabble-like online game and a cousin in the USA was a semi-pro Scrabble player. He would fly to weekend conventions all over the States and showed me some of the tricks that the 'pros' use! Naturally I wouldn't dream of revealing them...
CLICK HERE for Bazza’s probably perverse Blog ‘To Discover Ice’

Words With Friends has two great assets. Firstly it expands the playing group beyond those available in your suburb.. the entire English-speaking world is welcome to play. Secondly, and this is vital to us Baby Boomers, if we don't keep our brains well used, they will go to mush :( Scrabble-type games are the best way to keep mush at Bay.