Did Trump pervert "The American Dream"?

James Truslow Adams (1878-1949) was a wealthy Am­erican who decided to leave banking and go into writing. He won the Pulitzer Prize for his series on New England history 1921–26. And his Epic of America 1931 was an international best seller. He was also the editor of a scholarly multi-volume Dic­tionary of Am­erican History and co-editor of The Album of Amer­ican History 1944. It is to Adams that the term The American Dream must be credited.

In The Epic of America, Adams wrote “The American Dream is that dream of a land in which life should be better and richer and full­er for everyone, with opportunity for each according to ability or achievement. It is a difficult dream for the European upper classes to interpret adequately, and too many of us ourselves have grown weary and mistrustful of it. It is not a dream of motor cars and high wages merely, but a dream of social order in which each man and each woman shall be able to attain to the fullest st­at­­ure of which they are innately capable, and be recognised by ot­h­ers for what they are, regardless of the fortuitous circumstan­ces of birth or position.”

Adams felt the American Dream had been in peril since WW1 ended. He complained that money making and material imp­rovements had become goals in themselves, mimicking moral virt­ues. But the original American Dream, that lured tens of millions of foreigners to the USA, had not been a dream of merely material plenty.

The Epic of America was Adam’s attempt save a priceless heritage, and sustain the distinctly American under­st­anding of progress in humane and moral terms. The true American Dream was of a genuine, individ­ual search and striving for the abiding values of life, and for the common man to rise to the top in the free realms of communal, spiritual and intellectual life.

Adams remembered that in the 1916 presid­ent­ial election, the rival candidates presented similar formulae to the voters: the Republican Charles Evans Hughes advocated "America First And America Efficient", while Democrat Woodrow Wilson promoted "America First". But beneath the banality of phrase, early C20th America was a country haunted by anxiety about the purity of its ethnic stock; a land of public lynchings where white families watched blacks hanged.

In May 1927 there were violent, racist fights at New York’s Mem­or­ial Day parades when protesters confronted Ku Klux Klan marchers. In Queens there were seven arrests: 5 avowed Klansmen and 1 person arrested by mistake and immediately released. The 7th man was arraigned and discharged, not notable except for his name: Fred Trump, President Donald Trump’s father.

By the 1930s there were local imitations of European Fascism eg the Crus­ader White Shirts and the German-American Bund, but in many res­p­ects American Fascism was the bitter fruit of the obsession with America First. 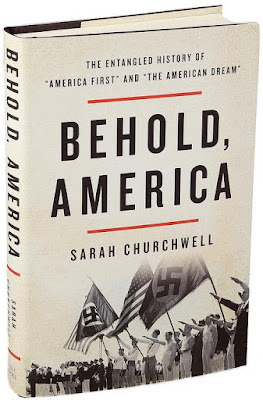 Now a new book. Behold, America: A History of America First & The American Dream, written by Sarah Churchwell (2018) shows that the version of American values espoused by Fred Trump’s son Donald and the hate-filled racism of the Unite the Right rally in Charlottes­ville were not aberrant blips. Rather, racism, nativism and the neo-Fascistic call of America First were part of the changing modern American experience. Far from being an ephemeral spasm of protest against globalisation, Trump-style American nationalism has long been integ­ral to American political life, though usually marginalised by both parties’ leaders.

Donald Trump used both these phrases (America First; The American Dream) in his campaign and presid­ential inauguration. Church­well reminds the reader that neo-Fascism, white supremacy and economic and political exploit­at­ion have long supported the dark underbelly of American society. We can rel­at­e these Trumpian values to wider social, polit­ical and cultural developments.


So how did it happen that American Dream, an expression conceived in terms of social and economic equality, now refers to the opport­unities ONLY open to fortunate individuals who are born rich or rise from rags to riches? The Guardian said the original phrase functioned as a “corrective, not as an incentive”, trans­mitting “moral disquiet” about the dangers of runaway capitalist excess. Originally the rise of a plutocrat class founded on vast concentrations of wealth was deemed to be un-American, because it threatened the cherished American dream of equality and social justice. But in time, the notion was turned inside out, becoming instead the anaesthetising fantasy which doused equalitarian aspirations in the underclasses.

Despite the fact that he was born into immeasurable wealth, Trump positioned himself as a self-made man, the epitome of the American dream. In fact this “modest”, “self made” man now occupies the White House, meaning he is personally living out the American dream! The easy equation of white, mega wealthy and American seems lud­icrously outdated, but since Trump’s election and the Charlottes­ville disaster, it has become sinister and permanent.

So.. the expression American Dream was conceived as a warning against rampant capitalism, meant as a moral appeal for Americans to protect opportunity for all, rather than facilitate the ascendance of a few. That such a central notion to the American sense of self has since morphed so dramatically is frightening. In tracing the origins of these terms, and charting their evolving twists, Churchwell reflects modern American history itself.

As an Australian, I recognise that the American Dream was always specifically the dream of one part­icular land, the USA. Adams wanted a life that would be better and richer and fuller for every individual, with opportunity for each according to ability or achievement. But British and other liberal democracies would have said “accord­ing to the needs of each individual”, not according to the indiv­idual’s ability or achievements. Universal health care, for example, would not have been guaranteed in Adam’s American Dream.

To pervert Adam's philosophy, Trump would have had to read Epic of America. But since Trump is functionally illiterate, he must have waited for Fox News to give the abbreviated version.

Hello Hels, What complicated issues you have opened up with this post! I think we have already mentioned Sinclair Lewis' novel Babbitt, which showed the lengths the powers in control went to in order to insure their selfish version of Adams' vision.

"Leaders" like Trump get supporters by making promises of prosperity to their constituents, promises on which they have no intention of delivering. Paul Fussell would have understood the operating principle, which is the same as the intense-to-the-point-of-irrational support of a successful sports team. By identifying with a theoretical "winner," even though they gain no advantage themselves (in fact, they lose considerably), the idiots at least get to claim psychological victory through membership in the "leading team." That is, until they go bankrupt trying to pay for medical care or exorbitant health insurance.
--Jim

interesting that you should say that! I used to think it didn't matter than Trump couldn't understand books very well... after all he had all his very smart advisors to write his speeches and practise getting the philosophical issues right.

But now I think his advisors cannot control what philosophy comes out of Trump's mouth, even if his speeches are already pre-prepared. In 2018 Trump said that "Britain has tough gun laws but that their hospitals are awash with blood because of knife wounds. They say British hospitals are as bad as military war zone hospitals ... knives, knives, knives."

I suppose every leader in every generation in every country has had to get, and keep his/her supporters, unless elections have been cancelled. And it seems inevitable that all leaders may be manipulative to some extent, and power-hungry to some extent. Yet even when the leaders have been from parties I could not EVER vote for, I don't remember being mortified at hearing the views that came out of their mouths. Nixon, for example, might have been a criminal, but I could understand every view on which he was expounding.

While we may not have The American Dream, I fear we are following what happens in the US rather too closely, and I don't mean reading or watching about it. Regarding your last comment, some political leaders the world over are just beyond the pale, which is quite different to not respecting them as a leader, regardless of politics. I don't think the has been such a leader in Britain in the recent past, nor here, although who knows where Abbott may have taken us.

“In the last two years, ICE officers arrested 235,000 criminals who were able to come in over the years through the United States.” President Trump said at the White House, Jan. 2.

Which books or reports was Trump citing? Which of his expert speech writers gave him these data?

I too don't believe that Britain, Australia or New Zealand had prime ministers who were such liars, you didn't know from one month to the next which philosophies they believed in.

I thought Mrs Thatcher, for example, was horrible, but I trusted her consistency and reliability totally. But if Thump is pushing one world view today, we have no expectation WHATSOEVER of him remembering that world view next week. He will lie, forget, obfuscate, backtrack and attack any member of his team who still promotes last week's view.

if I was saying something as provocative and outrageous as "thousands of illegal immigrants are in Texas jails for child sex crimes", I would be citing the proper books or reports in detail. Why don't his speech writers tell Trump never, ever, ever to cite "findings" without reliable evidence.

Hello Hels, Proof and sources are not necessary, because intelligent people don't believe spouted nonsense, while those incapable of thinking or checking on something believe whatever they are told that supports their bigoted views.

Hello Hels, To change the subject to a more pleasant one, that combines sad and interesting aspects, I wonder if you saw this story on the Mark Hill blog (he usually writes about modern ceramics) about some remarkable artistic detective-work concerning Modigliani's last days and his friend, the artist Marevna, also known as 'Marie Vorobieff-Stebelska (1892-1984)':

thank you. Marevna, whose name I did not know, lived in and near my absolutely favourite Paris art community of La Ruche from 1912 until 1936!! I thought I knew them all.

Poets Max Jacob and Max Voloshin, artists Diego Rivera, Chaim Soutine and Ossip Zadkine!! And partying with Pablo Picasso, Juan Gris and Modigliani.... what a life. And talented too - great portrait of Modigliani.​

That's a really interesting article, Hels. Slightly off-topic, but related, one thing that really bothers me in the UK is the way that politics - and politics is life - has become so polarised (and it's not just Brexit). Trump strikes me as illustrative of that in the US - and, anyway, he's a bully who lacks elegance and style.

You are totally correct about polarisation in lots of countries. In the past voters were indeed on an Left-Right wing continuum; and most people saw themselves as middle-of-the-road Labour or middle-of-the-road Conservative. That continuum has not changed but the distribution of voters along that continuum has. There are now far more people on both extremities, AND the hatred between the two main parties is increasingly bitter.

It almost doesn't matter what the issue is: Brexit in the UK, elimination of pro-democracy organisations in Hungary, taxation in France, xenophobia in the USA, pro-gun policies in Brasil etc.

Parnassus we have committed party supporters in this country, but Trump's 'base' is a new word. It may be true that many people do not have the energy or intelligence to read about politics or the economy, but those people still have fully formed views. From Fox News?