In July 1918 Bolshevik revolutionaries, acting on Mos­c­ow’s orders, shot Czar Nicholas II, his wife Alexandra, four daught­ers (Grand Duchesses Olga, Tatiana, Maria and Anastasia), their son Tsarevich Alexei Nikolaevich and four servants. Their bodies were taken from the Yekaterinburg cellar, in the Urals, and buried in the forest, yet a rumour got out that the body of the Grand Duchess Anastasia had not been accounted for. Did she hide in the closed cellar?

Since 1918 many women have presented them­selves as the missing Anastasia (or another sister). However only Anna Anderson and Eugenia Smith gathered substantial support. Thank you to True Crimes and Curiosities for much of the information . 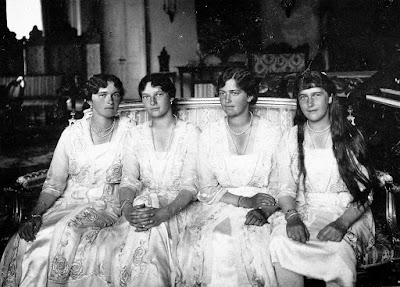 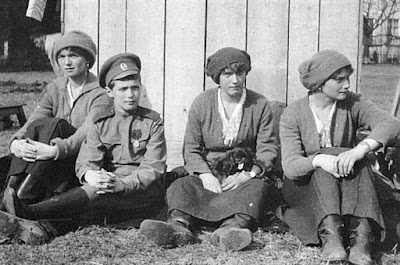 
Under house arrest in Tsarskoe Selo, 1917
Last known photo of the Romanov siblings


A] In 1920 Anna Anderson tried to commit suic­ide and was sent to a mental health centre in Berlin. One of the pat­ients took her for the Grand Duchess and later this legend was supported by Russian immigrants. Two years later Anna started believing that she was in fact the real Grand Duchess Anastasia. In 1928 she moved to the USA and lived off Rus­sian princess Xenia Georgievna, who was actually distantly related to the Romanovs. However, after failing to prove herself, Anna returned to Germany.

Those who had known Anastasia personally said Anna Anderson was an imposter, but most ordinary people bel­ieved her. So the Tsarina of Russia’s brother Ernest Louis, Grand Duke of Hesse, hired a private investigator in 1927 to find out who she really was - Franziska Schanzkowska, a Polish factory worker suffering from mental illness

For 20 years Anna struggled to get her name recognised by the Eur­op­ean courts, but failed. In 1968 she moved back to the USA where she married a wealthy man. And­ers­on died there in 1984 and post-mortem DNA tests finally disproved her claim of being a Romanov. As they did for every other claimant mentioned here.

I saw the film Anastasia: The Mystery of Anna (1986) decades ago.

B] Eugenia Smith (1899-1997) was born Eugenia Smetisko. Accord­ing to her naturalisation papers, Eugenia was born and raised in 1899 in Bukovina, an artist & writer who emigrated to the USA in 1929. In Chicago in 1963 she presented a book to a publisher which she said was a manuscript given to her by the Grand Duchess Anast­asia herself. Doubt­ing her tale, the publisher asked her to take a lie detector test, which Smith failed. So she then changed her state­ment, instead claiming to be the Grand Duchess Anastasia.

In her book, Autobiography of HIH Anastasia Nicholaevna of Russia, Smith adopted 1901 as her birth date, same as the Grand Duchess, and changed her birthplace to St Petersburg. Her auto­biography recount­ed her life in the Imperial family and how she escaped ex­ecut­ion by the Bolsheviks. And her many art works depicted scenes of her Russian childhood in the Imperial family.

Eugenia was a popular society woman when LIFE mag­az­ine featured her claims in an Oct 1963 story. LIFE pointed out that she had failed to convince: a) anthropol­ogists (who compared her features to Anas­t­asia’s), b) a hand­writing analyst (comparing the two women’s hand­writing) and c) a cousin-childhood playmate of An­astasia. Eugenia died in 1997 in Rhode Island. Because cremation is forbidden in Orthodoxy, Eugenia Smith was buried in Orthodox manner in the Holy Trinity Orthodox Monastery in New York.

C] Eleonora Kruger originally did not claim to be royalty, yet she had apparently written letters to the British King George V asking for help. She first claimed she was Anast­as­ia, then a merchant’s daughter, and then Anastasia again. Her changing claims led to her being inst­it­ut­ionalised in a mental hospital in Kazan on the Volga River, where she eventually died.

D] Marga Boodts first appeared in France just post-WW2. She claimed to be Grand Duchess Olga Nikolaevna of Russia, first daughter of Tsar Nicholas II and was considered to be one of the most successful claimants to the Romanov family. Having said she miraculously escaped the execution of the Romanov family, Marga collected money from the public to prove her cause. But in court she was arrested for fraud.

Marga appeared in court again in 1950, this time denying any know­ledge of her previous fraudulent activities. She could con­vince Nikolaus, the Hereditary Grand Duke of Old­en­burg and Wilhelm of her claim; he supported her finan­cially until their death. Only when Anna Anderson became famous did Boodts make her claim public - she did every­thing in her power to destroy Anderson’s credibility. And of course she wrote a book (unpublished) to tell the story of her family.

Boodts lived in solitude for the rest of her life in Italy, dying in 1976.

E] Ceclava Czapska was first noticed in 1919 in Romania where she was taken under the protection of Queen Marie of Romania. And it was there that Ceclava Czapska married Russian Prince Nicolas Dol­goruky, son of General Alexander Dolgoruky, and started claiming to be the Grand Duchess Maria of Russia. She said all members of the royal family, with the exception of her dad Nicholas II and the servants, escaped from being executed. Ceclava died in 1970 in Rome.

F] The last woman to declare that she was Anastasia was Natalya Bilikhodze, app­arently the heiress to a fabulous Georgian fortune, was aged nearly 101. Supp­ort­ers proved via a video press conference that Mrs Bilikhodze would visit Russia in 2002 when her real ident­ity would be acknow­ledged and the Romanov fortune would then be handed over to her. But it turned out that Bilikhodze had actually died back in 2000; the press con­ference video had simply been recorded years prior.

The canonisation of the dead Romanovs in Nov 1981 showed the Orthodox Church made them saints on the belief that they were all totally and irrev­oc­ab­ly murdered.

In 1991, the Tsar, his wife and 3 of their daughters were found in the woods outside Yekaterinburg. An exhaustive post mortem exam­in­ation con­firm­ed that they were the Romanovs. The family was buried in in a vault in Saints Peter and Paul Cathedral, St Petersburg.

This did not end the rumours because one of the four daughter might have still been alive. Then in 2007 the fourth daughter and the son were found partially cremated near Yek­ater­in­burg. It was never verif­ied if the fourth sister was Maria or Anastasia, but ALL the girls had been proven by DNA testing to be part of the royal family.

My grandma was born about the same time as Anastasia and only two countries away. She may have been a princess in the Romanov family! For goodness sake.

It seemed improbable (until DNA testing) that people would pretend to be Russian princesses for decades. Thus they were either in a psychiatric state of delusion or taking advantage of a chaotic political situation that no-one could have understood at the time.

However the implications were serious. Surviving royal cousins had to support the pretenders financially for decades. Court cases were endless, and very costly. Book publishers were tricked etc etc.

A student of History said...

Helen The librarian gave me this article from Russia Beyond, AUG 11 2017 by IRINA SIDOROVA

Michael Goleniewski was a Polish officer and counterintelligence agent, who cooperated with the Soviet KGB during the late fifties while employed by his country’s secret service. He became a triple agent by providing the CIA with Polish and Soviet secrets. In January 1961, he defected to the U.S. and officially started working for the CIA. The same year a Polish court declared him dead in absentia.

Some time later, while working in the U.S. he claimed to be Tsarevich Alexei, the youngest child and the only son of Tsar Nicholas II. According to Goleniewski, the whole family was still alive. Very few people believed him though. In order to prove his blue blood, Goleniewski tried to find his sisters. He had a “reunion” with the impostor Eugenia Smith, claiming she was his sister. Smith returned the favor, recognizing Goleniewski as her brother.

However, Goleniewski’s documents showed that he was born in Poland, 18 years after Tsarevich Alexei was born. In response, the pretender claimed that he was a hemophiliac (Tsarevich Alexei was born with this genetic disorder) which made him look younger than he really was. Few believed him and he was fired by the CIA because of his lies. Goleniewski fought to regain his “rightful” name until his death in 1993 – but had no luck.

I would have thought it would be reasonably easy to disprove the claimants' stories, even without DNA testing. Do you know how old Anastasia was when she was killed?

I have read a lot of the Romanov history, but this is the first time I have heard that Tsarevich Alexei might have survived the 1918 executions. Even if the Mos­c­ow orders had not included the four daughters, they most certainly would have shot Czar Nicholas II, his wife Alexandra and the only heir to the throne.

Anyhow now I will have to chase up Michael Goleniewski's history. Thank you.

Grand Duchess Anastasia, the fourth of the five royal children, was born 1901 and died in 1918.

If anyone on the planet was going to believe that Anastasia survived, it would have been because the truth was hidden for ages e.g. Yekaterinburg was remote (east of the Ural Mountains); the execution cellar was hidden underground somewhere; or young soldiers might have found Anastasia lovely enough to save her.

Hello Hels, Probably Anastasia is living on the same island with Elvis, President Kennedy, and Marilyn Monroe. The Anastasia impostors seem to be divided between the unbalanced and those seeking profit or publicity. A better question is why so many people are vested in Anastasia's having survived. I once went to a Fabergé show, and although I never had any use for the Romanovs, the popular interest in them and sympathy for them was intense.
--Jim

yes indeed. So many supporters of the Russian royal family desperately hoped and prayed that at least one child survived that they were prepared to listen to ANY supportive evidence. Russian emigres who fled to Europe during and after the Revolution in particular showed enormous sympathy for the Romanovs.

But Empress Alexandra's sister interviewed her "niece" in 1922 and didn't recognise the young woman at all. Soon after Nicholas II's sister Grand Duchess Olga also thought her beloved "niece" in Berlin was fraudulent. These were aunties who had lived with, or near their nieces until 1918!

You can see why people wanted to believe the imposters. I was always a bit sad myself that none of them were genuine .

none of them were genuine ... the women simply wanted a comfortable, wealthy and aristocratic life.

But so many ordinary people truly hoped and prayed that at least Romanov child survived, it turned out to be one heartbreak after another.

See the role of science in the lives of the last Russian royal family in an exhibition at the Science Museum, South Kensington. The Last Tsar: Blood and Revolution explores the influence of medicine on the Imperial Family – how they treated conditions such as the heir Alexei’s haemophilia, the Tsarina’s fertility, Red Cross medical training the Tsar’s daughters received – as well as recent advances in medicine and forensic science. Open until late March 2019.