We need to start with Germany's unification in 1871. Although the German Empire went on to become a European colonial power unt­il the end of WW1, it might be difficult for the modern historian to see how colonial power entered pub­lic cons­ciousness. Certainly not from Otto von Bismarck and the politicians in the Reichstag who felt they had enough
problems to deal with, inside the new German nation.

However it must be noted that there were many geog­raphical assoc­iat­ions and colonial societ­ies in Germany. And there were many German citizens who moved to the colonies, temporarily or for the long term: missionaries, civil serv­ants, military people, settl­ers and merch­ants.

In 1884 Bismarck reluctantly changed his mind. In order to protect trade, to safeguard raw materials and ex­p­ort markets and to build capital investment, he approved the acqu­is­ition of colonies by the German Empire. 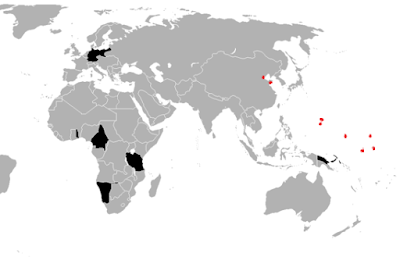 As a straggler in the race for colonies, Germ­any had to agree to four less-than-desirable Protectorates.

C) To protect German trading interests in the Pacific and to take ad­van­tage of British failures, the German Government annexed north eastern New Guinea in 1884. The Marshall and the Sol­omon Is­lands were annexed in 1885. The Germans took over Nauru, then annexed Samoa to acquire forced labour for its plant­at­ions.

D) In China, Qingdao Treaty Port became the German bay conces­s­ion of Tsing­tau, leased by the Qing Dynasty. From 1898-1914, it was the cent­re for German commercial development in China and a base for the Imp­erial German Navy.

German military forces had to battle against many angry marches, to lock up or execute local trouble makers. Perhaps it was because Ger­many became involved in empire building much later than the other Europeans, and were therefore less experienced. Africans resisted the an­nex­ation of their territories, which led to violent colon­ial wars. Genocide in Namibia was infamous as one of the first examples of gen­ocide in the C20th. Between 1904-05, tens of thousands of rebelling Herero and Namaqua died when the German army destroyed supplies of food and water. Afterwards, the colonising army drove refugees into the Namib Desert. 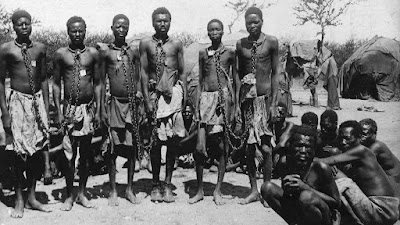 Germany committed its first mass deaths in Namibia against the Namas and the Hereros, from 1904 to 1907, often in camps.

In Tanzania in German East Africa, the 1905 Maji-Maji War was another devast­ating event for the local population. The Maji Majis had to work in labour gangs to build roads and grow cotton, but they died from largely from German-organised famine.

Even in times of peace, the military forces employed the Maxim machine gun to rein­force their rule and bring home the super­iority of the Europeans to the colonised peoples. The machine gun was sometimes used to decimate whole groves of trees in a short period of time to engender fear, or destroy food.

These genocides were a source of tension between the German Empire and other European powers, espec­ially Britain and France. This was even though a] Germany did not have the military resources to ser­iously compete and v] Britain and France had their own colonial wars and their own brutal colonial histories.

A conference was organised by Chancellor Otto von Bismarck, with represent­at­ives of 14 nations, but no Africans were invited. The General Act of the Berlin Conference of 1884-5 formalised the Scramble for Africa, and eliminated most existing forms of Afric­an self-rule. Ger­many was placing colon­ialism in its pan-European context, and public­ising its sudden emergence as an imperial power.

German colonial efforts, des­pite being limited, did not create a happy time in world history. So it did not surprise historians that early in WWI, most of Germany’s African and Pacific colonies were occupied by other Euro­pean colonial powers. Only in German East Af­rica did the Generals and African mercenaries persevere until the end of the war.

Perhaps because of its tradition of expansion within Europe, Ger­m­any's renewed attempt to conquer Europe in WWI resulted in loss of its overseas possessions. Post-WW1 Germany was strip­ped of all its colonies under the 1919 Treaty of Versailles. The confis­cated terr­itories were dist­ributed to the victors, under the new system of mandates set up by the League of Nations.

Thus the German colonial empire ended. Yet colonial consciousness did not disappear. Nazi Germany’s attempt to acquire new Eur­o­p­ean “colon­ies” before and during WW2 started with the annexation of Aus­tria and Czechoslovakia. Then Germany wanted parts of Poland, Ukraine, Russia and Baltic states. Undoubtedly there was a legitimate  concern for the millions of ethnic Germans who lived there, but that would have led to the unif­ic­ation of Greater Germany, not colonisation of unrelated European nations. 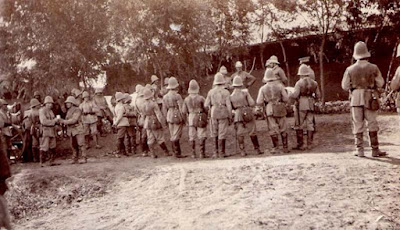 A German colonial army
in khaki uniforms and helmets

For the first time Berlin's Deutsches Historisches Museum has focused on German colonialism in an exhib­it­ion called  German Colonialism Fragments Past and Present (Oct 2016-May 2017).

Displays dealt with German colonialism via paint­ings, graphics, everyday objects, posters, documents, photo­graphs, colonial wares, toys and travel rep­orts from Germans and locals. One example. European civil servants and military trav­el­lers from all the colonial powers wore tropical helmets made of pith or cork. Used extensively across all the tropical col­on­ies, the helmets offered pro­t­ection against sun and rain for Imp­er­ial German Officials. The helmet became a fixture of the colon­ial dress code and a sign of membership of the racially-defined rulers.

The exhibition published by an excellent booklet in German and English. From this catalogue, I was most interested in the under­lying id­eol­ogy of colonialism, worldwide political riv­alry with other col­onial powers, and the pursuit of economic power in the 19th and early C20th. The discussion of German dom­in­ation, with its viol­ence, crush­ing of rebellions and genocide, was harsher. Nonetheless the exhibition did inform current debates about the recognition of gen­oc­­ides.

While I am biased perhaps and many wrongs were committed around the world by the English in their colonies, I think they were better colonial masters than the alternatives. I didn't realise quite how many colonies Germany possessed. Perhaps my lack of awareness is because the colonies were lost so early in the 20th century.

When Europeans left their home countries in the 19th century, they often chose to go to settled parts of their distant empires. The British went to India or Australia for example. But when Germans wanted to emigrate after 1871, they moved east into Eastern Europe or west to the USA.

Hello Hels, Germany's European "activities" have drawn so much attention that we rarely think about their colonial expansion, but it comes as no surprise that they were no better and perhaps sometimes worse than other European powers.
--Jim

it is very difficult to know with accuracy how European colonial masters treated the countries they took control of. After all, it was the victors who set up the censorship laws, wrote the history chronicles and gaoled/executed rebellious locals.

eg India. The British took over India to dominate the trade routes, ports, natural resources, military security, cheap labour and a guaranteed market for their finished products. And the Indians did indeed gain railways, postal system, irrigation and primary schooling etc. But Indian religions were hated by the colonisers, their villages were destroyed and their raw materials were shipped to the UK, even during famines. And I haven't even mentioned the total loss of Indians' political, social and economic controls over their own country.

Re the lack of awareness of the German colonial empire, I am with you. Even knowing a great deal about Victorian and Edwardian history does not necessarily prepare a thinking adult to know about remote 1884-1918 islands and countries.

my understanding of German emigration was that it started LONG before German colonisation started in Namibia and other places in 1884. German settlers were called into devastated areas of Hungary, Turkey, Yugoslavia and other areas throughout the 18th century, for security against the Ottomans and to repopulate ruined areas. Even Kazakhstan was filled up with Volga Germans.

Ditto the USA. Perhaps a million Germans settled in the USA in the 19th and early 20th centuries (as well as Brits and Scandinavians). I am guessing that the Germans liked the religious freedoms of the USA and found plenty of work with the booming American railroads etc.

Mozambique, Rwanda and Nauru could not compete.

agreed. Even if we just consider Germany's activities in the later 19th century, Germany's unification in 1871 was not a simple event. The separate states had different political structures and goals, so if they were to ever unite, they had to secure German interests IN Europe.

I am _not_ surprised that the demand for prestigious colonies went together with dreams of a powerful German navy. But I _am_ surprised that Bismarck didn't enforce his argument that the costs of obtaining and defending foreign colonies would exhaust the new German nation. Bismarck was normally a man who demanded respect for his views.

The display of over 500 diverse objects and artifacts includes photographs, paintings, sound archives, maps, as well as period curiosities such as a 19th century board game designed to promote colonialism. Each object is accompanied by detailed information and, in many cases, curatorial remarks on related issues, such as broader historical context or discourse analysis.

Many thanks. Although it is too late for me to see the exhibition at Deutsches Historisches Museum in Berlin, I hope the displays, curators' notes and catalogue will be going on to other museums and galleries. I am particularly interested in "Colonial worldviews and colonial rule" and "German colonialism" within the world view.

Hi Hels - it is an interesting time period with unintended consequences occurring today. I know relatively little about the time - but the colonisers weren't kind - but then perhaps who were at that stage. There were some enlightened people, as there are today. The exhibition must have been interesting ... I'd have loved to have seen it ... and the history is always informative ... thanks for this - Hilary

history students usually learn a great deal about Germany's unification in 1871, the late Victorian and Edwardian eras, the antecedents of WW1 and the Russian Revolution. Yet not too many people know the first thing about Germany's Colonial Empire, including me.

I wonder if some histories are analysed over and over again (eg Napoleon), and other eras are ignored.