Who should own the Koh i Noor Diamond - Britain, India, Pakistan, Iran or Afghanistan?

Britain and India are not the only nations making claim to the amaz­ing Koh-i-Noor diamond. Half the nations in Central Asia have been, or will be in court over this treasure.

Clearly the diamond variously belonged to all the Indian and Persian rul­ers who fought bitter battles throughout history. In 1526 the Mog­­ul ruler Babur mentioned the diamond, gifted to him by the Sultan Ib­rahim Lodi of Delhi, in his writings. At 793 carats, it must have looked superb.

Shah Jahan (1592–1666) was the ruler who commissioned the Taj Mahal mausoleum. But he also commissioned the very glamorous Peacock Throne, the Mughal throne of India in Delhi. The Koh-I-Noor was mounted on this very special piece of furniture. When he was imprisoned by his son Aurangazeb, Shah Jahan could only ever see his beloved Taj Mahal via the reflection in the diamond.

Aurangzeb might have been cruel to his own father, but at least he protected the diamond by having it cut down by a Venetian specialist to 186 carats, then brought the Koh-I-Noor to the Badshahi Mosque in Lahore. Aurangzeb passed the jewel on to his heirs but Mahamad, Aurangzeb’s grandson, was not a great ruler like his grandfather. Sultan Mahamad lost a decisive battle to Nader. 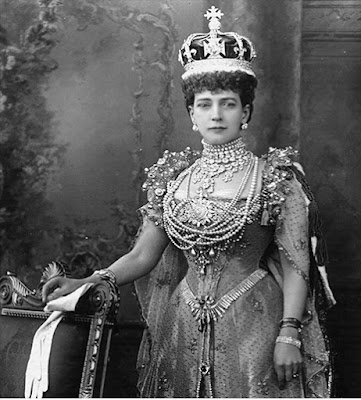 Queen Alexandra's corontation 1902,
with the Koh-i-Noor in the centre of her crown

Emperor Nader Shah, Shah of Persia (1736–47) and the founder of the Afsharid dynasty of Persia, invaded the Mughal Empire, event­ually attacking Delhi in March 1739. So Nader Shah took the diamond back to Persia and gave it its current name, Koh-i-noor/Mountain of Light. But Nader Shah did not live for long, because in 1747 he was assass­in­ated and the diamond went to his general, Ahmad Shah Durrani.

The defeated ruler of Afghanistan Shah Shuja Durrani brought the Koh-i-noor back to the Punjab in India in 1813 and gave it to Ranjit Singh, founder of the Sikh Empire. Durrani made a deal: he would surrender the diamond to the Sikhs in exchange for help in winning back his Afghan throne.

Most of the Punjab region (including Delhi and Lahore) was annexed by Britain’s East India Company in 1849, and then moved to British cont­rol. The last Maharajah of the Sikhs, the 10 year old child Duleep Singh, wept when land and treasures of the Sikh Empire were confiscated by governor-general of India, Lord Dalhousie, and taken as war compen­sat­ion.  The diamond, the most tragic theft of all, was formally transferred to the treasury of the Brit­ish East India Co in Lahore! Even the Treaty of Lahore specifically discussed the fate of the Koh-i-Noor, in writing.

The diamond was proudly shipped by Lord Dalhousie to Queen Victoria in July 1850. It was a symbol of Victorian Britain's imperial domination of the world and its ability to take the most desirable objects from across the Empire... to display in British triumph.

And then it was exhibited at the Great Exhibition of 1851 in Crys­tal Palace, in the south­ern central gallery. World Fairs were of­ten used to display a country’s greatest treasures. So, as expected, there was enormous excite­ment in Crystal Palace when official com­mentators and the general public first saw the jewel. Although there were 100,000 other exhibits displayed in Crystal Palace, the queues to see Queen Victoria’s diamond were the longest of all.

In 1852 the Queen decided to reshape the diamond and it was taken to a Dutch jeweller to re-cut it. The Koh-i-Noor had originally been one of the world’s largest uncut diamonds, but by 1852 the size had been reduced again, this time down to 106 carats. Queen Victoria wore the diamond occasionally afterwards. She wrote in her will that the Koh-i-noor should only be worn by queens.

After Queen Victoria died, the Koh-i-Noor diamond was crafted into the Crown Jew­els and displayed at the Tower of London. 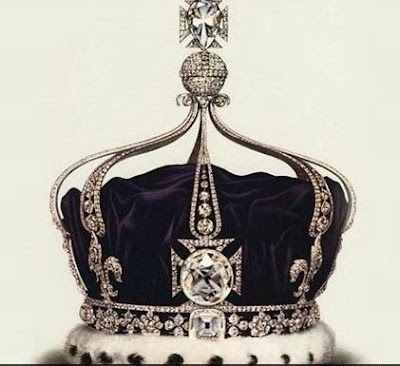 The Koh i Noor diamond, set in the Maltese Cross at the front of the crown
106 carats during Victoria's reign.

In 1947, the partition of India led to the Punjab being divided into the newly created Union of India and Dominion of Pakistan. This partition has influenced the cases brought in Brit­ish courts over the last few years. Recently the descendants of the last Maharaja of the Sikh Empire said they were forced to hand over the Koh-i-Noor diamond to the British; they launched a court action in the UK to get the diamond back in Sept 2012. The case depended on the diamond being one of the many artefacts taken from India under ugly circumstances. The Indian lawyers claimed the British colon­isation of India had stolen wealth and destroyed the country’s psyche. Their court case failed.

But India was not the only nation with a historical claim to the diamond – it had passed through Persian, Hindu, Mughal, Turkic, Afghan and Sikh owners centuries before it was seized by the British in the C19th. So expect the British to face another legal battle, after a Pakistani judge accepted a petition de­manding that the Queen hand the $200 million stone back to them. Mind you, in 2013 the Prime Minister David Cameron said that returning the stone was out of the question. Will the next prime minister say the same to Persia/Iran?

Historians last question is "what is the proper response to imperial looting?" Read the brand new book Koh-i-Noor: The History of the World's Most Infamous Diamond by William Dalrymple and Anita Anand, published by Bloomsbury in 2017. The history of the Koh-i-Noor, that was accepted by the Brit­ish, is no longer a glorious piece of the nation’s colonial past. That history is finally challenged! The resulting version, now pub­lished, is one of greed, murder, wars, torture, colonialism and approp­riation.

Fascinating history, great post! History does have a tendency to be bloody, though, and not always fair - though that is a relative concept. Question: when do you start applying modern western moral standards to events that happened in the past? The events described happened in different times. Get a grip and move on. If you applied the principle of returning items to their rightful 'owners', you would empty half the museums in the world and spend a lot of time tracking down who 'owns' what. And what would you do about Tasmania? Or the USA? Do we give those back too? There are better ways of spending tax-payers money than paying lawyers to debate spurious issues like this. Or maybe, taken to its logical conclusion, the right thing to do with the Koh i Noor is to put it back in the ground.

Possession is nine tenths of the law, so given its many claimants, it should perhaps remain in UK. As Mike@Bit About Britain says, there are many things which for historical reasons seem to be anomalous, as he cited. Another one of these is Gibraltar, a subject raised by the visiting King of Spain during his address to the joint session of British parliamentarians, conveniently omitting to mention Spain's control of Ceuta and Melilla in the Mediterranean.

The Spratly Islands (and others) in the South China Sea claimed variously by China, Taiwan, Malaysia, Vietnam and the Philippines remains an unresolved territorial dispute that dribbles on in varying degrees of intensity.

As it would be so difficult to establish any rightful ownership, it may as well stay where it is, where it is presumably safe.

The division of the Punjab into the Union of India and Dominion of Pakistan must have greatly influenced the cases brought in Brit­ish courts. What a nightmare.

Hello Hels, I am generally against repatriation of art objects, except in cases of clear theft or transgressions of laws, and even then the passage of time can affect things. Of course, the legal climate might be different now, but prosecuting a doubtful case like the return of the Koh-i-Noor mostly results in a build-up of resentful feeling in the people who are trying to get it back.

As the other commenters have noted, almost every piece of real or personal property has a checkered history, with different standards applying at different times, and no way to reconcile all claims. I recall one of the plot points in Nathaniel Hawthorne's House of the Seven Gables was a family claim involving a deed to the entire territory of Maine--a fat chance of that being returned to a single owner circa 1850!
--Jim

For example Benin desperately wants to reclaim its royal throne, crown, septre etc back from the old colonial rulers, France. The French colonial rulers from the 19th century have no feelings about African cultural icons, but do not want to lose treasures that had been distributed amongst France's galleries.

Yes modern Western moral standards have changed ... but the colonised countries are still paying the cultural price for having been under European etc control 100+ years ago.

Good lord! You'll be asking us to return the Elgin Marbles next!
CLICK HERE for Bazza’s concinnituous Blog ‘To Discover Ice’

as difficult as it is to have _cultural items_ repatriated to their own country, I agree that it is infinitely more difficult to have _land_ returned to the proper owners. Since many lands were owned and governed at different times by a range of rulers from the outside, how far back into history should the locals go to establish rightful ownership? Bohemia, for example, was Slav, Czech, German, Habsburg, Austrian, Hungarian, Czecho-Slovak, Russian and Czech again. Have I forgotten anyone?

Unresolved territorial disputes that go on and on forever, from presenting resolutions in the UN to war-and-annexation are the stuff of nightmares.

the biggest diamond I saw in a close photo was Mariah Carey's, a 35-carat stunner. I thought it was so big, she would have to wear her arm in a permanent sling. So how did Queen Alexandra and the other queens feel when wearing the Koh-i-Noor in the centre front of their crowns? A bit ostentatious?

Greece should take Britain to an international court to retrieve the Elgin Marbles. Securing control of the sculptures will only be successful if the Greeks go through the International Court of Justice.

Armed struggles along the India–Pakistan border continue :( Punjab in particular has been a disputed region for ever, so nobody expected that the Partition of India in 1947 was going to resolve all territorial issues. But did anyone realise that Indian-Pakistani divisions would so greatly prejudice the cases brought in _Brit­ish_ courts. If the Koh-e-Noor rightly belonged to Punjab province, who is going to claim it today?

looting and stealing cultural objects from countries at war, and carrying them off with the victorious soldiers, has been going on forever. But war plunder is easier to repatriate because, as you say, the courts recognise the clear element of theft quite easily.

The nations running their colonies, on the other hand, were not at war with the nations who were being colonised. So today the courts would have much more trouble deciding what was theft and what was merely the Cost of Doing Business.

A fascinating article. I didn't relaise that the diamond had quite so much history behind it.

With all that history it would be difficult to decide who actually should have custody of it.

I believe that is true for all stolen cultural objects. The reconstructed Babylonian Ishtar Gate in the Pergamon Museum of Berlin is one of that museum's masterpieces. But the good people of Iraq are heartbroken because the Great Gate of Ishtar once stood at the entrance to Babylon.