My first connection with Gretna Green (pop 2,700) came, not via his­t­orical texts, but in Jane Austen’s novels. It is a village in S.W Scotland in Dumfries and Galloway, 1.5ks across the border from Eng­land.

By the mid C18th the country was facing serious social problems caused by large numbers of irregular marriages taking place. Rumours emerged about underage heiresses who had been tricked, or kidnapped and forced into marriage by unscrupulous men. So to prevent families seeing their underage offspring preyed upon, English law lords app­roved new laws to tightened marriage arrangements. In particular, note Lord Hard­wicke’s Mar­riage Act for the Prevention of Cland­estine Marriages (1754). Couples had to reach the age of 21 before they could marry without their parents' consent and their marriage had to take place in a church. The new law was rigorously enforced, and clergymen faced 14 years of transportation for breaking it. 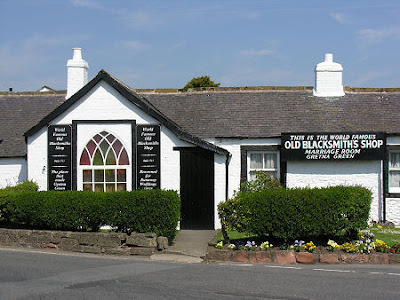 Scottish law however was different, as was Irish law. In Scotland marriage was permitted for girls from 12, and for boys from 14. And anyone in Scotland could marry couples on the spot in a simple Marriage by Declaration ceremony, requiring only two witnesses and assurances from the couple that they were both over the age of 16 and free to marry.

With such a relaxed arrangement within reach of England, it soon led to the inevitable influx of thousands of young couples running away to marry as quickly as they could. For travellers from the south, Gretna Green was the first Scottish village they entered, follow­ing the old coaching route from London to Edinburgh.

In coaching days, there was sometimes a frantic carriage chase through England to the border, presumably to evade angry fathers of vulnerable brides. In those days a black-smith’s shop was an obvious stop, the place very where run-away weddings began. The blacksmith was the heart of any village, always at work making horseshoes, fixing carriages and farm equipment in his work­shop. Honest men of toil! Being right at the heart of the heart of the village, the now famous Famous Black­smith's Shop is at the junction of the old coaching roads. 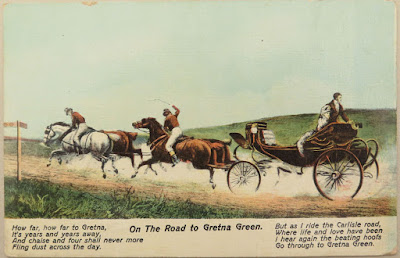 Couple in a carriage, racing to the border ahead of her angry father

How strange that a blacksmith’s shop would also become synonymous with a hot bed of scandal and intrigue, with daughters from respect­able families eloping to marry a scoundrel. The so-called Anvil Priests would perform the ceremony for a wee dram or a few guineas, depending on the couple’s status and financial standing. The hammering of the anvil soon became a key sound; grooms romantically said that like the metals he forged, the black­smith would join couples together in the heat of the moment but bind them for eternity.

A few years later in England, Lord Brougham's Act provided the cooling-off act that stipulated a three-week residency in Scotland prior to the marriage. For the marriage to be legal, this Act applied to at least one of the marrying couple. But it seems that the new English amendment made little difference to affianced couples.

Today, pass through the narrow walls and low ceiling of the Famous Blacksmith's Shop to feel the dramatic atmosphere of this old building. The blacksmith, and his legendary anvil, become synonymous with c5,000 Gretna Green weddings each year. It was never a secret! One blacksmith wrote to the Times in 1843, stat­ing that he had single handedly performed c3,500 marriages in the town over 25 years.

Although 15 days' notice is required to marry in Scotland, there is no residency requirement. Thus English couples can still get married there at relatively short notice. 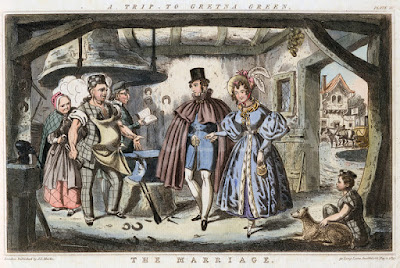 Despite the legal distinctions that once made Gretna a marriage capital, it still holds a romantic appeal. "Running away to Gretna Green" is a phrase still used today. Since couples still make the trip, an entire industry has built up around Gretna Green’s history: hotels, wedding planning companies, car hire firms, photographers, gift shops and hair salons are everywhere in this small town.

The Mill Forge Hotel sees c600 weddings a year, of which 80% are English couples. The main customer base is from Manchester, Liverpool, Yorkshire and Birmingham. And they have also had wedding parties from South Africa, South America, USA and New Zealand.

Gretna Green has always traded on its difference from England, relying on cross-border trade. What might have changed, had Scotland achieved independence? The issue of Scotland’s independence probably did not arise for Gretna, a town built during WW1 to provide homes for 30,000 employees of a huge munitions factory.

I remember references to being married in Gretna Green in films and in books, but I never really knew why it was significant. Who should marry whom is not a modern troublesome matter.

when I wanted to get married in 1970, my father was delighted but didn't want to waste scarce money on a flash reception. He said "run away to the border, get married in front of two witnesses and have some photos taken". My mother almost fainted since I was their only daughter and she had been waiting for my wedding for ever.

In the end I had a huge wedding, and dad paid for it all. But what did he mean by "run away to the border"?

Hi Hels. I have a cousin whose father owned a restaurant in Ilford, Essex. At the age of sixteen he ran away to Gretna Green with the seventeen-year-old girl who washed dishes. She converted to Judaism and now, 57 years later, they are still happily married - unlike many of our large number of cousins! Thanks for this lovely story which, in the UK, looms large in our national heritage.
CLICK HERE for Bazza’s fabulous Blog ‘To Discover Ice’

Hello Hels, I too have read about Gretna Green marriages in British novels, but until your article I didn't know all the history and mechanics. In the U.S., sometimes people got married quickly in Mexico, but the U.S. small city that has a related reputation is Reno, Nevada, which is synonymous with quick divorce. The phrase "going to Reno" must be at least as common as "going to Gretna Green."
--Jim

The idea of the underage runaway bride was all very romantic to young couples, but the parents would have been furious. The church too.

the thing about running away to Gretna Green usually signified some sort of issue that the family found problematic - age differences, class differences, religious issues, untrustworthy grooms. Your cousin covered the first three problems, yet the marriage still turned out well :)

Nevada must have had extremely relaxed requirements for obtaining a marriage licence eg that state may not have required a three-day waiting period between the issuing the license and the ceremony. Or Nevada may not have been a required blood test and medical exam. Anyhow can we say that since the early 1930s, Reno was the place for fast, cheap and informal weddings?

Re divorce in Nevada, it was far clearer. The state was the only one that had the concept of a no-fault divorce decades ago.

when I was 18, I too thought that eloping with a Naughty Boy was a very romantic idea. But why did the parents or the local parish clergyman not have the Gretna Green marriage annulled, once the couple returned home?

We know Scotland tolerated irregular unions, since Scotland's marriage laws differed significantly from other European countries until the mid C20th. But countries almost always accepted couples as being legally married, as long as the wedding was legal in the country they were married in.

Hello again, I think that Indiana has had no-fault or some kind of similar divorce, even back in the 19th century. I seem to recall that even some English people obtained Indiana divorces, although in the 1800's it was not the easiest place to get to.
--Jim

Thanks Hels for another great informative read. I did not know why Gretna Green was known for runaway marriages but I do know about Reno Nevada - because in that great 1939 movie The Women the storyline includes going down to Reno for 6 weeks to establish residency then get a quickie divorce. Reno is full of 'dude ranches' and health retreats to cater for these girl-breaks. If you haven't seen The Women, you've missed the catfight in the dust between Rosalind Russell The Wife, and Paulette Goddard The Homewrecker, both dressed to the nines. it is wonderful. as was your post

Moment of Indiana History said that from c1850, Indiana used to have one of the most liberal divorce laws in the country, and unhappily married individuals flocked to the Hoosier state in order to bring their unions to a quick end. The divorce applicant had only to provide proof of residence and swear there was statutory cause for their petition.

However, the ease with which one could terminate a marriage in Indiana did not enhance the state’s reputation nationwide. So the state had to reform its divorce laws in the 1870s, and in 1889, Indiana’s “fame as a quick and easy divorce mill” was being eclipsed by other states’ lax laws for ending marriages.

Poor things. A Divorce Mill was not exactly a flattering description :(

I haven't seen The Women but I know exactly what you mean about dude ranches and emotional retreats after a divorce in Reno. In The Misfits (1961), Marilyn Munroe had been speedily divorced in Reno, then recovered with cowboys in the Western Nevada desert. They busied themselves with horses, rodeos, rabbits, house building, booze etc.

Reno seems to have inserted itself in popular American culture just as clearly as Gretna Green did in popular British culture.

I am well aware of the history but I have never actually visited the building. Even though I have passed near to it on several occasions!

I need to rectify that.

Please Keep Continue Such Kind Of Effort.I Shared Your Post With My Friends Also. celtic festival 2018
Join us Saturday night at the fire pit for a free, fun-filled (party) under the stars! Enjoy an adult beverage in the cool of the evening while you enjoy traditional Scottish entertainment from pipers, drummers, athletes, Highland and Irish dancers, singers, fiddlers, clans and more!

Thank you. I think we are so used to passively watching entertainment, few people know how to have more energetic fun these days.