The Battle of Beersheba was to be a three-phase operation, to be carried out in one day. For the detailed story of the Australian and New Zealand light horsemen in Beersheba, see an earlier post.

The timing is perfect! In Oct 2017 Australians and New Zealander tourists will want to commemorate the 100th anniversary of the Light Horse Charge by participating in The Footsteps Of The ANZACS In The Holyland tour.

DAY 1 | MONDAY 23rd OCTOBER 2017
On arrival in Israel, the expert historian will take participants on a relaxed walking tour, telling stories of the ANZACs and the three battles which took place in Jaffa/Tel Aviv.  Overnight: Tel Aviv

DAY 3 | WEDNESDAY 25th OCTOBER 2017
Golan Heights
Tour Kibbutz Degania, the world’s first Kibbutz, and hear the story of the pioneers who built their new society in 1910. Visit the little known Turkish Pilots Memorial in the fields of Kibbutz Haon, the Railway Station at Semakh and the Light Horse Memorial on the Sea of Galilee. From the Golan Heights, see views of the Syrian Israeli border.  Overnight: Galilee Kibbutz

DAY 4 | THURSDAY 26th OCTOBER 2017
From Nazareth to the Jordan Valley
Visit the magnificent Basilica of the Annunciation in Nazareth. Stop at the German WWI Military Cemetery with its wooden crosses. Enjoy a biblical style lunch at Nazareth Village, and then explore the Crusader Castle of Belvoir to hear the stories of Saladin. Travel along the fertile Jordan Valley stopping at the Bridge built by General Allenby. Visit the site of the original Baptism on the Jordan River at Qaser El Yehud. Overnight: Jerusalem 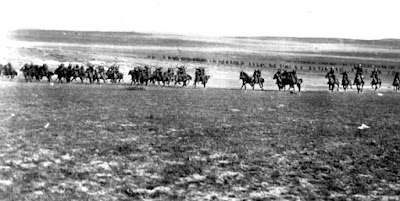 The ANZACs in Beersheba
Charge of the Light Horse, 1917 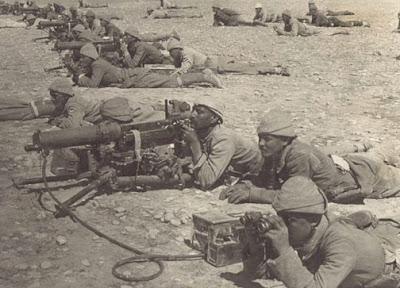 DAY 6 | SATURDAY 28th OCTOBER 2017
Ancient Jerusalem
Visit the Commonwealth Cemetery on French Hill, named for Allenby’s friend Gen. French who was killed in the Battle for Jerusal­em. Do a rooftops tour of the Old City. Walk along Via Dolorosa and visit the Church of Holy Sepulchre. Place a note in the Western Wall & visit Old Jerusalem’s Jewish Quarter. Stroll along the Arab Quarter's oriental markets, walk along the walls from Jaffa Gate to Mt Zion and visit Dormition Abbey and Room of the Last Supper.  Overnight: Jerusalem

DAY 7 | SUNDAY 29th OCTOBER 2017
Ein Gedi, Masada and the Dead Sea
Drive to the Dead Sea, the lowest place on earth. Enjoy the nature walk at Ein Gedi and the water falls. Visit the mountain fortress of Masada built by Herod the Great and the last stronghold of the Jewish rebellion against the Romans. Float in the salty waters of the Dead Sea, and layer on the curative mud. Overnight: Dead Sea

DAY 8 | MONDAY 30th OCTOBER 2017
The Path of the ANZACS
Follow the Nabatean Trail along the Spice Routes. Stop at Han Saharonim for a jeep tour of the magnificent geological formations. Follow the ANZACs leading up to the attack on Beersheba. Travel along Besor River and cross the Hanging Bridge to Besor Dam built by the ANZACS. Stop by the restored Turkish Patish Ruins and hear the story of Colonel Richard Meinertzhagen’s Haversack Ruse. Enjoy a camel ride in the desert. Overnight: Desert cabins in Beersheba

DAY 9 | TUESDAY 31st OCTOBER 2017
Battle of Beersheba Commemoration
In Beersheba, commemorate the centenary of the Australian/New Zealand soldiers in WWI. Attend a moving service hosted by the Australian Ambassador and notables at the Beersheba Commonwealth Cemet­ery. The cemetery contains 1,241 Commonwealth burials of the Great War; the many rows of graves are meticulously maintained by the Commonwealth War Graves Commission. 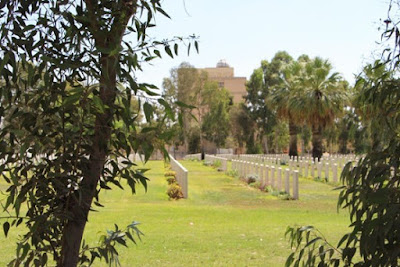 British Commonwealth Cemet­ery, Beersheba
near the ANZAC Museum work site.
Note the site is surrounded by Australian eucalyptus and other trees

Join in the opening ceremony of the new ANZAC Museum in Beersheba. This new museum will be dedic­ated to the history of the Battle of Beersheba, built by the Beersheba Municipality and the Australian Gov­ernment, Australian Embassy in Israel and Pratt Foundation. The museum will be inaugurated 31st October 2017.

Visit Tel Sheva for an overview of the main battlefield sites and ceremony hosted by the New Zealand Embassy. Exper­ience a re-enactment of the Charge by the Australian Light Horse Association and the WWI Heritage Society. A large contingent in full WW1 battle attire will re-enact the ride in 2017. See the magnificent Park of the Australian Soldier, established by the Pratt Foundation in 2008, which includes special facilities for children with disabilities. Lastly enjoy a festive farewell dinner at a Middle Eastern Restaurant in Jaffa or Abu Ghosh.  Overnight: Tel Aviv

In a completely separate tour, but perfectly timed to follow on from Beersheba, visitors might like to fly to Paris for In The Footsteps of Monash Tour, 2nd – 12th November 2017. General Sir John Monash was considered one of the best Allied generals of WWI and the most famous commander in Australian history. Later in the war, he commanded all Australian troops on the Western Front.

Follow General Sir John Monash and tour the key Australian battlefields of France and Belgium. Explore the Australian battlefields around Ypres, places where the ANZACs made history in 1917. The Passchendaele Museum is very moving, featuring a recreated British trench. As is Tyne Cot, the world’s largest British Commonwealth war cemetery. 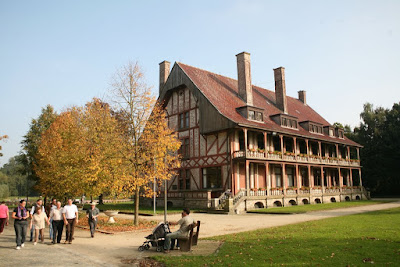 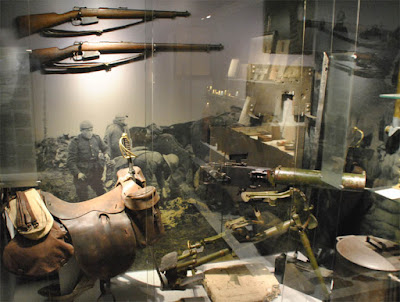 The tour will end with a Remembrance Day Commemoration at Villers-Bretonneux, 99 years after the end of WW1. Starting and ending in Paris, enjoy the services of an expert WW1 historian to highlight many of the AIF diggers’ lives and bravery in the Great War.

Participants will receive a copy of Mat McLachlan’s definitive guide to the Western Front called Walking with the Anzacs and detailed maps of the battlefields and key sites visited on the tour. Many thanks to Naftali Tours in Israel for the printed brochures and itineraries.


Writer and editor Sam Lipski will give the final keynote speech at the Australian Association for Jewish Studies Conference. Called "Audacity and Watershed: The Australian Light Horse Charge at Beersheba, 31 October, 1917", his paper will be presented at Sydney’s Jewish Museum on the 12-13th February 2017.

Hello Hels, What an appropriate way to commemorate these historic campaigns and the soldiers who served in them. I don't know if many such WWI/WWII tours are organized. I do know that in the U.S. there are many people who go around touring Revolutionary, Civil War, and other battle sites, some of which are now located in national parks. My mother and sister were particularly moved when they toured the Gettysburg battlefield.
--Jim

Those Anzacs must have been very brave. Nobody in their right mind would go against machine guns, on open horses in a barren desert. Except young Australians and New Zealanders.

The Passchendaele Museum is actually heartbreaking.

the trouble with memorialising civil war sites is that they divided the nation when the slaughter was happening and the experience is still divisive now. This is true for the American, Russian, French, English and any other civil wars you care to remember. But I am very pleased your mother and sister toured the Gettysburg battlefield, and were moved by their experience.

The German Officers in command of the Turks in Beersheba recognised the advancing formation of Mounted Horsemen as Mounted Infantry and ordered the Turkish defenders to wait until they had dismounted, then to open fire. The ANZAC soldiers must have been insane to battle machine guns with nothing but swords and loud yells.

The Turkish artillery, who opened fire with shrapnel that exploded in front of the galloping horsemen, hit some. Then, after a brief zone of casualties, the lines galloped free. The Turkish soldiers were un­ner­ved by the mass of Light Horsemen thundering closer and they could not adjust their sights fast enough. Their bullets began to whistle harm­lessly over the heads of the charging troops. On reaching the tren­ches many horses were brought down and others were impaled on bayonets. They galloped straight for the enemy guns, capturing them intact, then rode on to Beersheba. What a catastrophe that most certainly would have been :(

agreed. The Memorial Museum 1917 is just the start of a heartbreaking visit to the battlefields of Passchendaele. My least favourite aspect is the route through the museum via a clever reconstruction of deep dugouts - very claustrophobic.

The museum is near Tyne Cot Military Cemetery, the largest British Commonwealth cemetery anywhere. And the Canadian Battlefield Memorial marks the site of Crest Farm, where Canadian soldiers suffered so badly. In fact the whole area, including the surrounding towns, were devastated before Armistice Day in 1918.

Thanks for all this, Hels. The two tours sound great; wish I could take them both.
But I did mark my calendar for Oct. 31 in Beer Sheva and Tel Sheva.
Are you coming for the big day?!

I think the 31st Oct will be amazing. The 100th anniversary of the Light Horse Charge will be the perfect day to hear the Australian Ambassador at the beautiful but rather tragic Beersheba Commonwealth Cemet­ery. And to join in the opening ceremony of the new ANZAC Museum in Beersheba with Australian ambassadorial staff all over the place. The Park of the Australian Soldier will impress.

I am glad you mentioned Tel Sheva. My son the tour organiser has travelled to New Zealand twice recently, and is finding a great deal of interest in being on the battlefield sites, led by the New Zealand Embassy. [I am in and out of hospital, and cannot drive or fly. But I will ask my son to write up a guest post on the 1st Nov]

The second tour is on more familiar ground for me and I have visited many of the sites.

me too - I have been to Beersheba twice and The Somme once. But our historical knowledge of WW1 history changes, and and so do our national values. The 2017 tours will be important, I hope, for the generation whose grandfathers or great grandfathers were WW1 soldiers.

This post is so useful and relevant. Surely it will help others a lot. Thanks for this post. Keep blogging. you can make plan withEducation consultants in chennai
Canada job consultancy in chennai
Holy land tour packages from Chennai

The 1917 anniversary in 2017 was important, but the tours will continue to go each year and are still increasing in complexity. In the blog post, I have recorded the contact for the Australian travel agent who organises British Commonwealth tourists in Beersheba.