The Aberfan Catastrophe in Wales, 1966

When I was writing about the Halifax Catastrophe of Dec 1917, several Welsh readers thought I was discussing the Aberfan catastrophe of 1966. In each case:
1. the deaths were not through an act of war or an act of God, but were due to human error.
2. the catastrophe occurred at 9.15 AM, just as the school children were getting settled into school. The loss of so many young children devastated the community.
3. the original event caused a domino destructive effect that could not be stopped.
4. the entire community rallied to help the survivors
5. the bereaved parents and families never really recovered.

Prior to the disaster, Aberfan was a small South Welsh coal min­ing village, founded shortly after the first excavations for the Merthyr Vale colliery in 1869. This close knit community of miners and their famil­ies was sufficiently large to require both a primary and a sec­ondary school. Pit jobs kept Aberfan thriving.

Dealing with the waste was always a problem in coal mining companies, which often generated large volumes of dirty material that could not be recycled. In South Wales, they piled the waste next to the mine workings. Ever since 1869, the hills right above the Aberfan village had been dominat­ed by enormous spoil heaps. Many complaints had been made to the National Coal Board about the dangers of one of the seven gigantic slag heaps that loomed high above the village, including a petition from Pantglas Junior School in 1963.

I recommend readers find "Death under the black mountain" by Steve Humphries in BBC History Magazine. One Friday morning in October 1966 it was raining very hard and the streets were covered in a dense, miserable fog. By 9.15 am, just the children had settled into school, spoil tip No 7 – one of seven slag heaps that loomed high above Aberfan – started to move. Then the entire edifice was transformed into a 30’ tsunami of sludge that slid downhill at 80+ mph. Seconds later, a wave consisting of half a million tonnes of liquefied coal waste crashed into Aberfan in a deafening roar. The wave swept across a canal and over an embankment, before sinking the primary school. 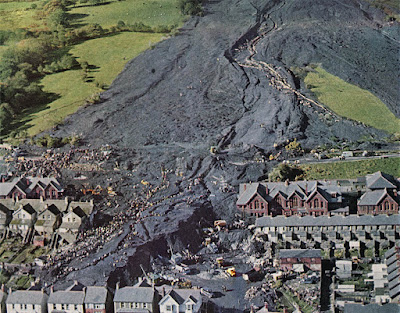 The dense black sludge descended down from the slag heaps on top of the mountain,
down on to the village below.

The walls of four of the school’s seven classrooms at Pantglas Junior School were destroyed and inundated by 1.4 million cubic feet of liquefied slurry. By the time the cloying black mass came to a halt a few seconds later, the victims were engulfed exactly where they stood or sat. An eerie silence envel­oped Aberfan as villagers tried to understand what happened. Then fireman and ordinary citizens rushed to the school and began frantically clawing at the re-solid­ifying slurry. The dense mass that was left behind was almost impossible to excavate.

Miraculously, some children survived. Five children in the school hall were saved by a dinner lady who dived on top of them to shield them from the slurry. She died.

There was a second grave danger: the avalanche was not caused by water from natural springs underneath the tip, but a torrent of water from fractured mains was spreading over the slurry. Even if the villagers had survived the avalanche by keeping their noses above the slurry line, they would have drowned in flood waters. [It is interesting that the Commission of Enquiry later noted that when coal waste tips were involved, water was undoubtedly the root cause of most failures. But the springs had been known about for many years – they were even shown on the Ordnance Survey maps of the area!]

Then the lead was taken by the local coal board’s Mines Rescue Service, established to rescue miners trapped underground. Coal miners from Mountain Ash, some of them fathers of the school children, were called from their shifts underground and took over from the firemen.

Within 2 hours, the resc­uers realised that all of the children they were finding in the school were dead. Many were still sitting at their desks, entombed by the slurry. Once the miners understood that no-one could be saved, it turned into a recovery operation. The slurry had been so fine that the children would have been suffocated straight away; did it comfort the parents to know that their children died instantly? The dead were taken to a makeshift mortuary set up in Bethania Chapel, where many parents had to identify the bodies of their children. 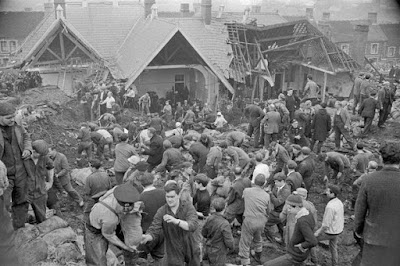 Searching for survivors and for bodies

By the end of the day, the landslide had utterly demolished Pantglas Junior School and 18 houses. Additionally it had seriously damaged the secondary school and many more houses. The final death toll reached 144, of which 116 victims were children – nearly half of the primary school’s pupils. And their teachers.

Nine months later, a tribunal published its report on the disaster. It found that the National Coal Board (NCB) was completely to blame for the disaster, despite the fact that, while giving evidence to the trib­unal, NCB chairman Lord Robens insisted the Coal Board was blameless. Lord Rob­ens and the NCB even denied that the Aberfan tip complex had ever slid bef­ore, despite clear, documented evidence of tip slides in 1944 and 1963. In the end, no person or organisation was prosecuted for caus­ing the deaths, and for the physical and social ruin of the Aberfan community.

Since the NCB was treated as if it were a government department, making them pay the direct costs of the disaster was considered to be unwise as it would increase the governmental deficit. Furthermore the report said that, according to laws relating to corporate negligence in 1966, no regulatory offence was committed during the Aberfan Disaster because no miners were killed. Unfortunately since the NCB and the Treasury refused to accept liability, they would not fund the removal of tips that still loomed above the village. Lord Robens claimed that it was too expensive (£3 million) to remove them. Fortunately since the 1966 catastrophe, coal spoil tips have been treated as engineering structures requiring proper design and maintenance. 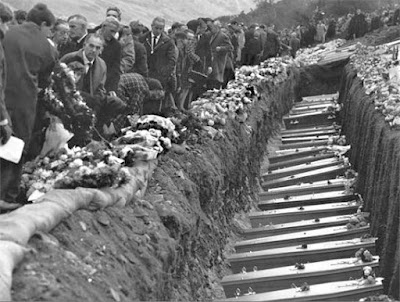 So many small coffins, buried together

Coming to terms with the loss of so many children and teachers has been very difficult for the people of Aberfan. And they haven’t been helped by the local or national governments.

Exactly 50 years after 21st October 1966, on 21st October 2016, Wales again fell silent as the country remembered the Aberfan disaster. A day of events to commemorate the disaster included a service at Aber­fan Cemetery. First Minister Carwyn Jones and Prince Charles planted trees in the Aberfan memorial garden... while the bells rang out from St Tydfil's Church. The Rev Irving Penberthy, Methodist minister covering the Aberfan area back in 1966, gave the memorial sermon in 2016.

I listened to a broadcast or watched one about the disaster on the anniversary and what struck me, aside from criminal incompetence or neglect, was how profoundly the event affected the locals mentally, like no other disaster I have knowledge of. Criminal incompetence by authorities still happens, as we saw two days ago in the Middle East where firemen fighting a building fire were killed when the building collapsed.

It is unthinkable that a small community would lose its children. How would any town survive such a loss?

Re incompetence and neglect by the authorities, the telling issue is: "In South Wales, they piled the waste next to the mine workings. Ever since 1869, the hills right above the Aberfan village had been dominat­ed by (increasingly) enormous spoil heaps".

There were indeed endless complaints that were made to the National Coal Board, decade after decade!! The dangers of the seven gigantic slag heaps that loomed high above the village can be clearly seen in the old photos.

Shame on the mining company, but even more so on the National Coal Board :(

my aunt said that during the Holocaust, she survived the loss of her parents, brothers and spouse. But when they came for her sons, she had nothing more to live for.

I know we cannot compare a mining accident to WW2, but the loss of the community's school children ends the parents' spirit for ever.

Hello Hels, Why should it take the deaths of schoolchildren to open people's eyes to threats that were glaringly obvious? The Collinwood School fire of 1908 was another disaster that was waiting to happen. The building was a death-trap that should have been inspected (or never approved), but it took the deaths of 172 students to revise the safety rules.

Even today, although some standards have been instituted, profit and convenience take precedence over safety. Witness the dangers involved in fracking, and I have read that the catastrophic damage in New Orleans after hurricane Katrina was due to improper maintenance of (and building over) engineered safety features.
--Jim

Did the miners leave Aberfan after the catastrophe? Where else could they have gone?

Yes!! ...the Collingwood School fire of 1908 was horribly comparable, even though there were no coal mine sludge heaps or ships crashing into each other. The design of the American school had no simple exits for the children to run out of in case of fire, the building was built of flammable materials and the fire brigade could not get into the building to save children. But what stood out for me most was that coroner did not hold anyone responsible for the 174 deaths.

My question here is did the American community cope better and learn more from the catastrophe than the Welsh community did?

The BBC said the NCB initially offered grieving families £50 before raising it to the more generous offer of £500. A more substantial sum, it was advised, would have destroyed the working class recipients not used to large amounts of money!!

An awful tragedy for the families and community. I wonder if those who refused to accept accountability for the disaster ever felt guilty.

*nod* there was something very vindictive in the coal company and the National Coal Board not taking responsibility. But they had financial motives to lie to the families. What was the Commission of Enquiry's motives for not supporting the community, either morally or financially?

The BBC reported "To reach an appropriate sum the Charity Commission proposed asking grief-stricken parents ‘exactly how close were you to your child?’; those found not to have been close to their children would not be compensated".
http://www.bbc.co.uk/news/resources/idt-150d11df-c541-44a9-9332-560a19828c47

I find it all unbelievable.