Dutchman Han van Meegeren (1889 –1947) was born in Deventer and developed an interest in painting at a young age. He wasn’t supported in his dream to become an artist by his father, who banned painting as a career. But it didn’t matter. van Meegeren met a school teacher-painter who encouraged the lad. The teacher loved art from the Dutch Golden Age and probably steered van Meegeren into C17th paintings as well.

Old Mr van Meegeren sent his son to school to become an architect in Delft, but the lad didn’t graduate and moved instead to art school in The Hague in 1913. Van Meegeren exhibited his first set of legitimate paintings in 1917, and they proved to be somewhat old fashioned with the critics. He did not have as much talent as the great artists who had lived in the Golden Age, apparently.

In 1937 the first famous art historian to be fooled by van Meegeren’s Vermeer was the Vermeer scholar Abraham Bredius. He examined a large painting of a Christ and the Disciples at Emmaus that was in France and wrote an article in the Burlington Magazine saying "It is a wonderful moment in the life of a lover of art when he finds himself suddenly confronted with a hitherto unknown painting by a great mas­t­er, untouched, on the orig­inal canvas, and without any rest­oration, just as it left the paint­er's studio. We have here the masterpiece of Johannes Vermeer of Delft".

The painting was larger than anything Vermeer had done, and it had religious subject matter, a genre Vermeer rarely touched. But art historians had speculated that Vermeer might have painted religious themes early in his career, and they were eager to believe that the painting really was Vermeer’s. And Vermeer was a good target because he’d produced so few paintings (c33). That meant art hist­orians were constantly seeking previously undiscovered Vermeers. 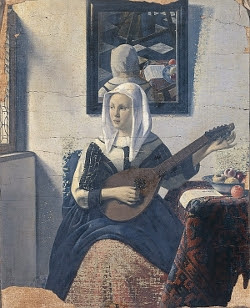 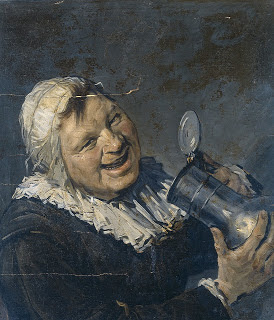 Many other fakes followed. van Meegeren studied Vermeer (plus Pieter de Hooch and Frans Hals), bought authentic C17th canvasses, and used the original recipes for making his own paints. His biggest problem was trying to make the painting look like it was 300 years old so he experimented with the original paint formulas and baked his paintings in an oven. To avoid burning, van Meegeren found using phenol formaldehyde on a finished painting would make the paint harden. When it was finished baking, he made cracks on the surface to give a sense of legitimate old age.

Then van Meegeren had another problem: the content of the paintings. At first, he painted pictures much like those that Vermeer had painted, but he found that experts looked too closely at them and detected little differences between the real thing and the forgery.

van Meegeren said he did the fakes to revenge himself on the art critics by doing perfect forgeries. Van Meegeren set out to show the world that he was just as good as the Golden Age artists by creating paintings and passing them off as the old artists’ originals. Presumably he also loved the huge amount of money made from the fakes and the luxurious life style this money bought for his family.

Starting with his famous Christ at Emmaus painting, van Meegeren continued to churn out paintings with religious subject matter, and they continued to be snapped up by art patrons. By the time he was found out, he’d made $30 million on his forgeries (c$400 million today).

During WW2, the Nazi leader Hermann Goerring traded dozens paintings for van Meegeren’s forgery of Christ with the Woman Taken in Adultery. Goerring was pedantic in his record keeping and at the end of WW2, van Meegeren was arrested for collaborating with the enemy and tried. In order to avoid execution, van Meegeren chose the lesser crime of forgery. He claimed responsibility for the painting of the Vermeer that Goerring had bought, along with five other Vermeer paintings and two Pieter de Hooghs.

The incredulous court room had him paint another forgery in front of them to prove it, and when he passed the test, his charges were reduced to forgery. Rather than be angry with van Meegeren, the Dutch public largely lauded him as a patriotric hero. He had, after all, secured many paintings that had been unlawfully seized by Goerring by duping the famous Nazi into thinking he’d purchased a real Vermeer. Even in 2015, when I reviewed his reputation in the Netherlands, people still secretly admired van Meegeren for being so scholarly in his fakes. More than once have I heard that Meegeren’s tour de force was a feat more of intellect than of skill. 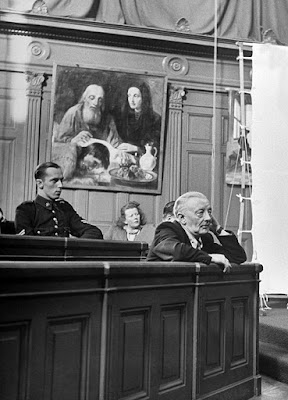 van Meegeren at his October 1947 trial in Amsterdam
He died two months after this photo was taken.

van Meegeren died of a heart attack soon after the trial ended. Until the end, he believed that post mortum his name would be forgotten, and his paintings would eventually be remembered as true Vermeers. This was not what he wanted AT ALL. Many forgers did prefer anonymity and were therefore rarely remembered. But Han van Meegeren was the exception. He wanted to be remembered as the most serious, most successful modern day art faker in the world.

And there was another accidental result. Art historians, patrons, museum directors and dealers agreed that from then on, all master painters needed to be evaluated in far more depth and with more scientific rigour.


A very sympathetic book was Van Meegeren's Vermeers - The Connoisseurs Eye And The Forger's Art by Lammertse, published in English by Boijmans Van Beuningen in 2011.

A less sympathetic book was by Jonathan Lopez, The Man Who Made Vermeers: Unvarnishing the Legend of Master Forger Han van Meegeren, published by Mariner Books in English in 2009. Lopez dated van Meegeren’s initiation into The Hague’s underworld of art swindlers to 1920 when he was mentored by a dealer and painter, Theo van Wijngaarden, who had apprenticed in trickery by a genius: Leo Nardus. Nardus stuck art patrons with old copies, fresh fakes, and misattributions of famous artists. Then a panel of invited experts, including Bernard Berenson, Roger Fry and PAB Widener, defrocked Nardus.

I need to be honest about why I  did not include photos of van Meegeren's religious paintings in this post: The Supper at Emmaus (1936), The Last Supper I (1939) and Jesus Among the Doctors (1945) - I did not like them.

I wondered why you hadn't included the photos of the paintings in your post. I don't like them either. It's hard for me to believe someone would think they were authentic. The only word I can think of that describes the way I feel when I view Meegeren's Christ is creepy. I read the 2nd of the two books you reviewed and it was very uncomplimentary to Meegeren. I didn't come away from it feeling like Meegeren was a hero. I'm sure others might disagree. . .

We have examined other fakers before in lectures, especially Elmyr de Hory and Wolfgang Beltracchi. Was Han van Meegeren any different from all the others?

Hello Hels, It seems that art critics and collectors are their own worst enemies when it comes to fakes. The desire for making a coup throws all reasoning and proportion out the window. The old saying sums it up best: If it seems too good to be true, it probably is.
--Jim

it is such a strange story agreed.

I think that since van Meegeren was arrested for collaborating with the enemy at the end of the war, he faced execution and national disgrace. The reason the population got behind him was that they read his tricking Goerring as nationalist heroism. Had he been tried in the 1930s, my guess is that he would have been seen as just a nasty little crook trying to make money from innocent Dutch victims.

No, I think the art forgers were all doing the same thing - using their artistic talents to fool the collectors and the galleries, and to make money for themselves. For example, had de Hory painted his "van Dongen", "Vlaminck" and "Matisse paintings" but signed them with his own name, we would not be having this discussion. That he was talented and loved Fauvism was beyond debate; that he was flogging his fakes across Europe, Japan and the USA was distressing.

the great Vermeer scholar Abraham Bredius understood perfectly well that if it seems too good to be true, it probably is! He was an established and learned expert, so why was he so easily fooled by van Meegeren’s painting of "Christ and the Disciples at Emmaus"? The size was wrong, the subject matter was not Vermeerish and the colours were not attractive!

We have to assume that Bredius was soooo keen to make his OWN mark in art history, that he was 50% responsible for the mis-attribution to Vermeer.

Welcome aboard. I don't like advertising but I am always impressed with people who think about the complex issues involved in stolen or faked Old Masters.

you will enjoy this.

The art world can prove a bear pit, with a myriad of tricksters at work. Experts estimate that anything between 20%-40% of works of art on the market are faked. And they can turn up in the most unexpected places. Hanging in one of the most prestigious and respected art institutes in London is a picture Philip has heard of, which may hold the key to unlocking the story of the most audacious forger of all time. A man who dared to fake the work of Old Masters and made millions from his deception, until he was caught in 1945: Han Van Meegeren.

But a mystery remains to this day, as Van Meegeren died before a complete record of his fakes was made. How did he pull off faking Old Master paintings, duping important art galleries in to making purchases of works apparently by Vermeer, even foxing Goering in to buying one of his works during the war? Philip and Fiona get to work on the London picture which, legend has it, hung in Van Meegeren's studio on the day he was arrested. Was it his last work? And by testing it, can we prove how he out-foxed some of the most eminent minds in the art world?

clever programme! Since Philip and Fiona wisely noted, Van Meegeren died before a complete record of his Old Master paintings was made. So how many more fakes are out there, secretly treasured by private collectors and even galleries?