How would the booming city of London house the turn-of-the-century New Woman? Comfortable ladies' residential chambers such as Sloane Gardens House (built in 1888) and York Street Chambers (built in 1892) were beyond the pocket of many working women. A few committed organis­at­ions such as the Homes for Working Girls and the Girls' Friendly Society provided less expensive options, but these tended to be unattractive.

In 1910, there were c60 lodging houses for lower-middle and middle class working women in London. By 1925 there were c170. Many of these were in converted buildings but some were in purpose-built and architect-designed facilities.

Hampstead Garden Suburb became a model of housing developments that went back to the late C19th. By then urban planner Ebenezer Howard 1850–1928 had formulated his vision for a comm­unity that would be free from industrial ugliness, located in fresh countryside, yet enjoying the benefits of urban living. This utopian ideal had already been realised in Letchworth Garden City, shaped by the planner and architect Raymond Unwin.

Meanwhile, working in the slums of London's East End, Canon Samuel Barnett and his wife Henrietta had similar ideas. They imagined a Utopian community based on the neighbourliness of an English village. In 1896 the Northern Line of the London Underground was about to be built, with a station at Golders Green. The Barnetts foresaw that the Underground would bring bricks and mortar in its wake, ruining what was then still farmland north of Hampst­ead Heath. Henrietta set about preserving a northward extension of the Heath as a "garden suburb for all classes". If north Hampstead had to be devel­op­ed, she would see it was developed properly. 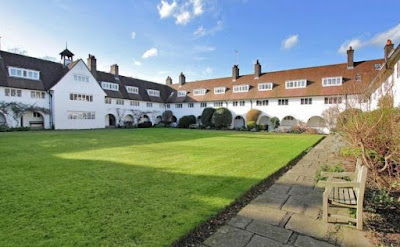 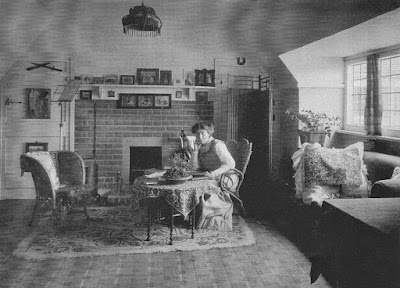 Waterlow Court, a resident in her lounge room 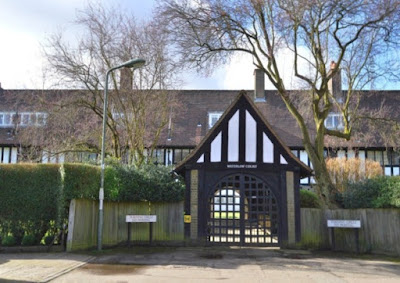 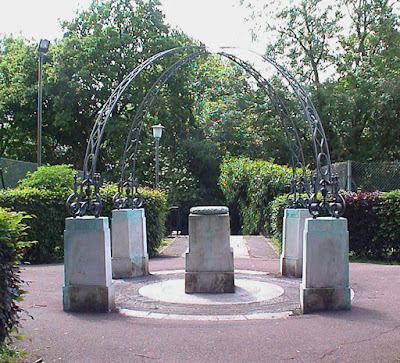 Henrietta Barnett had two priorities. She wanted to save 80 acres of land from the "rows of ugly villas that dis­fig­ure most of the suburbs of London". She required that a] the cottages and houses should be limited on an average to 8 per acre; b] roads should be 40’ wide; c] fronts of the houses should be at least 50’ apart, gardens occupying the space between; d] plot divisions should not be walls but hedges or trellises; e] every road should be lined with trees and f] it was to be surrounded by fields.

Secondly Waterlow Court in Hampstead Garden Suburb was to provide a co-operative housing enclave for single, working women. This new court was established by a housing company and designed by famous English architect M. H. Baillie-Scott (1865-1945) in 1904. In this brave new world of independent, working women, Baillie-Scott combined Queen Anne architecture with the Arts and Crafts Movement as a statement of high ideals.

In May 1907, the first sod was turned on the estate. Mrs Barnett's appearance on the podium was warmly welcomed, her speech underlining the Christian context of her mission. Within a couple of years, the court’s grounds of cloistered flats opened (in 1909) as a project of the Improved Industrial Dwellings Co whose chairman was Lord Sydney Waterlow.

For women who weren't able to afford servants, the shared facilities allowed them to share the cost of living and to enjoy companionship. The original communal dining area was in the gabled block to the rear of the courtyard. The windows were mullioned, leaded casements. The original fittings, door and window furn­iture were made by J Pyghtle White of Bedford for Ambrose Heal of London. Many thanks to Historic England for the architectural details.

Waterlow's lych-gate (roofed gateway) opened to a timber-framed and covered walkway which in turn led to the courtyard. The low tiled roofs featured timber cupola and high brick chimney stacks. Note the round-arched arcades which created a cloister effect around the central courtyard; they served as a walkway to ground-floor flats and gave access to the C18th style stair cases. The cloisters allowed covered access from all the flats to the dining and other communal rooms.


At the time it was opened, Waterlow Court comprised 50 individual flats of 3-5 rooms, with a communal dining room and small common room, house keeper's and servants' accomm­odation and a kitchen where communal meals were prepared. Porter's accommodation was either side of the main entrance.

Edwin Lutyens already had a strong association with Hampstead by the time Mrs Barnett needed a consultant in early 1909. He focused on the Central Town Square, designed in the shape of two churches (one Church of England and one church for all the other denomin­ations). This was where the suburb’s key public facilities were built.

Around the buildings were five landscaped areas with lawns, beds, a wild garden with 35 fruit trees and an inter-war pre-cast shelter. From the entrance gate a covered way led to the housing, either side of which were lawns with shrub borders and elegant trees. The central courtyard had a square lawn surrounded by paved paths along which were benches backed by flower borders to the cloisters. Surrounding the housing were more lawns, originally including one or two croquet lawns here.

As elsewhere in Hampstead Garden Suburb, hedges with arches were an important feature and most of those at Waterlow Court have been rest­ored in recent years. The garden area at the back was probably used for growing food, particularly during WW2. The large number of fruit trees symbolised Dame Henrietta Barnet's ambition for every house in Hampstead Garden Suburb to have its own fruit tree. Many thanks to London Gardens Online for their detailed garden information.

The original communal rooms were later converted to flats and the complex now has 54 flats in all. The layout remains similar today to Baillie Scott's original plan; and it is likely that the planting scheme is still inspired by Gertrude Jekyll. In fact today Hampstead Garden Suburb remains a beautiful suburb.

For those who would like to examine other listed working women's lodging houses from the 1900-1925 era, I recommend the article called Buildings That Celebrate Working Women.

When my granny worked (in a shop), she had only two choices. She could live with her parents or she could marry some man and move into his home. No flats, no hostels, no communal housing.

Brilliant and inspired work by Dame Barnett and it is good to see it is still there and has been adapted for modern times.

Hello Hels, Most utopian communities and projects for lower-income workers are doomed to such spectacular failure that it is not only refreshing to see an exception to the rule, it is well worth studying to find out what circumstances in the design operated differently in order to create such a pleasing outcome. Perhaps at the heart of it is respect for both the workers and for the site, which seems to be the case for Waterlow Court.
--Jim

The resident looked very confident and comfortable in her lounge room.

The hostels for single working women in Britain were not created until the very end of the 19th century, and blossomed until the outbreak of WW1. Your grandmother and mine were born in the wrong country and the wrong decade, but I still bet that their parents would not have let them live in independent communal housing facilities.

the time was right! The Garden Suburb was already becoming a model for housing developments by the 1890s and into the new century, especially amongst progressive, Utopian and environmentally aware town planners.

The genius of Dame Henrietta Barnett was in providing equally progressive housing, but in this project she also recognised and catered for the needs of single, working women.

I have read many analyses of the Garden Suburb Movement, starting with Ebenezer Howard's 1898 book "To-Morrow: A Peaceful Path to Real Reform". It was revised in 1902 as "Garden Cities of To-morrow".

In my opinion, the Utopian or Christian communities that cropped up all over the world seemed to value the clean, simple, rural life based on obedience to the group's or head man's moral leadership. They mainly failed.

The resident in her Waterlow Court lounge room did indeed look comfortable and pleased with herself. She had enough private space to: play music, read, display her paintings and entertain a few guests in comfort.

If she wanted to eat in the communal dining area, she walked to the gabled block in the rear of the courtyard. The New Woman was living a much more modern life than her mother had.

Very interesting! I didn't realise that there were so many "new women" by the turn of the century (I thought things didn't really change until the onset of the first world war). Were there rules about who was allowed to live there eg what happened when the new woman acquired a gentleman friend and got married? The idea of the garden city / suburb is interesting especially when one looks at the state of housing in London today - a huge shortage of affordable housing, massive overcrowding, little sense of community or neighbourliness; most new provision is by haphazard, unplanned private sector development, mainly benefiting wealthy investors (often foreign).

In Britain, the change towards women's independence was progressive, starting with the temperance movement and divorce rights in the late 19th century, to sportiness and light clothing before WW1, to the vote after WW1.

But elegant housing for independent, single, working women was amazing. I would not have expected that project to be launched as early as 1904.