The mutual admiration between ballet and fashion

In setting the historical context for the Ballet and Fashion Exhibition at the National Gallery of Victoria in 2012, Roger Leong wrote that art and fashion have long been associated with each other. Ballet and fashion have inspired each other ever since performers have been dressing up and dancing. We can look back to King Louis XIV, in whose court ballet was formalised and codified, and who himself performed in opulent robes meant to evoke the Sun God.

Dancers have long influenced designers and designers have dressed dancers, exciting audiences of both the stage and the runway. But over the past two decades, collaborations between art and fashion have burgeoned at every level. Artists can be inspired by working together - even those separated by centuries are able to draw on each other’s talents to spark innovation.


Ballet itself is a multi disc­iplinary form, invol­ving cooperation with musicians, designers and film­ mak­ers. So the eye of the fashion designer has to find a new way to interpret a silhouette, inspiring a choreographer to devise movements that accentuate it and a photographer to capture it. 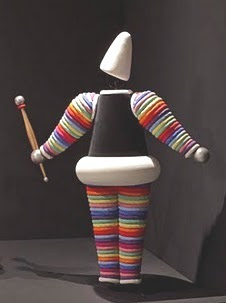 Consider Scenario, performed in 1997. Much like the American dancer and choreographer  Merce Cunningham’s entire oeuvre, Scenario leads into un­charted formations and art­iculations of body shapes, this time high­lighted by Rei Kawakubo’s costumes. The alteration of proportions, and of one’s relation to one’s body and to the body of the other dancers, create a sense of estrangement. There is an element of ab­surdist humour in Scenario. This is especially evident in the first movement of the piece where the dancers are wearing the costumes with over­sized gingham and striped patterns, which are not altog­eth­er unlike the heavily patterned costumes characteristic of the Commedia dell’Arte—of Harlequin.

Actually I would rather compare Scenario to artist Oskar Schlemmer’s Triadic Ballet, a new form of abstract dance that must have stopped German viewers in their tracks back in 1922. Like Merce Cunningham decades later, Schlemmer also fused order and chaos, by combining elements of painting with those of theatre. Being a true Bauhaus master, Schlem­mer’s was the art of Gesamtkünstwerk: the Art of Total Theatre. So no-one else could have choreographed the dance and no-one else could have designed the costumes.

Exactly as Roger Leong described, Schlemmer often tested the laws of motion with costumes that responded to dancers’ individual move­ments. I think choreography-focused photography must have been as significant a part of Triadic Ballet as was the costume design. In any case, the costumes were shown at design exhibitions (for example at the Societe des Arts Decoratif in Paris in 1930), rather than on the fashion runways. 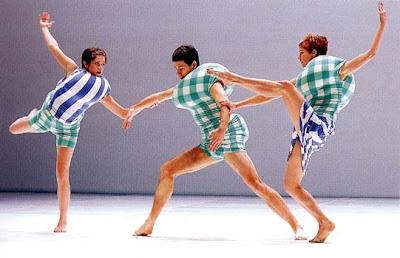 When I was dancing 120 or so years ago, we wore black leotards during practice and white tutus when performing. Nothing more interesting than that.

Thanks for bringing Oskar Schlemmer to my attention just love his rainbow legs man. My first thought re ballet+fashion [because I'm a Sixties girl] was Celia Birtwell and her love of Leon Bakst. I wonder if NGV's Tony Elllwood has heard of either of them.

Tutu Etoile noted that ballet costumes reformed many times, especially under the liberal Russian choreographer Michel Fokine. Ballerina skirts changed gradually, to become knee-length tutus designed to show off the point work and multiple turns. The dancer Isadora Duncan freed ballerinas from corsets. The Russian impresario/producer Serge Diaghilev became more creative, and professional costumers like Alexandre Benois and Léon Bakst demonstrated that the influence of Orientalism had spread from fashion to the stage. In the 1920s, costume designers updated classical Russian story ballets with exotic tunics, veils, harem pants and turbans, rather than in delicate tutus.

Leon Bakst (1866–1924) was a Russian painter who eventually specialised in costume and set design. His richly coloured designs suited Les Ballets Russes and Sergei Diaghilev.
In the pre-WW1 era, he created exotic, romantic Orientalist visions that were unforgettable.

Oskar Schlemmer (1888-1943) was a German sculptor, designer and choreographer who I recognise best as a master at the Bauhaus school. A generation younger than Bakst, Schlemmer's designs were more geometric and abstract. Fun for Bauhaus students putting on their own concerts, but would the bird cage costumes have allowed the same freedom of movement for those athletic young students?

In celebration of the 70th anniversary of the House of Dior, and the NGV's exhibition "The House of Dior, Seventy Years of Haute Couture", this publication explores the design legacy imparted by Dior and its reinterpretation under the six creative directors who have led the house since his death.