More athletic stars are yet to shine at the Rio Games

I have two very close connections with the upcoming Paralympic Games starting this week in Rio.  Firstly my father was the filtration engineer for all water sports at the 1956 Melbourne Olympic Games. There was never an Olympic swimming, diving or water polo event that my family hasn't felt involved in, ever since Melbourne's greatest international event.

Secondly I did my Pre-University Gap Year Programme in Israel in 1966. Amongst hundreds of Spanish and Portuguese speaking students, the 3 New Zealanders in the programme became very close friends to us Australians. Two of these New Zealanders married, moved to Israel and had a talented, famous daughter called Inbal Pezaro.

In Rio, Pezaro will swim the relay as well as the 50- and 100-meter freestyle, 100-meter breaststroke and 200-meter medley events. In the 2015 World Swimming Championship in Scotland, Pezaro won two silver medals and a bronze, securing her place as one of Israel’s 30 athletes on the Rio roster. She won three World Swimming Championship gold medals (2002, 2006, 2010) and silver medals (2006 and 2010); and one gold, two silver and three bronze medals from European Championships in 2014 and 2016. 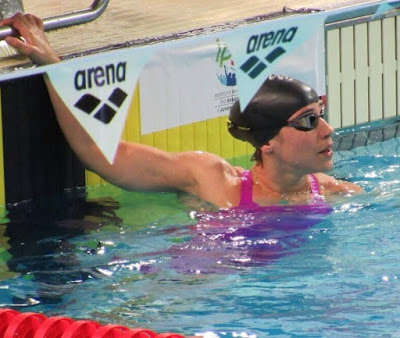 
“My mother keeps all of them for me. It’s not like you get up once a week and want to look at your medals. They’re a symbol; a piece of metal. They’re not the most worthy thing I have in my life. But they do mean a lot for the country I represent and how high the flag is raised up.” All of Israel is indeed proud of Pezaro’s athletic accomplishments. In 2002 she was chosen to light one of the torches at the national Independence Day ceremony, and in 2007 she was named Sportswoman of the Year by the Israeli Association for Disabled Sports.

Inbal speaks perfect English as her parents, Judy and Peter, are both from New Zealand and raised all the children on the Anglo-Saxon Kibbutz Yizra’el. In 2006, I went to visit the kibbutz for the 40th anniversary of our 1966 Gap Year Programme, and caught up with Judy, Peter, Judy's mum who had emigrated from New Zealand and the very athletic young Inbal! What a reunion.

With paralysis in her legs from birth, Pezaro was five when she began swimming in the pool at the Haifa sports center run by ILAN-Israeli Association for Children with Disabilities. She started competing at 11. Pezaro also enjoys skiing, but being in the water “shows me that I can never know what I can really do, that I can always be better. I already take it a bit for granted, but for me, not being able to walk, no other sport would give me the kind of freedom swimming gives me to stand and have full mobility,” says Pezaro, who has trained under Yakov Beinenson for the last 16 years. Though she was exempt from army service, she chose to be a swimming instructor in a naval commando unit.

Her preparation for Rio has been hampered somewhat by an illness in July. “I’m supposed to do about 10 or 11 water training sessions per week, and the rest in the gym,” she said in early August, “but I haven’t been well for the last month so I am only now starting to get back on track. Most importantly, she adds, “I think it’s all about the way I prepare myself mentally.”

Rio may be the last Paralympics in which Pezaro will compete, as she wants to begin academic studies after returning from the Rio Games. Fortunately, the school year for higher education in Israel begins only after the high holidays in October.

Yet in keeping with her overall outlook, she’s concentrating more on doing her personal best than on bringing home another medal. “The most important thing for me is to feel that I finished the race and gave everything I could, that I gave my best performance. I focus on that, not on the place or the time. I can only give my best,” Pezaro says.

Many thanks to Abigail Klein Leichman and Israel21c.

Hello Hels, You are lucky to have double personal links to make the Rio games more interesting and meaningful.(Although, according to your recent post, there were no 1956 Melbourne Games; this does detract somewhat from your father's accomplishment.)

Good luck to Inbal Pezaro--she is an inspiration to all of us.
--Jim

Do you remember the Russian/Hungarian waterpolo match back in 1965? A bloodbath

Hels. It must be interesting to know a competitor in the Paralympics. Good luck and all power to Inbal. I am pleased to hear your father was not responsible for the leaking pool but he must have been busy monitoring the water filtration after a certain water polo match.

Good Luck to Pezaro; she seems to be a wonderful character. I attended several Paralympic events in London 2012 and it became about sport rather than disability which was just as it should have been.
CLICK HERE for Bazza’s fabulous Blog ‘To Discover Ice’

That was such perfect timing, drawing a link between the 1956 and 2016 Games :) As a really valuable reward back in 1956, my father was given family tickets to every single swimming, diving and water polo event. Every child at the local primary school wanted to be our closest friend!

I had never heard of Paralympics back in 1956 but I do remember later athletes in wheelchairs participating in sports like basketball. Inspiration is the correct word.

I remember the Russian-Hungarian waterpolo match very well indeed! Right in the middle of the 1956 Hungarian Revolution, it was a hideous idea to pit two warring nations in a sport that was mainly under-water.

The knives on the athletes ankles filled the pool with litres of blood. The unconscious athletes were pulled out to recover on the tiles... and new athletes were thrown into the melee.

I cannot tell you how exciting it is to watch the first meeting that leads to going out together in a large group, exclusive dating, meeting the parents, getting engaged, marrying and having babies. Inbal was as talented as a teenager could be, but I like to claim some small amount of credit :)

Quite right.. it should always have been about the sport, not the disability! But watching talented athletes like Inbal makes me even MORE humble about my own limited sporting abilities.

A very enjoyable post to read with my cuppa this morning Hels.

Historians usually think of history as something that King Louis XIV did, or perhaps Florence Nightingale. But this story was special because it referred to our own adolescence (those mighty 1960s) and our own adventures. Who knew back in 1966 that we would one day have mature children and perhaps loving grandchildren?

Inbal won the bronze medal in the 200m individual medley.