As the last of the Vienna terminus railway stations, Nordwest­bahnhof was built by architect Wilhelm Bäumler in the years between 1870-1873. The building was placed in a great location, on the corner of Nord­westbahnstraße and Tabor Road, right near the lovely public parks that the Viennese so loved. 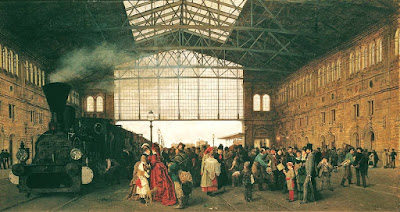 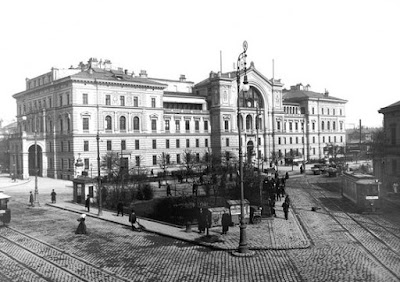 But not just for trains. The grand hall in the centre of the station has been used for many purposes over the years - entertainments, exhibitions, political gatherings and popular demonstrations leading up to WW1. After WW1 Karl Seitz (1869-1950) had been president of the Austrian Constituent National Assembly and a member of the Austrian National Council. Then he became the very popular Social Dem­ocratic mayor of Vienna from 1923-34. Remember Seitz’s name.

It all changed in the Roaring Twenties. With the end of the old Austrian-Hungarian empire, fewer trains were using Nordwest­bahnhof Railway Station by 1924. Once the station was totally abandoned in 1926, an ex-Norwegian ski jumper was very keen to introduce a snow palace in Vienna. In those days most citizens would not have known what an indoor ski slope was, but they quickly learned. By the time (Nov 1927) the snow palace was built, the mayor Karl Seitz was delighted to formally launch this amazing new facility. The Illus­trated Sports Journal could not have been more excited: "Kitzbühel in NordWestBahn Snow" was the head­line. Who needed to wait till winter, to exercise and get healthy?

The skiers went down a long wooden ramp, getting up enough speed on the downward descent to make long jumps (20 meters) possible. But going up was tougher. There was no climbing aid to go up! The art­if­icial snow was artificially produced by Englishman Laurence Clarke Ayscough and his secret Schneemixtur was imported into Austria. This material was so soft, the clients often thought the snow was real. 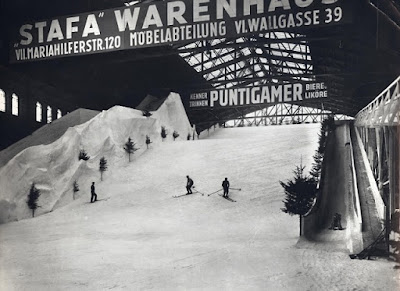 I would have said that this brand new winter wonderland thrilled the healthier citizens of Vienna – real mountain trees, a toboggan run and an even steeper ski slope. Vigorous exercise, throughout the year, was now possible for fit and sexy young adults to wear their gorgeous ski wear. And to look cool – at night the entire space was lit by attractive lamps.

Yet the Good Times did not rock on. In the July Revolt of 1927, protesters were gathering at Vienna University and at Parliament House, both on the Ringstrasse. Vienna’s chief of police, Johann Schob­er, urged the mayor Karl Seitz to call in the Austrian Armed Forces, which Seitz reject­ed. The Christian Social Party de­fence minister, Carl Vaugoin, also rejected military intervention. So Schober armed the police with army weapons and ammunition, and publicly announced that the premises would be cleared by force if the crowd did not leave. The police were command­ed to open fire on the civilians, killing 100 protesters and five policemen. Many hundreds of other by-standers and other policemen were injured.

The world's first indoor snow palace was shut down and bolted closed.

Indoor skiing has come a long way since the Vienna Schneepalast opened in 1927. Throughout the next decade, indoor skiing facilities opened up in Paris, Boston, New York, Berlin and London; in time 50 indoor snow centres were operating in 20 countries around the world. It is very possible that the film industry, which developed at about the same time as the indoor snow palaces, also helped spread the white snowy sport into city residents’ thinking.

Before WW2 started, the former Nordwestbahnhof/former ski palace became the scene of Nazi art exhibitions. In early 1938 an anti-Semitic exhibition called The Eternal Jew was displayed in the large central hall. Goebbels and Hitler gave speeches to celebrate the grand event. The location of the exhibition was perfectly placed, given that many Viennese Jews lived in Leopoldstadt and Brigittenau. And following the Anschluss, Nordwestbahnhof was the venue for the that city’s Degenerate Art Exhibition.

During the war, the German Wehrmacht used the old railway station as a ware house, a facility that was promptly bombed by the Allies. The once proud Nordwestbahnhof was permanently demolished in 1952.

Hello Hels, That was an interesting adaptive reuse of an old building, but I wonder how a ski-slope could have paid for the upkeep of the building as well as the ski apparatus itself. My guess is that if it had kept up for a few more years, there would have been a decline in the maintenance of the station, but the financing of these kinds of things is always mysterious.
--Jim

The biggest and fanciest snow palace now is Ski Dubai. Dubai has to be a VERY hot city to put a snow palace in.

You keep coming up with the most interesting stories. I found the Ringstrasse a little disappointing, mainly because of the overwhelming traffic, including tour buses and of course we were in one, so we were part of the problem. I wonder if I would have liked Vienna in the winter as much as I liked it in the summer.

the cost of opening the Snow Palace and maintaining it in great condition didn't occur to me; I always assume that all big national facilities are paid for by the government. There would have been two main goals:
1. to improve the health of local citizens via vigorous physical activity and
2. to double the number of tourists travelling to Vienna each year.

But I cannot find any statement about who met the costs.

Thanks to Vienna's Schneepalast, Ski Dubai is now the world's largest snow park. Even with temperatures soaring outside, inside it's always -1°C. Note the twin bobsled track, a snowball-fight gallery, 5 mountain slopes of varying difficulty, sled and toboggan runs, an icy body slide, giant snowballs and an ice cave.

I loved the Ringstrasse, but there were/are only three ways to travel. On foot or in horse drawn carriages, as the turn of the century aristocracy did, or by tram. It was to be elegant and leisurely, and the evening was to be finished up by sache torte in a gorgeous Vienna coffeeshop.

Hi Hels. I am reminded that I learnt to ski on an outside artificial slope in Harlow, Essex.
I would have loved the Viennese slope! I have always had difficulty understanding why a million people went to see the Degenerate Art Expo in Munich in 1937. Apparently, one of the reasons was for the state to 'acquire' some valuable art! Chagall and Klee were among the artists on show.
CLICK HERE for Bazza’s fabulous Blog ‘To Discover Ice’

the idea of having winter sports all-year-round was a brilliant one. Especially if the facility was indoors so that the weather had zero impact on healthy activity in summer! I include ski slopes, long distance jumps, toboggan races, snow fights, ice skating, ice hockey and anything else a city could think of. Once people had seen Vienna's Ski Palace, the rush was on to provide facilities in Britain, USA, Scandinavian sites, Japan, France and every other place.

The greatest excitement ever must have been when St Moritz Ice Skating Rink was built in Melbourne in 1939. 2000 celebrities, who had never seen snow or ice in real life, turned up on opening night to be interviewed on radio.

Re the Degenerate Art Exhibition in Munich (and then in 13 other cities), we often discuss it in class and in this blog. Search "degenerate" in the top left hand corner of the blog and join in the discussion. I need some new input :)