Frida Kahlo: do we love her for her art? or for her feminist/socialist politics?

Frida Kahlo (1907–1954) grew up in the family’s home where she was born, the Blue House. Her father Wilhelm was a German citizen who had immigrated to Mexico where he met and married her mother Matilde. It was not an easy childhood. After starting primary school, Frida she contracted polio which put her into bed for a long time. She surv­ived but at a great physical and emotional cost.

In 1922, she regis­t­ered as a student at the National Preparatory High School, and seemed quite popular there. Imagine the horror (in 1925) when she had a terrible vehicular accident and this time she was even more seriously injured. For life! I would have been suicidal by that time, but Frida pushed on. She began painting as a type of therapy and finished her first self-portrait the following year.

The Mexican Revolution was a major armed struggle during 1910–20 that radically transformed Mexican culture and government. As with all thinking and educated Mex­icans, Frida could not wait to join the Mexican Communist Party. The politics were excellent, and the social life was amazing.

Frida would have been my soul mate and mentor, had she stayed single... or married someone sympathetic. Alas she got one look at the artist Diego Rivera who was working at in the school’s assembly hall, and fell in love. 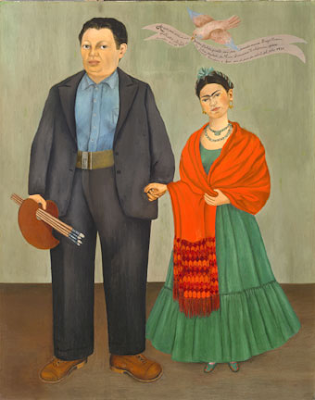 Frida was young (21), unknown as an artist, interestingly dressed and physically handicapped. Rivera was not young (42), totally famous, and looked like a dishevelled slob. When Rivera proposed marriage, Frida’s mother said “no, under any condition” and her father said “I won’t stop you, but it is a silly idea”. But what daughter listens to her parents, when she is in love? Or lust. Perhaps she married Rivera because he was a fine artist. But she also thought she was so ugly and crippled, she had to grab any happiness while it was on offer.


In 1932, a few years after her marriage, she became pregnant but suffered a miscarriage, due to her earlier injuries. She painted herself lying in a hospital bed at the Henry Ford Hospital in the USA. I have also seen paintings of her in a rigid brace, tightly strapping her body around the damaged spine. Christopher Allen said it was this sort of work in which Kahlo, at her best, transcended the personal and turned her own suffering into a universal metaphor.  I think not. This was so introspective, it was actually shutting out the rest of the world. 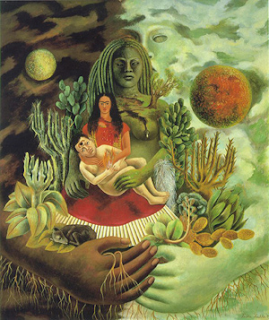 Frida Kahlo,
The Love-Embrace of the Universe, 1949, 28" x 24".
Modern and Contemporary Mexican Art Collection of Jacques and Natasha Gelman.

The best images were of the spouses when they were presented almost as equals eg Frida and Diego Rivera, 1931. My least favourite images were when Frida, who couldn’t have babies as the result of her accident, held Diego to her body as though he was her child and not her husband eg The Love-Embrace of the Universe, 1949.

The most exciting period occurred when Kahlo and Rivera became very close to Leon Trotsky; he had escaped to Mexico for political asylum, to get away from the increasingly insane and violent Joseph Stalin. In 1937 Trotsky lived at Frida's home where the two comrades had an intellectual and sexual affair. Trotsky and his wife then relocated to another house but tragically he was located by Stalin’s goons and assassinated.

Just before WW2 started, Kahlo became close to one of the primary figures in the Surrealist Movement, Andre Breton. He helped her in 1938 by creating a major exhibition at a New York City gallery where she sold many of her paintings. American magazine editors saw her paintings for the first time, so Kahlo started to receive commissions.

Then in 1939, Kahlo went to live in Paris. What an extraordinary time it was. Breton introduced her to Marcel Duchamp and Pablo Picasso, and they in turn helped her exhibited some of her paintings in Europe. 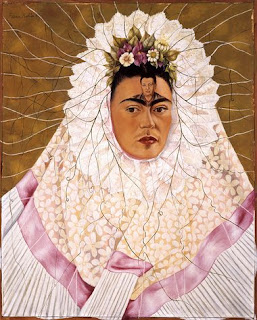 Kahlo’s all-consuming passion for the philandering Diego was more tragedy than happiness. The couple divorced in November 1939, but remarried in Dec 1940. We can see her perspective in Diego on My Mind painted in mid 1940, but perhaps he too was mesmerised.

There were many hospital and wheelchair paintings, presumably because that is where Frida spent such a long time. The operations didn’t help her, but the paintings certainly help us understand the unknown­able. In 1954, at only 47, Frida Kahlo died. She left c150 paintings and other works of art.

The Art Gallery of New South Wales is delighted to present Frida Kahlo and Diego Rivera: from the Jacques and Natasha Gelman Collection in Mexico, an exhibition that explores the art and the relationship of a famous art-based marriage. The show brings together 33 works by the artists as well as three short films; personal letters and 57 photographs documenting Kahlo and Rivera’s lives, examining their artistic output, public personas and impact on popular culture. This is the first time ever their work has been exhibited in Sydney, on show until 9th October 2016.

I haven’t flown up to Sydney yet, so I will cite Christopher Allen’s review. Putting together an exhibition on a significant figure in the history of art is a difficult task: it is not always possible to borrow the best works, or those that most aptly tell the important story. Unfortunately this show consists of a small number of works by each of the two artists, filled with walls of photographs and timelines. The supplementary material is interesting, but it ends up being an exhibition about Kahlo and her life rather than one in which we can form a full idea of her range, albeit limited, as an artist.

Rivera is best known for large-scale murals, but this aspect of his work cannot be shown at the Sydney exhibition. A world-famous figure in his time, here he largely plays the role of Frida’s consort. Nor does his work, essent­ially public and impersonal, sit particularly well with Frida’s, which is intimate and self-referential. About this I say “too bad, Diego! You broke her heart, ran around with other women, divorced Frida and looked after only your career!”

Hi Hels. I can think of no artist with a larger percentage of his or her work as self-portraits. Hence, her visage is very familiar to us. She was ruthlessly honest in those pictures always showing 'el mostacho'! She reminds me of the photographer, Cindy Sherman in that she appears (to me at least) to be role-playing in many of her pictures.
I believe her injury was on a public bus and she was lucky to survive it. A tragic figure really.
CLICK HERE for Bazza’s fabulous Blog ‘To Discover Ice’

Frida has always been an enigma to me. Thanks for sharing her history including her bout with polio and the traffic accident. It puts her art in a better perspective for me. She had a difficult life but amazing life and her art is able to tell her story as well as a diary would.

So do you prefer her art? or her personal and party politics?

agreed re the focus on self-portraits! And harsh to look at because many of those very self portraits focused on pain and loss. Just in case we didn't understand a painting like The Broken Column, Kahlo added nails into her face and body. I could not have tolerated that pain for a day :(

I know that when Kahlo put on her first solo exhibition in New York, she was treated like a famous Hollywood star. But what did the adoring crowds make of her suffering, clearly visible in her art? Pity?

spot on! Some people tell their life story via music, others in poetry or novels and some through the visual arts. I cannot help but think of talented young women, women who suffered terribly at home, school and work, then created lasting memories for us before they died. Kahlo was not that different from Janis Joplin or Amy Winehouse.

Clearly she was a very strong woman, one who persisted and surmounted obstacles that would have stopped other women in their tracks. Thus I think her personal politics made her a vital role model for other young women, more perhaps than her art.

She is someone I should have known more about and I do now, thanks.

I did Art History as a significant part of my first degree and remember that Proper Art was what came out of Italy, France and Britain. Like you, I would never have heard of a modern Mexican woman artist back then. Mind you in the middle 60s I had conscription, Vietnam and abortion rights on my mind, more than paintings.

many thanks. Do you have an intellectual or emotional closeness with Frido Kahlo?

I did my Gap Year in a South American Programme where 10 people spoke English, 10 spoke Portuguese and 100 spoke Spanish. I did a reasonable job of understanding simple Spanish, but the Portuguese accent left me struggling :)