Exhibition of Arthur Streeton landscapes at the Geelong Gallery

Undoubtedly one of Australia’s most important painters from the Heidelberg era, Arthur Streeton (1867-1943) was born near Geelong. From 1886 to 1888, Streeton was apprenticed as a lithographer in town, and in summer 1886 he painted with Frederick McCubbin and Tom Roberts in the more distant beach suburb of Mentone. In 1887 he camped and painted with Louis Abrahams, Tom Roberts and Frederick McCubbin at the weekends on an outer suburban/rural property in Heidelberg, and revisited this site in 1888. Thus the name The Heidelberg School of Art.


Timing for the Heidelberg landscape artists was perfect. With growing nation­alism and a push towards Federation, Australia was rapidly moving away from its colonial history. Artists and writers were searching for elements that were uniquely Australian – colours, landscapes, characters and weather. Their reputation in Australia was flourish­ing. Golden Summer, Eaglemont 1889 was painted during a hot summer of leisure. Despite the drought, Street consciously created a poetic and epic work about the Victorian landscape. He painted the foreground broadly, leading the eye up to the gum trees silhouetted against the sky, conveying oneness with nature and a feeling of wellbeing. 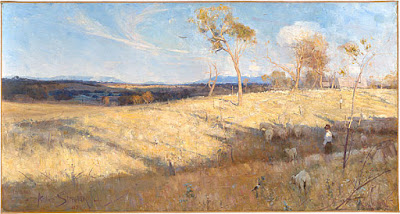 Streeton’s name was known overseas as well. In 1891, the painting Golden Summer, Eaglemont was exhibited at the Royal Academy of Arts in London, and was well received by the public there.

Federation was not formally proclaimed in Australia until 1/1/1901, but the seductive lure of London and Paris was already calling artists “home” to Europe’s cultural capitals. In 1897 Streeton sailed for London. He held an exhibition at the Royal Academy in 1900 and became a member of the Chelsea Arts Club in 1903.

Could Australian artists make a major impact on London and Paris at the turn of the century? Having an impressive reputation in Australia clearly did not guarantee Streeton an adoring public or a substantial income in Britain. This could have been a problem since he had to support his Canadian-born London-based wife, so we have to assume that his life style in Europe was well financed by the sales of his art back in Australia.

There was a huge excitement in living in London and Paris, but there was also a cost. Australian artists in Europe were out of contact with the land that had inspired them for 20 years and the cities that had nurtured them. As beautiful as the Normandy coast might have been, for example, it was not the Grampians and it was not Sydney Harbour.

Australian artists Rupert Bunny and Emanuel Philip Fox did not mind because their art was more international in any case, and less archetypally Australian. And artists George Lambert and Hugh Ramsay created beautiful portraits while they lived in Europe, not landscapes.

So Streeton returned to Australia in 1906 and re-engaged with the Australian landscape. He did some paintings at Macedon, before going back to London in late 1907. He visited Australia for a second time in April 1914 and was the star of exhibitions in Sydney and Melbourne. Yet once again Streeton and his wife returned to the UK in early 1915.

The exhibition brings together 30 paintings from public and private collections including the state art galleries of New South Wales, Victoria and Canberra, and from Geelong Gallery’s own collection. It has been curated by the Gallery, working with Streeton-expert Geoffrey Smith. 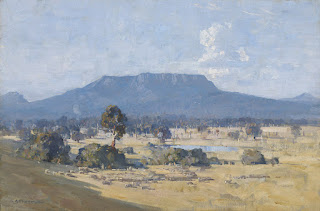 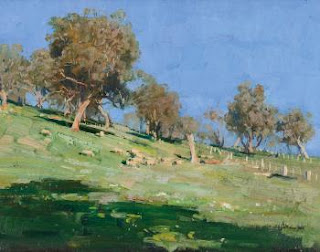 The City of Geelong sees itself as gateway to the Western District, making this particular exhibition a very suitable project for the Geelong Gallery. The Streeton Exhibition depicts locations in Victoria’s Western District and in those coastal areas frequented by the artist — Lorne, Port Campbell, Dunkeld, Halls Gap and the Gramp­ians. In fact the display has been arranged according to the various Western District sites that Streeton so loved, later in his life.

When Streeton returned permanently to Australia after World War One, I had to ask if his style was the same as it had been up till 1897. After all he had been only 21 when he left Australia and was a mature 53 by the time he returned home permanently. And Australia too had greatly changed since the heady days before Federation. The War to End All Wars had devastated the young male population, leaving widows, orphans and a damaged economy.

After returning permanently to Australia in 1920 Streeton continued painting grand Australian vistas. Land of the Golden Fleece 1926 displayed an open and opulent pastoral Australia: full of potential, grand in scale and scenic in beauty. In this work Streeton presented a country rich in earth, sky and sometimes water. Even post–war Australia was still a land of youth and possibility. Streeton had been a war artist and understood the tragic loss of life, yet he still looked to the Australian land as a symbol of national pride and prosperity – a reaffirmation of place and identity.

Only now his mountains were more mountainous than in 1897, the sunlight was lower, the shadows were more shadowy and the fun-filled idyll of Golden Summer had disappeared. Even the canvases were smaller.

Streeton retired to the rural outer suburb of Olinda in 1938 and painted no more. The exhibition will end on 13th June 2016.

Such a great blog that is. thanks for sharing.

I like the influence of the Impressionists in his use of light (I went to look at some of his other work on Google Images). Thank you for bringing this artist to our attention; although some of his paintings look familiar I did not know his name.
Also, although I have been to the beautiful city of Melbourne, I wasn't aware of quite where Geelong but was I know now!
CLICK HERE for Bazza’s fabulous Blog ‘To Discover Ice’

Hello Hels, I like Streeton's composition, use of light, and technique, but even so I feel that the overall effect is a little on the bleak side. However, I would enjoy seeing this museum exhibit, and often in person paintings show more vitality than in photographs.
--Jim

Many thanks. I hope you have the time to visit the Streeton exhibition.

oops I should have added a note about Geelong being the second biggest city in Victoria. Only 75 ks south west of Melbourne, it used to be an important shipping port.

I have no doubt that the impact of the Impressionists on non-French artists was huge, from about 1880 on. Particularly on Australian artists because so many of them studied at Paris art schools like Académie Julian.

Oh yes... we will have to get an art history bloggers' meeting at the gallery :)

Photographs work well enough in small, realistic, crisp paintings like the German Orientalists Ludwig Deutsch and Rudolf Ernst. But with large, Impressionist-type landscapes, the subtle elements of colour, light and shade, even form can be lost. Or changed.

Acted as baggage-handler for my wife who attended a conference in Melbourne last weekend.

We went to the NGV to see Whistler's Mother which is on display there. There is mention of Whistler's influence on Australia via Streeton and Roberts.

As usual the NGV was a highlight of our visit to your city.

let me propose marriage to you straight away :) Not only a talented blogger in his own right, but a husband who supports his wife in her cultural pursuits.

It seems that the young Streeton and Roberts were art sponges, visiting galleries and art schools overseas for as long as they were away. And they absorbed influences from a wide range of artists who were living in the UK or France at the same time. By the way, what did you think of the Whistlers?

The famous work is much larger than I imagined. The fact that US President Franklin Roosevelt was instrumental in making the portrait so ubiquitous was also new to me.

There is lots of ancillary information about Whistler and his life that really identify the importance of the artist.

We both enjoyed it immensely.

Hel I had forgotten that Streeton had been made an official Australian War Artist with the Australian Imperial Force in May 1918 and worked until the end of the war. He may have concentrated on the battle landscapes and not on machine guns and dead men, but I bet he was still affected, once he came back home.

Spot on! Streeton wasn't a war artist for a long time, but he visited Villers-Bretonneux in the Somme region of northern France – the site of the tragic tank-against-tank battle of 1918. He saw and remembered the utter devastation that had cost lives of over 1200 Australian soldiers in a very short time. It must have been a heart breaking scene.

See his 1918 painting, Villers-Bretonneux. The painting’s broad vista is of a landscape marked by conflict: the earth rent apart by mortar explosions, trenches scored into fields of green and clouds of shrapnel smoke billowing up. In the distance, figures can be seen bearing stretchers.

Thanks for another great and informative post Hels.
good to see curator Geoffrey Smith overcome some negative publicity.

Thanks fotofan for that tip about size. we mostly overlook dimensions in descriptions, and then get a surprise when we see the actual piece we thought we were familiar with. Why do I think Whistler's portrait of his mother was named 'Arrangement in black and grey'?
He was great pals with John Atkinson 'Grimmy' Grimshaw who was a master of night scenes.

Wonderful that Geelong Gallery is a stroll from the rail station so I have seen it many times between changing Vline services. love to you all from the centre, the epicentre of the fabulous Victorian Western District.

of all the things you mentioned, the first one I sat up and looked at straight away was the Geelong Art Gallery. I worked in the state government for a long time, mostly in Melbourne and Bendigo, but also for a while in Geelong. Yes the gallery was first planned in the 1890s, but thankfully it has been renovated and expanded quite a number of times since. And it hasn't ever lost its great gallery space nor its very attractive facade.

Every gallery says it is one of Australia’s oldest and most important public art galleries. And yes I might be biased because I loved Geelong and still do. But in this case, the gallery might be correct.

And you live in the Western District! When we are discussing Streeton, how cool is that!