Jeanne Lanvin - who was France's star couturier in the Inter War era?

Jeanne Lanvin (1867-1946) was born in Brittany. Her career began after her training as a very young apprentice at the House of Talbot, dressmaker and milliner. By 1890, this young woman had moved to Rue de Faubourge St Honore in Paris and opened her own millinery shop.

In 1895, Lanvin married Count Emilio di Pietro, an Italian nobleman, and two years later they had a daughter, Marguerite. The marriage didn’t last.. but the daughter’s influence did. Lanvin's second husband, whom she married in 1907, was Xavier Melet, a journalist at the newspaper Les Temps and later the French consul in Manchester.

Lanvin career was progressing nicely. She joined the Syndicat de la Couture in 1909, indicating her arrival as a fashion designer. While making her hats, she started to make dresses for a younger sister and daughter – clearly she believed there was basically no distinct­ion between dress designs for young girls and those for their mothers. The mother and daughter theme was an enduring one; even today the original 1923 Paul Iribe design of a mother and her daughter is the logo for the House of Lanvin. 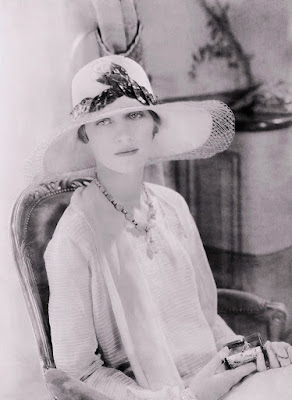 If her dresses were not cheap, it was not necessarily because her designs were complex. The materials and embellishments were ex­pensive (silk, taffeta, velvet, silk chiffon, organza, lace, fur and tulle), particularly her much loved ivory silk chiffon embroidered with pearls and gold metallic threads. But her Empire-waisted chemise silhouette was actually rather simple. In 1914, she moved to the Eastern-style velvets, a clear acknowledgement of the impact these designs had, once Les Ballets Russes arrived into town.

How extraordinary! Like Lanvin, many of the designers who dressed mothers in the years before and after WW1, were a] women, b] French and c] all born in a short time frame (1867-83). And each had her own specialist fashion business. Madeleine Vionnet (1876-1975) was known for her use of the bias-cut and Coco Chanel (1883–1971) who became famous for her use of jersey. The one male of that generation who competed successfully was Paul Poiret (1879-1944), also French.

Her Rue de Faubourge St Honore building included 2 work rooms for semi-tailored clothes, two for tailored ones, one for lingerie, one for hats, one used as a design studio and two that were given over to embroidery. Only the dye factory was separate. Years after the miseries of war had been put aside in Paris, Lanvin decided to expand. In 1926 she developed a menswear department, and then opened up branches of the Company in Nice, Cannes and Biarritz.

Lanvin’s most notable creation was her robes de style, a fashion long recognised in France. These small waisted dresses remained popular for many years. Even in the Roaring 20s when the robe de style became her version of, or alternative to, the flapper dress. Considered a nostalgic reminder of times past, these dresses coexisted with the abbreviated, streamlined, tubular dresses made famous by the more usual flappers. What did women make of the pretty, ankle-exposing bouffant skirt?

The robe de style was the look of the 1920s for women who could not wear the tubular lines of Chanel. Firstly Lanvin was no blushing 20 year old in the 1920s; she turned 60 in 1927! Secondly Lanvin understood that average-sized women found the flapper dress too flat in front and too straight over the hips. The robe de style came from popular bouffant styles that always suited normal women, rather than androgynous anorexics. Thirdly Lanvin loved clothes that were romantic rather than cutting edge, and she was successful because they gave women confidence. In that fragile uber-chic 1920s world, that was quite an achievement.

Whereas Chanel pared down decoration, Lanvin added more! Lanvin skilfully used trimmings, embroideries and beads in light colours. And note an accidental link (in my mind) to Swarovski. In 1895, Daniel Swartz changed his name to Swarovski and with two financiers founded the Swarovski Company. They established their crystal-cutting factory in Wattens in the Tyrol, Austria. This was just six years after Mme Lanvin established her own Company, and she used Swarovski crystals to adorn her trademark evening gowns. 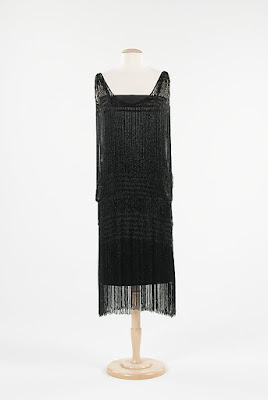 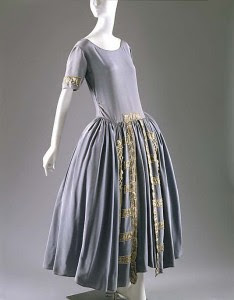 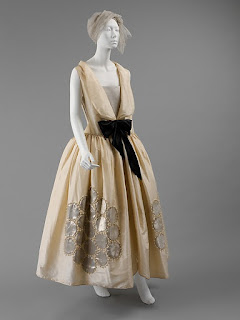 
A great skill developed in the use of embroidery. Jeanne Lanvin’s work contained a particular shade of blue that seemed to be inspired by medieval stained glass. So her preferred colour was blue, at least until the end of the 1920s. In the 1930s, Lanvin discovered black and white designs with geometrical effects. Had she been Deco’d up?

Art photographer Edward Steichen was hugely popular in both Vogue and Vanity Fair, producing thousands of fashion photographs during the inter-war era. He photographed the creations of all the major fashion houses, including Poiret, Chanel, Vionnet and Schiaparelli, but it might have been  Lanvin's fashions that gave him the biggest art thrill.

Lanvin’s administrative ability in the fashion industry was recog­nised in 1937 when at 70, she was appointed president of the Haute Couture committee of the Paris Exhibition. Two years later she was elected the Paris representative at the New York World’s Fair.

Jeanne Lanvin died in 1946 and her daughter carried on the business until she herself died in 1958. The Lanvin name has continued to be admired today; after all she built the fashion house that remains the longest-running in the world.

A recent exhibition of post-WW1 Lanvin fashions was held at the Paris City Fashion museum at the Palais Galliera (until Aug 2015). The displays revealed her love of colour and the Asian influences seen in her embroidery and decorative work, including in children's clothes, bridal wear and accessories.

I don't think mothers were all that happy about their daughters going out in skimpy flapper dresses. Very short dresses - and smoking - made their daughters look like tarts.

that may well be true in every generation... that daughters push taste beyond what their mothers will tolerate. Remember when Jean Shrimpton wore a mini skirt at the 1965 Melbourne Cup and had mothers fainting? I personally thought she looked fresh and modern :)