I was at least an average art history student at university, so I could certainly identify the work of Christopher Dresser, Charles Rennie Mackintosh, Peter Behrens, Ludwig Mies van der Rohe, Walter Gropius, Herbert Bayer and Marcel Breuer. After university I could identify Robin and Lucienne Day’s work with my eyes closed. But not Charles and Ray Eames. 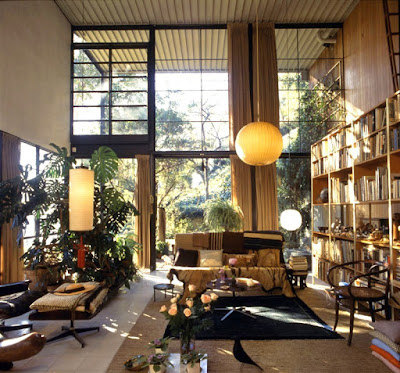 The husband and wife are more famous now than when they were alive, their work the ultimate examples of mid-century style. But Catherine Ince, curator of a retrospective show at the Barbican, said: “A mid-century lifestyle choice is not what they were. Their pioneering and influential work was about much more. It covered not only furniture, product design, architecture, exhibition and interior design, but graphics, photography, film, multi-media installations, new models of education and a whole way of seeing the world.”

Ince has spent much of the past three years studying archives that cover 750,000 photographs, drawings and papers, including personal and business correspondence. The search revealed the way the couple thought about design, expressed in the pithy maxim they loved:  “to provide the best for most, for the least”.

“Their approach was about satisfying the needs of the user. They aimed to produce designs that were better to use, which took account of spiritual and emotional needs. For them, design was the expression of an objective and a process of action — a problem to be solved by applying a curious intellect and engaging with the surrounding technologies and social conditions.”

Charles trained as an architect and Ray as an artist. They met at Cranbook Academy of Art in Detroit in 1940, married in 1941 and moved to California. Charles collaborated with Finnish-American architect Eero Saarinen on a chair for the Organic Design in Home Furnishings competition held by MoMA in New York. This led to Ray and Charles developing the use of laminated ply in a chair in 1946.

They were invited in 1948 to enter the MoMA Low-Cost Furniture Competition. Their design La Chaise, inspired by Gaston Lachaise’s 1927 sculpture Reclining Nude, was rejected by judges because it was considered too specialised and too expensive. However the judges admired its striking, good-looking and inventive moulded construction. La Chaise finally went into production in 1950 and is now one of the couple’s signature works.

In 1945 the pair began designing a case Study House #8 on a wooded bluff overlooking the ocean in Pacific Palisades Los Angeles. Construction began on what is now the Eames House in 1948. Made of prefabricated panels and glass, the influential couple lived there and entertained many leading contemporary designers, architects and film-makers.

The couple created a dynamic theatre of household objects curated with the utmost care, regularly changing them and their locations to enhance family life. They wanted to show their appreciation of other cultures and simple objects they found in everyday use in places such as Mexico and India. 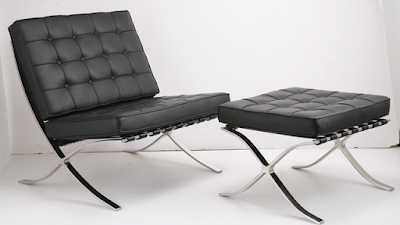 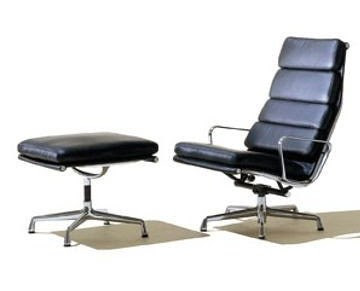 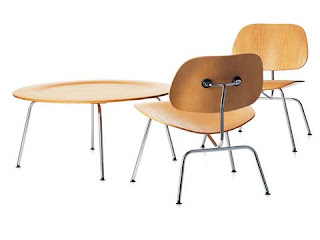 In 1943 they set up their design practice, the Eames Office. Their furniture designs were made by Herman Miller, for whom they developed the moulded fibreglass chair in 1949. Their iconic room set, For Modern Living, featured in a show in Detroit. This has been recreated for this Barbican show.


The couple designed numerous exhibitions for IBM, including its pavilion at the New York World’s Fair (1964-5). For the American government, they created Glimpses of the USA (1959) in Moscow, while Indira Gandhi commissioned them for the 1965 exhibition, Nehru: His Life and his India.

The Barbican article does not say who their greatest influence was. The couple’s search for perfection in largely undec­or­ated designs led to exhaustive modelling and this resulted in designs that had an honest, functional aesthetic. So it is not a huge leap to suggest the couple was most inspired by the Bauhaus designers in Germany, design artists who believed firmly in the philosophy that Form Follows Function. One look at Marcel Breuer and Ludwig Mies van der Rohe’s chairs from the mid 1920s suggested the American couple also liked the Germans’ materials and shapes.

Can we blame them for present day plastic moulded chairs? The Eames chair almost looks like it might be comfortable.

The living room looked attractive and airy but quite crowded. I assume the couple did not have small children.

One paper says we certainly can! In 1948 the International Competition for the Design of Low-Cost Furniture officially opened for submissions. Charles Eames arrived at the workshop of John Wills, a noted fibreglass manufacturer. Wills had already developed a manufacturing technique which allowed for fibreglass to cure at room temperature, eliminating the need for heat and pressure to be involved the process. An armchair was the first piece of furniture to be thus designed.

See a photo at: http://www.eamesoffice.com/scholars-walk/eames-molded-plastic-chair-history/

Charles had a daughter with his first wife, but he and Ray did not have any children together.

The living room was a delight, but would it have been doable in the rough and tumble of family life? From the photos, it looked like a rather luxurious space where kids and dogs should not have been allowed to run around freely.

Designers Charles and Ray Eames established their long and legendary relationship with Herman Miller in 1946 with their boldly original molded plywood chairs. The aesthetic integrity, enduring charm, and comfort of the chairs earned them recognition from Time magazine as The Best Design of the 20th Century. Time called the design "something elegant, light and comfortable. Much copied but never bettered."

many thanks. I grew up in the 1950s so I am not very fond of moulded plywood furniture. But I understand how important the Eames innovations were. The seat and backrest were originally joined together in a single mould. Then they created two separate pieces for the seat and backrest, joined by a spine. So I will go back into the post and add a photo of moulded plywood furniture from the late 1940s.

Oh, I love that living room. Sigh. I'm afraid I couldn't live there - I'd never be able to tear myself away to work. I am a 70s child and also hated retro or moulded furniture for many years but over time I came to appreciate them, I guess.

Hello Hels, The Eames's were popular in America, and much copied, to the point of cliche. We had a set of white moulded chairs which were of that ilk, which were comfortable and sturdy. I can't remember what happened to them. Since I am a fan of the famous American singer Emma Eames (first married to painter Julian Story), I wondered if she were somehow related, but a few quick searches turned up no information.
--Jim

I have a rule of thumb about design that seems to work. We loathe our parents' choices because we grew up with them, so we throw their items into an charity shop as soon as we can. We quite like our grandparents' design tastes but may not take the pieces into our homes because they are old and falling apart. But designs from the great parents' generation are now historical treasures and we pay a fortune to buy them from antiques shops :)

Very popular! There is a small reference book that our students were asked to keep in their top desk drawer all the time - Icons of Design of the 20th Century, written by Charlotte and Peter Fiell and published by Taschen. The catalogue goes from Aalto to Zanuso! Dozens of the designers get 1 or 2 pages each. Mies van der Rohe gets 3 pages and only Le Corbusier and the Eameses get 4 pages each!

I don't like advertising, but I am very interested in knowing whether you have Eames chairs or Charles Eames Style chairs?