An exhibition of Elioth Gruner's landscapes: master of the light

The son of a Norwegian father, Elioth Gruner (1882-1939)was born in New Zealand and moved to Sydney with his family while still in nappies. Although Gruner received his first art lessons from Julian Rossi Ashton at the NSW Art Society part time, for many years the young man could dedicate little time to art. To help his widowed mother, he worked during the day as a drap­er's assistant and later as a window dresser. He suffered worse financial hardship becoming the sole sup­p­ort of his family after his brother's death in 1898. Even studying with Julian Ashton was too costly for the young man to cope with.

By 1901 his first work was accepted for hanging in the Society of Artists Spring Show. But I don’t have any of his works until we come to small oil sketches of beaches around Sydney, 1912-4 very much in the tradition of the 9 x 5 Impressions shown at Buxton’s Rooms in Melbourne back in August 1889. He claimed his big influence was Tom Roberts and perhaps this is why Gruner was event­ually thought of, particularly in Sydney, as the heir to the impress­ion­ist past­oral tradition of Australian art of the Heidelberg school. 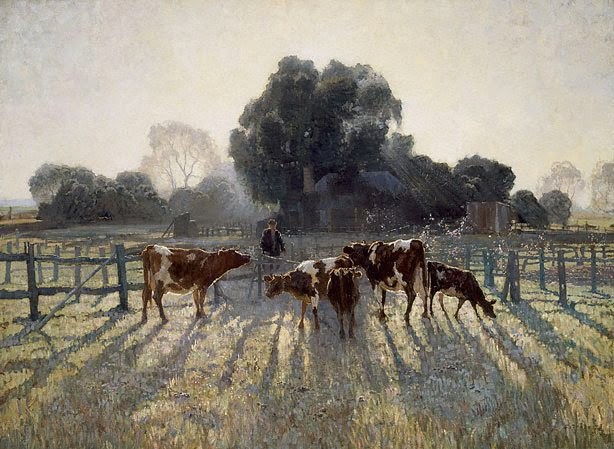 But there were two large differences. Heidelberg artists were Melbourne-educated in art, and worked in Heidelberg or other suburbs on the fringes of Melbourne. And Tom Roberts and his colleagues became famous in the late decades of the 19th century; Gruner became well known in art circles at least a full generation later.

I assume Gruner saw Louis Buvelot’s landscapes like Winter Morning Near Heidelberg 1866. Buvelot contributed to the openness of the coun­tryside, so typically Australian in its colour, fauna, flora and weather. Buvelot’s dusty roads, trees and river banks must have delighted Gruner.

Gruner finally achieved national recog­nition just before WWI broke out. The Wave c1913 was a delightful summer image that Australians loved. This small canvas was divided into two thirds of sand and one third sea water, with only a small dia­g­onal of swimmers and not too many colours. A ch­ar­ming image, with adults in summery street clothes and child­ren in bath­ing suits. Of course beach scenes were very popular in Edwardian art, as we know from Phillips Fox and others. So Gruner was following a proud tradition.

Between 1915-20 Gruner foc­uss­ed on landscape against the light. Painting in the open, he spec­ialised in eff­ec­ts of early morning. In Summer Morning 1916, where the worker in the field laboured in the heat, the light in his canvases was crisp, clean and sharp. Spring Frost 1919 was my favourite. It was a delightful and small image, set in the early morning light, as were so many of Gruner’s art. People loved the man checking the cattle in the foreground; in the back ground you can see the family home, surrounded by trees with the light streaming through. And Morning in the Clearing 1920, with its dominant blue sky and irregular trees.

In 1923 Gruner visited Europe and was away for 2 years. Did he change, after he came home? Winter’s Morning was just as drowned in clear light, but this time the cold air of the new day hung in the air like a fine mist. The grass seemed to be still covered in moisture; the air out of the cows’ noses seemed to be steamy. The brushwork was thicker and faster, but he was still interested in the study of light. 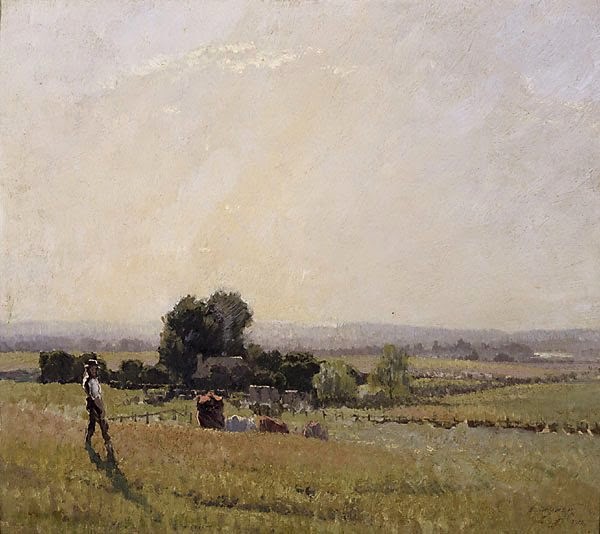 The Wynne Prize was first awarded by the Art Gallery of NSW Trus­tees in 1897, for the best landscape paint­ing of Aus­tralian scen­ery com­pleted during the previous year. Gruner won it in 1916 for the work that I mentioned, Morn­ing Light; again in 1919 for Spring Frost 1919; 1921 for Valley of the Tweed; and 1929 for On the Murr­umb­idgee. He also won it in 1934, 1936 and 1937! The man constantly produced prize-winning landscapes over 20 years, an achievement not managed before or since Mr Gruner.

I cannot explain it. In 1916 and 1919 Australians were still used to gentle landscapes. But in inter-war era, the nation got used to a more assertive form of modernism that was self consciously avant-garde and more brutal in its approach. So how did this rather elusive, old fashioned and quiet landscape artist keep winning the Wynne Prize until WW2? 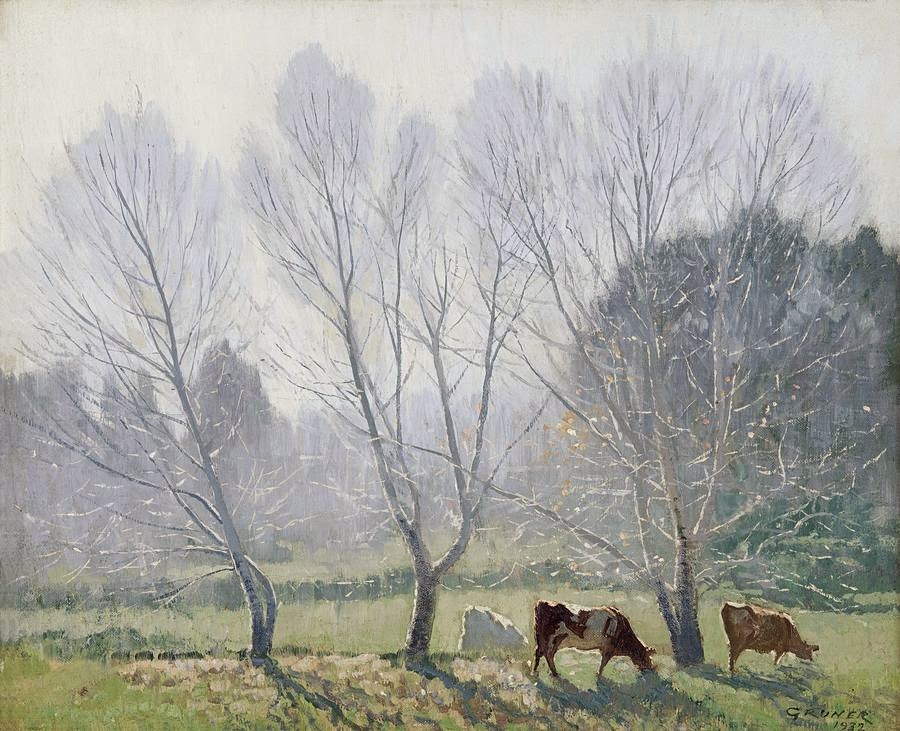 As late as the 1930s, Gruner was painting transient weather effects. Examine how he showed morning mist rising from the ground in Frosty Morning 1932. Warmed by the rising sun, the mist was suspended for a few magical moments before disappearing in the light of day. Elioth Gruner was undoubtedly the champion of mists and morning light.

Gruner died in 1939. He had often been referred to as the last of the Australian Impres­s­ionists but he was act­ual­ly one of Austral­ia's most popular tr­ans­itional painters from WW1 to the 1920s and into the 1930s. Grun­er's work is represented in the art gal­l­eries of all Aust­ralian galleries, especially the Art Gallery of NSW in his old home town, Sydney.

Note that Canberra Museum and Gallery’s senior curator of visual arts, Deborah Clark, felt Gruner’s fame has receded in the last 75 years. She viewed 200 of Gruner’s works from all over Australia and selected 70 of them to display in "Eliot Gruner: The Texture of Light". Canberra locals and visitors could see the works he produced while on his paint­ing trips around Canberra, Cooma, NSW’s south coast and the Southern Highlands. At the end of June 2014, this exhibition travelled to the Newcastle Art Gallery.

I really like his work. Interesting to me that he must have often been up early to capture morning light, unlike writers who often did their best work late at night.

There have always been differences of opinions about the Wynne Prize. Have a look at the 2010 kerfuffle when there was quite a controversy.

Hello Hels, The story of Elioth Gruner fits almost to a T Saki's story The Stalled Ox, which also might provide some insight into Gruner's specialty and career.

It perhaps does a disservice to the overall appreciation of a painter when his work is constantly reduced to a single trick or sound-bite like "master of light"; this phrase especially makes one think of the awful American painter Thomas Kinkaid, one I'm sure Gruner would not want to be grouped with.
--Jim

that was so true of the Heidelberg artists in the 1880s and 90s - young, single, living the good life grilling chops on a camp fire :) But poor old Gruner had to support his mother and family in a shop. No fun night life for him in the young years.

Probably there is always going to be debate about "the best landscape painting of Australian scenery by Australian artists, completed during the previous 12 months". I raised this issue re Gruner because I had expected some agreement about general art trends.

Interesting about 2010, yes!!! The prize awarded to Sam Leach who did a version of the C17th work Boatmen Moored on the Shore of an Italian Lake by Dutchman Adam Pijnacker. The question was: did the prize go to a painting which did NOT fulfil the competition's requirements?

agreed.. an artist should not be reduced to a single trick like Master of the Light. But I need to add another thought - I carefully _selected_ three of Gruner's many works that would specifically illuminate (no pun intended) my theme. The reader will know nothing about the the hundreds of other works he did.

One of my favourite artists. Thank you. I love this painting: Landscape, 1929 at the Canberra Museum and Gallery.

I'm just home from a few days in the Hunter-Mudgee-Bathurst region, taking lots of boring pix of nice churches, old gold towns like Golgong, Hill End, Sofala. If any of this would be of interest to you please let me know.

that is why I love blogging... people are generous with ideas, photos, references etc. Many thanks. I love old gold towns.

Helen I wonder why his paintings were so small. Even his Sydney Harbour theme, which could have been huge, took up only 48 x 58 cms.

they are small, aren't they? The Australian Dictionary of Biography says that when Gruner returned to Sydney in 1925, he accepted Sir William Orpen's advice to make smaller pictures, thin down his paint and achieve a drier, pastel-like surface. Apparently this would achieve an English style of modernism.

hmmm but why do that with an epic vision like Sydney Harbour?

I just had a look at your blog ~ this post on the artist Gruner struck me at his use of light. My aunt, who’s an artist, always talks about how much of a skill it is to create a realistic use of lighting in painting. It’s not easy! And, although, those landscapes are not what I’m usually drawn to- it was lovely to see and inspiring. Thank you for sharing your passion for history and art with me and so many others.

Thank you. I have been writing the blog since Nov 2008, and I still have no way of predicting whether readers will enjoy a particular topic or not.

The most popular topic EVER was a history of Californian Bungalows in Australia - it attracted thousands and thousands of readers. But a review of Anthony Trollope to Australia only attracted a few hundred readers. Even though I loved both topics equally.