A sterling silver dinner-set fit for a maharaja

One of the questions I was asking in Maharaja splendour in Canada  was how many Princely States were there in India and how wealthy/influential were the maharajas. Wiki estimated that the number ranged from 160 princely states in 1872 to 202 in 1941.

Maharaja Bhupinder Singh (1891–1938) was the ruler of the princely state of Patiala in the south-east of the Punjab. He served on the General Staff in France, Belgium, Italy and Palestine in WW1 and he represented India at the League of Nations in the years after the war. But I had initially been very interested in this Maharaja because he was the one who had bought the most fabulous De Beers jewellery from Cartier of Paris in 1928 - five rows of diamonds encrusted in a platinum chain.

And since Patiala was said to be among the wealthiest princely states of British India, I am once again very interested in him because of the banqueting service hallmarked by the Goldsmiths’ and Silversmiths’ Company of London in 1921. It had been commissioned by the Maharaja of Patiala in honour of the Feb 1922 tour of India by the Prince of Wales, later King Edward VIII. The entire dinner service must have arrived in India in time; it was indeed used at the State Banquet held in Prince Edwards's honour. Some sources say that once the three days of royal feasting was over, the set was never used again. 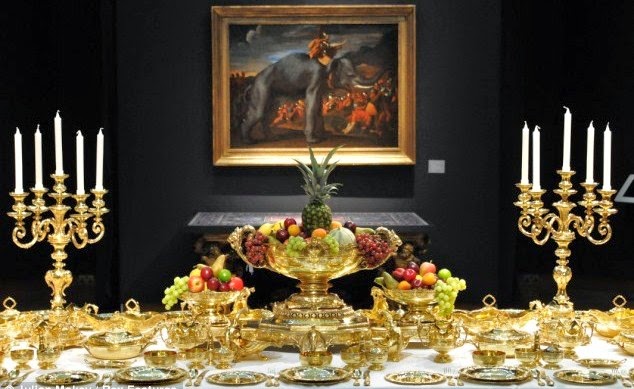 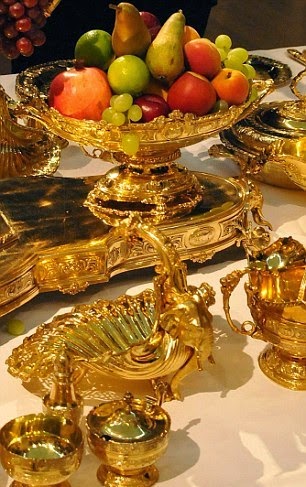 Each piece with a scroll and foliage border above cast and chased panels of animals, separated by cast daggers, variously engraved or with coat-of-arms, crown and initials. The most impressive object was the centrepiece, formed as three bowls supported on a shaped conforming stand. The flower and foliage decorated feet were applied with cast elephant's mask and the handles of the bowls with cast lion's masks. The stand was not small, being 115 cm wide. I was also very impressed with the pair of soup tureens that had lion mask-capped handles, detachable covers and quatrefoil ogee loop handles. Each was 45 cm wide over the handle.

Needless to say, not even a maharaja’s dining table could hold all the 1400 pieces at one time. Alas some of the pieces went missing eg there are 183 dinner-plates, all that is left from the set that was orig­in­ally designed for 200 guests. Follow the Christie's reference for further information.

Clearly this Maharaja was not an ordinary man. He was captain of the Indian cricket team, the first individual in India to own his own plane and he definitely loved the 20 Rolls Royce cars that he drove. So perhaps it was not surprising that £2 million (USA $3.25 million) paid at the July 2013 auction set a new world record for an English dinner service. Impressive!

I had assumed that times must have been tough for the family, after Bhupinder Singh’s death in 1938. Otherwise why else would they sell the dinner service? But since his son Maharaja Yadavindra Singh was the first Indian prince to sign the Instrument of Accession, thus facilitating the process of national integration after independence in 1947, perhaps the family was actually well looked after by the modern state. 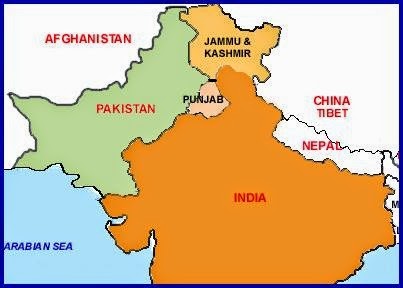 I may regret asking but who bought the set and what did they pay?

The thought of being a guest at the table set with such a princely dinner service is quite exhilarating.

From the pictures, it is surprisingly attractive rather than vulgar. But, what it would be like with food served upon it, we cannot imagine. Would any food look appetising enough to eat,it would one be so dazzled by the golden gleam of it all that one could not lift a knife or fork?

One of our parents was born in India under the British Raj so India has always held a fascination for us. One day we plan a visit....

I may have a different attitude had I been invited to dine in such splendour, but really it is a disgusting display of wealth by the maharajah while no doubt many of his subjects starved. The British indulged them because no doubt they kept the population in check and peaceful.

As Jane and Lance suggest, food presentation would be rather lost on such crockery.

Hello Hels, I imagine that the art of food presentation was very highly developed, with elaborate forms, gold leaf, and exotic tidbits. Also, the royal and wealthy guests would have had a pretty high standard anyway of elaborate tableware--this might have been seen as a step-up suitable to the occasion.

I do wonder about the original cost of a service like this, and what it really meant in terms of affordability at the time. The problem with inflation indexes and the like is that expenditures at different levels are not comparable.

Christie's reported the details of auction held in July 2013. The winning bid for the banqueting service £1.9 million = USA$3.1 million but the winner bidder was not named.

table was set at the auction previews, admittedly not for hundreds of people but at least for dozens. The whole display looked gorgeous. (Of course I would say that! I adore sterling silver art objects).

You are children of the Raj and you haven't been to India? It is totally amazing country .. but big. Leave yourself a ton of travelling time.

The display of wealth, at least to those who ever visited the princely palaces, must have been stupendous. Bhupinder Singh of Patiala had more diamonds, cars, trains, planes, wives, children and palaces than any other royal in the world!

Since the entire silver banquet set was commissioned in honour of the Feb 1922 tour of India by the Prince of Wales, you are right - the occasion DEMANDED the expenditure.

But you are also right that affordability was a slippery concept. When Bhupinder Singh wanted Rolls-Royce cars, he entered the showroom, ordered the best models and took them ALL home. If he had wanted, he could have bought the showroom as well.

Hi Helen, have you seen this book?
"Made for Maharajas: A Design Diary of Princely India" by Amin Jaffer

I bought it a few years ago. It deals with jewels, cars, guns, clothes, furniture, trains, yachts, and the whole range of tableware including an old b and w picture of the service from your latest entry. A lavish publication.
Best wishes, Neil.

I will check it out, many thanks.

Since there were some 600 princely states in India before 1947's partition, independence and unification, that book is going to have quite a number of diamonds, yachts and luxury cars to examine :)

many thanks. Are you interested in a particular historical era? or part of the world?

Beautiful, isn't it. I cannot imagine setting the table for 200 guests and feeding them at one time. My maximum used to be 24, and even that was exhausting. Now it is 12.