Too many babies, grinding poverty, arsenic poisoning and a hanging in Sydney

In the book Last Woman Hanged, Caroline Overington exhaustively researched the case of Louisa Andrews Collins. She was a 41-year-old working-class mother of 10 children who was tried for murder four times and was the last woman to be hanged in NSW. The book, published by Harper Collins, will become available this month. In the meantime, all my material comes from the Sydney Morning Herald, the ABC and Launched into Eternity.

Louisa was born in 1847 in NSW to an ex-convict father and a free-settler mother. She was the second child in a large family and when she reached 14 years of age, she became a domestic servant to a solicitor. She was pretty, dark-haired and plump, and wanted to have some fun. But her parents couldn’t afford to keep her, so married she had to be. Husband Charles Andrews was a boring, old widower. 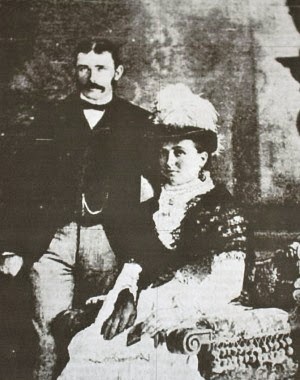 Wedding day for Louisa and her second husband Michael Collins, 1887

The couple settled down to domestic un-bliss and fun-loving Louisa spent her time being pregnant, delivering and nursing a LOT of children. When the economy fell over, they moved to slum-ridden Botany, in Sydney's south. The rows of workers' cottages were too small for the large families and they had no running water. But they went there because colony's large wool-washing and packing industry was based in Botany. Charles was happy to find work in a wool shed.

With an ever-growing family and not enough money, the Andrews family had to take 4-6 boarders into their small cottage. Exhausted Louisa found the cycle of loveless domestic drudgery to be grinding, so she liked to drink, and she liked to dance. Alc­ohol abuse was rife. Husbands would also drink and then their fists would fly.

Neighbourhood thought that Louisa liked the male boarders rather too much, with her favourite being Michael Collins, a handsome and much younger man who worked for the wool sheds, carting the dirty sheepskins across the city to be washed for sale. They became lovers. Her husband found out and threw Collins out of his home, with police assistance. But Louisa kept seeing her young lover, and her children were not adequately cared for.

In 1887 Charles suddenly developed stomach pains, vomiting and diarr­hoea. Louisa wanted to get her husband’s will quickly drawn up and sign­ed, since his estate included a hefty life insurance policy. He died within a week and Louisa immediately caught a tram to Sydney to inform the insur­ance company and the bank.

Locals were not surprised that Collins took up with the very young, very sexy Michael Collins soon after the death of her first husband. The couple partied and danced, and married within three months of Charles Andrews' funeral, with the bride a little bit pregnant. She was in her 40s yet she had to go through another pregnancy - her 10th!

Alas the new husband fell ill within months of that marriage, displaying the same symptoms as the first husband. But this time, Louisa adored her husband and nursed him with medicine and love. When he too died, an autopsy found the cause of death to be arsenic poisoning. Was Louisa Collins guilty of poisoning her two husbands with arsenic?

Collins was immediately charged with murder. The so-called Borgia of Botany, as the newspapers called her, remained in gaol for two years, through four trials. The first two times she was tried for the murder of Michael Collins, the third time for the mur­der of Charles Andrews, and finally, for the murder of Charles again. Ms Overington discovered all the evidence against Collins was circumstantial, leading the first three juries to return no verdict. 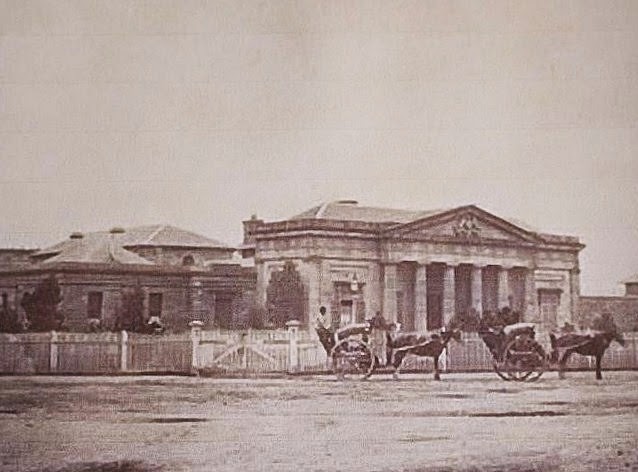 Sydney was suffering a rat plague in the 1880s, which meant increas­ing sales for the poison Rough On Rats. Plus evidence was supplied which showed both husbands had excessive contact with arsenic in their jobs as sheepskin tanners.

The Crown went after Louisa relentlessly. The case was not only tried in front of four juries, but the Sydney papers covered the trials in lurid detail. The Premier Sir Henry Parkes led the noisy argument for Collins' hanging on the floor of the NSW Parliam­ent. The letters pages of the Sydney Morning Herald were full of opinions about Louisa. And the women of NSW were mobilising. Petitions and letter-writing campaigns were launched on Louisa's behalf; so were marches in the streets. This was raw C19th colonial history in action.. its gender politics and social conditions!

There was only circumstantial evidence in all the cases, about which the first three juries were underwhelmed. So why did the fourth jury fail her? Overington believes that the colony's male establishment felt threatened. There had been a number of poisoning deaths, and the auth­orities were very concerned because women's position in colonial society was bleak. Most working class women could not get a divorce, and if they managed it, they lost their children. They didn’t have the vote and they received no police protection for marital rape or brutality.

But nothing helped and, having maintained her innocence throughout the four trials, Louisa Collins was brutally hanged in January 1889. The youngest of Louisa’s children were taken into an orphanage where they were lost to the rest of the family.

Women’s marching had not saved Louisa, but it did help energise and focus the women’s movement. Because human rights had to be extended to women in the colony urgently, the Suffragettes started organising themselves soon after her final trial.

The author's important questions: Was Louisa Col­lins a victim of the colony’s political pressure, men's fear and women's push for greater equality? Was she was a drunken slattern who killed consecutive husbands by cruel arsenic poisoning? Was she the wronged mother of 10 children, a victim of a male-run system that conferred on women none of its rights but all of its responsibilities? Was she the inspiration for the colony's embryonic suffragette movement?

Hello Hels, It is interesting to compare this case with the Lizzie Borden murders of just a few years later. In the Borden case, many felt that it was her status as a female combined with her social status that led to acquittal. It would seem that Louisa's lower caste was a major point against her, especially when the prosecution was set on a conviction. I would imagine that various elements of Louisa's story are sadly still enacted today.

By the way, Rough on Rats is a great product name. Ebay has lots of the company's memorabilia, from ads to containers. Here is a link to an amusing trade card (note that the baby has one of those silver-and-coral rattles):
http://www.ebay.com/itm/antique-victorian-TRADE-CARD-ROUGH-ON-RATS-poison-SILHOUETTE-jersey-city-nj-FUN-/301373249641?pt=LH_DefaultDomain_0&hash=item462b3ed869

Whenever we study women's history before and after Federation, it seems that Australia and New Zealand were well ahead of the rest of the world. Not necessarily so.

Many question unanswered but it really does sound as if she should not have been convicted.

Thank you for the reference to Louisa's hanging in class today. Capital punishment was barbaric in Scotland or in whichever country it was carried out. But what chance did the anti hanging people have in Sydney, when it was the Premier who was screaming the loudest.

I am very interested in the Lizzie Borden case on two important grounds.

1. Was there direct evidence of her involvement in the two murders, as opposed to circumstantial evidence alone? If there was no direct evidence, did the court handle the case according to law?
2. Borden was not from a family living in squalour, but can we analyse the case in terms of women's rights a la 1892? Did women rally around her case in marches, petitions, a call for universal suffrage etc?

New Zealand and Australia were indeed the first and second nations in the world to give women the vote in Federal elections in 1893 and 1902 respectively. Thus both countries were both advanced and relatively peaceful.

But there were many areas of human rights where women were severely oppressed eg divorce, property, employment etc etc, even well after Federation.

Three separate juries found there was no direct evidence of the crimes and that the circumstantial evidence was not compelling. Even if she did poison the first husband, surely the prosecution had to have proved their case in court.

She adored her second husband and would never have harmed him.

capital punishment was indeed barbaric. I am not against any of the trials analysing direct evidence of Louisa's involvement in murder and finding her guilty. I am against a botched and barbaric execution by hanging. Let her spend the rest of her life in gaol, if she was found guilty.

Do you remember when Sir Henry Bolte and Sir Arthur Rylah were frantic to have Ronald Ryan hanged in 1967? The political pressure to execute was so strong, they managed to defeat the opnions of lawyers, academics, 11 members of the jury, the entire ABC etc etc.

I just came across this exhibition announcement, which I thought would interest you as it reminds me your recent post. It is about women as perpetrators or victims in 19th century murder trials, and I find it interesting that is is being held at a law school, and presumably emphasizes the legal aspects of these trials.

I think the Yale comment about "murder trial pamphlets being a rich source for studying popular culture" is true. If we just read official court documents, we miss out on what people really think.

Carol Baxter's book "Black Widow: The true story of Australia's first female serial killer" is just about to be published by Allen & Unwin.

Found guilty of using arsenic to murder both her first and second husbands, Louisa Collins' case became the cause celebre of Australia. Collins was brought to trial three times, only for each of the hung juries to be dismissed. Eventually she was found guilty, sentenced to death at her fourth trial in 1888 and executed in 1889.

Baxter analyses the judicial processes, looking at the political, legal and social ramifications following the execution.

Many thanks. I will look for the book after its publication date.

The title of the book is very provocative, especially if we think Collins was condemned on the basis of circumstantial evidence alone. The three first juries were not convinced by the evidence against her.