Gifts to soldiers in the WW1 trenches, from the royal family

Princess Mary  (1897–1965), Princess Royal and later Countess of Harewood, was the third child and only daughter of King George V and Queen Mary, and granddaughter of King Edward VII.

The Sailors and Soldiers Christmas Fund was inaugurated by 17 year old Princess Mary in October 1914 to pro­vide a gift to every service­man, soon after the Great War broke out. The idea was the initiative of Princess Mary herself, so she organised a public appeal which raised the funds to ensure that every sailor afloat and every sold­ier at the front received a Christ­­mas present. Due to the strong pub­lic support for the gift, which saw £163,000 raised, the eligib­ility for the gift was widened to include every person wearing the King's uniform on Christmas Day 1914.


The majority of gifts were for smok­ers and comprised an ornate embos­sed brass box containing tob­acco, cigarettes, a pipe and lighter, Christmas card and a photograph of Prin­cess Mary. For non-smokers writing paper and a silvered pencil were provided. For Indian troops sweets and spices were given instead of, or as well as cigarettes. 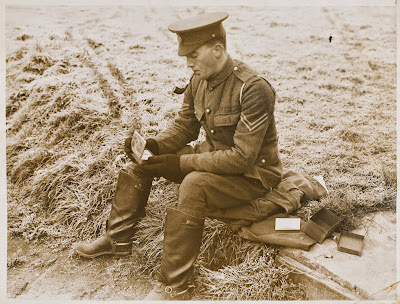 After Christmas 1914 a surplus of funds enabled the scheme to be extended. A simpler gift was given out to all other servicemen, con­sisting of a pencil in a cartridge case, cigarettes, tobacco and New Year card. In total 426,000 of these tins were eventually distributed to members of the British, Colonial and Indian Armed Forces in late 1914 or early 1915. And as the number of grieving parents, widows and orphans went up. it was decided that widows and bereaved parents should also be included as legitimate recipients.

I imagine the lads, lonely scared and away from home for the first time, found great comfort from the small luxury goods. I also think receiving a thank you photo of a young, lovely princess would have meant more to the soldiers than a photo of an elderly, grumpy looking king.

In total, there were some 2.6 million service people in the British, Colonial and Indian forces, and 2.5 million gift boxes were event­ually made. But not all gifts reached their intended recipients as soon as they hoped. Perhaps this was because the Cunard ocean liner RMS Lusitania was sunk in May 1915, losing large quantities of brass.

The Museum of Victoria’s Princess Mary box was made of brass (37 mm in height and 125 mm wide) with a hinged lid. The lid had embossed decoration: in the centre Princess Mary's head was in profile, surrounded by a wreath and the letter M twice. In each corner of the lid was the name of a British ally; the top horizontal edge of the lid was decorated with a bayonet and scabbard; along bottom edge a plaque bearing Christmas 1914 with the bow of a Dreadnought each side; each vertical edge was adorned with three crossed flags with a disc in front bearing France and Russia. 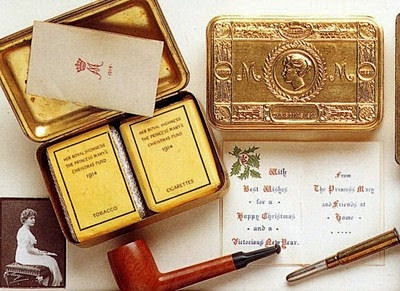 Brass box. The two packages (tobacco and cigarettes) fitted into the tin with just enough room for the pencil in between.
photo credit: Imperial War Museum

The card read “With best wishes for a Happy Christmas and a vict­or­ious New Year, from the Princess Mary and friends at home”. When the card had been read and the cigarettes consumed, servicemen in the front lines could then used the tins to carry other small items that were precious to them.

Throughout the 4.5 years of the Great War, young Princess Mary visited hospitals and welfare organisations with her mother, assist­ing with projects to give comfort to British servicemen and help to their families. Her public duties reflected her particular concerns i.e nursing, the Girl Guide movement and the Land Girls. She married in 1922.

I imagine that by October 1914, the British Empire armies still thought the war would be over by Christmas. But losses quickly mounted; more than 10,000 were killed, missing or wounded within a month of war breaking out. When Christmas 1914 came and went, thoughts turned towards winter in the trenches. A roaring trade soon developed in gifts for men at the Front, ranging from Fortnum’s hampers (from one to five guineas) and six-shilling silver lighters, a practical present for active service, to simple handkerchiefs, socks and food parcels.

Princess Mary seemed very compassionate to lads barely older than her. How much support did she receive amongst royals and military people? Did she understand about different religious and ethnic groups?

*nod* from all her public duties with her favourite organisations, you can tell Princess Mary was a very caring human being. She worded the Buckingham Palace press release re the Fund in her own name.

I don't know if she knew that Indian soldiers were largely not Christian and might need different gifts, but the Fund Committee certainly did. Non smoking gift packages were made available, Sikhs received sugar candy and spices etc etc

Being a person in the the commercial world, I can't help thinking what a great contract it would have been for the suppliers although cigarettes would not be on the list of gifts in these days. Nice piece of history as we draw close to the festive season Hels.

Loved your lecture series on Memorialising The Great War. Poetry & plays are good, but the visual arts pack more punch. Small luxury goods like the embossed brass box would have been loved by soldiers. It is very poignant to think the recipients may have returned home damaged or dead.

Hello Hels, Those in the armed forces contribute the ultimate service to their country. Although we memorialize them and occasionally honor veterans, it is nice to read of this gesture that acknowledges their difficult life, and loneliness by being separated from home. In the U.S. there were many drives to provide gifts for soldiers, often knitting, baking or other hand-made gifts, which were then distributed, but I never heard of an overall "no soldier forgotten" effort like Princess Mary's.
--Jim

You really have to imagine what it might have been like back then as a serviceman and just how wonderful it would be to receive such a gift from a Princess when respect for royalty was still very high. I imagine many of the tins ended up in quite a battered state, but I am sure many have been treated with kid gloves and handed down in families.

It would certainly have been a huge honour for a company, to be asked to make the gift boxes and their contents. The biggest manufacturing problem was the brass...which was being consumed in the production of weapons and was hard to locate in vast amounts.

Cigarettes were a tricky luxury item *nod*. Nurses were treated to chocolate, presumably because nice women did not smoke!

When the war broke out in 1914, it was death on an industrialised scale. The nation was immobilised by grief. So it took a few years to find how to memorialise the young men and bring some small comfort to the families.

Every city and country town across the British Empire created a simple statue or shrine. Churches added stained glass windows in memory of one or more lads in that parish. Heart breaking visual art objects.

difficult life, loneliness and separation from home. Exactly so. Plus we can add the hideous conditions in the trenches.

Perhaps the men might have loved receiving warm, clean socks or delicious food. But in practical terms, we have to hope that Princess Mary's gift made the men feel remembered and valued.

It is difficult for us to remember that in 1914-16, men _volunteered_ to rush over to Europe and to serve the King and country. It was only later that young men had to be conscripted, to keep up the numbers.

If my sons were conscripted, I would have fought it tooth and nail. The army could have put my boys to work in hospitals etc, but giving them weapons to kill other peoples' sons would have been unacceptable. Not that anyone listened to their mothers :(

is there a connection to WW1? I don't do advertising.

Lady Elizabeth Bowes-Lyon, later the Queen Mother, also knew the pain of the First World War. Four of her brothers served in the army. Her elder brother, Fergus, an officer in the Black Watch Regiment, was killed in action at the Battle of Loos in 1915. Another brother, Michael, was reported missing in action two years later. Three weeks later, the family discovered that he had been captured after being wounded and he remained a prisoner of war in Germany for the rest of the war.

Glamis in Angus was turned into a convalescent home for wounded soldiers which the teenage Lady Elizabeth Bowes-Lyon helped to run. She was too young to serve as a nurse but she would write letters for injured soldiers and run errands from the local shops for them.

Images from Glamis are a revealing insight into the care and compassion of the future wife of George VI - whose stoicism and compassion would become an enduring symbol of the Second World War.

perfect. The Princess Mary the Princess Royal and Lady Elizabeth Bowes-Lyon had three close links: 1] they were both young teenagers during WW1, 2] they both involved themselves in helping deployed or wounded British soldiers and 3] they become loving sisters in law a couple of years after the war ended.