Your Brisbane tells a sorry tale. Karl Ernst Eschenhagen (born 1850) was a baker who emigrated from Germany in the 1880s and established one of Brisbane's best hospitality businesses. He started in a George St bakery, opened branches in Edward St and Fortitude Valley and lastly opened a Queen St restaurant that could seat 500 diners.

Ernst Eschenhagen had become a famous baker, restaurateur and caterer. His surname was surmounted on the turret, was painted on both windows and was sunk in brass letters into the footpath. Anyone passing could not help but be impressed. Even the inscription "By Special Appointment to His Excellency" above the door was not a commercial boast but a statement of Vice-Regal fact; his restaurant had catered scores of Government House receptions.

Things turned nasty for Eschenhagen at the turn of the century. As a result of Australia's involvement in the Second Boer War (1899-1902) in South Africa, anti-German sent­iment ran rampant, leading to a boycott of the Esch­enhagen business. Before this war started, there was no more popular and prosperous caterer to be found in Brisbane. After the Boer War, his shop was a desert. The business did slowly recover, but Ernst Esch­enhagen took his own life in 1906.

Who knows what part was played by the hatred endured during the war years. During the Second Boer War, there were certainly attacks on Germans in the press, in shops and on public transport in Great Britain, but clearly it happened in Australia as well. 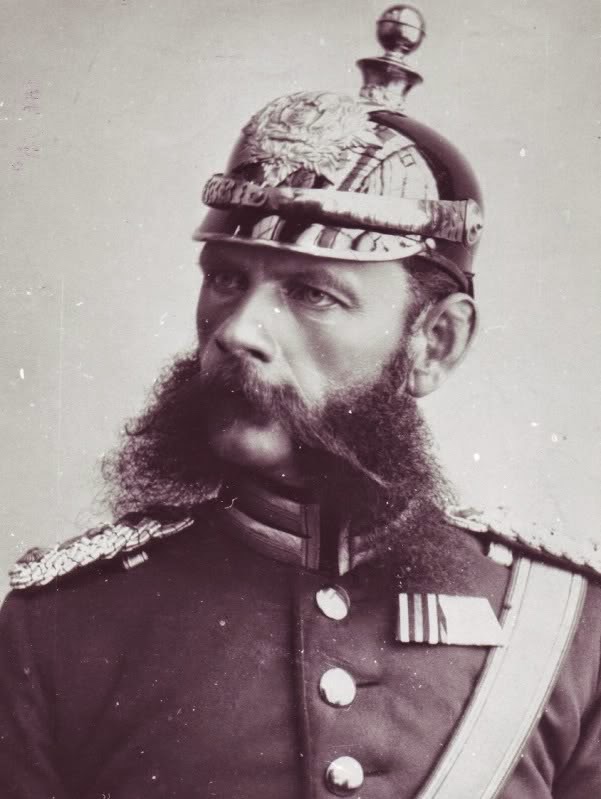 Major FWR Albrecht
ex Prussian Guard Artillery of Berlin
leading the artillery unit of the Boer republic of the Orange Free State
photo credit: Blankwaffen Forum
The 2nd Boer War was a major and very bloody conflict to which Britain and her colonies send 450,000 troops. The 16,500 Australian troops made up over half of the number of troops from participating British colonies. I know quite a lot about the connection between the British, the Australians and the Boers, but nothing about the relationship between the South African Boers and Germany.

By 1884 there were German Imperial colonies in Africa, for example in present day Ghana, Rwanda, Burundi, Kenya, Namibia and Botswana. Perhaps that partially explains why, during the second Boer war, there was great German support for the Boer struggle. As The Soldier’s Burden has shown, the Boers were armed with weapons made by Mauser and Krupp. Major FWR Albrecht, the officer commanding the Orange Free State artillery, was a German army man. And note that the German Freikorps of Volunteers and officers fought on the Boer side.

There was no official monetary aid from the German govern­ment. However Boer emissaries toured Germany during the war, collecting funds for Boer soldiers and later for their widows and orphans. Pro-Boer associations met in bars and meeting halls like The Burenwirt, München. I am assuming they were raising money, as well as raising beer steins. Countless postcards were printed in Germany during the war, both to raise funds for the Boers and to make fun of the British. Many books were published during and after the war; Pro-Boer associat­ions, German volunteer combatants and novelist wanted to publish their version of history in the German language. 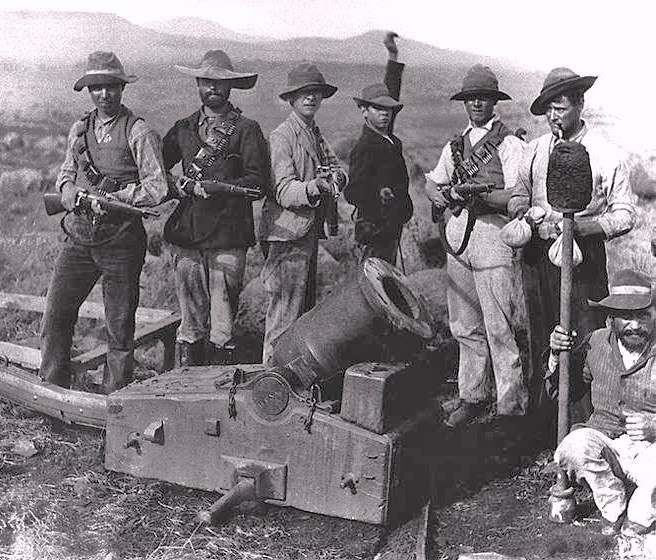 In the latter stages of the war, the Kaiser's support waned as he recognised that alienating the British by supporting a small nation on the tip of Africa was potentially more trouble than it was worth. Nonetheless once the war ended, Boers still chose to flee to German South West Africa to avoid surrendering to the British.

Even if we agree that German support (financial, equipment and volunteers) was vital to the Boer effort, we still have to ask vital questions:

1. How did Australian citizens, going about their daily business in Melbourne or Brisbane, know about semi-secretive German activities on behalf of the Boers? Aus­t­ralian newspaper journalists in South Africa did send back articles that mentioned German soldiers but was that enough to incite anti-German behaviour 10,000 ks away?

2. There was no shortage of Boer supporters in France, Netherlands and Belgium, so why did Australian citizens not seem to develop an antipathy towards these nations and their vast overseas colonies? The nationalistic Transvaal Irish Brigade marched into South Africa to support the Boers and to oppose the British. How did Australians react to Irish immigrants in Australia?

3. Did Australian citizens target all people with German surnames, regardless of how many decades they had been in Australia and whether they were Australian citizens or not? How widespread were the anti-German feelings spread around Australia, particularly in the large communities of German-speakers near Adelaide?

I still wonder about the surviving Boer fighters and their ongoing relationship with Germany. Note that at the outbreak of WW1, only a decade after the Boer War ended, the Germans equipped the Burenfreikorps and supported Manie Maritz when he went into open rebellion to topple South Africa's Union Government. Even in the 1920s and 1930s there was still a strong Boer force waiting for the moment that South Africa would shake off British influence. Certain sections of Boer society were involved in Right wing organisations that were loosely copied from the Freikorps.

It has been said that anti-German sentiment was around for a long time, probably since the unification of the new nation in 1871. So perhaps there was nothing new about the anti German sentiment yiu refer to, except that it had to do with a distant war in an even more distant country.

I understand that a muscular, unified Germany in the centre of Europe must have been frightening for the surrounding nations, especially France. And I imagine that the equally muscular German colonial empire was ringing alarm bells across the colonised world.

But did Australians care about either of these two situations?

Hello Hels, In the U.S., there was much anti-German sentiment starting with WWI, and many people and towns changed their names to avoid discrimination or at least the associations that their names would suggest. An example that comes to mind is that New Berlin, Ohio, home of the Hoover Vacuum Cleaner Company, changed its name to North Canton.
--Jim

Why was anti-German sentiment rife in Australia at the time of the Boer War?

I think that we have to remember that Australia was barely a nation at the time. Most people thought of themselves as British, and references to England as "the old country" were quite common.

The Brits would have been well aware of the succour supplied to the Boers by the Germans, and antipathy towards them would easily have been transported to the colonies.

The Australian Immigration Heritage Centre's history does not even mention the Boer War.

German settlers escaping the rising nationalist sentiment in Germany began arriving in the Australian colonies looking to start a new life. Port Adelaide was the point of arrival for the majority of them. The German Australians maintained strong cultural ties with their German heritage up until World War One by which time over 100,000 German-born Australians lived here.

In 1915, German-born and Austrian-born Australians who were old enough to join the army were put into German Concentration Camps across the continent. Their schools and churches were closed.

Totally understood! Germany and its allies were the sworn enemies during WW1 and any associations with the enemy were to be ended or prevented. But name changes were just symbolic..and harmless. Interment of German-born American citizens was nasty.

The question of newspaper coverage in war time is fascinating. I imagine in all wars, our armed forces had strict censorship rules, both to protect our soldiers and to maintain morale at home.

But if Australians had access to British newspapers, the situation in South Africa would certainly have been explained by a wider source than I might have otherwise expected.

I am guessing that the Breaker Morant and Peter Handcock story was handled very differently by the Australian and British journalists.

Many thanks. I read the reference from the Immigration Heritage Centre and was surprised to find no mention of the Boer War whatsoever. As I said to Parnassus, I find the internment in 1915 of Australian citizens of German origin to be alarming.

By the way, I find our locking away of asylum seekers behind barbed wire camps to be outrageous. We have learned nothing from 1914 to 2014 :(

The Knoll reference was excellent. He doesn't discuss the Boer war but there are still issues that I need to think about and analyse. Many thanks.

Fascinating post Hels! I have a lot of German-speaking and Afrikaans friends in South Africa and they get along fabulously and find it quite easy to converse in a weird amalgamation of the two languages. My Afrikaans best friend is made about German and Germany but I think that is more to do with a certain German rock band than the fact that her great-grandmother was born in a British concentration camp.

Oops. Mad not made. Silly autocorrect.

normally after publishing a piece of history, I think about it for a day then move my thoughts to something else. But this story has haunted my thinking for weeks. Strange really, considering the newspapers, tv programmes and magazines are full of WW1 stories.

The Boer War normally does not capture the public attention in the way that 1914 did. But the two wars were not totally unconnected!

Definitely. I recently listened to the audiobook of Margaret MacMillan's The War That Ended Peace and she spoke of German support for the Boer War and, conversely, of the British slowly losing favour and how it influenced their positions within Europe.

I watched a South African film back in 1984 called Torn Allegiance that told the Boer war from the Boer's perspective. It was great because it touched on the very conservative and religious sensibilities of the Afrikaaners that continue to present day. It really humanised the Boer plight for me and even though I identified as British, I began to understand how there were two sides to the conflict.

Exactly! Actually I always understood the Boer perspective, fighting for their rights in their own country, against a giant imperial army from outside the country.

And now this year the film "Breaker Morant: The Retrial" was released, in an effort to reveal the true story behind the executed Australian soldier Harry Breaker Morant. Many South African elderly citizens were interviewed in the film, the grandchildren of Boer soldiers defeated in the Second Boer War. They were still very unhappy about what happened to their grandfathers.

I hadn't heard of that documentary before Hels but it sounds fascinating.