Aix en Provence’s most famous resident was Paul Cezanne (1839-1906) who was born and died in that city. So I was not surprised when the post “Cezanne and Zola's favourite brasserie ...in Aix” was read by more people in the blogger-sphere than just about any other post I had written. Good food, great wine, a great 20th century artist, sublime weather and Mediterranean scenery to die for – what is there not to love?

I noted that Pablo Picasso bought a chateau on the edge of Aix next to Mont Sainte-Victoire, the exact mountain made famous by his hero Cezanne. But what of all the other early 20th century artists who loved the Côte d’Azur? 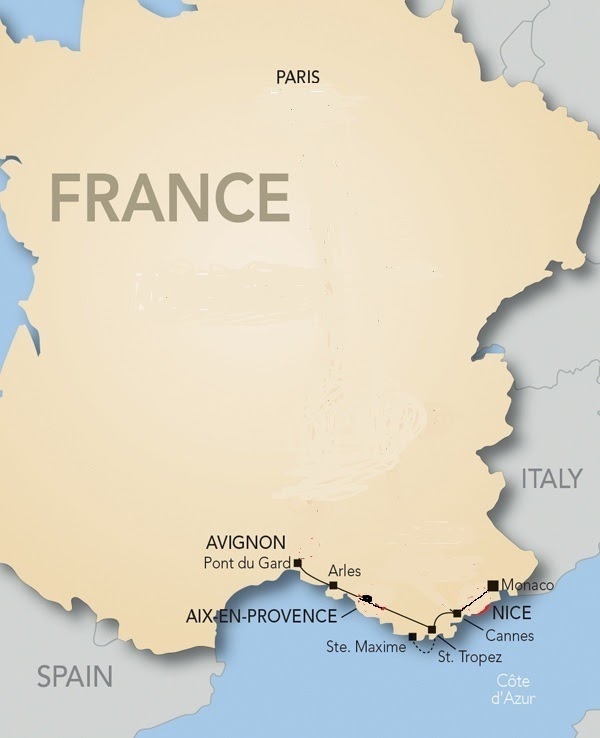 
Tristan Rutherford mentioned some famous and not so famous sites on the Riviera Art Trail: the route that the Surrealist photographer Man Ray followed to Mougins; the mule track Henri Matisse followed to Antibes; Pierre Bonnard loved Cannet; Raoul Dufy and Pierre-Auguste Renoir spent endless time in Cannes’ countryside; Picasso moved permanently to Vallauris in the 1950s; the writer and artist Jean Cocteau favoured Plage Passable in Villefranche-sur-Mer; the painter Paul Signac liked the coves around Saint-Tropez. Chaim Soutine visited his favourite southern coast towns each summer, with memorable landscapes being painted in Cagnes-sur-Mer, next to Nice.

Let me focus on two small towns on this Riviera Art Trail. As an older man Pierre Bonnard (1867-1947) stayed in Le Cannet near Cannes off and on between the wars, renting until 1926 when he finally bought the house called Le Bosquet. This was the house and studio on the Cote d'Azur hills where he retired and remained quietly until his death in 1947, the perfect place for an artist who celebrated Mediterranean light.

Linking Le Bosquet house and the Bonnard Museum are paths that the painter used to walk. The trail is a gateway into the Bonnard world, especially his analysis of the landscape and light of the French south. Today several panoramic views along the trail remind us art buffs about Bonnard’s experiences in landscape art. 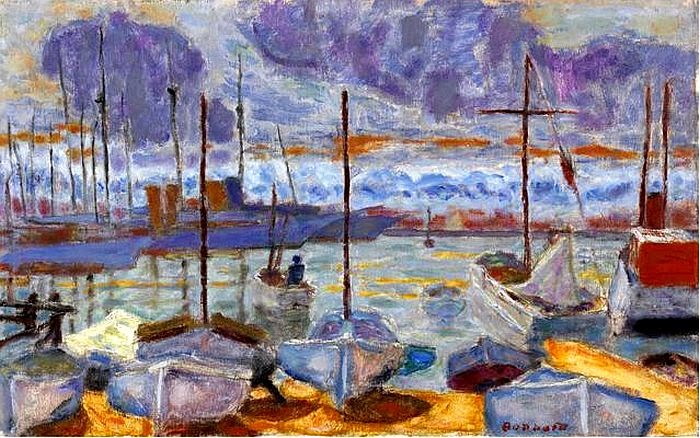 Pierre Bonnard,
The Port of Cannes 1927
Museum of Fine Arts in Montreal
The Pierre Bonnard Museum, which I reviewed when it first opened in June 2011, was the first in the world dedicated to this post-Impressionist master of colour. His sunlit rooms and gardens, filled with his wife Marthe and sundry relatives and friends, shined with intense colour. See, for example, Bonnard’s painting The Port of Cannes 1927 above.

Bonnard Museum's first exhibition starred 40 of his paintings, including Late Impressionist-Nabi landscapes and still-life paintings with textured surfaces. What I did not mention, but Tristan Rutherford did, were the six alfresco plaques showing the artworks that Bonnard painted in situ.

Pablo Picasso (1881–1973) moved permanently to Vallauris, next to the town of Antibes, in the 1950s when he was a mature artist. There he slowly learned the skills of pottery art at the Galerie Madoura. The artist must have been busy – he created 4,000 pieces of ceramics during his life there.

Vallauris was already well known for its ceramics, but Picasso made the industry even more famous. The artist wanted several copies to be produced of his most important pieces, giving Madoura the exclusive production rights. The Ceramics Museum is thus a living reminder of Picasso’s and other ceramic artists’ contrib­ut­ions. 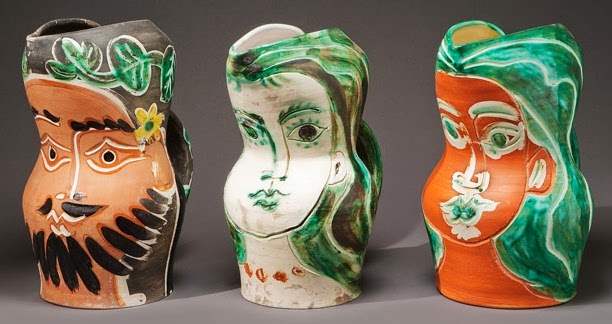 The old Grimaldi family castle in Vallauris was built in the Renaissance style and later converted into the town hall of Antibes. After WW1, the chateau became known as the Grimaldi Museum. Since it was the home of artist Pablo Picasso after WW2, today the castle has been turned into the Picasso Museum, one of the first museums anywhere to be dedicated to Picasso.


Picasso himself donated important works to the museum, especially his paintings The Goat and La Joie de Vivre. Jacqueline Roque married Picasso in Vallauris in March 1961 and she too presented the museum with many important Picasso art objects. Today the museum holds 245 works by Picasso, collected from 1952 on.


On the walls of a ruined Romanesque chapel, in the Castle at Vall­aur­is, lies the Musée National Picasso’s War and Peace. In 1952, Picasso had decided to erect a temple there with his monumental composition. He painted two huge panels, one portraying the horrors of war and one depicting the benefits of peace. Another panel was added at the far end of the chapel to make the link between the two themes 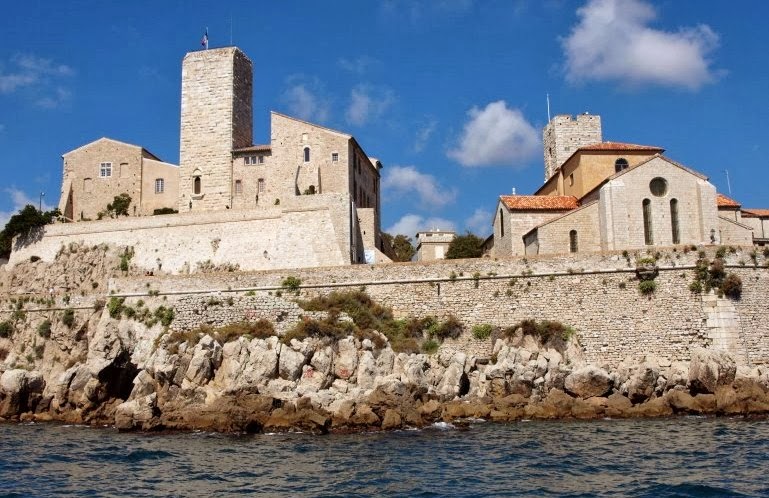 Hello Hels, It is interesting to compare the ideas here to your earlier articles on the refuge artists sought in certain restaurants and cafes. In some ways, these sun-drenched areas inspired French artists similar to the way majestic scenery inspired the Hudson River painters.

I used to have a romantic notion of French, British and German artists huddling in a miserable and cold attic, or sitting in Vienna-Glasgow-Berlin coffee shops all day trying to stay warm.

But that was insane. Artists who went to Spain, the south of France, Italy and North Africa had a much healthier, happier lifestyle. [Not wealthier, necessarily.]

Have a look at the Globe Trekker Special: Art Trails of the Riviera. It might be a nice little preparation for anyone who wants to go on their own art pilgrimage.

Get the best painter Brisbane to convert your home into a dream place.

"The Riviera... presents the traveller with an extraordinary art trail once touched by the greatest artists of the modern era: Paul Cezanne, Pierre-Auguste Renoir, Pablo Picasso, Paul Signac, Pierre Bonnard, Fernand Leger, Marc Chagall. They all made the French Riviera their home... producing some of the master works which changed the face of art as we know it. Presenter Kate Comer seeks out the favoured haunts of these great artists, taking in the sun and peerless blue skies, the rugged mountains and sublime coastline that attracted these iconoclasts to the Riviera, along the way."

you would have to be converting French homes on the Mediterranean, I think.

Loved this post Hels; especially because I've recently put the last touches to a tour I am organizing in that area in June. Myself and two other teachers will be taking a group of 12 students to the area for five days. we'll fly into Nice, rent a small coach and driver, spend two nights in Aix exploring Cezanne and Van Gogh in Arles. Then we spend two nights in Nice from where we'll visit the Picasso Museum, the Bonnard Museum and the Renoir Museum. Our final day will be in Nice exploring the Matisse trail and Museum. I'm looking forward to it and I'll have to share your blog with the students.

your students will love the area because of the warm weather, gorgeous sea and delightful architecture. But mostly I think we cannot understand an artist, writer or musician from his cultural output alone.

We need to know about his living conditions, family life, income stream, mental and physical health, support received (or otherwise) from the cultural Establishment etc.

Hels, reading your post has me yearning to return to the South of France. The light! No wonder the painters loved it. Last time I was staying just out of Cannes I did the trip to the Picasso Museum in Antibes - closed on my previous trip. Loved the ceramics, but was a little disappointed in the rest. The building was something else again, I was totally distracted by it.

re the architecture of the Picasso Museum, let me say just two things:
a. How did it happen that Picasso lived in a chateau? And
b. even if he did, who eventually created the concept of a castle-cum-museum?

You don't have to love all the Picasso art objects, as you say. But the architecture is very special!

Musee Marc Chagall was opened in Nice in 1973, housing the biggest public collection of Chagall's works. The works are organised around 17 paintings inspired by the Old Testament.

Great location! Chagall lived on the Côte d’Azur from 1948 until his death in 1985. And he was buried in nearby Saint Paul de Vence. So Nice is ideal.