European scholars, soldiers, administrators and tourists were flooding into Egypt, Turkey and other exotic count­ries in large numbers during the 19th century. So we can expect that they would want to bring back souvenirs with them to remind them of the amazing col­ours, cultures and tastes they saw there. Orient­al­ism became a Western cultural move­ment, climaxing in the mid-late C19th, and was esp­ecially well represented in paint­ing, sculpture, literature, drama and travel writing.

Orientalist descrip­t­ions of the Middle East and North Africa were not necessarily accurate, even though they were bas­ed on real observ­at­ions of these cultures. It didn’t mat­ter. Peo­ple coming back from Constantinople or Cairo could not possibly have known what the inside of a harem looked like: they simply wanted exot­ic, colour­ful images from their travels. And people who had NOT been travelling to the East wanted images of what they might one day see.

Eugene Delacroix and other French roman­tics drew their sub­ject mat­ter from literature and from actual travels to the Middle East. Delacroix trav­el­led to Morocco and Algeria himself in 1832, and was very taken with the local colour, bright light and dignity of the loc­als. From then on he painted dazzling coloured versions of the places he had visited or imagined: Algerian Women in their Qu­art­ers 1834; Odalesque 1857. Educated Europeans couldn’t get en­ough of the exotic Orient. Return­ing French travell­ers in particular loved Orientalist taste, because presumably it reminded them of France’s past glory days. 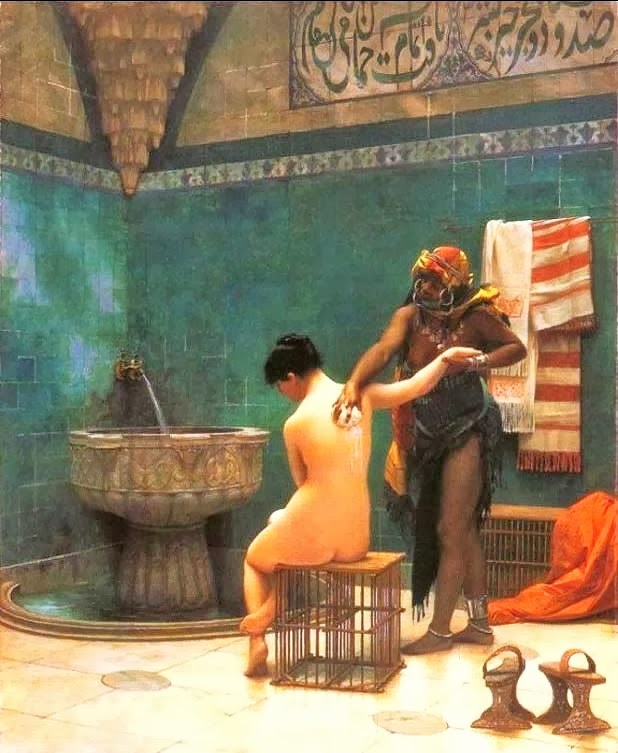 Pictures which represent­ed small genre scenes in the colourful every-day clothing of the Orient were very popular. No-one did im­ag­es from North Africa or the Middle East better than Horace Ver­n­et. His meticulously finished panoramas brought him enormous suc­cess in the Salon and heaps of fans amongst the fashionable art lovers. The Arab Tale Teller 1833 was painted before he vis­ited Algiers in 1837, showing a clear narrative approach that was ext­remely popular. Arabs Travelling in the Desert 1843 came after his trip and was still meticulously remembered.

Jean-Leon Gerome was a pupil of Paul Delaroche and used his mas­ter’s highly finished academic style. Gerome trav­elled widely in Turkey, the Holyland, Egypt and North Africa. His female figures had the same clas­sical precision of Ingres, but were in more realistic poses. His best-known, most popular works were his Or­ien­tal scenes eg The Draught Players 1859. Lat­er in his life Gerome used a camera to supplement his prelim­inary sketches, and his paintings achieved realism AND brilliant light­ing with vivid colours. The Moorish Bath 1870 showed his scrupulous attention to detail.

Old themes could be presented in new contexts - the undraped fem­ale form in harem pictures, hunting scenes with tig­ers and camels instead of horses, domestic inter­iors with highly decorated Moor­ish tiles and screens etc. The Harem Guard by Jean Discart 1885 was magnificent in its de­t­ail and exotic in its subject matter. Mor­oc­can Coffee House by Eugene Girardet c1874 was everything the European tourist want­ed to remember from his travels to the East. Guards of the Harem by Ludwig Deutsch depicted the never ending boredom endured by these colourful men. Vien­nese-born but trained in Paris by Gerome, Deutsch’s themes were primarily ord­inary Orientalist pain­tings. Deutsch made several trips to Egypt in his life and many of his set­tings are from Cairo. The subjects that he painted had little to do with the reality he saw in Cairo; they were fantasies he created for an eager public. 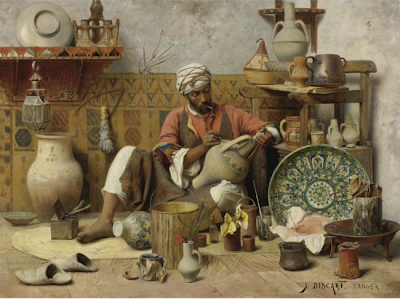 In Britain there was perhaps less excitement about the Or­ient as there was in France. Nonetheless, as the accessibility of the Middle East grew, colonial expansionism by Britain advanced in Egypt etc. There was a passion for all things Egyptian. David Roberts produced popular coll­ect­ions of prints from his travels in the 1830s. Fr­ank Good­all did desert scenes. Lawrence Alma Tadema pain­ted lav­ish Egyptian scenes bef­ore turning to Greece and Rome. Holman Hunt went to Israel and Egypt to paint local colour, and JF Lewis painted harem scenes while living the life of a Turkish nobleman. EJ Poy­nter caused a sensation with his large picture Israel in Egypt in 1867.

In English architecture, there was also an Orientalist fashion, and an ex­cellent example is the Arab Hall in Leighton House. We need al­so mention John Nash's Indian-style Royal Pavilion and the piers in Brighton. The Prince of Wales thoroughly enjoyed the Royal Pav­il­ion at Br­ig­h­­ton which he had refur­bished in Orien­­­tal taste. The once classical villa began to look like an Indian palace, complete with domes, minarets, pin­nacles and pag­od­as. The best rooms are the banqueting room, with its high dome, palm tree, dragon, Indian motifs and golden corrid­or, complete with Chinese porcelain and sculpture. Was the young prince besot­ted with the Indian romance that inspired English literature and art at the time? The architect, John Nash, tied the whole proj­ect to­g­et­her with one long crenellated cornice. And completed it in 1822.

Professor Edward Said (1935–2003) has influenced many art historians’ views since the 1970s. In his definition, Orientalism referred to a par­ticul­ar academic tradition in the West, preoccupied with concept­ualising and representing the non-Western societies as the opposite or Other of the Occident. The emer­gence of Orientalism was not random as it occurred in a particular historical context i.e the global ascendancy of the capitalist, militarised West.

According to this view, Orientalism misrepresented the social-cultural reality of both the East and the West by pres­ent­ing the West as rational, progressive, humane and civilised, and the East as cruel, exploitative and regressive. And by present­ing the pro­­g­ress of the West as a natural consequence of the intrinsic virt­ues of Western culture, it also distorted the historical reality of Western mod­ernity.

European Orientalism therefore served an important ideol­ogical function in the 19th century. It both justified Western exploitation of North Africa and the Middle East, AND it turned colonialism into a noble, historic mission: the West’s her­o­ic attempt to help the Other, the uncivilised, the lazy, the savage Or­ient. The main themes presented in Orient­alist art presumably reflected the colonial imperative: viol­ence, laziness and sex; signs that the Oriental civilisation was on the decline, shown through depiction of crumbling architecture etc. 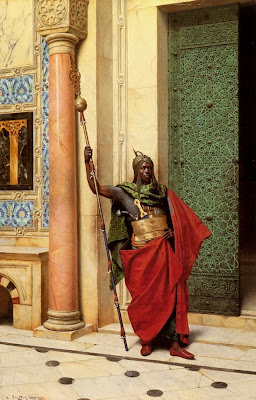 I agree that all cultural productions are self serving – otherwise how would painters, for example, get their paintings sold at home? But I would argue the very opposite of Said's view. Orientalist study of Muslim society arose at least in part from the denial of narrow, religious dogma; rather Orientalism actively encouraged learning about alternative cultures.

And it seems that Orientalist artists truly loved the colours, costumes, architecture, weapons, markets and weather of North Africa. Yes there are slave scenes, but slaving was a product controlled largely by Europeans. We should be impressed more by the focus on Islamic education, warm family relationships, personal hygiene, busy craft markets and other qualities that could have taught the West a lesson or two.

The best Orientalist blog is written by Enzie Shahmiri.

I learned so much from this fascinating subject matter. Even though, I am familiar with the painters you discussed. Thanks for a wonderful post!

when a new style becomes popular, I am sure it affected paintings, literature, architecture, jewellery etc etc. But I must agree that music, ballet and operas, in particular, lent themselves to Orientalism.

I did Gilbert and Sullivan's The Mikado in school in 1963. And who didn't love Richard Strauss' opera, Salome or Giuseppe Verdi's opera Aida? Orientalism gave great music, colourful costumes and sets, and exotic stories.

thank you. I get annoyed when lots of academics state that Orientalist art refers to a patronizing and even denegrating attitude towards Middle Eastern and North African communities by European scholars and artists.

But if North African and Middle Eastern life was so inferior, why did the very best artists in France, Germany, Britain etc want to travel and paint there? Surely not just for the warmer weather! No, they loved the colour, the markets, clothes, architecture and admired the communities.

when we did Orientalist art in lectures, you included early 20th century artists as well. Would you still consider modern artists like Klee as Orientalists?

I certainly would. The taste certainly persisted into the early 20th century, as we can see in Henri Matisse's odalisques and his use of Oriental costumes. He adored travelling to Algeria in 1906 and to Morocco in 1912. Paul Klee and August Macke had the best time ever in Tunisia in 1914.

If anything, the passion actually increased as wealthy travellers went on the Orient Express train from Paris to Istanbul.

Orientalism has certainly left us with some of the most impressive and representative paintings of the 19th century.
It's always a huge pleasure to admire them in the Louvre other galleries.

that is so true. The three paintings I showed in the post were all from the last decades of the 19th century. If I were looking in the Louvre, I would start as early as Ingres' Grande Odalisque 1814. And then never go home to Australia again :)

I would love a mention of the rich collection of art works by Leighton, Millais, Watts etc in the Lord Leighton Museum.

You are quite right. The museum has on permanent display works of art by all our Pre-Raphaelite Brotherhood favourites including those by John Everett Millais, Edward Burne-Jones, Frederick Sandys and George Frederick Watts. And there are more by Leighton himself. I didn't include them in this post simply because the paintings are not Orientalist in style or in content.

Jeanette Hoorn wrote "Hilda Rix Nicholas and Elsie Rix's Moroccan Idyll: Art and Orientalism", (Melbourne University Publishing 2012). Hilda Rix Nicholas's Moroccan oils are fascinating early experiments in the post impressionist technique learned by the Australian artist in the ateliers of Belle Èpoque Paris of Henri Matisse. Together with her sister Elsie, Hilda wrote letters in Tangier in 1912-14 to their mother Elizabeth in London. Jeanette Hoorn draws upon the letters written from Tangier by the Rix sisters to illuminate the artwork and the amazing travel adventures of these two Edwardian women. Adorned with sketches and drawings, the sisters' experiences in North Africa before World War I present a critical reading of Orientalism.