Although the annual Artists' Balls may have started and flourished in Belle Epoque Montmartre in Paris, I eventually came across Sydney’s Artists’ Balls... via a circuitous route. Dulcie Deamer was a published author in Sydney in the 1920s and 1930s. This Queen of Bohemia participated in a very modern world of literature and art, including playing a role in every Artists' Ball in Sydney for 30 years! The skimpy leopard skin costume that she wore to the 1923 Artists' Ball in Sydney was immortalised in the photo below. 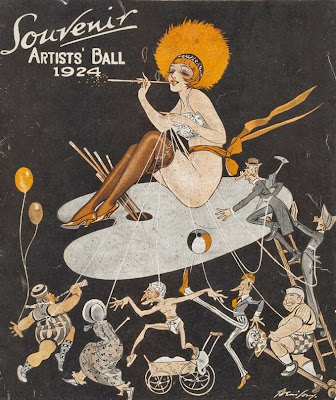 The Sydney Artists' Balls, which started in 1898, were always glamorous, slightly disreputable events, alarming both the church and the police with the participants’ behaviour. Everyone attended in fancy dress costume and the rooms were well decorated with the artists’ works. Deborah Beck (Inside History July-Aug 2013) located the venues for many of the Artists’ Balls: Paddington Town Hall from 1898 until the war; Sydney Town Hall throughout the 1920s; and later the Palais Royale, David Jones Auditorium, Blaxland Galleries and particularly the Trocadero. In every case, the Artists’ Balls were held to raise money for charities and to give the art students, artists, their models and assorted other party-goers an extravagant evening of merriment.

Once WW1 was over, behaviour at the balls was thought by the authorities to be even more problematic. Young men were thrilled to be demob­ilised from the army and young women were becoming ever more independent, socially and financially. Their clothing became skimpier, the music more jazzy and alcohol more easily available. Not surprisingly, the newspapers could not publish the messy details quickly enough, thus reinforcing Sydney’s view of itself as Australia’s capital of the post-war Jazz Age. Even the City Council got involved - apparently there was a very serious discussion amongst those august councillors regarding the unseemliness of some of the costumes worn and the disorderly conduct noted!

Recently I was thrilled to find a mention of the 1920s Artists’ Balls in modern Australian literature. In Death Before Wicket by Kerry Greenwood, amateur sleuth Phryne Fisher had pl­ans for her Sydney sojourn; a few days at the Test cricket, some sight­seeing and the Artist's Ball with an up-and-coming young modern­ist!!

Strange Flowers said that the Chelsea Arts Club in London was founded in 1891 with an explicit mandate to be “Bohemian in character”, a marked contrast to the stuffy private clubs of the era. Among its early members were Whistler, Sargent and Augustus John. In 1910 the first Chelsea Arts Ball was held in the Royal Albert Hall where the  prefabricated Great Floor provided the largest dancing space in the world. London society rose to the occasion: four thousand young people danced the night away. And from then on, until the 1950s, the club threw legendary fancy-dress balls at the Royal Albert Hall every year, to raise funds for artists' charities. 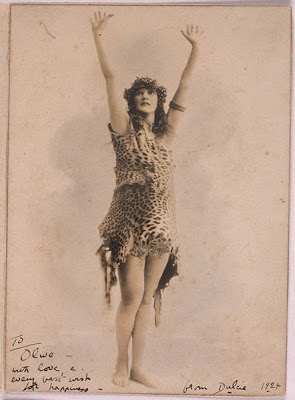 I also found plenty of references to Artists’ Balls in early C20th USA. The Kokoon Arts Club, for example, was founded in 1911 by a group of young Cleve­l­and artists.  The organisation's inspiration was based largely on the bohemian spirit of the Kit Kat Klub in New York, giving members the opportunity to exercise their individual artiness. Members held classes with live models, exhibited their work and the work of others in the club's gallery spaces and went on summer sketching trips.

Cleveland's fledgling Kokoon Arts Club held its first Bal Masque in 1913 in hopes raising money. It would be the first of many. The annual costume ball became a popular, if notorious event that kept the Kokoon Arts Club in the spotlight well into the 1930s. The Bals were publicised using handbills and lavish, often daring, poster art.

The Boston Art Students Association/now the Copley Society of Art was formed to supplement the academic training of the Museum School, to assist their members in their artistic careers, to cultivate a spirit of fraternity among artists, and to promote the interests of art in the city of Boston. But mainly, I suspect, to get dressed up in fancy dress and drink alcohol. The newspapers excitedly reported the original pageants and plays that were put on, and the exciting costumed artists' festivals that were organised to enliven spirits and raise funds.

William McBride, artist and cultural activist, was responsible for the designs of the souvenir books and posters for the annual Chicago Artists and Models Ball. This was their fundraising gala, which quickly became a marquee event. Vivid images remain from the Art Crafts Guild’s 1933 Artist’s Ball, a forerunner to the South Side Community Art Centre’s Artists and Models Ball. 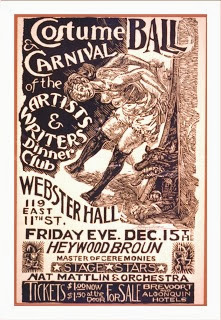 In New Orleans, masked balls and bohemian carnivals were pres­ented by artists who came together in the French Quarter in the 1920s. Led by William Faulkner and Sherwood Ander­s­on, the scene represented the city’s exploding art scene.

Could the excitement of these artists' balls be re-generated in 2013, as people have attempted to do? Of course it could be. But there were at least four aspects of the 1920s and 1930s that were both unique and essential for the balls' success:
-an urgent need to reaffirm young life after the endless slaughters of WW1;
-the excitement of the jazz age;
-the colour and modernity of the Art Deco period; and
-the growing confidence of young women socially and financially.

This era will presumably never come again to Australia. Just as I assume Prohibition, and its attendant speakeasies and gay cocktail parties, will never again return to the USA. 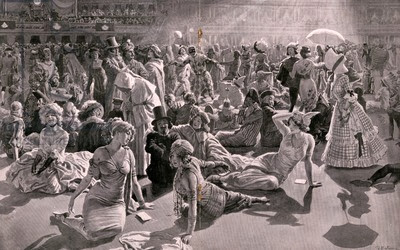 Hello Hels, With your discussions of cultural attainments all over the world, I knew that sooner or later you would get to Cleveland, Ohio! Somewhere in storage, I have a boxful of Cleveland society magazines from the teens and twenties; when they resurface, I will have to see what coverage was given to the Kokoon Club.

I agree with you that those times might not come again, but I think that reviving the Artists' Ball for a party theme would be a great idea.

I would really love to see what you find!

I found newspaper articles relatively easily, but the newspapers alternated between a) shock-horror about the booze and the women's knickers and b) excitement at their city being a world centre for jazz and art.

Proper analyses are more difficult to come by.

Melbourne had its own, abbreviated to Arts Ball. Although I attended at least one, I don't know of its origin and by the late 1980s or early 1990s it was little more than an event for drag queens. I believe in early times it was more as you describe.

Dulcie Deamer's book As It Was In The Beginning (1929) was illustrated by Norman Lindsay. Lindsay was no stranger to naked women and police attention, which might be why they collaborated on this book.

very occasionally you will find references to artists' balls in Melbourne eg "Norman Macgeorge’s reputation as a post-Federation landscapist was established. In 1909 he met May Ina Hepburn, granddaughter of Victorian pioneer Capt John Hepburn, at the Victorian Artists’ Society Ball".

Thank you. Dulcie Deamer certainly seems to have been very comfortable in Norman Lindsay's crowd, so perhaps they planned the book over cocktails one night. It was a risky decision. A number of books that Lindsay illustrated were banned in the late 1920s-early 1930s.

What a fabulous post Hels! I really enjoyed it and definitely think I would have enjoyed the Sydney party scene the most. I've long been fascinated by Art Deco and the swinging 20s. If I could go back in time I'd go there.

There is a scene in London to replicate it somewhat. There is a Prohibition 20s party next weekend and we have loads of Prohibition-era inspired speakeasies too.

*nod* There was something very special about that era, despite the horrors of so many damaged men post-WW1 and the difficulties of the Depression. I think creative people wanted to make the world right again, via literature, art, jazz, cocktails, dances, cabarets, university scholarship, moving to Paris etc.

Of course you should go to the Prohibition 20s party :) even though noone in the UK experienced prohibition, true?

True - the parties certainly have an American look and feel!

Perfect timing...yesterday the students and I were talking about the Art Deco passion for lock-up cocktail cabinets, cocktail shakers, wine coolers, bar stools etc. Even though Prohibition was only in the USA and only between 1920 and 1933, the cocktail industry quickly spread across Europe, Australia etc etc

I'm quite excited actually - next weekend I'm going on an Art Deco guided tour in London. It should be great!

The Textile Blog has a post about Fritz August Breuhaus de Groot and his amazing costume designs for a masked ball. The dates are right (1923-7) so I wonder if he was designing costumes for artists' balls in Germany.

After our discussion today about van Dongen and the costume balls in Montparnasse, I went back and had a look at the Sydney etc Artists' Balls. Very Bohemian.

Yes the Sydney balls have been regenerated, but the times/values have changed totally since my granny was a young adult.

Am I too late? Have a look at The Caravan Club 1934. Open for just a few months in 1934, this lesbian and gay-friendly basement nightclub billed itself as 'London's Greatest Bohemian Rendezvous' with all night gaiety and dancing.

I am doing a TV show and one of our features is the gay scene in Sydney. We had been in touch with the State Library of New South Wales but what with the Pandemic everyone is at home

I am desperately trying to get hold of a high resolution copy of the Artists' Ball at the Sydney Town Hall 21 August 1922. There is a lovely wide shot. Or any other options!

I am on leo.mccrea@tigeraspect.co.uk and would love it if you could help?

I hope the tv show goes very well, especially in a horrible time that we are going through now. Back in 2013 I was impressed with the photos of the Artists' Ball found in dictionaryofsydney - perhaps they can help you now.

Thats great thanks for the tip, best wishes

westernsportscentre said...
This comment has been removed by a blog administrator.
February 06, 2021 11:31 pm