Eva Gonzalès (1849–1883) was born in Paris, the daughter of a cult­iv­ated Spanish writer and a cultivated Belgian musician. Her father, a naturalised Frenchman, ran a home that was buzzing with critics, writers and artists, including the director of the newspaper Siècle.

In 1865, young Eva began her art training. She learned drawing from fashionable portrait painter Charles Chaplin who ran a studio for women, including a young Mary Cassatt. In 1869, Eva met Edouard Manet (1832-83) and became his model and his only formal student. Manet apparently knew he wanted to paint a portrait of her at once. 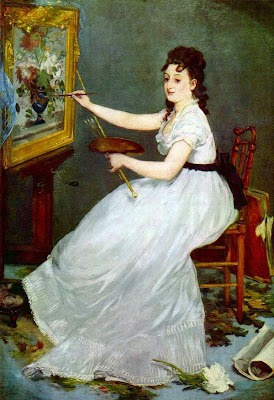 Manet’s Portrait of Eva Gonzalès 1870 was shown at the Salon that same year. She was no dilettante woman, filling in time before marr­iage; rather Manet depicted her as a professional artist, working at her easel.

Edouard Manet never exhibited with the Impressionist painters in their fringy exhibitions in Paris, and encouraged his pupil to remain loyal to the official system as well. So after 1870, she submitted work every year to the Salon. In those early years she was still strongly influenced by Manet and her lovely watercolours achieved great success. And she modelled frequently for other Impressionist artists.


Gonzalès loved painting images of modern Paris - theatre goers, music fans and young women relaxing outdoors. Fortunately the art critics at Salon Exhibit­ions preferred these more genteel pieces and did not consider her a radical. But her work was really only stoutly defended by the few critics who were supportive of all the Impressionists, including my old friend Emile Zola. 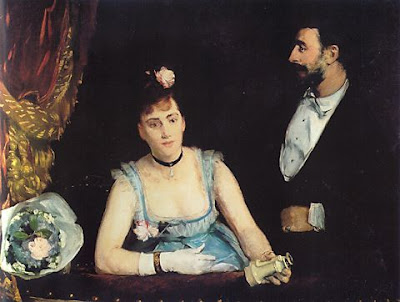 In 1879 she married the engraver Henri Guerard, and used him and her sister Jeanne Gonzales as her models. Her work was exhibited at the offices of the art review L'Art in 1882 and at the Galerie Georges Petit, Paris in 1883. Life was becoming successful.

Then tragedy stuck. Gonzales died unexpectedly in childbirth at 34, immediately following the death of her teacher, Manet. Just two years later, in 1885, a retrospective of 88 of her works was held at the premises of the illustrated weekly mag­az­ine, La Vie Moderne in Paris.

Has Gonzalès’ work stood the test of time? A 1993 exhibition at the Musée Marmottan in Paris' 16th arrondissement suggested her work could at last be considered equal in talent to her two better known contemporaries, Berthe Morisot and Mary Cassatt. We should note again that all three women were born at the same time (in the 1840s), all were upper-middle-class and all were exposed to the same amount of Impressionist support and critical attack.

Gonzales’ The Italian Music Hall Box, Cassatt’s At the Opera and Renoir’s Le Loge and The First Outing all dealt with the same theme. If I had to choose, I think I would prefer Gonzales' version. Cassatt and Renoir painted young women, agog at the excitement of the crowd and the performance. Gonzales' model was older, calmer, an equal of her male escort.

The catalogue raisonné of her works lists 124 works, of which a number are known only from photographs taken at the exhibition following her death. Of the works listed, 89 were oil paintings, 22 were pastels and 5 were watercolours. Spaightwood galleries said that with attention now paid to women artists no longer required to be genteel, her work is highly desired. But I think she WAS genteel. And the money suggests she IS desirable. One of her small watercolour portraits of her sister, La femme en rose Jeanne Gonzales (1879) sold at Christie's Paris auctions in March 2007 for USA $585,000. Good money, I think.

References:  Edward Lucie-Smith’s Impressionist Women (London 1989) and Nancy Heller’s Women Artists (London 1997) are useful reading. They published some of Gonzales’ works and they located her in Paris’ Impressionist world of the 1870s and early 1880s.

Why did Manet not have any other students?

While Berlin in in the early thirties is my preferred place to go back to, should I ever have the choice, an artistic person who was comfortably off in Paris in the mid to late 1800s would not be so bad.

Hello Hels, Of the two pictures you show, the attractive Music Hall one reveals Gonzales to be a high-caliber artist worthy of collection and study. But the Manet portrait of her is fantastic, infinitely appealing, and illustrates the line between good and great.

artists fulfilled roles other than painting, presumably because they needed an income flow to feed their families. If an artist had money from home (his parents), or if he could sell his paintings for decent money, there would be no need for extra jobs like teaching. Manet's parents, bless them, had plenty of money.

Goodonya! I often think that I was born too late.. that I really belong in another country in a different era.

My favourite period would be the Edwardian. Women already had the vote in NZ and Australia and were enjoying better lives in other countries; science and education were booming; peace ruled; and clothes became sensible and comfortable.

sometimes I think that Manet was underestimated and that Monet, Pissarro and their colleagues were overestimated.

Not only was Manet a great artist in his own right. He also hosted a group of artists that met each week at Café Guerbois. This sort of mentoring, discussing their artistic style and techniques, was critical to the success of Impressionism.

It was a fairly amazing period altogether, wasn't it? Like Andrew, I would have happily lived in Belle Epoque Paris.

There are always heroic women in the background of any prominent man. Manet did 5 years intense apprenticeship training.
April 27th in Melbourne there was a theatre screening of a documentary of all the Manet portraits gathered at The Royal Academy. I had not realised how many times he put a cat in the picture.
Seeing a familiar painting fill a 10-metre movie screen was thrilling, and the film makers went round the closed gallery focussing on every painting and all the photographs he took. It was better than actually going there.
Yesterday with another MelBlogger I saw the Monets at the NGV and it was wonderful too. The final room was round with couches for viewing the all-around film of the house and garden at Giverny. Magic paintings, show worth the money.

I am so glad you saw the documentary on all the Manet portraits that are at the Royal Academy. Sometimes Melbourne is too far away to get there and often times the collection doesn't come to our gallery. In the end, I largely rely on the second or third best option i.e buying the exhibition catalogue and its scholarly articles.

Re the fact that there were always heroic women behind or beside prominent men...grrrrr. I think Mary Cassatt got away with a career by not marrying and having children. And Berthe Morisot was successful because all her images were domestic, limited to house interiors and traditional.

Edouard Manet and Eva Gonzalès were not only talented in their own right. But they both chose to live in Paris at a really exhilarating time. We were born in the wrong generation!!

yep yep- male 'modernes' aspired to Manet, while Eva had no 'declared' followers (except of fine impasto technique applied to skin, refined from Manet's broader aggregate of component colours eg 1st work together 'Une Femme', and Eva's retro exhibition 1885 inspiring Sourat and Signac's new 'pointillism'). I have a portrait inscribed 'Thousandth Look_' (Mille Vue_') according to the artist, made in or immediately after Feb 1879, from one, dedicated to the other. Pls email or txt me instructions to send an image- think you may 'melt' into that precious romantic history. xjam