The Catalonian town of Girona is 103km north east of Barcelona, quite close to the French border. Although Girona now has a population of 100,000 people, its medieval antecedent was much smaller (10,000 people in the C15th, of which 1,000 were Jews).


The site of the Girona Cathedral had been used by the Moors as a mosque since 717 AD, so it was only after their final expulsion that the building was entirely remodelled. Although visitors have to walk up c100 steep, hot and sweaty 17th century steps to reach the front, it is worth the climb. The renovated cathedral is an excellent example of Spanish Gothic architecture. Its 22 ms-wide interior is the second widest Gothic nave in the world, after St Peter's in Rome. Girona may have been a smallish city, but money was thrown at amazing stained glass work, and at marble for tombs of saints and church leaders. 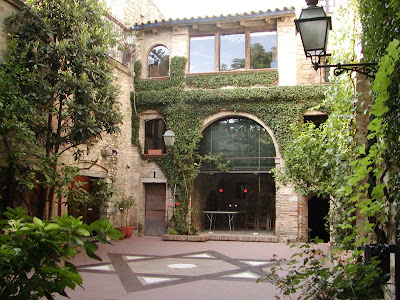 Courtyard of the Jewish Museum, Girona

Among the streets of the Jewish Quarter, the fit visitor can find his way among the narrow, labyrinthine lanes with stone steps. They give access to an old synag­ogue and the splendid Jewish home of the last patriarch of the Girona aljama, the kabbalist Rabbi Moshe Ben Nachman (1194–1270). The home of Rabbi Ben Nachman today is the site of the Bonastruc ça Porta Centre which was renovated and reopened in 1975 as the Museum of Jewish History.

After the appalling massacre of 1391, is not clear to me why a community would have wanted to rebuild. But rebuild they did. In 1415 the king ordered that the synagogue in Calle San Lorenzo, and the adjoining mikveh/Jewish public bath, should be given back to the surviving com­munity. In the long run, it didn’t help. 1442 the area of the Jewish quarter was reduced. In 1486 the Jews were prohibited from owning shops with windows and doors facing the main street. With the final 1492 expulsion order came for the Jews from Spain, the Girona community had dwindled away. 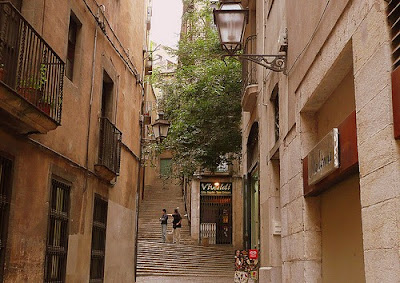 Lanes of the medieval Jewish quarter

The objects and images in the Museum of Jewish History are very well curated. Festivals, traditions and life styles were covered nicely, but I was personally more interested in Spanish cultural history, conversions and co-existence with the Christian majority. One room, for example, examines the hardship inflicted upon those who were persecuted at home or forced into exile. Another room has copies of the documents of expulsion. This part of the museum is all very chilling.

During August concerts are held in the museum courtyard, offering a fine musical treat for visitors. Guided tours are available in the northern summer, but note that the museum is closed every Sunday afternoon. Although I haven’t been there at dusk, the silhouettes of Girona’s Jewish Quarter is said to create a strong sense of mystery, struggle and history.

I would have liked to have seen the scattered sites of Girona’s medieval Jewish homes and community facilities, not just be shown artefacts INSIDE the museum. Of course not much remains since 1492. However on the north side of the old city is the Montjuïc/Hill of the Jews, where the Jews had their religious cemetery. A collection of med­ieval tombstones from the Jewish cemetery survived and was tran­s­fer­red to the Jewish Museum. And in the gardens of the Caserna dels Alemanys in the highest part of the city, the ruins of the Gir­on­ella Tower still stand. This was where those Jews who fled the appalling massacre of 1391 sheltered. Finally clearing away nearly 700 years of construction, one builder discovered the remains of the town’s med­ieval yeshiva/rabbinic college founded by Rabbi Moshe Ben Nachman. 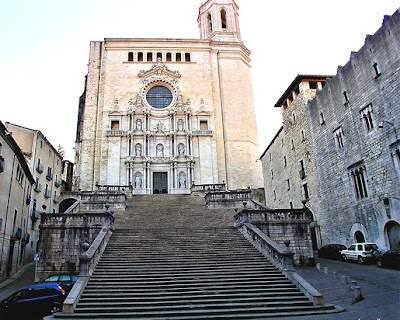 Steps leading up to Girona's cathedral

I believe public baths for the Jewish community still survive, but there were no visible signs. No sign pointed out where the Jewish hospital, library, book binders or meat market had been, nor did I see where the medieval hostel for travelling family members or people on business once stood.

One place well worth seeing is located on the site of a former Capuchin convent. The City History Museum reserves a special corner of the long history of the city of Girona for the Jewish people. A visit to the exhibition rooms shows visitors the Roman Circus Mosaic, amongst other fascinating exhibits. The area was the home, for at least six centuries, to an educated Jewish community. 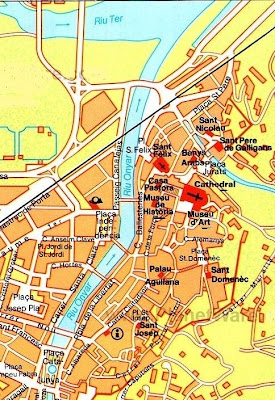 Map of Girona by Planetware.
Note how the museums cluster around Calle de la Forca and the cathedral.

It is ironic that the same Isabella that helped launch Columbus was also complicit in the horrors of the Spanish Inquisition. For this reason I have always had an aversion to monuments and other memorials to Isabella. Many of these cropped up around the 1893 Columbian Exposition, which celebrated the 400th anniversary of the discovery of America. There was even a Queen Isabella commemorative quarter.
--Road to Parnassus

I've been close to Barcelona and also Girona, but not quite there.

Looking at your photos makes me want to see Girona.

On my bucket list for my next visit to Europe!

Queen Isabella originally blamed King Ferdinand for the prosecution and expulsion of the Jews, then she blamed the Archbishops. But in the end, she proudly signed every document in her own name.

I would argue that being the proud patron of Columbus' ships came from the same passion ....for muscular Christianity.

You wouldn't take the train from Barcelona to Girona, unless you were specifically interested in the medieval history of the town. The narrow lanes, tiny shops, steep steps and building walls flush against the lanes ...are still very revealing. The cathedral, historical museums and galleries are wonderful.

Converting to Christianity did not offer much safety to Iberian Jews; it just put them under the jurisdiction of the Inquisition, where they could be tortured and burned alive as crypto-Jewish heretics.
I'm guessing they were better off under the Moors.

A terrific capture! Am loving the lanes.

Good point. I agree with everything you say about conversion and the Inquisition.

But the Moors had been pushed to the south of the Iberian Peninsular hundreds of years earlier. I doubt if any C15th Jews in Barcelona or Girona had ever seen a Muslim, or any relic of Islamic civilisation.

Girona is a photographer's paradise.

Hi Hels. I meant they were probably better of in earlier times before the reconquest.
Some of the expelled Jews ended up in North Africa, suggesting that Islamic rulers at that time were more tolerant of minorites, though I'm sure it was not always the case, then as now.
I am really enjoying your blog by the way.

Agreed. Jewish life in Spain had its golden age under the Muslims because of exactly the tolerance you describe. As long as Jews (and all other non-Muslims) paid their annual punitive tax, they could pray how they liked, run their own schools and courts, practise medicine/philosophy/astronomy etc etc.

Fascinating post, as always Hels. I was quite surprised by how difficult it was for me to read it. I've read a lot about the Holocaust, about entire towns in Poland that were cleansed of Jews. And I care about that, I care enough to keep reading and sharing and telling people about the Holocaust. But reading this was hard because it occurred to me that this is my history. Those Jews that escaped Spain in 1492 were my ancestors, we are Sephardi Jews. Suddenly the horrors of the Holocaust cast a really real sheen on the brutal expulsion of the Jews from Spain, something I hadn't thought about on an emotional level before, something that hadn't seemed real to me. I guess it is time for me to confront this part of my history on a deeper level.

One of the more bitter ironies in history is that when the Spanish started to conquer Northern Morocco in the 19th century they were welcomed there by great Sephardic communities in a medieval Spanish. The Sephardi Jews still considered themselves as a kind of Spanish.

But another thing, if you are passing once again through Barcelona and your surely tight diary leaves you some time you can make a post so we can pass a little around because I'm living there.

I hear you absolutely. Joe and I are both Ashkenazim, PLUS we were born straight after the Holocaust ended. So we are very familiar with every detail of life in Eastern Europe before and during the 1939-45 war.

But Spain was different. Walking through Girona and other long-disappeared communities, you get the sense of how integrated and how successful these people were in culture, the professions and business. Their loss was staggering.

in a heartbeat :) It is a beautiful city!

Re the Sephardi Jews still thinking of themselves as Spanish-ish, it is not surprising. The hundreds of years leading up to 1492 were the most productive, peaceful and culturally enriched generations of Jewish existence in history. Everyone wanted to be Spanish.