Paris' Hotel Lutetia, built in 1910, is now over 100 years old. From the first details of the 1907 commission, the facade was supposed to set the tone and reflect the hotel’s prestigious character. Note the elaborate sculpture created by Léon Binet and the stained glass windows. Slightly decadent, to be sure, and very Belle Epoque.

This ornate building is located on 45 Blv Raspail in the 6th Arrondissement. Undoubtedly pre-World War One visitors would have loved the Saint-Germain-des-Pres district, the River Seine, Musee d'Orsay, Notre Dame Cathedral and the Eiffel Tower. In fact 1910 was the very year that the hotel's neighbour, Le Bon Marche department store, began selling classy fashions to those who could afford them. 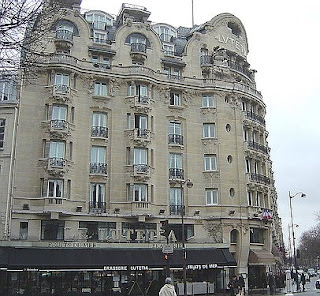 In its own historical documents, the hotel records that the famous brasseries and cafés of Saint-Germain-des-Prés, such as Le Procope, Le Lipp, Café de Flore and Les Deux Magots, became a melting pot of intellectual debate. Café society started in the late C19th and continued to blossom in the C20th. This Left Bank area become the centre for Bohemian literary, musical and artistic types, including Jean Paul Sartre and Simone de Beauvoir. Dancer Josephine Baker, who moved to Paris in 1925 to perform at the Théâtre des Champs-Élysées, made Hotel Lutetia her second home. Picasso painted Guernica in his atelier in Rue des Grands Augustins. Baldaccini César's sculpture of Gustave Eiffel was added to the hotel interior, to stress the connection between the hotel and its Saint-Germain-des-Prés artiness.

Eventually the good times came to an end in Paris. The French government evacuated Paris in June 1940 and Hotel Lutetia was one of the hotels requisitioned by the Gestapo during Germany's occupation of the city. Hotel Lutetia was not the only famous hotel taken over by the German forces - Hotel Meurice on the Right Bank, for example, was the site allocated to the German military. I am not familiar with this murky part of the Lutetia’s history, so I recommend you read Quazen. After Paris was liberated, the Lutetia clearly had a more optimistic and helpful role to play; it became a centre for family searches and reunions. 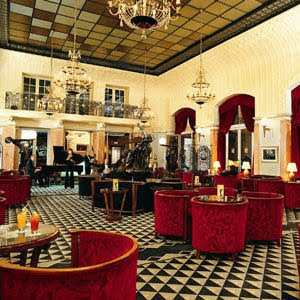 Eventually the Lutetia returned to its real role in history as a splendid hotel.

In the late 1980s, designer Sonia Rykiel opened a boutique in the building, and supervised a major redesign of the interior, restoring the splendid Art Deco of earlier decades. Athletic, naked Deco women in bronze hold up lamps; the Lalique crystal chandeliers are classy; and plush red velvet furniture looks intimate. Hundreds of art objects were placed throughout the hotel’s public spaces and 231 rooms.  And like the Radisson Blu Le Dokhan’s Hotel in Paris, cabinets displaying Louis Vuitton accessories are placed alongside the reception desk.

The centenary celebrations in 2010 were very colourful! Now only one question remains. The hotel was opened for business in 1910 and Art Deco was not popular until 1925 and throughout the 1930s. So what did the interior of Hotel Lutetia really look like, in its original state?
Posted by Hels at 19.6.12

Hello Helen:
An interesting final question! The Hotel Lutetia bears a strong resemblance in many ways to the Ritz in London, most likely dating from around the same time.

Here on the Danube front there were, until the end of the Second World War, a number of very similar establishments but which were, alas, all pulled down on the grounds that bomb damage had made them unsafe and irreparable. This last we doubt very much.

*agreed*... Less of the unsafe and irreparable and more of the profitable, I would imagine.

You are spot on with the comparison between London's Ritz Hotel (1905) and Paris' Lutetia (1910). Note how absolutely French the Ritz exterior looks!

I think we first heard the quote in Paris, that the right bank makes the money and the left bank squanders it.

of course I realise that part of it is pure snobbery. The Left Bank generally refers to the Paris of the 1880-1930 era and so the modern tourist is unlikely to bump into Pablo Picasso or Jean-Paul Sartre having drinkies.

But that sense of bohemianism and cultural excitement makes it still a great area.

I think there was a connection between Le Bon Marche and the Hotel Lutetia, other than being neighbours.

Paris Tourism wrote: "It was the owner of the Bon Marché who took the initiative in 1910 to build the Hotel Lutetia in Saint-Germain-des-Prés. In fact, this luxury hotel was used to house major customers of the store in a made-to-order luxury setting."

This sounds amazing to me. Imagine building a classy hotel for shoppers at even the most chic of the major Paris department stores.

Is it true that Hotel Lutetia took its name from before Paris was called Paris?
I believe this may have been before the Roman's occupied the area.

I love it when historically minded bloggers find important data.

Roman Lutetia was founded in the 2nd century AD next to the river Seine, centred on the left bank of the Seine (modern-day Latin Quarter).

Thank you. What a perfect name for the new hotel!

it is amazing, isn't it? I have been to Paris many times, and never stopped to think whether a hotel's renovated decor matched the original designer's plan.. or what happened terrible things happened to a hotel during WW2.

Wow, your last question really is interesting! I have long been fascinated by cafe culture and can only imagine how wonderful it would have been to share a table or corner with Sartre or Picasso. When I visited New York, I visited an exhibition on the resistance in France and it included some of Sartre's original works. It was amazing to see his original scratchy, crooked handwriting.

oh I fully agree....there is something very special for historically minded people to absorb themselves in a particular place that was famous from earlier eras. Wine and coffee cultures to be sure, and Jardin du Luxembourg, Saint-Germain-des-Prés church etc etc.

fantastic post and Thanks for sharing this info. It's very helpful.
b&b in jaipur

There is something very special about a glamorous, historical hotel, don't you think? Even if ordinary families could not afford to stay there, wandering through the lounge for afternoon tea or drinks would be special.

Thanks for great information you write it very clean. I am very lucky to get this tips from you

The info you described sounds great. Did you provide any discount if we make booking 3 months before visiting.
Mount Tamborine Accommodation

thank you. The hotel was very Belle Epoque and might have stayed that way. But the Art Deco design by Sonia Rykiel, added many decades later, look impressive :)