Arthur Conan Doyle (1859–1930) was obsessed from childhood with the spiritual world. Despite being educated in the rational sciences, his Scottish-Irish heritage gave him a sense of the spiritual, bordering on the superstitious. He attended his first séance at age 20 when he was studying medicine, and not yet thinking of writing fiction.

From 1876-81, Conan Doyle studied medicine at arguably the best medical school in the country - Edinburgh Uni. He practised medicine from the time of his graduation until after he returned from the Boer War in 1900.

Conan Doyle, at first, seemed only interested in Spiritualism for its narrative potential, rather than to change people’s hearts and minds. But after his father died when the author was young, quickly followed by his wife, Conan Doyle fell into a deep depression. Shortly thereafter, in 1893, he applied to join the Society for Psychical Research, a committee of academics aiming to study Spiritualism.

Eventually he gave up his lucrative literary career and dedicated himself wholly to his obsession with Spiritualism with. If anything, Conan Doyle's interest in the paranormal was even MORE intensified after the death of his brother and eldest son in World War I.

Erich Weiss better known as Harry Houdini (1874–1926) was born in Hungary but largely educated in the USA. Houdini was also fascinated by illusion and magic, especially the talent for escapology. In 1904 he toured across Great Britain, the Netherlands, Germany, France and Russia, eventually returning to the USA as a wealthy man. Life was good, allowing Houdini to remain the highest-paid performer in American vaudeville for many years.

In 1920, Houdini was touring Britain, performing scary stunts like climbing out of locked trunks and straitjackets. Or scarier still, breaking out of police lock ups in every city in which Houdini performed. Although Doyle was utterly famous himself, he was besotted with Houdini, going to Portsmouth to see his slightly younger fellow spiritualist. After the show, Doyle couldn’t wait to introduce himself to the magician backstage; apparently the very tall English writer and the very short Hungarian-American magician were happy spending quality time with each other. And their closeness, conducted mainly in letters, continued when Doyle to America to lecture on spiritualism.

Enter Christopher Sandford who wrote a book about these two important men called Masters of Mystery: The Strange Friendship of Arthur Conan Doyle and Harry Houdini, published by Bloomsbury in 2011.

Houdini was not ashamed of his fellow mediums; they had to entertain the crowds and earn a living, just as he had to. But he never for a moment thought the magic was anything more than a stage show. Alas Conan Doyle had a lifetime of believing in fairies and séances, and would not be budged from his faith in these skills.

Why did Houdini acquiesce to Lady Conan Doyle when she suggested that they have a séance? Sandford showed that they were going to contact Houdini’s beloved deceased mother, Mrs Cecelia Weiss; although he knew it was nonsense, Houdini didn’t have the heart to say no. Lady Conan Doyle, in a kind of trance, called for a message from Mother Weiss and wrote the words down on paper, in perfect English. Sir Arthur thought the event a great success but Houdini knew that he had never spoken to his mama in English! When the very religious rabbi’s wife, Mrs Weiss, apparently made the sign of the cross, the game was up.

Houdini was apparently unable to convince Conan Doyle that his feats were simply illusions and tricks. As an experienced magician, Houdini knew all the tricks that his fellow magicians used. But the question remains – why did Houdini spend what was left of his life, rubbishing séances, travelling the world and exposing the trickery? After all, he had himself become both wealthy and famous, using the tricks of the trade! So this was a very strange friendship, and one that was doomed to fail. 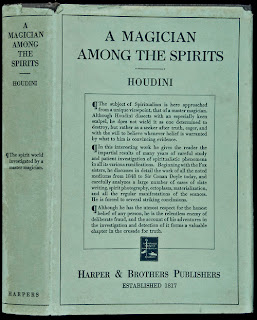 Houdini's book, A Magician Among the Spirits, 1924
Note the mention of Conan Doyle on the book cover.

The knife in the back, as far as Doyle was concerned, happened when Houdini chronicled the profession’s trickery in his book, A Magician Among the Spirits, published in 1924. Doyle, who had become an even firmer believer in spiritualism during his later years than he had been earlier, was very angry at Houdini's exposés. Houdini’s book led inevitably to the end of any trust between them.

Doyle’s own explanation was truly bizarre. He felt that Houdini was SUCH a powerful spiritualist that he must have been using his magic to block the magic of other magicians that Houdini had rubbished in his book. Even after Houdini died in 1926, Doyle published more proof about the truth of spiritualism in The Edge of The Unknown 1930.

So in the end, there were two ironies. Firstly Houdini knew he and his fellow performers had to maintain their spiritual aura, if they were to continue to take advantage of a gullible public. Secondly Doyle had to be a rational and sceptical scientist, but he was so invested in spiritualism that he couldn’t afford to accept the truth from an expert. Although Doyle recognised that some spiritualists might be fraudulent, he believed Houdini's attitude was unfair and irrational, and his condemnation of spiritualism was sacrilegious. 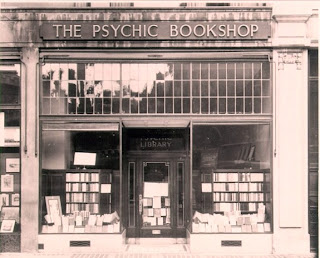 When Sir Arthur Conan Doyle died in 1930, a very large crowd attended the funeral and train loads of floral tributes were sent from across Britain and from other countries. It was a celebratory and colourful occasion, and he was buried in the non-Christian section of the cemetery. His readers either didn't know about his involvement in spiritualism, or they did but they didn't care.

I think you nailed it. The doctor had to be a rational and sceptical scientist, but he was so invested in spiritualism that he couldn’t afford to see the truth, even when it became obvious to everyone else.

It is like dedicated members of a cult. When the leader is taken off to prison, the followers are no less committed, but they flounder like fish out of water.

Irony indeed and it makes no sense to me. Perhaps the modern equivalent to Doyle are climate change denying scientists. Houdini was successful and maybe just wanted no one to follow him who might have been better.

Hello Hels:
What an extraordinary association/friendship between two obviously very different people. We have never taken much of an interest in either Conan Doyle, apart from reading 'The Hound of the Baskervilles' many years ago, or Houdini about whom, apart from the obvious, we know very little. This is all something of a revelation and has certainly aroused our interest.

most people who leave their profession (medicine, accountancy, engineering or whatever) to take up something less reliable (like art, literature, music) disappoint their mothers. Doyle's mother was indeed disappointed. And Doyle was in any case a depressive.

But it wasn't until the terrible deaths of his brother and eldest son in World War I that he began to flounder so seriously.

I can never quite get to the bottom of this story. It is like capturing jelly in our hands.. it just oozes out of our control.

Houdini was _hugely_ successful, and wowed audiences all around the world. Australia couldn't get enough of him in 1910! But he knew that he was just an entertainer, not someone with psychic powers.

Nonetheless these two unlikely characters were major figures in their era, known across the entire European world. How strange it all was... and how sad.

Interesting how people spin things to account for what they believe - e.g.. Houdini must have used his magic to quash others' magic!

After the war, Conan Doyle heard of some photographs which "proved" the existence of fairies. Conan Doyle sent a friend to investigate the photos which showed very small female figures with fairy-like wings. The photos had been taken in mid 1917 in Cottingley (Yorkshire).

Conan Doyle believed that the Cottingley fairies were real, despite the photos being proved fakes by professional photographers. Yet Doyle went ahead published an article about the authentic fairies in the Christmas 1920 issue of the Strand Magazine anyhow. http://tinyurl.com/89ldc2p

There is no limit to spinning, apparently.

The dangers of assumption!

I *assumed* that Doyle, the doctor and author of detective stories, would have been wedded to scientific data and evidence based criteria; whilst Houdini, whose formal schooling was curtailed, would have been more likely to succumb to spiritualism.

I was thinking about why might you have made such assumptions. Because Conan Doyle was a doctor? Partially, yes.

But look at his novels. Having created the character of Sherlock Holmes based on one of his medical professors, Dr Arthur Conan Doyle explicitly gave Holmes the didactic qualities of the most modern and rational medical diagnostician.

Holmes' brain functioned like a well-tuned muscle; he perfected his deductive reasoning skills through logic, analysis and critical thinking.

As an author, Conan Doyle positively _celebrated_ the rational and the analytic!

Hard to add much as so well presented.

covers the same ground but with large reproductions of the fairies - which look pretty fake to me + a great Punch cartoon on Doyle.

On December 3, 1925, at approximately 7:53pm, Houdini gave a radio address via station WTIC in Hartford, CT. In this address he spelled out his exact position on Spiritualism and issued his famous challenge for proof of authentic psychic phenomena or any "weird power" not explainable by science (thereby expanding his challenge somewhat).

Houdini felt this statement was important enough that he signed each page of his typewritten speech and had it witnessed and time stamped by a WTIC representative.

I wish I knew that about Houdini's radio address. Not that I would have added it to the post, but I would have been more confident about the openness of his position on spiritualism. It is one thing telling one's wife and closest friends that psychic powers are just a stage show; it is another thing telling the entire radio-listening public.

Houdini was a great bloke. What a shame he barely made it to 50.

Poor Doyle... I can only imagine the depths of his black psychological state that made him turn to spiritualism for consolation. And with some of the professional mediums around (who are experts at psychology!) it is no surprise that he fell victim to their ploys. I suppose it then became a matter of honour to defend his position, science or no science.

There is a 1997 film about the Cottingley Fairies: "Fairy Tale - A true Story" in which Harvey Keitel plays Houdini and Peter O'Toole plays Doyle.
http://www.imdb.com/title/tt0119095/

I have never heard of the film, but it will be fascinating to see it now, with a new perspective.

I wonder if the viewer becomes aware of Doyle's matter of honour to defend his position, even when it clearly becomes untenable.

Is a cop out and certainly not true. Joe Cooper discusses it at length in his book. The film has little fairies flying round and treats Houdini badly for his 'scepticism'.

why would a modern film treat Houdini badly for his scepticism.. when Houdini was so clearly correct? Did a Doyle-fan write the script?

The Confabulist (Steven Galloway, 2014) is a newly released novel that weaves together the life, loves and murder of the world's greatest magician, Harry Houdini, with the story of the man who killed him: Martin Strauss. He was an everyday man whose fate was tied to the magician's in unforeseen ways. A cast of memorable characters spins around Houdini's celebrity-driven life: from the Romanov family soon to be assassinated, to Sir Arthur Conan Doyle and the powerful heads of Scotland Yard. Ditto the Spiritualists who would use whoever they could to establish their religion.

Thank you. Is the novel in Australian bookshops yet?