By 1914 a quarter of all British women were already in paid jobs. Yet it was only during WW1 British women were called on, by necessity, to do more work and to take on newer roles that were beyond traditional community expectations. Once the men left home and the family received only the breadwinner’s poor army pay, most women had to seek paid employment for the sake of their families’ survival. Or because they wanted to Do Their Bit in a desperate time for the nation. Or because they wanted to leave their parents’ home and get involved in exciting employment possibilities. 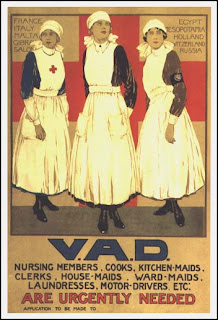 Government encouragement made the workplace accessible, gave the industrial environment respectability and encouraged a choice of industrial employment. In Britain nursing services like the Queen Alexandra's Royal Army Nursing Corps had started before WWI. But from 1914 on, recruitment for the Voluntary Aid Detachment (VADs), in particular, intensified. Posters across Britain stated that ward assistants, ambulance drivers and kitchen staff were urgently needed. These brave women were allowed in the front line within one year of the war starting (1915) and increased their skills so quickly that professional staff started to admire the VADs' contribution. 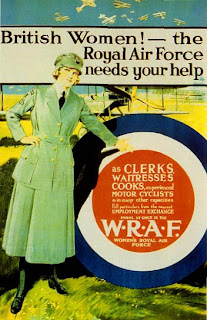 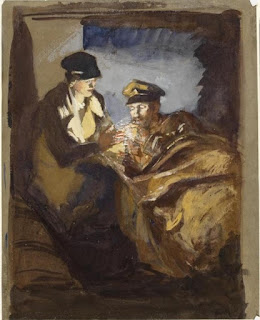 In an Ambulance: a VAD lighting a cigarette for a patient c1917
by Olive Mudie-Cooke
Imperial War Museum

While older or less confident women were often involved in voluntary work eg serving at the Red Cross, the majority of young women took over real jobs that men had done. They worked in munitions factories, offices and large hangars used to build aircraft. Did the unions, who had fought for male workers’ rights against brutal capitalist opposition for decades, support women workers as vigorously? It would seem not, especially in the important highly skilled industries like engineering and ship building. Perhaps the unions already predicted the end of WW1 and wanted to ensure that every soldier would have a job to go back to. In any case, where unions did allow women to take over skilled jobs, the employers had to agree to sack the women as soon as the war ended. 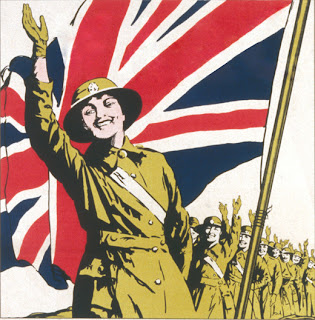 Poster, WAAC, every fit woman can release a fit man

The Women’s Army Auxiliary Corps (WAAC), which started in July 1917 with Dr Mona Chalmers-Watson as the Chief Controller, was the star attraction for women. Recruitment posters for the WAAC proclaimed that “Every fit woman can release a fit man”, and not surprisingly, endless numbers of women responded. But even life in the WAAC was not a doddle. In the lower ranks, unskilled work was paid at the rate of 24 shillings a week while shorthand typists could earn twice as much. Although uniforms and accommodation were free, money was deducted each week for food.

There was no work that women in the WAAC and other sites could not do. The Imperial War Museum has photos that show women doing heavy, dirty or even heart breaking work eg members of the WAAC's tending the graves of Allied soldiers. When compulsory male conscription was introduced in 1916, a competent female workforce became even more important. Restrictions that had denied access to particular trades were forgotten for the rest of the war, and women did work they were previously thought incapable of eg coal hauling and ship building. 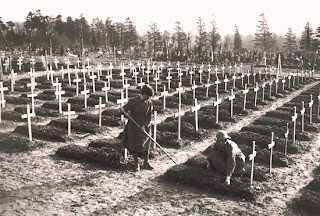 In Canada, recruiting of women intensified. Women trained to be munitions workers so that they were ready to move into factories; Canada could answer the call to nationalism with her Dependables.  Thousands of other women were helping with agricultural work via Canada’s Women’s Land Army. “The world with difficulty accustomed itself to the thought of women facing real danger and doing arduous work”. No occupation, including quarrying and mining, should be considered closed to women as “every one knows that the Canadian woman is a real Dependable!” She served her nation and the British Empire.

In Australia WW1 was a genuinely liberating experience for many women;  it made them feel useful as citizens and it also gave them the freedom and the wages only men had enjoyed so far.  Women joined the workforce between 1914-18 in Government departments, public transport, the post office, as clerks in business, as land workers and in factories, especially in the dangerous munitions factories. Women did very well, surprising men with their efficiency and their ability to undertake heavy work. By the mid war they were already regarded as a force to be proud of, part of the glory of the British Empire. Undoubtedly, however, the Australian unions were as worried about male workers coming home after the war as were the British unions. 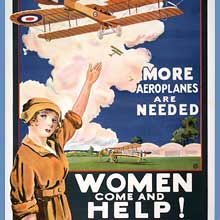 Poster, women were needed to work with planes

If ever there had been confusion about the value of women’s work in Britain and the Empire, these heroines showed that women were highly capable of learning, training and working in very different fields. Although women were still paid less than men had been pre-war, women's equality was at least on the agenda by war’s end. The women workers had helped to save their nation in time of need, had improved their own individual lives and were changing the notion about women’s role in society.

The really radical question was not “were women allowed to work in real jobs during the war?” but “what happened to those women once the war ended?”

Lucy Noakes suggested that the proposed emigration of large numbers of single women to the Empire in the aftermath of WW1 was one of the main ways Britain got rid of its "excess" single women. Although they had worked during the war and contributed enormously, they were a national embarrassment by 1919. They were forced to leave their exciting, meaningful jobs and were asked to go into domestic service. Worse still, so many men had died in the trenches in France and the Lowlands that these excess women would never find husbands or have babies in Britain.

Noakes said that women who refused to go into domestic work were vilified by the press as “ruthless self seekers, depriving men and their dependants of their livelihood”, or “leeches and parasites determined to have the time of their lives at the expense of the returning men and of wider society”. Women who had served in uniform were often depicted with particular venom. “Those women were bold and masculine, cigarette smoking.., with a loss of grace and charm”.

Thousands of women were asked to emigrate from Britain for new lives in Canada, Australia and New Zealand. And although British women were willing to do exactly that (see the lines at Australia House in London), the irony was that these New World nations actually wanted women to be domestic servants and simple labourers for farms. Again! Once the soldiers returned home from Europe, these New World countries did NOT want female engineers, aeroplane makers and repairers, ambulance drivers or ammunition manufacturers taking the men’s jobs. 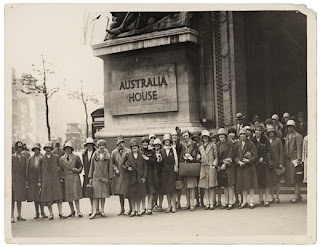 Single working women queued up at Australia House, 1919, to emigrate

Did the British manage to offload their unwanted women workers? Did Australia, Canada and New Zealand give them new homes, husbands and meaningful jobs? It would seem not. The British government launched the Free Passage Scheme in 1919 for ex-servicemen and their dependants. But by 1922, when the scheme closed down, only 5% of the migrants had been single women with years of working experience during WW1.

While Noakes judged the Free Passage Scheme a failure, based on the small number of working women who participated, others have pointed out that working  women's participation was never the primary aim of the scheme.

Did anyone take up the Free Passage Scheme offer for a new life, away from war torn Europe? Great opportunity, but imagine never seeing the family again.

The objects of the Empire Settlement Scheme were a] to build up the strength and wealth of the Empire as a whole, by distributing population from Britain and to the Empire and b] to relieve the labour market in Britain in times of post-war depression and unemployment.

The British Government started the programme in 1919 for ex-servicemen and women who wished to emigrate. Was it popular with Brits? Yes indeedy. 800,000 people were assisted to emigrate from Britain in that year alone!

Hello Helen:
The First World War did indeed change the lives and aspirations of women significantly and, in the great scheme of things, nothing was ever the same again. This is a most interesting account of these most extraordinary of times.

In our gardening days we gave training opportunities for women who wanted to make a career in horticulture through an organisation called the Women's Farm and Garden Association which had been born out of the Women's Land Army. The Association is still thriving and gives practical assistance to those women who are wanting to retrain for a new career or to just explore what horticulture can offer.

Until a week ago, I thought the Women's Land Army was an (important) end unto itself. Now thanks to you and to Edwardian Promenade, I am discovering more:
1. the Women's Farm and Garden Association,
2. Studley Horticultural & Agricultural College for Women,
3. Women's Agricultural and Horticultural International Union etc

The women were well trained, committed to the success of their industry and hard working. They should have been well respected.

'tis! I wonder how many single, working women find decent homes and meaningful employment in Canada, Australia and New Zealand after the war.

Extremely interesting post, Hels. I think WWI was a turning point in terms of women's equality. The immense needs in war-torn countries left no option but to get women working in men's jobs simply because there were no men around. Perhaps it was because there were no men around that women could take it upon themselves to assume an equal role.
When the war ended, the upset pre-war status quo was attempted to be re-established, but the process was too far advanced to reverse. The changes in the 1920s in terms of politics, employment, even fashion paved the way for further advances for women in WWII and beyond.

agreed. Britain, Australia and Canada vigorously recruited young women to take up important jobs and to free men for the war. And women vigorously took up the challenge and loved it.

My dilemma is what happened from January 1919 on. The mud had barely dried in the trenches.. and already working women were being called parasites, family wreckers and masculine creatures. What happened to "thank you sisters. You saved our nations in desperate times"?

We Also Served is a social history of women's involvement in WW1 by Dr Vivien Newman. In August 1914 a mere 640 women had a clearly defined wartime role. Ignoring early War Office advice to 'go home and sit still', by 1918 hundreds of thousands of women from all corners of the world had lent their individual wills and collective strength to the Allied cause. As well as becoming nurses, munitions workers, and members of the Land Army, women were also ambulance drivers and surgeons; they served with the Armed Forces; funded and managed their own hospitals within sight and sound of the guns. This book lets these all but forgotten women speak directly to us of their war, their lives, and their stories.

thank you. The only surprise to me was that socially privileged women found ways to help out behind the frontline. Intuitively I would have guessed that working women wanted to be most involved while privileged women might have given their estates over to the army or hospitals to use.

For a sensitive analysis of the WAAC care of the British soldiers' graves in France, see Edwardian Promenade
http://www.edwardianpromenade.com/war/wwi-wednesday-the-care-of-the-dead/

As well as collecting the official war artists' work, The Imperial War Museum also commissioned its own artists, several of them women selected by its Women's Work Sub-Committee. So I have added a small watercolour painting by Olive Mudie-Cooke, a volunteer nurse and ambulance driver on the western front and in Italy.