I saw the catalogue William Nicholson, British Painter and Printmaker 1872-1949, but only took notice of this artist because he went on to become Ben Nicholson’s father.

No starving artist was William Nicholson. He was born into a prosperous Nottinghamshire family who made their money from the ironworks that specialised in agricultural machinery. When William was in primary school, his father was elected a Tory MP and a year later the son was sent to a classy boarding school.

Luckily for William, the nightmare of being in a boarding school was relieved by the intervention of the drawing master who encouraged and coached the lad. Eventually the young man went to Paris to study life drawing at the Académie Julian, only recently the home of founder members of the Nabis, passionate about Gauguin’s art. For William, the Louvre was another French joy where he developed an interest in C17th Spanish painting, making copies of a Velásquez’s works.

My interest in William Nicholson was piqued in relation to WW1. Although not necessarily a painter of modern life, a number of works relating to the war suggested he understood the mechanisation of slaughter very well. Thus the very large painting called Canadian Headquarters Staff, with its group of officers semi-posed against a backdrop-photograph of the bombed-out Cloth Hall at Ypres, became very important.

Firstly it was commissioned in 1917 as part of a commemoration of Canadian sacrifice and heroic effort in the Great War. The painting, on loan in 2004-5 to the Royal Academy from the Canadian War Museum in Ottawa, had never been exhibited before outside Canada.

Secondly it was huge (2.4 x 3.1 ms), cleverly designed and not at all absorbed with nationalist glamour and theatrical drama. If the commissioners of the painting had hoped to see glorious Canadian soldiers on rearing horseback a la Napoleon, they would have been sorely disappointed. 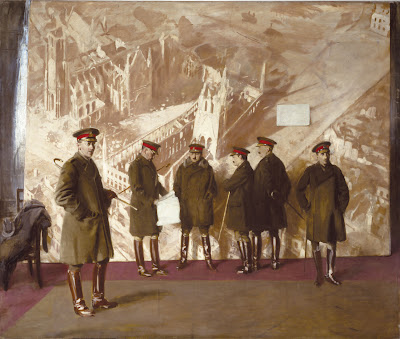 I would love to see the original brief – what did the commissioners of this painting want Nicholson to depict? What did they hope the painting would say to its Canadian audiences? The painting, originally commissioned by Lord Beaverbrook but quickly forgotten, was rediscovered in the vaults of the Canadian War Museum. Nicholson captured the officers in the moments before they sat for an official portrait. Unconventional for the officers' ordinary stance, it has been argued that Nicholson may have viewed his subjects with cynicism. Well, YES! But we don’t even know if the painting was properly finished or not by 1918.

The six senior officers, 5 generals and a major, could have been about to roll up their papers and go off for a spot of tea. So what set the scene firmly in the nightmare of WW1? Their uniforms of course, smart, polished and clearly Canadian. And behind their heads was a full length backdrop on the wall. The Cloth Hall of Ypres behind them was a still from the dreadful newsreel of destruction and misery that had shocked the world. In sepia.

William Feaver wrote “what Nicholson was at pains to suggest could only be that the generals’ responsibilities were, so to speak, their backdrop. Cause and effect loomed over them. Their troops had proved themselves at the Second Battle of Ypres, in April 1915; they had been the first to suffer onslaught by poison gas; Ypres had become a ruin. And here, in his studio, with his civilian hat and coat laid on the chair at the left, Nicholson created a war tableau devoid of both poignancy and bellicosity”.

The Telegraph said he painted in a bravura style that we associate with late Victorian and Edwardian artists such as John Singer Sargent. So historically, William belonged at the tail end of the C19th's dialogue between painting and photography, not at the beginning of the C20th's analysis of the nature of visual, spiritual and psychological experience.

Yet … yet…. William was still working on the picture when, a month before the war ended, he learned that his own son Tony had been killed in battle. Nothing can ever prepare parents for the death of their child, even in war time. So perhaps Feaver was correct; the generals paraded not authority but wariness. The generals KNEW what ordinary mothers and fathers could only FEAR.

Nicholson was knighted in 1936. All in all, we assume he would have happily given his knighthood back, if only it would have brought his son Tony back to life.

Such an interesting post about Nicholson and the Canadian Generals. As a Canadian I know the vital role that WWI served as a "coming of age" moment, awakening an identity separate from that of Empire and Great Britain.

I am also Canadian. The Canadian War Museum has an excellent history page that does deal with Lord Beaverbrook and with the Group of Seven artists. But nothing about William Nicholson.

Canadian too. I've got this picture in my scrapbook but I never knew who painted it. Thanks Hels

That coming of age moment was so true - Canada sent more people than any other country of the British Empire (620,00 Canadians served overseas) yet it was a struggle to run their own military. It took until 1917 before a Canadian was allowed command the corps.

This was very similar to the experience in Australia where we became a sovereign state in 1901 but we became a real nation on the battlefields of Gallipoli (1915).

true that! But you found a good reference that might be handy for readers. Canadian War Museum: Canada's War Art
http://www.warmuseum.ca/education/online-educational-resources/dispatches/canadas-war-art/

I am well impressed that you have this 1918 painting in your scrapbook. Like all of Lord Beaverbrook's WW1 collection, it seems to have been hidden in a vault for decades, only coming to most Canadians' attention in the 1971 and only coming to world attention in 2004-5.