It stands to reason that some nations profited immensely from the unexpected arrival of brilliant musicians and artists who fled Nazi Germany and Austria from 1933 on.  I certainly knew all about the visual artists from Nazi-controlled countries. But what happened to the musicians who were still in Germany before the war and what happened to those who came to Australia? 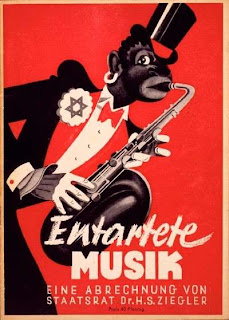 Because the Dusseldorf curator in 1938, Dr Hans Ziegler, was an expert on theatre and was not a musicologist, he had no idea what “degenerate music” meant. But he was a very loyal member of the Nazi Party and did his best. Ziegler decided that a simple chord structure was inherently Germanic and natural. And anything which departed from tonality was basically Jewish and therefore degenerate. Hitler believed that music had absolutely immense power and that with music, a human personality could be shaped. Thus Dr Ziegler also thought that music was powerful, and that they needed to mould their fellow citizens along approved cultural lines.

The 1938 Degenerate Music Exhibition included works by Jewish composers or those with Jewish parents or grandparents (eg Felix Mendelssohn, Arnold Schoenberg, Kurt Weill, Gustav Mahler), by socialists, by modernists and by jazz musicians. Why a right winger like Igor Stravinsky was included as a degenerate eludes me, but he was just as reviled as the Jewish and Jazz musicians were.

For this event, a small catalogue was published that included the opening-speech by Ziegler and Goebbels, quotations of Hitler's words, photographs, caricatures and paintings as they appeared in the exhibition.

Dr Ziegler must have done his job well. After Dusseldorf, the Degenerate Music Exhibition travelled to Weimar, Munich and Vienna, where the displays continued to be very popular. 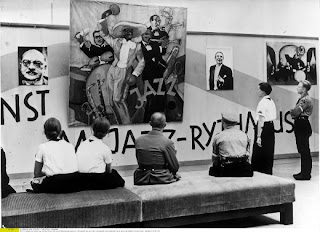 No musician was safe from scrutiny or Nazi re-branding. In his recently published book Mozart and the Nazis: How the Third Reich Abused a Cultural Icon, Erik Levi explored the way in which the Nazi regime manipulated Mozart's music for political gain. Puccini and Verdi seemed to have been subject to a similar appropriation.

Now let us leap forward to the 1980s. Dr Albrecht Dumling is a Berlin-educated musicologist who was responsible for Entartete Musik in 1988, a reconstruction of the Nazis’ Degenerate Music Exhibition in Dusseldorf fifty years earlier (in 1938). How perfect that the reconstruction opened, of all possible places, in the Dusseldorf Tonhalle. The exhibition travelled to other countries, but alas did not come to Australia.

In 2003-4 the same Dr Dumling used the National Library of Australia’s music and manuscript collections to document both the personal experiences of refugee musicians and their professional contributions to the musical life of Australia. In his new book The Vanished Musicians: Jewish Refugees in Australia, 2011, he discussed the reception Australia offered to German-speaking refugee musicians who arrived in Australia from 1933 on. 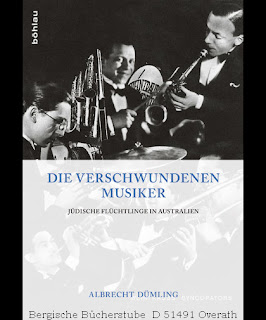 Australia should have felt blessed when world-famous Jewish musicians arrived on our shores. Consider Jascha Spivakovsky and the other two members of the trio (Nathan Tossy Spivakovsky and Edmund Kurtz), Artur Schnabel, Richard Tauber and Yehudi Menuhin and the conductor Maurice Abravanel. German born and educated Felix Werder was only 18 when he was imprisoned on the Dunera ship in 1940, so his splendid works, including his symphonies, chamber music, choral works and operas, were all written in Australia. The composer and bassoonist George Dreyfus was even younger when he left Germany in 1938, so he did all his musical studies in Australia.

How tragic that these Jewish refugees, fleeing Nazism at home, would be declared enemy-alien-Germans in Australia. Most were imprisoned in rural camps, in isolated Hay and Tatura.

The modern viewer wants to ask if at least the Musicians’ Union of Australia tried to save these professional musicians and composers during the late 1930s. Apparently not. The Musicians’ Union of Australia felt it was hard enough to find full-time work for “real” Australian citizens and applied pressure to the Immigration Department to turn foreign musicians away from our shores or put them in non-musical jobs.

The idiocy of making a truly gifted violinist become a shoe-maker must have seemed breath-taking. If a musician wanted citizenship in Australia in 1939, he was well advised to say he was a factory worker or farmer. Most did. 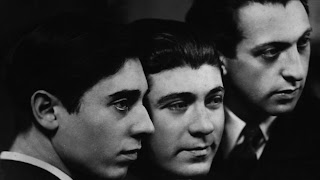 Fascinating. It seems to have been easier in Russia, degenerate music was anything Stalin didn't like! What a shame about the refugees fleeing to Australia, I doubt if Britain was any better, though America seems to have been a better destination.

I'll go with Stalin. Degenerate music is anything I don't like. Vaguely connected to your post, I never realised the power of music and song until I saw and heard Tomorrow Belongs to Me, in Cabaret. I thought to myself, so that is how it can happen, as easily as that. The You Tube clip is here if anyone hasn't seen it http://youtu.be/LNMVMNmrqJE

Hello Helen:
This fascinating post highlights yet another example of the total evil of the Nazi Party during the 1930s and 1940s and which, some seventy years later, fills one with horror at man's inhumanity to man. That any refugee, let alone those with such considerable talent, should be treated with so little respect for the individual by the Australian government of the time, and doubtless many other governments as well, is more than a little shaming.

Personally, we find the very idea of any of the arts as being labelled degenerate quite beyond belief; one may not like certain things but that is a matter of individual taste.

With the hundreds of Bauhaus staff and students (closed 1933), I DO know where they went. Most moved to Netherlands or Britain first, and then after a few years were accepted, hopefully, in the USA. Only one of the Bauhausers arrived safely in Australia.

With musicians, I wonder if there is a list somewhere of emigrees who were given safe haven outside Germany and Austria.

I know EXACTLY what you mean. And so did the Nazi musical experts. They believed that all music could be powerful, and that people needed to be carefully guided. Otherwise even decent people might be seduced by the power of bad internationalist music, instead of being entranced by good German music.

Their base premise might have been faulty, but their subsequent logic was impeccable.

Tomorrow Belongs to Me is a great example of how normal citizens (I include myself in that) can be swept up in a group response. Have a look at Hatikvah, the Israeli national anthem. I have listened to it every week of my life, and still immediately burst into tears.
http://www.youtube.com/watch?v=_IuHgBQcbKs

The original article by Dumling is fascinating and I can see why it attracted your attention. He did a public lecture on it only last month.

This site is good:

I traced some musicians to America and I was wrong - most took years to recover their professional positions if ever. As elsewhere those already there resented their influx and hardly ever helped.

Agreed. The Évian Conference in France got together in _July 1938_ to discuss the issue of increasing numbers of Jewish refugees fleeing Nazi persecution. Representatives from many rich, New World countries discussed the situation and most decided their populations were too large already.

The US and Britain, the greatest hope for protection, agreed to immigration quota of 30,000 a year each. Canada, France and Australia refused to make any specific commitment. Only the Dominican Republic and Cuba responded morally.

In July 1938, escape was still possible. One year later, the borders were closed and peoples' fate was sealed.

that is a very useful reference, thank you. I knew quite a lot about internment on the Isle of Man from 1940, but not about individual musicians.

I gave a conference paper on this very topic a couple of years ago, and had the biggest crowd that I have ever seen at a conference. People were fascinated (in a grotesque sort of way).

Emigre composers are nicely covered in Suppressed Music. It was written by The Jewish Music Institute, University of London.

"Jewish musicians were perhaps Germany's and Austria's most important living cultural assets. Jewish musicians were equally active in the established and avant garde music scenes. Of c70 composers who came to the UK to escape Nazi persecution between 1933-45, some remained permanently while others stayed only a short time before moving on to the Americas, South Africa and Australia."

eg As a refugee Berthold Goldschmidt initially struggled to find paid work in London, but by the end of the War he was musical director of the German section of the BBC European service (1944-47), and soon re-established himself as a conductor...

Although the Nazis were the most extreme, it strikes me that reactionary conservatives everywhere still want to suppress the arts and render them less powerful. The methods are less appalling for the artists, I think, but no less effective vis the arts.

Chris,
you have been proven right in society after society.

Yet why would that be so? After all, who goes to art galleries, orchestral performances, theatre? Largely the middle classes, I assume. If conservatives were concerned about controlling working families, why go for the rather elitist arts?

Because the middle classes are more influential?

Sometimes the Nazi arbiters, with all their ideological fervour, still got it wrong. Emil Nolde was a passionate card-carrying member of the Nazi Party, yet it didn't help him; he was declared a degenerate artist anyhow. Igor Stravinsky was an anti-semitic, pro-Fascist artist who was also declared a degenerate.

That was one thing Hitler was right about. Music has immense power. But I don’t know about a person’s personality being shaped part.

interesting that Dr Dumling agrees with you. He wrote "Hitler saw himself as an artist. He even wrote an opera libretto; performances of Wagner's Rienzi and Lohengrin in Linz were seminal experiences for him. He wanted a cultural revolution.

Like Wagner, he believed that music had absolutely immense power, that with music, you can shape a human personality. In my opinion he rated music too highly. He thought that because music was as powerful as drugs, it should be equally strictly controlled."